We’re pretty sure filming the opening scene of Wayne’s World was a lot of fun for the actors – they literally got paid to jam out to “Bohemian Rhapsody.” But before the scene made it to the big screen, it had to get the approval of the band it was honoring, Queen. Singer Freddie Mercury himself loved the scene, and here’s what he had to say about it.

What started as a skit 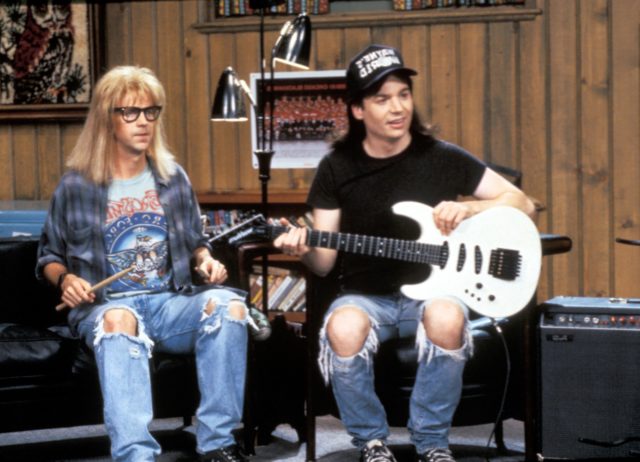 Wayne and Garth sitting on the couch as they host their public access television show, “Wayne’s World” in the 1992 film that shares the same name. (Photo Credit: Paramount Pictures / Zayne / movieStillsDB)

Wayne’s World became a film based on the Saturday Night Live skit that featured Mike Myers and Dana Carvey as the hosts of a public access cable show filmed from Wayne’s parents’ couch. Sound familiar? The movie borrowed a lot of elements from the SNL skit to keep true to the original characters and their interest in rock and roll music.

Some of the lines were even improvised in the film as they were on SNL, like when Garth asks Wayne, “did you ever find Bugs Bunny attractive when he put on a dress and play a girl bunny?” while they’re sitting on the hood of their car. Those laughs from Myers were real, because who could’ve expected Carvey to say that during that scene?

The film only took $14 million to make and made over $100 million at the box office, quickly making it one of the highest-grossing SNL sketch-turned-movie concepts. Other notable SNL skit-movies include The Blues Brothers (1980), and Night at the Roxbury (1998). 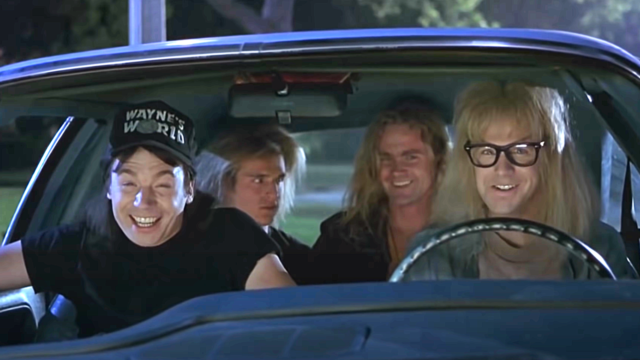 Released in 1992, Wayne’s World debuted in theaters on Valentine’s Day, and despite not being a very romantic film, was a major box office smash. Audiences were excited to see Wayne and Garth on the big screen, and the film focuses on the two rock-obsessed friends as they try to save their show from being taken over by a large production company.

The opening scene for the film showcases Garth picking up Wayne in his AMC Pacer, alongside crew-members Terry and Alan. They also pick up another friend, Phil, along the way. When Wayne gets in, he suggests they play the “Bohemian Rhapsody” tape and all of the boys begin to sing dramatically along to the six-minute long rock anthem. As the song progresses, they begin to rock out harder and harder to the iconic song. 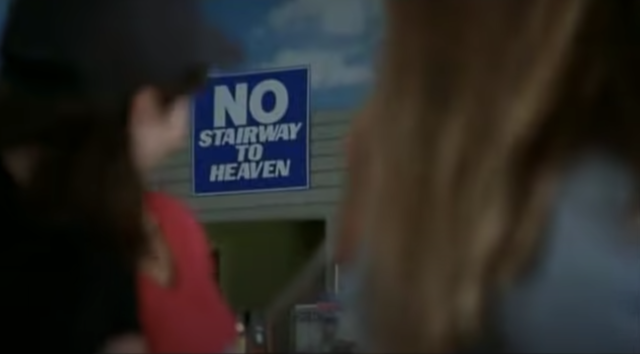 From the scene in the guitar shop, a sign reads “No Stairway to Heaven” in the 1992 film, Wayne’s World. (Photo Credit: Lycrius / YouTube screengrab)

Originally, producer Lorne Michaels wanted the song to be from the band Guns ‘N Roses, but Myers insisted on “Bohemian Rhapsody.” He recalled driving around and singing along to the song with friends as he was growing up in Toronto. Going against the studio’s wishes, he called Queen guitarist Brian May to see if he could send the opening clip to him and possibly get the approval of the band before the film’s release the following year.

The studio ran into fair use law issues for some of the music that was referenced in the movie, so it was important to get the band’s approval not only for Myers, but for legal reasons too. The iconic line, “No stairway! Denied!” actually came from these fair use laws. Director Penelope Spheeris said, “Stairway to Heaven” was limited to, I believe, three notes, then we cut it back to two notes, then the studio went back and cut it down even further.” Good thing too, because the joke became a favorite catchphrase for fans.

Freddie’s reaction to the scene 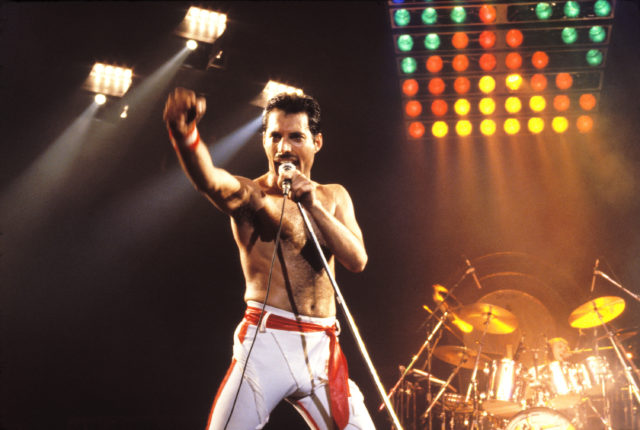 Reflecting on the event at a reunion with members of the Wayne’s World cast including Myers, May remembered that “You, Mike, did get me the tape, a VHS or something, I think, and I took it round to Freddie not long before he went and showed it to him, because you said you wanted to have that approval.” May explained how at the time, Freddie Mercury wasn’t doing very well as he was weak from complications due to AIDS. Nonetheless, Mercury enjoyed the clip.

Mercury did give Myers his approval. “He loved it, he laughed and laughed. He was very weak, but he just smiled and laughed, and said ‘Yeah, how wonderful is that,'” recalled May. Mercury died shortly afterward, in November 1991. He was just 45.

The film’s success at box offices provided Queen with a resurgence of fans from America, and before Mercury passed away, he knew the effect the film was going to have on the band. It brought Queen back to America. Although he never got to see it for himself, he was appreciative of the exposure he knew the film would provide.

The decline in Freddie’s health 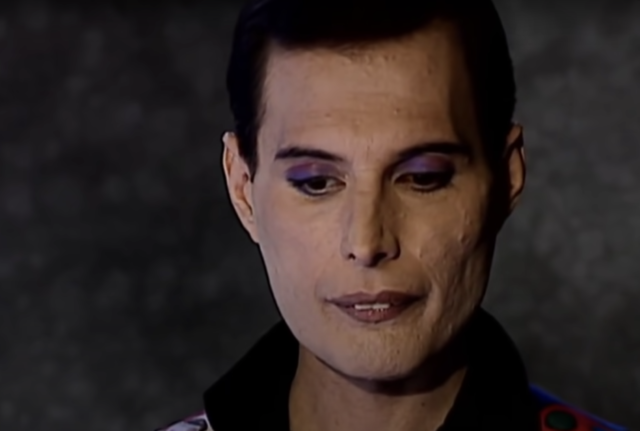 Freddie Mercury performed in the music video for “These Are The Days of Our Lives” by Queen the same year he died. He looked gaunt, but the performance was still magical. (Photo Credit: HYPEN / YouTube screengrab)

Long before his death, Mercury showed signs of infection from AIDS but did not seek a diagnosis. Instead, he ignored his symptoms. It wasn’t until his girlfriend, Mary Austin, encouraged him to seek medical attention after a mark on his hand had gotten progressively worse that he finally found out the truth.

Mercury suffered from the illness for a long time, and spent the last two years of his life in isolation from the public eye. He kept his illness secret from the world, allowing only a few trusted friends to know about his AIDS diagnosis. As his illness became worse and worse, Mercury ultimately decided to stop taking his medication. That same month, he passed away.

Success from the biopic 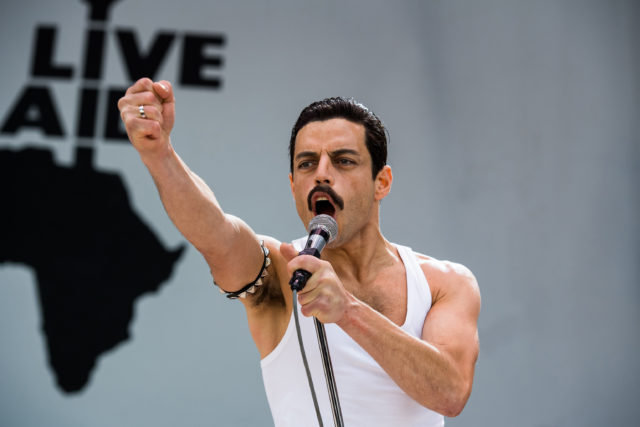 Queen has seen ongoing success following the death of their frontman, continuing to perform in honor of Freddie Mercury with new lead singer Adam Lambert. Additionally, the biopic film, Bohemian Rhapsody, since its release in 2018, has provided Queen Productions Ltd with almost £200 million in revenue. Shared equally between surviving band members Brian May, Roger Taylor, John Deacon, and the late Freddie Mercury’s estate, each took home an over £70 million payout.

More from us: Mike Myers Received A Shagadelic Message From George Harrison On The Day He Died

The titular song, “Bohemian Rhapsody,” has also continued to provide the band with ongoing success and is the most-streamed song of the 20th century. It has been listened to nearly two billion times.