Born in 1885, Clementine Ogilvy Hozier grew up in a complicated family dynamic. Her upbringing, and her marriage to Winston Churchill, would come to define the type of woman, wife, and mother she was. Always in her husband’s corner, Clementine Churchill shared a long and successful marriage with Winston, if at the expense of her relationship with her children. She exercised a quiet political influence over her husband, one which she wished she could have employed in full force had she been born a man.

Clementine had a complicated childhood 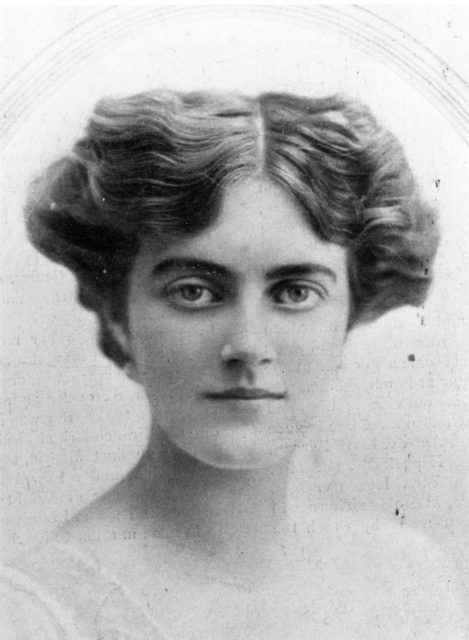 Clementine was the daughter of Sir Henry Hozier and Lady Blanche Hozier, two aristocrats with a notoriously bad relationship. The two hated one another, and Lady Blanche was infamously unfaithful. So unfaithful, in fact, that a rumor had gone around that all five of their children were not fathered by Sir Henry, but by his brother, Algernon Bertram Freeman-Mitford.

In 1891, when Clementine was six years old, her father divorced their mother and abandoned the family, leaving them with no money. Lady Blanche was as notorious for gambling as she was for philandering, and so Clementine time spent much of her childhood traveling in order to evade creditors.

Growing up in this broken family meant young Clementine was often isolated. She had siblings, but her troubled childhood resulted in a struggle with anxiety and depression later on. This was exacerbated by the loss of her older sister, Kitty, who died from typhoid fever. Clementine and her other sister, Nellie, were sent to Scotland to live with their aunt when Kitty became sick, not realizing they were never going to see her again. This affected Clementine deeply.

When Clementine and Winston met 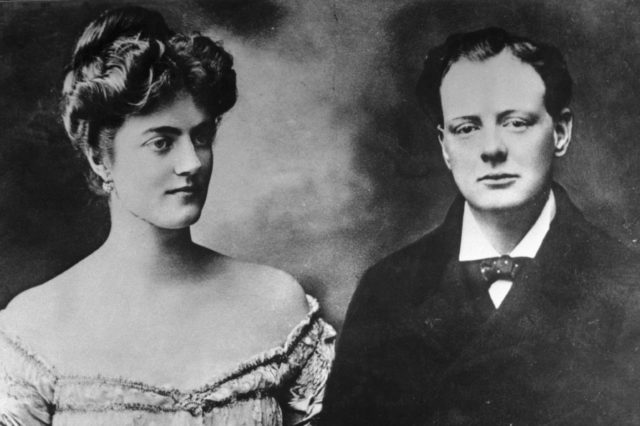 Sir Winston Churchill, Britain’s elder statesman and prime minister, is shown here with his then-fiancee, Miss Clementine Hozier, in a photo made a week before their marriage in 1908. (Photo Credit: Bettmann / Getty Images)

Lady Blanche was frightened that her bad reputation would rub off on Clementine and so she put off her debut into society. Instead, her wealthy aunt took on that responsibility when Clementine moved in with her. Now a part of the aristocratic social class, Clementine could mingle.  She became secretly engaged two separate times to the grandson of former Prime Minister Sir Robert Peel. The engagement never worked out, which is good because soon she met Winston Churchill.

The first time Clementine met Winston was at a party in 1904 held by shared acquaintances of theirs, the Earl and Countess of Crewe. She was just 19 years old, and Winston was 10 years her senior. At this point, Winston was already a member of parliament who had gained notoriety for his escape from captivity in the Second Boer War. When the two met, Clementine wasn’t too impressed with him. She once said, “Winston just stared. He never uttered one word and was very gauche.” Nothing ever came of their meeting at the party.

Thankfully, the two would meet again at a dinner party in 1908, held by a distant cousin of Clementine’s, where they were seated next to one another. This time, Clementine liked Winston a lot more, and he liked her, too. They began a courtship that lasted a few months and the two were married in September of 1908. 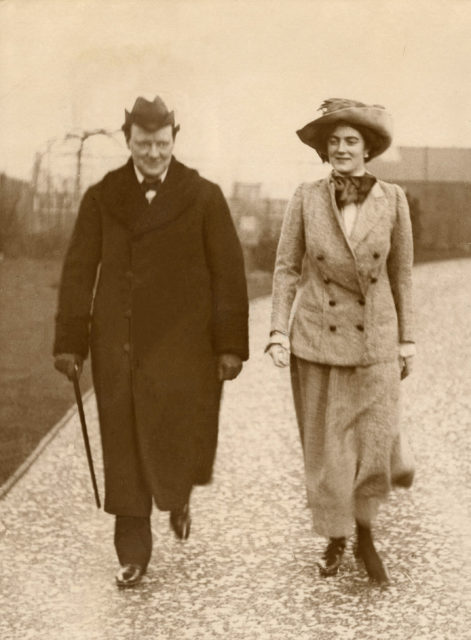 One year into their marriage, Clementine physically saved Winston’s life. In November of 1909, Winston was traveling to Bristol with Clementine to greet local party members during a routine political stop. When they arrived on the platform, Theresa Garnett, a militant suffragist, attacked Winston with a dog whip, lashing him in the face.

Winston was grappling with Garnett when she pushed him, causing him to lose his footing. The suffragist also pushed him in front of a moving train. But Clementine acted quickly. She pushed her way through the luggage in front of her and literally grabbed her husband by his coattails. This saved his life. 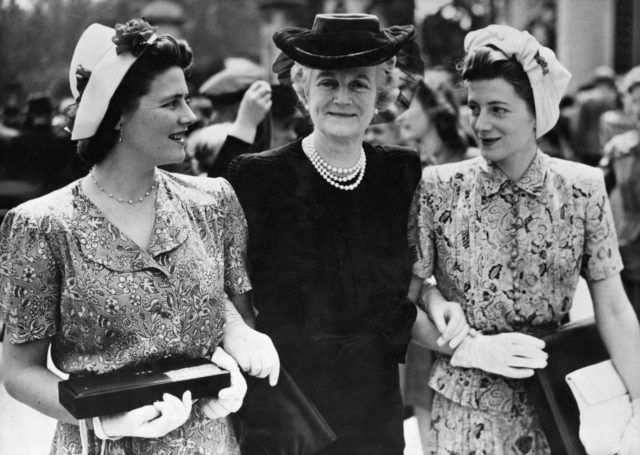 Clementine Churchill, Winston Churchill’s wife, with her daughters, Mary and Sarah after her investiture by the Queen at Buckingham Palace, where she became a Dame of the British Empire, 1946. (Photo Credit: Hulton-Deutsch Collection / CORBIS / Corbis / Getty Images)

Clementine and Winston had five children together, many of whom led difficult lives. Their eldest daughter, Diana, ended her life with a drug overdose. Their son Randolph also struggled with mental health. Their daughter Sarah married three times, once without her parents’ knowledge. Their daughter Marigold died at the age of two, causing deep trauma to both Clementine and Winston. When their youngest daughter, Mary, was born, they decided they would raise her differently and had a relative step in as nanny. Mary was the only of their children not to struggle with drugs or alcohol.

Unfortunately, Clementine and Winston spent much of their time away from their children in order to focus on Winston’s political career. Clementine threw herself into supporting her husband and by doing so never really made any deep connections with her children. Her persistent anxiety also contributed to the distant relationship she had with her children. 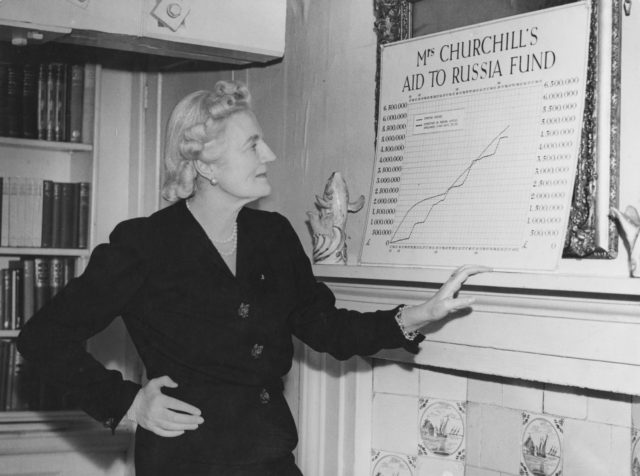 Although she was reserved and private, Clementine was not afraid to oppose her husband. She was a firm believer in the right for women to vote, unlike her husband, who actively opposed this. She was ambitious but was constrained by the society she was born into, and was aware of it. She once said, “she would have loved to have been a statesman in her own right if only she had been born with trousers rather than petticoats.”

Clementine and Winston often argued, sometimes dramatically. She once hurled a plate of spinach at him during an argument at dinner. During a breakdown in 1935, Clementine took a solo vacation where it was rumored that she had an affair with art dealer Terence Philip. But this was simply a rumor, and Philip’s sexuality was also being questioned at the time. Clementine and Winston’s marriage remained strong despite this hiccup.

Clementine was a political crutch for Winston 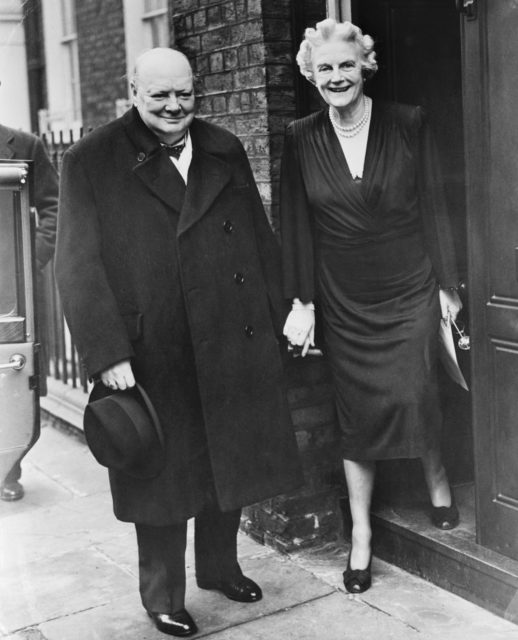 Despite their differences, Clementine put her political efforts into her husband and helped to create the statesman she wished she could’ve been. Winston once told Franklin Roosevelt, “I tell Clemmie everything,” as it was no secret that she often advised him on his political ventures. Winston also remarked that Clementine had made “my life and any work I have done possible.”

Many have speculated that without the support of Clementine, Winston may not have been able to handle the weight of two wars on his shoulders. Without his loyal wife, it may have been possible that he could not have guided the Allies to victory during WWII. She was his confidante, friend, and the love of his life. 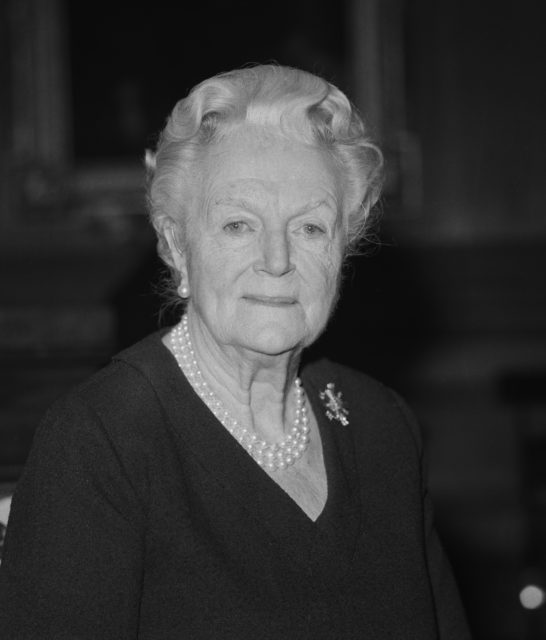 Clementine and Winston shared 56 years of marriage until Winston died in 1965 when he was 90 years old. Following his death, she was made a life peer and titled Baroness of Spencer-Churchill, of Chartwell in the County of Kent. She sat independently of any major party affiliations in parliament, but her declining health caused her from having much presence in government during her later life.

More from us: The Scandals of 7 British Prime Ministers

In early 1977, she suffered from financial troubles and was forced to auction off five of her husband’s paintings. Clementine died later that year, in December, at the age of 92. She had suffered a heart attack and was buried alongside her beloved husband at St. Martin’s Church.