Incredible Images of the Dunkirk Evacuation

Christopher Nolan’s film Dunkirk was a massive hit when it was released in 2017. It was such a hit, in fact, that it went on to become the highest-grossing Second World War film ever made. The movie was based on the real events of the evacuation of Allied forces from Dunkirk, France in 1940, and shows the perspectives of both civilians and military forces.

As engaging as the film was, there were thousands of photos taken during and after the real evacuation that captured the event and the emotions of the people who were involved. Here are 10 incredible images from the historic evacuation.

We shall fight on the beaches

Located on the French coast, Dunkirk beach was the site of a mass evacuation of primarily British troops when German forces invaded France and surrounded them. With little choice other than evacuate or surrender, Britain chose the former, attempting to get as many of their forces as possible off the beach, across the English Channel, and back onto English soil. 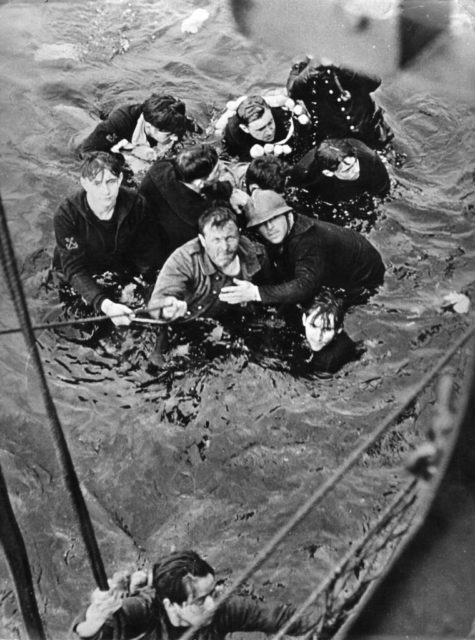 Crew members of the French destroyer Bourrasque, sunk by mine off Nieuwpoort during the Dunkirk evacuation, are hauled aboard a British vessel from their sinking life-raft, May 30, 1940. (Photo Credit: Hulton Archive/ Getty Images)

The evacuation was difficult for many reasons. One of these was the constant attack from enemy planes while troops were trying to board ships. The attacks weren’t just focused on the docks, but also on the ships that had already departed with full loads of troops. Some of the larger ships were torpedoed and others were bombed, leaving soldiers at the mercy of other vessels to take them aboard.

We shall fight on the seas and oceans

Many of the men were evacuated on large naval vessels, but they were limited to picking up soldiers from a sea wall that extended deep enough to reach the larger ships. The vessels could dock there, or send their smaller boats to shore to pick up the men, neither of which was particularly time effective. 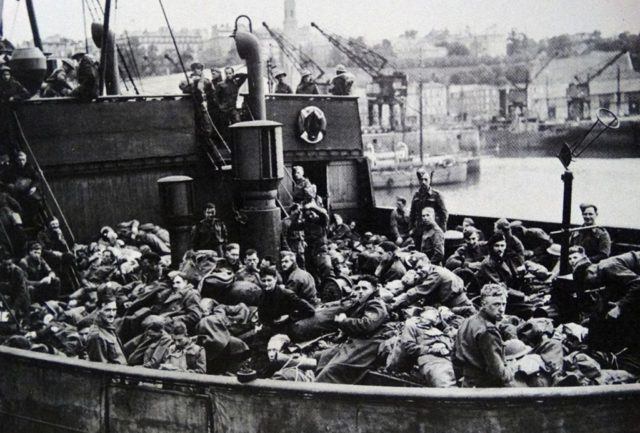 In an effort to remedy this, privately-owned boats that could sail in shallow waters were commandeered for use. These pleasure craft were taken to Ramsgate, England to sail across the English Channel to Dunkirk, by their owners, Naval Officers, or other volunteers. Very few owners decided to sail their boats across, but there were some, mainly fishermen, who did. 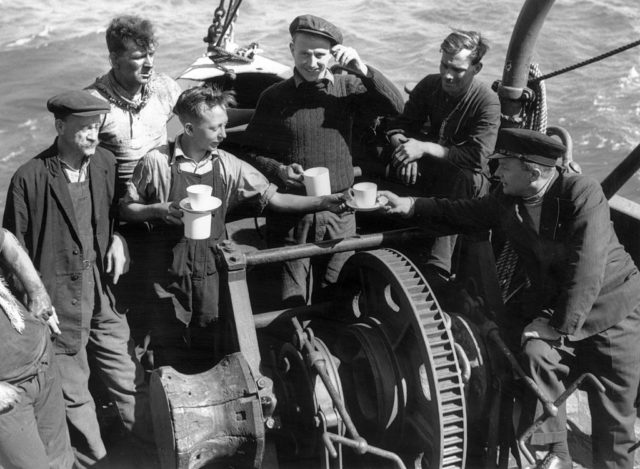 The crew of the London-based tug ‘Sunvill’ one of the many small craft which took part in the evacuation of British and allied troops from Dunkirk, June 5, 1940. (Photo Credit: Fox Photos/ Getty Images)

When they reached Dunkirk, they either operated as shuttles between the beach and the larger ships anchored in deeper water, or took soldiers back to England themselves. Throughout Operation Dynamo, there were roughly 850 private boats used to evacuate soldiers, which became famously known as the “Little Ships.”

We shall never surrender

The soldiers who made it home, whether on a large vessel or one of the “Little Ships,” were then transported by train to reception and redistribution centers throughout England. The trains were given the name “Dynamo Specials” after the codename for the Dunkirk evacuation. 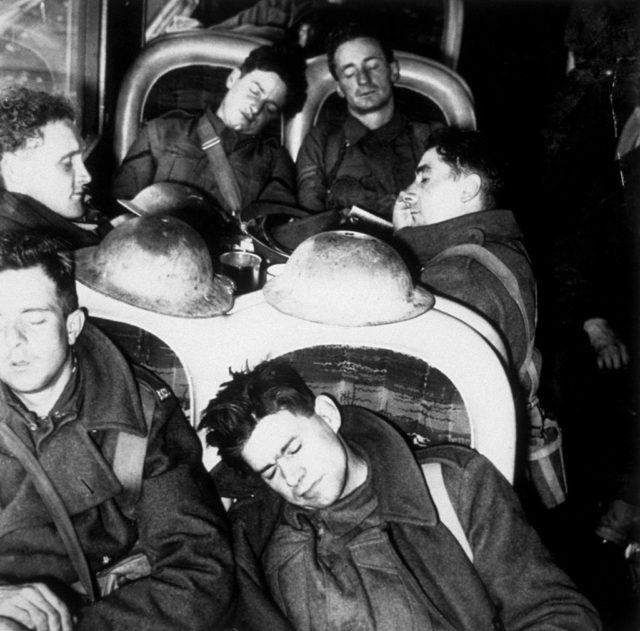 Troops of the British Expeditionary Force on board a train in Britain after being repatriated in the Dunkirk evacuation, June 1, 1940. (Photo Credit: Keystone/ Hulton Archive/ Getty Images)

The trains ran for 16 days moving troops who arrived in major ports like Ramsgate and Dover, as well as many others. Priority was given to soldiers, so many of the normal trains were canceled in order to move them. Dover, the busiest port, was said to have a train leaving every 20 minutes in order to meet the high demand. 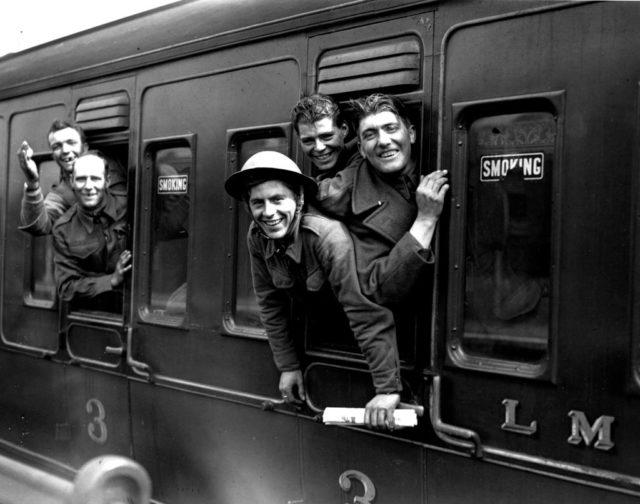 The movement of large numbers of troops was made even more chaotic by the transfer of nearly 50,000 children out of danger areas. Both of these events happened to be going on at the same time. Of all the trains used, those that were designated as ambulance trains were given priority on the rails so that they could move their passengers quickly and get them further medical attention.

We shall fight in the fields and in the streets

Given the difficult nature of the evacuation, many of the men had not been able to eat anything in the days before their return to England. Along the rail lines, official food and refreshment stops were set up to feed the men, most of whom hadn’t eaten for many days during the evacuation. The train schedule was still tight, however, and so they weren’t able to stop for long. 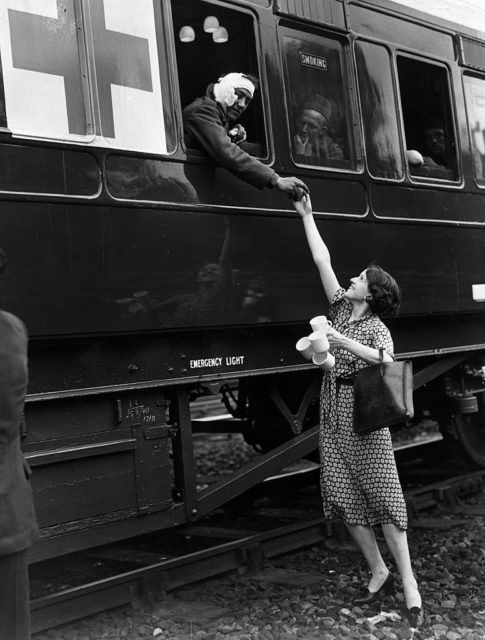 In a hospital train, a man wounded in the British Expeditionary Force retreat from Dunkirk accepts refreshment from a voluntary helper on the track, June 1940. (Photo Credit: Topical Press Agency/ Getty Images)

Volunteers, and occasionally other soldiers, on the platforms helped to serve food quickly and get the trains moving again. Reportedly at one food stop, the platform volunteers yelled “Sling them out!” and the soldiers all tossed the tin mugs they’d received out the windows to be reused for the next group. This was a big improvement from the use of china cups, which shattered when the soldiers returned them out the window. 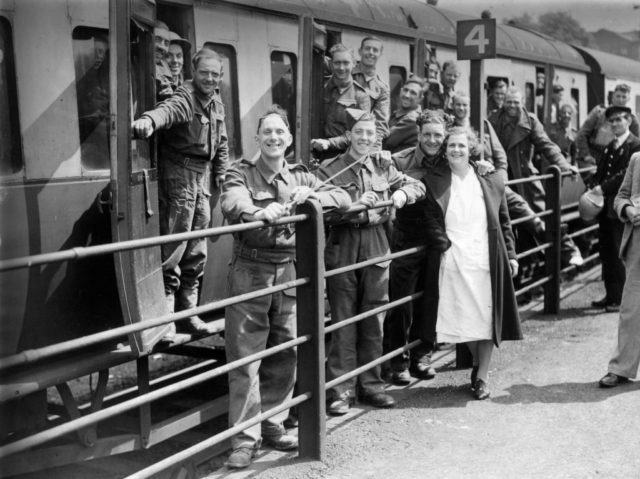 Members of the British Expeditionary Force smiling happily at a halt in their journey as they arrive safely in England after escape from Dunkirk, May 31, 1940. (Photo Credit: Topical Press Agency/ Getty Images)

Along with the boats, trains played a major role in moving soldiers back throughout England, with over 620 trains used in the aftermath of Dunkirk. They, along with the volunteers who helped on the platforms, ensured that the returning forces were moved quickly out of the major port cities to make room for other returning soldiers.

We shall fight with growing confidence

Many photographs of soldiers returning to England showcase their happiness at being back in Allied-controlled territory. Despite the horror of Dunkirk and the difficulty of the evacuation, Operation Dynamo was largely considered to be a success, far succeeding the expectations of Winston Churchill when he ordered that troops be returned to England. 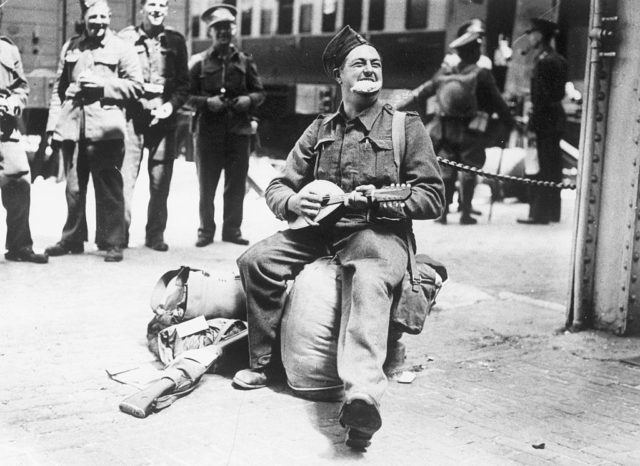 While most of the British Expeditionary Force’s heavy equipment was destroyed or abandoned at Dunkirk, the soldiers who were returned were extremely important. The forces at Dunkirk were made up of most of Britain’s experienced troops, so to have lost them would have required unthinkable amounts of time to replace and retrain. 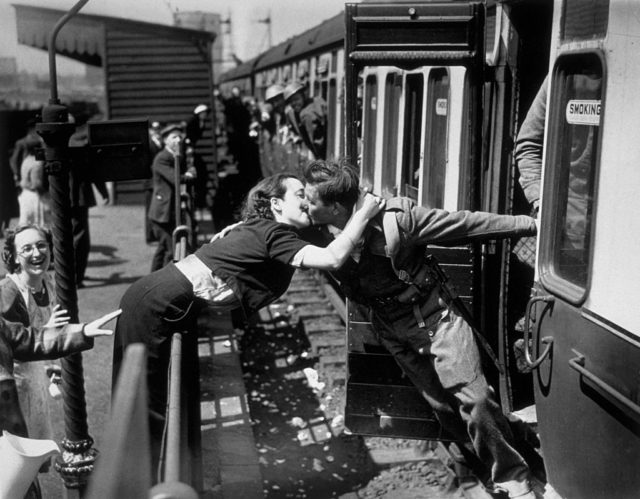 A soldier of the British Expeditionary Force, arriving back from Dunkirk, is greeted affectionately by his girlfriend, May 31, 1940. (Photo Credit: Topical Press/ Getty Images)

In fact, the successful evacuation was seen as a massive morale boost for the Allies. The “Dunkirk Spirit,” a united nation working against the enemy against all odds, became an important part of the war effort. It alludes to how the British all worked together to get their forces home.

We shall defend our island

Although it has gone down in history as the Miracle of Dunkirk, the evacuation did not end positively for all of the Allied forces. When the evacuations ended, an impressive 198,000 British and 140,000 French troops were removed from the beaches, for a total of 338,000 men. Some troops were not so lucky, however, and were taken as prisoners of war (POWs) by the Germans. 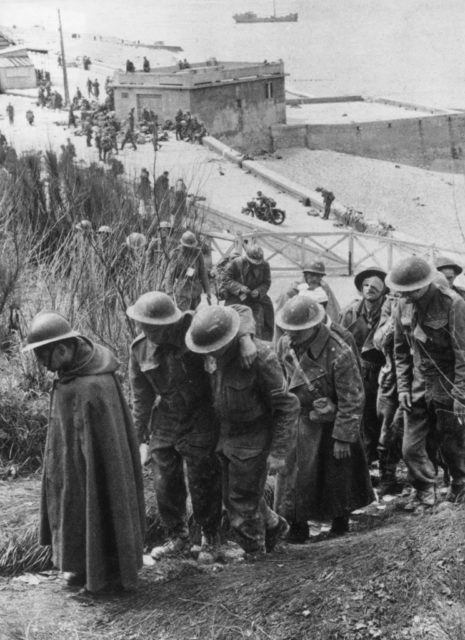 Of the British troops left behind, 11,000 died and roughly 40,000 were captured and imprisoned by enemy forces. Some of these were POWs for the entirety of the war.

While their comrades were rescued, these men were forced to endure horrific conditions at the hands of their captors, including abuse, forced marches, and starvation.