In August 1969, during the “summer of love,” thousands gathered on a dairy farm in upstate New York for three days of “Peace and Music.” The festival became synonymous with the counterculture movement of the ’60s, featuring iconic performers like the Grateful Dead, Janis Joplin and Jimi Hendrix.

While Woodstock ’69 was a harmonious celebration of peace and love, the festival’s 30th anniversary celebration, Woodstock ’99, was plagued by violence, looting, vandalism and 100° heat that led to chaos and destruction.

What began as peace and love quickly descended into chaos

Following the success of the original Woodstock festival and Woodstock ’94, Woodstock ’99 promised to be a weekend of great music and “good vibes.” Featuring performances from popular bands like the Red Hot Chili Peppers, Korn and Rage Against the Machine, the festival was also live-streamed to viewers at home. 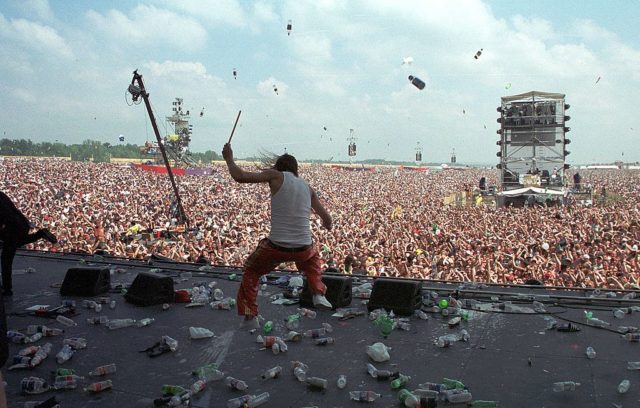 Organized by John Roberts, Joel Rosenman, Artie Kornfeld and Michael Lang, Woodstock ’69 was a free event intended to allow attendees to celebrate music and escape from the bleak reality of life.

Similar to the ’99 event, the original Woodstock faced issues regarding sanitation, a lack of food and water, and bad weather, but many believe the overwhelming number of attendees using psychedelic drugs contributed to the peace and positivity of Woodstock.

Hoping to resurrect the cultural phenomenon that was Woodstock ’69, Lang and partner John Scher organized an anniversary celebration. Rather than hold the festival at the original site in Bethel, New York, the organizers chose the former Griffiss Air Force Base. Promoters were keen on halting gatecrashers and saw the perfect opportunity to create a fortress made from a 12-foot-high plywood barrier ironically dubbed the “Peace Wall.” 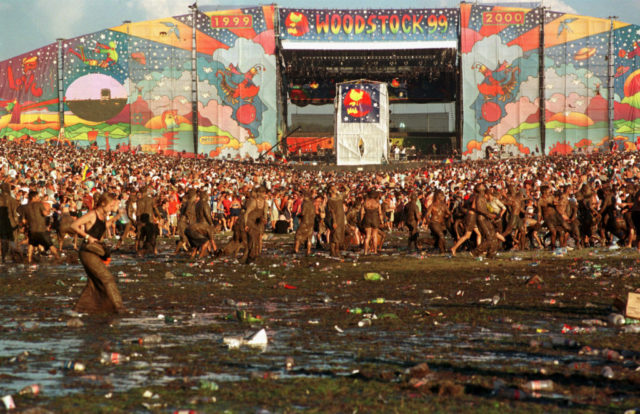 The venue featured two main stages, a rave tent and a film festival, and there were amenities like ATMs and an “email station.” Four hundred thousand music fans attended, and the facilities were unequipped to handle them. The site didn’t have enough toilets, which led to overflowing portable toilets and showers.

Food and water were overpriced, forcing attendees to stand in long lines at a water fountain until a few frustrated people broke the pipes. The busted pipes led to huge mud pits and a lack of proper drinking water. To make matters worse, the entire weekend was plagued by 100° heat with practically no trees to provide shade or green space to set up tents, thanks to the festival’s barren US Air Force base setting.

With the conditions set for a perfect storm, it was only a matter of time before things got out of control. On the Saturday night, rap-rock band Limp Bizkit was performing their hit song “Break Stuff” when the audience took the lyrics a bit too literally. Festival-goers began rioting and ripping plywood off the barricades as lead singer Fred Durst egged them on.

He did, however, also urge the audience to be safe, saying, “Don’t let anybody get hurt. But I don’t think you should mellow out. That’s what Alanis Morissette had you motherf***ers do. If someone falls, pick ’em up.” 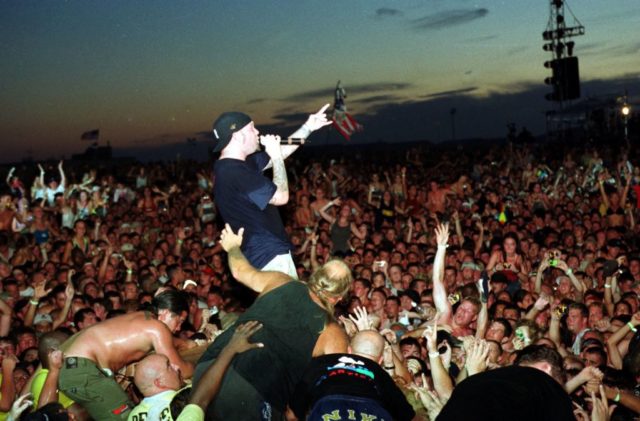 The next night, the Red Hot Chili Peppers headlined the east stage. Prior to the concert, an anti-gun violence organization handed out candles for attendees to light during the band’s performance of “Under the Bridge.” An already unruly crowd mixed with flammable materials – what could go wrong?

Halfway through the performance, festival-goers began to light their candles and used them to start fires. They fueled the blazes with empty water bottles and torn-off plywood panels – they even set an audio tower aflame! By the end of the set, ATMs had been destroyed and looted, and abandoned vendor booths were set on fire.

The “Peace Patrol” was made up of teenagers

During Fatboy Slim’s set inside the rave tent, several attendees stole a van and drove it into the side of the tent. A machete and a woman who was believed to have been sexually assaulted were found inside.

Where was festival security during this chaos? Dubbed the “Peace Patrol,” security was actually made up of a bunch of 18-year-olds recruited to help out during the event. The Peace Patrol donned bright yellow t-shirts, which afforded them access everywhere in the festival. Several entrepreneurial workers sold their t-shirts for hundreds of dollars, while other did more drugs than work.

As former MTV presenter Tim Healy later said, “Security at Woodstock ’99 was kind of a joke. It was like, you know, kids with yellow T-shirts.”

On the final night of Woodstock ’99, local police and troopers with the New York State Police had to be called in to help calm the situation. The majority of officers were wearing riot gear, and through a coordinated effort were able to disperse the crowd away from the fires and back toward the campground and entrance.

Even after the chaos of Woodstock ’99, organizers Lang and Scher insisted it was a success. During a press conference, the pair misrepresented what had actually happened at the disastrous event, saying, “We had some amazing music. Then you’ve got knuckleheads, maybe 50 of them, causing trouble… So let’s try to focus on the overwhelming positiveness.” 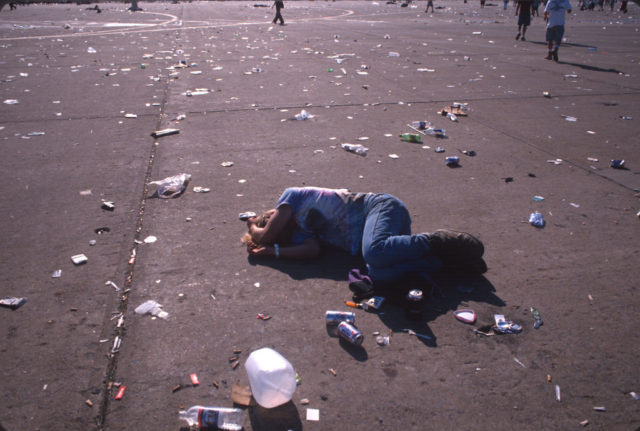 The reality of Woodstock ’99 was that there were no positives to focus on. Unlike the peaceful gathering 30 years prior, the festival was violent and destructive. Multiple women reported being sexually assaulted, and many attendees got sick from drinking water contaminated by sewage. For many, it’s believed organizers cared more about earning a profit than the safety and well-being of those who’d purchased tickets.

More from us: Unexpected Ways ‘Goodfellas’ and ‘The Shawshank Redemption’ Are Connected

While the festival had its fair share of mishaps, many attendees still have positive memories of their time at the historic gathering. “Although I had a kind of scary experience, it was a blast!” said an attendee named Heather in the new Netflix documentary, Trainwreck: Woodstock ’99. “It was an experience of a lifetime.”