Bryan Adams truly is a jack of all trades. A singer, songwriter, and talented performer, Adams also has another profession under his belt as an award-winning photographer with features in major publications like Vogue, Harper’s Bazaar, and Vanity Fair.

Adams recently reminisced on an extra special photograph taken 20 years ago of Queen Elizabeth II to mark her Golden Jubilee in 2002. The photo was later featured on a special edition postage stamp in Adams’s home country, Canada. The singer shared the photo on his Twitter to pay respects to the monarch, who died on September 8, 2022.

The photo of the Queen is candid and classic – you can barely tell that Adams was only given five minutes to take it!

Adams told Yahoo! Entertainment how the rare opportunity came about: 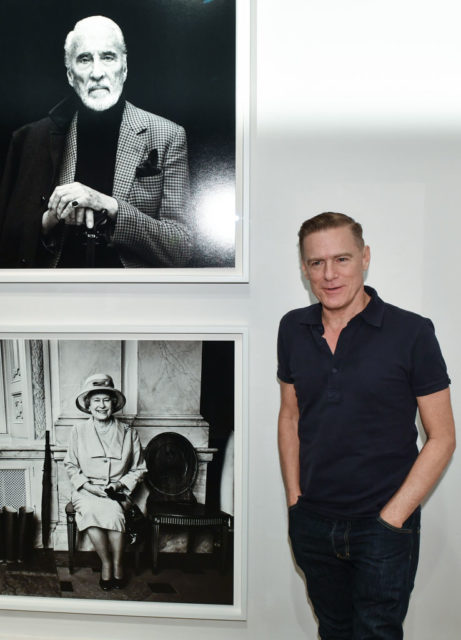 Bryan Adams stands in his exhibition “Exposed” in the gallery Camera Work next to the photo he took of Queen Elizabeth. (Photo Credit: Jens Kalaene / Picture Alliance via Getty Images)

The photo wasn’t just taken at the Queen’s house, it was taken at Buckingham Palace in a foyer that led to one of the palace gardens – thus the rain boots (or wellies, as Queen Elizabeth would call them) and umbrella by the window, which tells a story about the Queen’s two lives as a monarch as well as a mother, grandmother, and a lover of the outdoors.

More from us: The Cure’s Robert Smith Made an Eerily Accurate Prediction About the Queen’s Death

“I asked her to sit there because she was about to leave, and all the photographers that work with her get five minutes … And as she was leaving, I said, ‘Ma’am, do you mind just sitting on the chair for a moment?’ explained Adams. “She was very at ease and made me feel comfortable,” Adams recalled. “I hope I did the same.”