When a porcelain head, along with mechanical parts, showed up at the Franklin Institute, it came with virtually no explanation of where it was from or who its original owner was. Not sure what to make of the contents, employees at the Institute worked to put back together the pieces, only to find that it was a small, broken automaton – an early form of robot – in the shape of the young boy.

A box of damaged parts arrived at a science museum 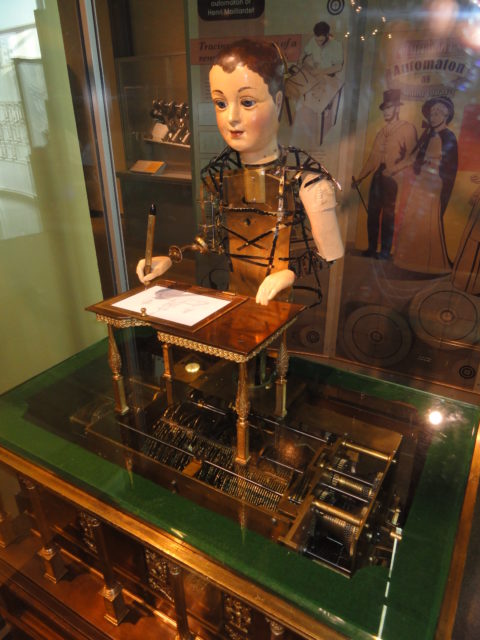 In 1928, a box filled with damaged mechanical parts, including brass strings, levers, and gears, was delivered to Philadelphia‘s Franklin Institute. Also inside the box were a porcelain boy’s head and hands.

This box was donated by the family of John Penn Brock, a steel magnate, who knew little of the origin of the mechanical and porcelain parts. They believed that the contents once belonged to a 19th-century showman named Maelzel who exhibited the device widely throughout the US. Beyond that, little else was known about the contents of the box. 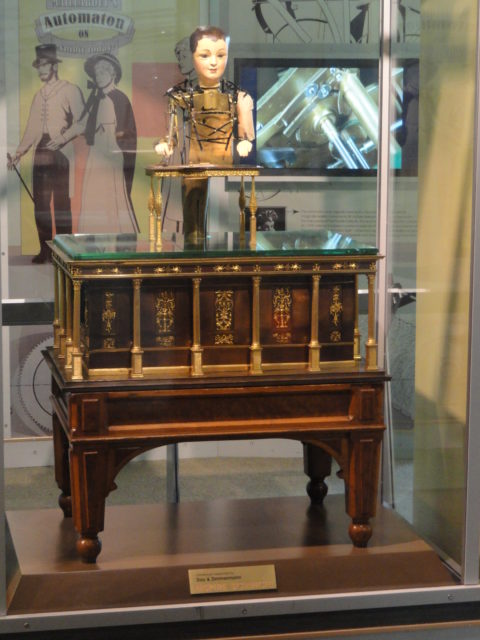 The base is where the mechanics of the automaton are located, to allow for the shape of the body to remain realistic and more ‘memory’ to store. (Photo Credit: Daderot / Wikimedia Commons / Public Domain)

When it arrived, a mechanic on the Institute staff, Charles Roberts, began reconstructing and repairing the contents. However, without any blueprints or notes from the original creator, Roberts had to try and restore the device using his own knowledge.

Thankfully, he was a highly skilled mechanic. He was able to apply concepts of how mechanical objects function to put the “automaton” into working order. What Roberts reassembled was a machine that looked like a young boy that, when the mechanism was wound, would write or draw.

The automaton answered the mystery of its origin

Once the automaton began working again, it revealed its true origin to the world. After it’s wound up, the automaton uses its writing utensil to draw three pictures and write four poems. At the end of the fourth poem, it completes its verse with “Ecrit par l’automate de Maillardet,” which means “Written by Maillardet’s automaton.”

Henri Maillardet was a Swiss-born mechanician who produced clocks and other mechanisms. He had worked in the shops of Pierre Jaquet-Droz, who was in the business of producing animated dolls.

One of the drawings that the automaton could create was a Chinese temple, shown above and drawn by Maillardet’s automaton. (Photo Credit: Henri Maillardet / Wikimedia Commons / Public Domain)

Maillardet built this particular automaton in the likeness of a small boy with the intention to tour the machine around Europe. Given the size of the boy, the mechanism he used could not fit inside the chest cavity as it was far too large. If it were to fit, the “memory” of the automaton would be dramatically reduced, limiting it to only one or two verses.

To combat this problem, Maillardet put the mechanism that serves as the automaton’s “memory” underneath the body of the boy. In this way, Maillardet was able to greatly expand the abilities of the machine, making it seem more of a wonder.

The Franklin Institute explained the mechanism on its website. “The memory is contained in the ‘cams,’ or brass disks. As the cams are turned by the clockwork motor, three steel fingers follow their irregular edges. The fingers translate the movements of the cams into side to side, front and back, and up and down movements of the doll’s writing hand through a complex system of levers and rods that produce the markings on paper.”

Maillardet sold the automaton at some point in the 19th century to a showman named Maelzel who continued to exhibit it, including in the US.

Possibly with Barnum, now at the Franklin Institute 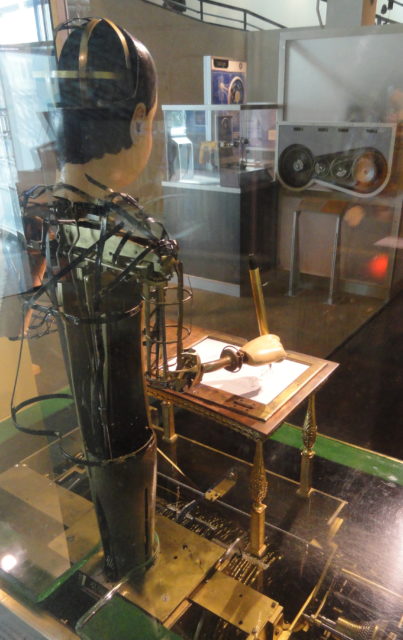 From the back of the automaton, the inner mechanism is easier to see as it forms the base of the entire machine. (Photo Credit: Daderot / Wikimedia Commons / Public Domain)

While in the US, it is believed that the automaton may have ended up in the hands of P.T. Barnum. Barnum likely put the automaton on display in his museum in New York, but a fire devastated the building as well as many of the exhibits inside. This fire occurred in 1865, long before the automaton landed on the steps of the Franklin Institute. This is likely how the machine got so damaged.

More from us: The Mütter Museum Houses Albert Einstein’s Brain and Thousands of Other Creepy Curiosities

The automaton is still on display at the Franklin Institute in Philadelphia. It served as the inspiration for Brian Selznik’s 2007 book The Invention of Hugo Cabret, which was later adapted by Martin Scorsese into a film called Hugo (2011).