The 1970s brought about its own fashion style, focused on individual expression that included those classic bell bottoms, miniskirts, and bright colors. At the peak of this fashion movement were those who modeled the clothing, earning themselves significant fame. This is what nine of the hottest supermodels from the 1970s looked like at the height of their careers, and what they look like now.

Janice Dickinson is arguably one of the most successful models from the 1970s. After she won the “Miss High Fashion Model” competition, she moved to New York. She didn’t have much luck there but relocated to Paris instead, where she was highly successful. By the time she returned to New York in 1978, she was a popular model with consistent work. 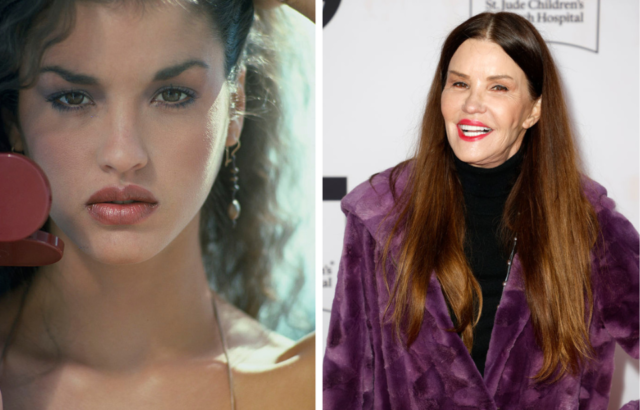 In the 1980s she had earned herself the title of supermodel for her popularity and how easy she was to recognize. As Dickinson’s modeling career eventually dwindled, she picked up work as a fashion photographer so that she could stay in the industry. At this time she also worked as a judge on America’s Next Top Model. Later in life, she was featured on many different TV shows as a celebrity.

Lauren Hutton is best known for her signature feature, the gap between her two front teeth. Initially, this was something that modeling agents looked down on, but when she was signed by Revlon in 1973, that all changed. Hutton modeled for most of her life, continuing in the industry well into her 70s at New York Fashion Week. 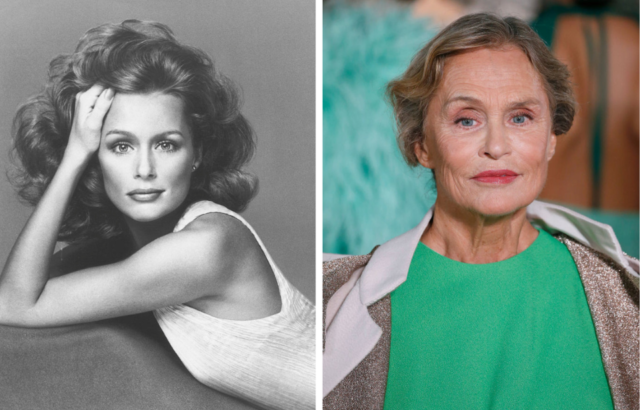 As with many models, she also tried her hand at acting, featuring in Paper Lion (1968) with M*A*S*H star Alan Alda, The Gambler (1974), American Gigolo (1980), and TV shows Paper Dolls and Nip/Tuck. Outside of her career, Hutton is a lifelong diver, promoting marine conservation and diving all over the world.

Grace Jones first started modeling in New York when she signed with Wilhelmina Models in 1966. As with Janice Dickinson, it wasn’t until she moved to Paris in 1970 that she took off in popularity. She modeled for prestigious designers like Yves Saint Laurent, Claude Montana, and Kenzo Takada, and was featured on the covers of high fashion magazines such as Elle and Vogue. 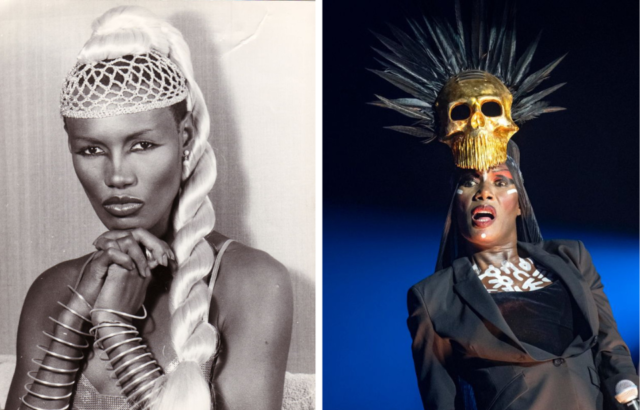 In the 1970s Jones also took up a singing career, releasing many popular albums throughout the last few decades. She still performs her music. By the 1980s she added another career into the mix, appearing in many films with famous actors like Arnold Schwarzenegger, and Tim Curry.

Christie Brinkley became famous for modeling in Sports Illustrated Swimsuit issues. She was first discovered at a post office in Paris in 1973 by an American photographer. After joining the industry, she appeared on three Sports Illustrated Swimsuit covers in a row – 1979, 1980, and 1981 – an unprecedented feat at the time. In addition, she was the face of CoverGirl for 25 years, making an appearance on an impressive 500 or more magazine covers. 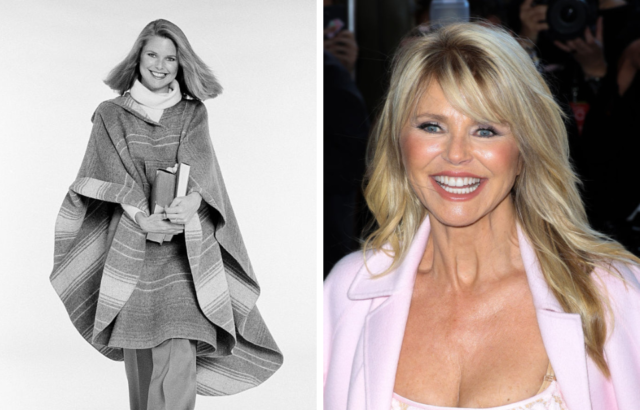 She went on to work in many different industries outside of modeling, including acting, photography, writing, and activism. She starred in National Lampoon’s Vacation, and was featured in The Cosby Show and Mad About You. Brinkley married the famous musician Billy Joel in 1985, but the pair divorced in 1994. She had three other marriages.

Cristina Ferrare began acting at the young age of 14, before working as a model for Max Factor makeup at 16. By 20, she was taking on jobs modeling on the cover of different major fashion magazines. Through her modeling career, she began to get offers to work in film. 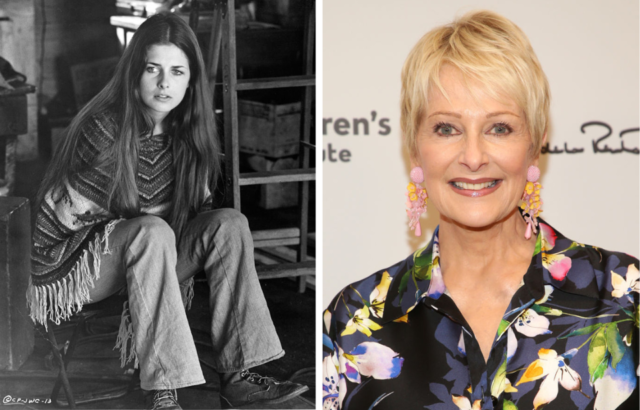 Cristina Ferrare in a scene from the film J.W. Coop in 1971, and at the 32nd Annual Colleagues Spring Luncheon in 2022. (Photo Credit: Columbia Pictures/ Getty Images cropped, and Phillip Faraone/ Getty Images/ cropped)

She rose in popularity through acting in many films in the late 1960s and early 1970s. She played the lead in The Impossible Years (1968), J.W. Coop (1968), and Mary, Mary, Bloody Mary (1972). In 2000, she and her mother created the Cristina Ferrare Collection of clothing. Later in life, she began acting on TV shows, including Big Bowl of Love, and The Home Show.

Unlike many 1970s supermodels, Patti Hansen didn’t go out of her way to have a career in fashion. She was discovered while working at a hot dog stand in 1972. She was quickly whisked away to Paris before eventually being featured in many magazines including Seventeen, American Vogue, Cosmopolitan, Glamour, Harper’s Bazaar, and Esquire. 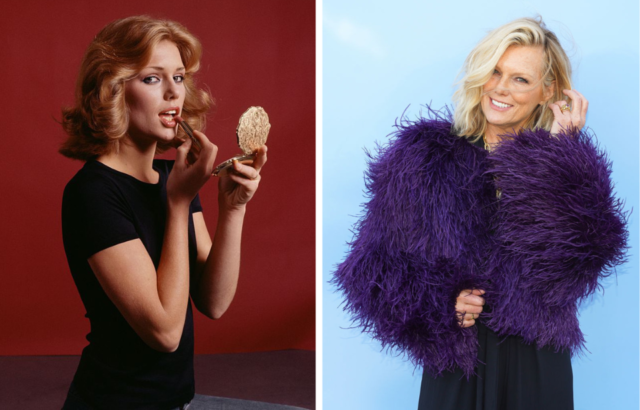 Outside of her modeling, Hansen is also well known for marrying Rolling Stones guitarist Keith Richards. She met him when she was only 23 while on the dance floor at Studio 54, the famous disco nightclub in New York City. The couple was married on December 18, 1983 – his 40th birthday.

Cheryl Tiegs is often considered to be the first American supermodel and a pinnacle of ’70s pop culture. Her career started after she posed for a bathing suit ad while in her senior year of high school. The staff at the fashion magazine Glamour saw the ad and booked her immediately for her first shoot, and the rest is history. Tiegs went on to book shoots with multiple magazines. 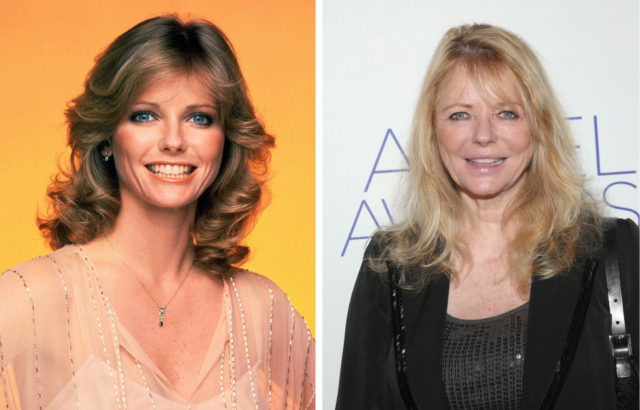 It was a photo of her wearing a pink bikini in 1978 that became her most iconic, and its popularity was unrivaled throughout the 1970s. Later in her life, she was featured on a variety of different TV shows as a celebrity guest.

Model-turned-actress Jerry Hall was one of the most popular models of the 1970s. She was scouted while on a trip to the French Riviera with her twin sister, Terry. Soon after, she moved to Paris to start her career. By 1977, she had appeared on the cover of over 40 magazines including Italian Vogue and Cosmopolitan. She was also earning an impressive rate of over $1,000 a day at this point as she was one of the most wanted models in the world. 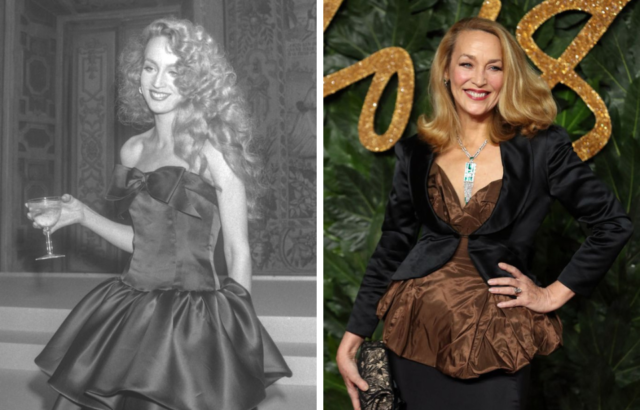 In 1980 she appeared in the movie Urban Cowboy, and Batman in 1989. In the following years, she continued acting in both television and film. One of the things that she is arguably best known for is her marriage to Mick Jagger of the Rolling Stones. The pair had four children together before they decided to separate, and their marriage was declared to be not legally valid. She went on to marry Rupert Murdoch, from whom she is also divorced.

Karen Bjornson is best known for being one of the “Halstonettes,” a group of models who followed the famous designer Roy Halston Frowick, simply known as Halston, around. She was one of his muses for two years, having just arrived in New York City to work in modeling. 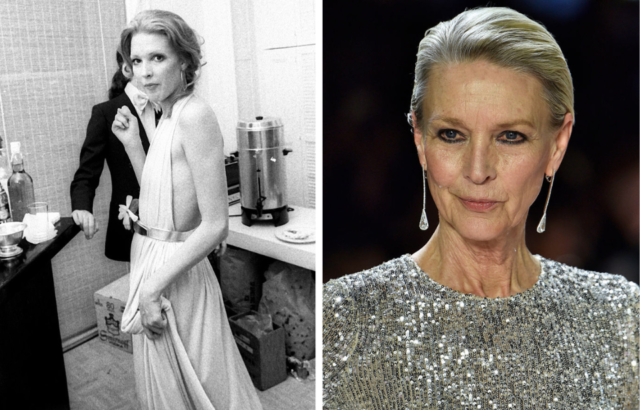 She walked the runway for many different designers later in her career as well, including Calvin Klein, Perry Ellis, Ralph Lauren, and Donna Karan. Although she retired from her career in 1989 to become a mother, she did make a comeback when she was 50.

Supermodel Iman was discovered while studying political science at the University of Nairobi in 1975. She was extremely successful in her career and was the muse of multiple designers: Gianni Versace, Thierry Mugler, Calvin Klein, Donna Karan, and Yves Saint Laurent. Iman was featured on the cover of many different fashion magazines around the world. 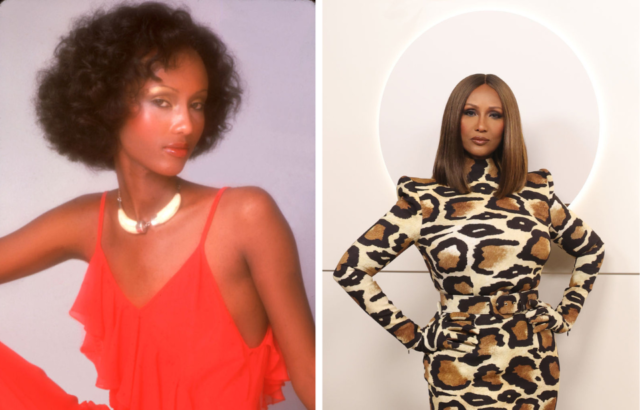 Iman became so popular that she was also considered one of the great supermodels. She went on to marry David Bowie in 1992, and they stayed together until his death in 2016. The couple met when a friend set them up on a blind date in 1990.

American Marisa Berenson was discovered by Vogue when she was a teenager, working her way into the industry in the 1960s. That didn’t stop her from becoming one of the most prominent models of the ‘70s, however. She was called “the girl of the Seventies” by Yves Saint Laurent, and, according to Berenson herself, was one of the highest-paid models in the world at the height of her career. She was the cover girl for Vogue in July 1970 and Time in December 1975. 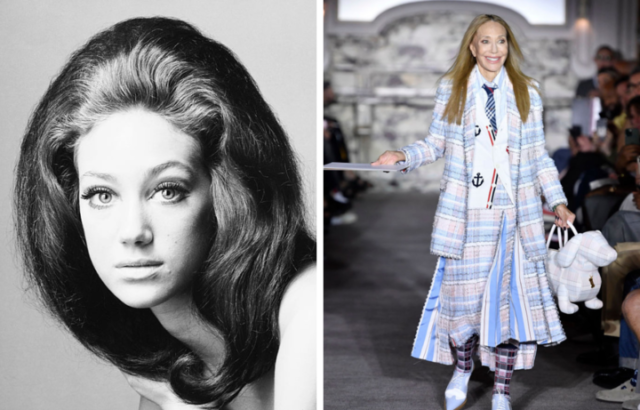 Outside of modeling, she was known for her appearances on the American nightclub scene, even earning the nickname “The Queen of the Scene.” She began acting while she was still modeling, first starring in Death in Venice in 1971, and eventually winning a National Board of Review Award for Best Supporting Actress in the 1972 edition of Cabaret. She continued acting in her later life, and even broke into stage acting in August 2016 when she appeared in Romeo and Juliet in London, England.

Rene Russo is probably best known now for being a famous actress, but when her career first started she was a model. She became famous in the ’70s after being discovered at a Rolling Stones concert. Russo became extremely popular, getting featured on the cover of Vogue and Cosmopolitan. 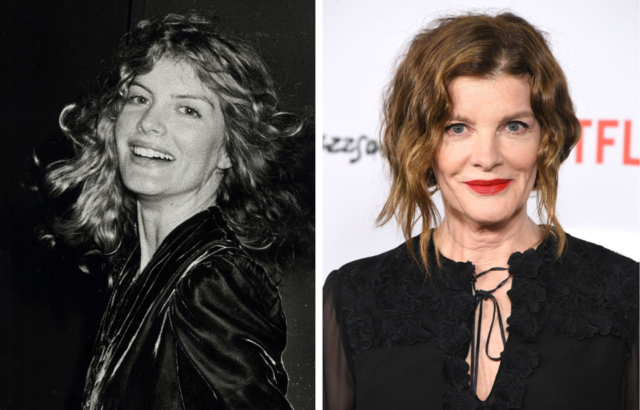 More from us: Here Are The ‘Most Beautiful’ People of the ’90s – And How They Look Today

Brooke Shields went so far as to call Russo the “most beautiful thing that ever walked the face of the earth.”By the time she was 30, she’d moved on to acting instead of modeling. Her first film was Major League (1989) but she went on to star in multiple popular movies including Yours, Mine & Ours (2005), The Intern (2015), and as Frigga in many films in the Thor franchise.