The Eerily Beautiful Skeleton of Saint Munditia Is Covered in Jewels

Inside an opulent glass case in the side altar of St. Peter’s Church in Munich, Germany, is the skeleton of Saint Munditia. The church, also known as “Alter Peter” or “Old Pete,” predates the city of Munich, which was first mentioned in 1158.

The relics of the martyred saint are covered in transparent cloth embedded with ornate gold and jewels in true Baroque style. Her hands clutch a flask that contains dehydrated blood – proof of her martyrdom. Her glass eyes, surrounded by a halo of gold, peer out from behind the ossuary box at whoever might be looking in at her from behind a locked wrought iron gate.

The Cult of St Munditia

Not much is known about Saint Munditia. Her name isn’t listed in the Book of Saints of the Roman Martyrology, a catalog of saints and martyrs that marks their anniversaries and feast days. But the inscription on her ossuary reads CORPUS SANCTA MUNDITIA MARTYRIS, or “Body of Saint Munditia, Martyr.” Despite being an “unofficial” saint, Munditia is purportedly the patron saint of spinsters. 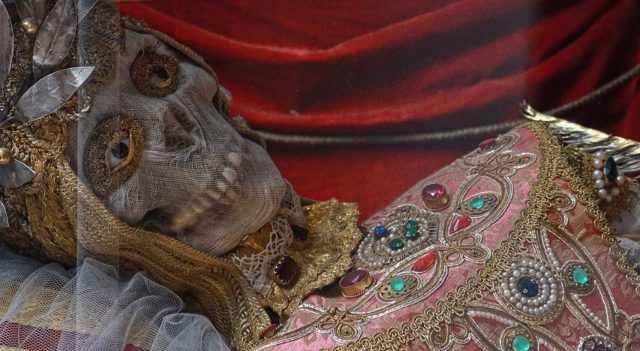 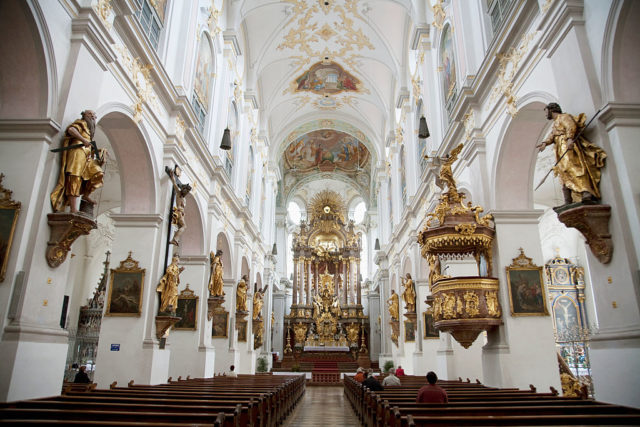 The relics of the saint were supposedly discovered in the Roman catacombs in 1675 and brought to Munich by Franz Benedikt Höger, a local businessman. The relics were moved to St. Peter’s Church in 1677, and have been kept there ever since. Her skeleton was covered up by a wooden structure in 1804 due to growing social fear and superstition around skeletal remains.

Munditia was uncovered again in 1883 which led to a renewed interest in her cult. But who was the woman in the box before she became a saint, and how did she become a martyr?

The inscription located inside the ossuary offers a glimpse into Munditia’s circumstances. Translated from German, it reads:

“In devout remembrance of Munditia Protogenia. The commendable. Who lived 60 years. Who passed peacefully into eternity 15 days before the Calends of December – APC.” 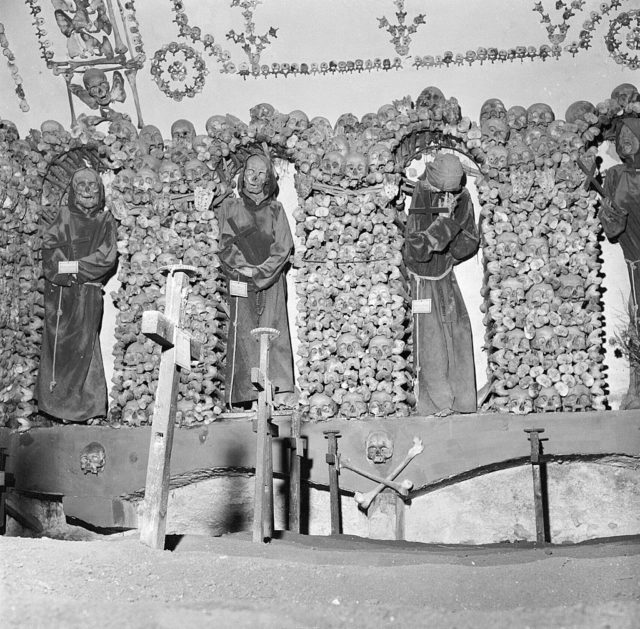 A collection of human skulls and bones surround the hooded, cloaked skeletons of monks in the catacombs of Rome. (Photo Credit: Vecchio / Three Lions / Getty Images)

According to the Reliquarian, some people believe the APC on the inscription means Ascia Plexa Capita, indicating Munditia was decapitated with an axe. Others think APC could mean Andronico Probo Consulibus, which means “During the consulship of [Tatius] Andronicus and [Pompeius] Probus.” If this translation is correct, it means that Munditia would have died in 310 CE – when the Roman politician Probus was a consul alongside Andronicus under the Roman emperor Galerius. 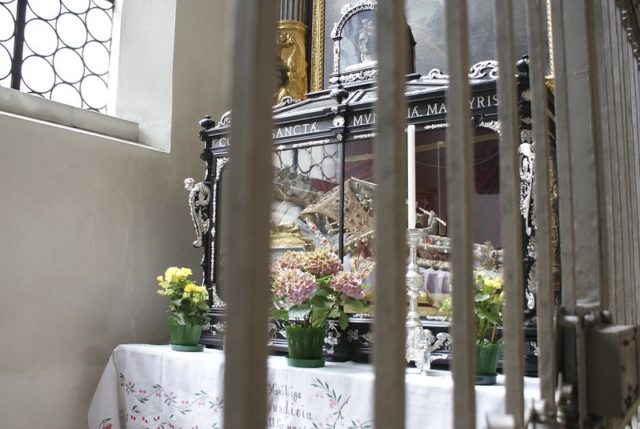 The ossuary of Saint Munditia is kept behind a locked iron gate. (Photo Credit: kezee / Flickr / CC BY 2.0)

With all this in mind, Munditia was likely a Roman woman born in 250 CE who was killed by beheading with an axe on November 17, 310 CE. Following her death, she was buried in the Roman Catacombs underneath the church of San Lorenzo Fuori le Mura – which still stands today – where she remained undiscovered for over 1300 years.

Who’s skull is above the ossuary?

If you look closely, you will see a second, small ossuary containing a skull that sits on top of Saint Munditia’s ossuary. The skull is that of Saint Erasmus of Formiae – otherwise known as Saint Elmo. The saint’s skull, with two blue eyes that look straight forward, rests on a pillow in a glass box with a halo placed on a cushion. Saint Elmo was disemboweled in 303 CE and is venerated as the patron saint of sailors. 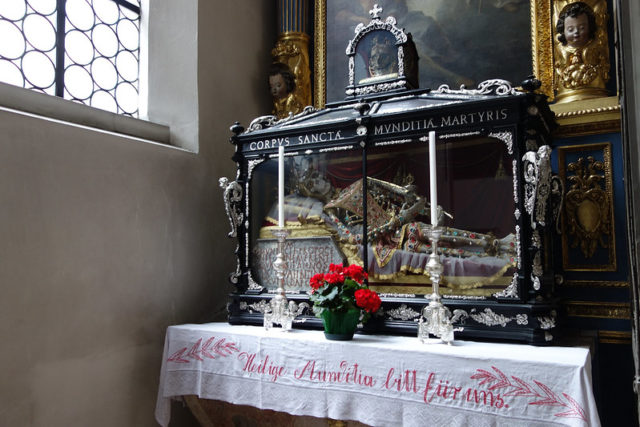 The surreal beauty of Saint Munditia has inspired poets for hundreds of years, though many see her more as a rare oddity than a relic. As Trinidadian writer Vahni Capildeo wrote, “St. Munditia, centuries later, bewigged, bolted and belted with jewels, . . . glassed off like the snake room at the zoo.”

Though many visitors miss seeing the ossuary entirely since it sits behind a locked iron gate, if you ever find yourself in Munich be sure to pay a visit to Munditia at St. Peter’s Church.

« See How the Hottest Supermodels of the ’70s Have Changed Over the Years
Lizzo Played A 200-Year-Old Crystal Flute In Concert, And Its History Is… Controversial »