How Doris Day Defied the Odds to Become a Hollywood Star

Doris Day rose to fame as one of Hollywood’s brightest Golden Age stars. Unlike other blonde bombshells of her time, Day built a following not with scandalous drama and dumbed-down roles but with her wholesome and upbeat personality. She starred alongside some of the biggest names in Hollywood in award-winning films such as Romance on the High Seas, The Man Who Knew Too Much, Pillow Talk, and The Thrill of it All.

But the singer and actor’s background was far from what we see on the big screen. Despite hardships and adversity, Doris Day came through it all to become one of the most famous women of her generation. 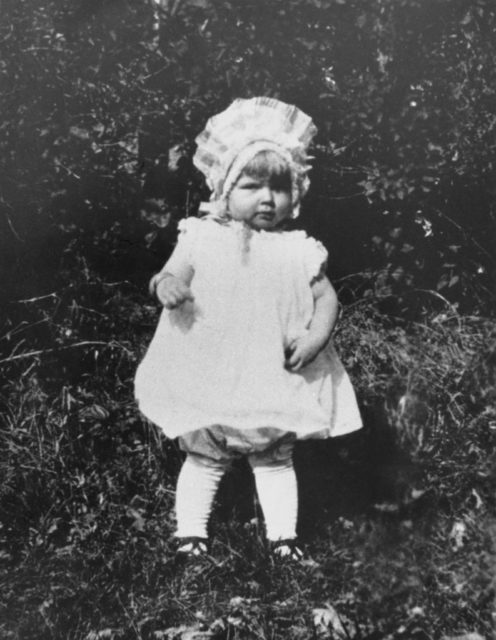 In her autobiography, Day shares that she saw her father cheating at a large party her family was hosting. “[I] burrowed my crying face into the [bedsheets], but there was no way to shut out the awful things I was hearing,” Day wrote.

Coming from a family of musicians and performers, Day started out as a dancer. At fourteen, she formed a dance act with a local boy named Jerry Doherty. The dancing duo won $500 at a local talent show and decided to try their luck in Hollywood. 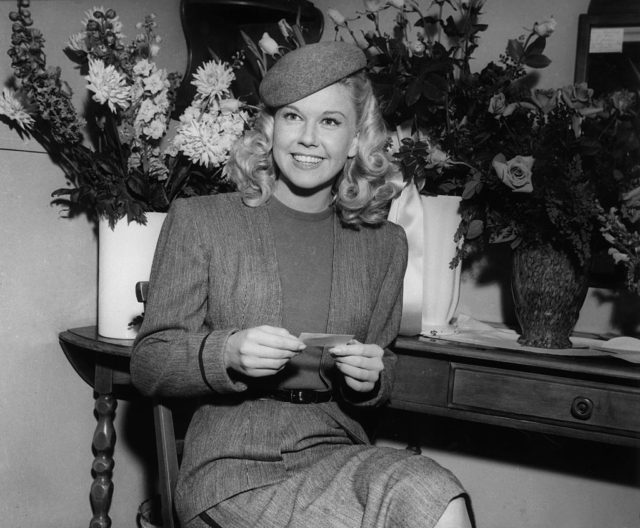 Doris Day smiling as she sits in front of bouquets of flowers in her dressing room, circa 1948. (Photo Credit: Hulton Archive / Getty Images)

After a quick trip to Tinseltown, Doris and Jerry returned home to Cincinnati in hopes of packing up and moving to Hollywood for good. Before they could leave, Day was tragically injured in a car accident – the car was hit by a train – ending any possibility of continuing her dancing career. Day refused to let the accident ruin her chance at making it in Hollywood. She took singing lessons and in 1939 she started performing with Barney Rapp’s band. She later worked and toured with other bandleaders including Jimmy James, Bob Crosby, and Les Brown.

Day met her first husband, trombonist Al Jorden, while she was just 16. The couple married in 1941 but the newlywed bliss didn’t last long. Jorden was known to be physically abusive and extremely jealous, letting his true colors show just one day after they were married. 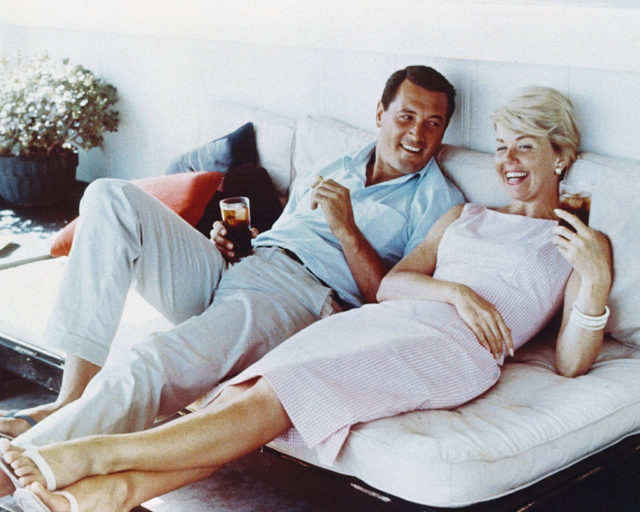 Jorden assaulted Day when she revealed she was pregnant and refused to get an abortion. He even threatened to shoot her at one point. They welcomed their son Terry in 1942, and divorced the following year. Ultimately, Day would have four marriages throughout her life.

Her second marriage to saxophonist George Weidler (it seems she had a type!) wasn’t violent like her first. But after realizing his wife was about to become one of the most famous women in Hollywood, Weidler left her in 1949 – leaving only a letter behind. In 1951, Day married her manager Martin “Marty” Melcher. The couple had a loving marriage until Melcher’s death in 1968. 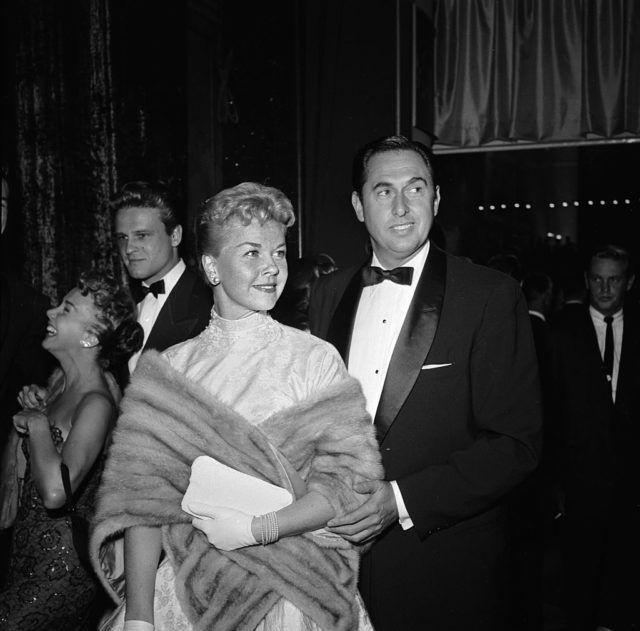 The newly widowed Doris Day found out that her manager and husband had completely mishandled her career and finances. Day discovered Melcher signed her onto a CBS comedy, which would become The Doris Day Show, without her consent. He had also embezzled millions of dollars that she earned through her career, most of it lost on poor investments.

In 1976 Day married her last husband, Barry Comden. The couple stayed together until Comden’s death in 1982.

In 1956 Day ran into her father, whom she hadn’t seen in years. According to her autobiography, she spotted him at a train station in Cincinnati, Ohio when he invited her to visit his bar. At the bar, Day met her father’s fiancee Luvenia, a Black woman, and describe the experience as feeling “totally enveloped by … the beautiful change that had come over my father,” wrote Day. 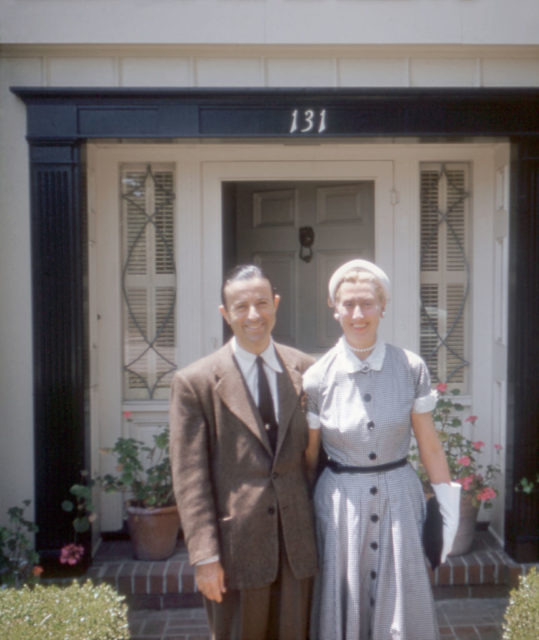 Doris Day’s parents Alma Sophia Kappelhoff and William Kappelhoff pose for a portrait outside her home in circa 1950. (Photo Credit: Donaldson Collection/Getty Images)

Several years later Day invited her father to her aunt’s home – which was located in a notoriously racist neighborhood. Her father arrived with Luvenia, who stayed inside the car. During the get-together, no one asked Luvenia to come inside and after an awkward visit Day’s father left – waving to his daughter from the car.

Day’s son was involved with the Manson family

Day’s son Terry Melcher (adopted by her third husband Martin Melcher) nearly avoided a gruesome death at the hands of the deranged “Manson family” cult. As a record producer, Melcher was introduced to Charles Manson, an aspiring musician, in 1968 by their mutual friend Dennis Wilson of the Beach Boys. When Wilson became fed up with Manson’s antics, Manson latched onto Melcher. 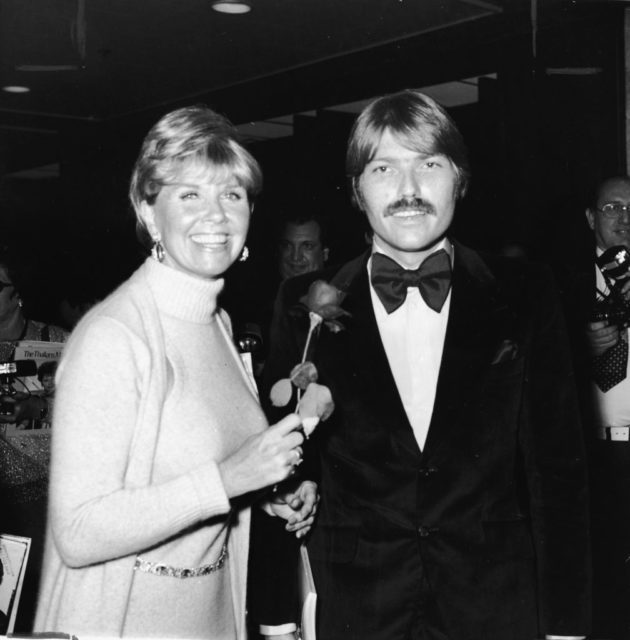 Melcher was accepting of Manson, even letting him audition, but he was ultimately unimpressed and Melcher cast him aside. He became another name Manson would add to his “hit list.” What made matters worse was that Manson knew where Melcher lived: 10050 Cielo Drive in the Los Angeles hills.

Luckily, Doris Day unknowingly saved her son’s life. Around the time of the Manson murders, Day had lost her husband Marty Melcher and asked Terry to come to stay with her at their beach house. Terry sold his house on Cielo Drive, which was purchased by none other than Roman Polanski and Sharon Tate, and would ultimately become a gruesome murder scene.

Her grandson claims he wasn’t allowed to see her

Towards the end of her life, many sources close to Day claimed that she was being taken advantage of by caretakers and family members. Her former handyman Syndey Wood told The Daily Mail in 2013, “She used to have the right people taking care of her. People like me, who worked for her out of love not for the money.”

Wood’s suspicions about the dubious people who surrounded the former Hollywood star were corroborated by Day’s only grandson Ryan Melcher. Melcher claimed that he was not allowed to see his grandmother. 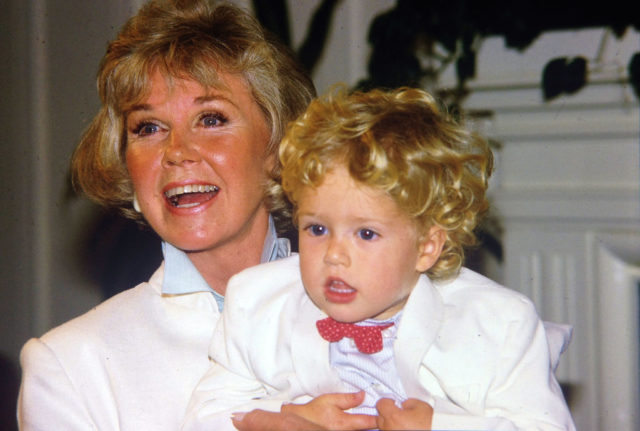 Doris Day with her grandson Ryan Melcher 4, the son of her only child Terry Melcher at a press conference at the hotel she owns in Carmel, California July 16, 1985 ( Photo Credit: Paul Harris/Getty Images )

According to Melcher, Day invited him for a visit in 2004 after the death of Terry Melcher. Instead of having a visit with his grandmother, Melcher was greeted by Day’s business manager who demanded to know why he wanted to see the star. The manager told Ryan he wouldn’t be allowed to see his grandmother – a crushing blow to the young man.

Day’s publicist at the time, Charley Cullen Walters, tried to clear up the controversy by claiming that it was his client’s decision not to see her grandson.

Was Day a recluse later on in life?

After a long career in the spotlight, Day retired from acting in 1975 and focused her attention on her charitable endeavors. An animal lover, Day helped to raise funds and awareness for various animal welfare organizations. Sources close to the star claimed that Day became more recluse after Terry’s death in 2004. She had a deep and caring relationship with her son, who died of skin cancer. 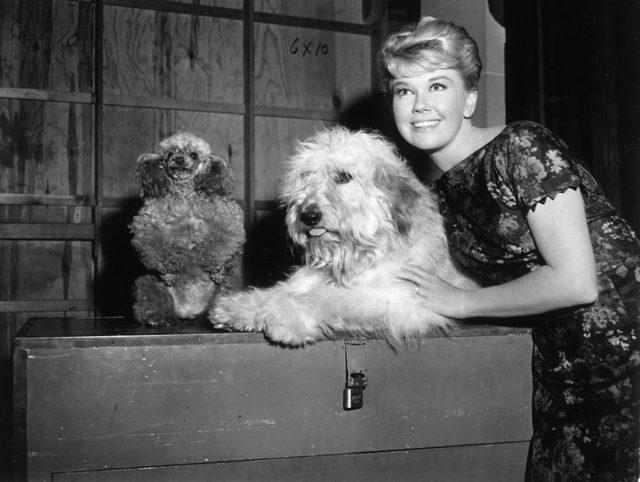 Doris Day’s love of animals shows as she poses with dogs she worked with on a film. (Photo  Credit: Hulton Archive / Getty Images)

Doris Day died in 2019 at 97 years old. Her good friend Lea Price spoke out against the rumors of Day’s exclusivity after her death, “She loved her pets. She loved answering all her fan mail … she was actively involved until she passed away.”

More from us: Why Marilyn Monroe Lied About Being Orphaned By Her Parents

« This 1,200-Year-Old Shipwreck is Re-Writing History Books
What We Know So Far About Season 6 of ‘The Crown’ Including the Actors Playing Prince William and Kate Middleton »