There’s one term uttered more than any other when someone is referring to a person who hates Christmas: “bah humbug.” This strange expression has been around for hundreds of years and has become associated with Christmas grouches, but what exactly does it mean, where did it come from and why is it used? Believe it or not, the term was coined well before Charles Dickens’ A Christmas Carol.

There’s some discrepancy over the origin of the word “humbug.” Its first use in writing has been traced back to the 1750 issue of The Student, or the Oxford and Cambridge Monthly Miscellany, which defined it as “a word very much in vogue with the people of taste and fashion, which, though it has not even the penumbra of a meaning.” 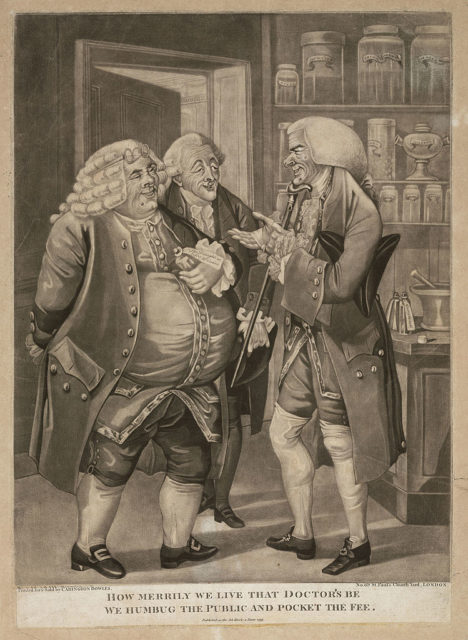 Three doctors standing in a shop, congratulating themselves on their profession and saying how they “humbug,” or deceive, the public. (Photo Credit: SSPL / Getty Images)

The saying was used in any and all situations, good and bad, but this isn’t true anymore. According to the Oxford English Dictionary, the term grew to mean “a hoax; a jesting or befooling trick; a thing which is not really what it pretends to be.” It’s this later definition that Charles Dickens had in mind when he coined the phrase, “bah humbug.”

Etymology of the expression, “bah humbug”

No one knows exactly where the term first came from or why, although they are many good guesses. Charles Godfrey Leland thought it might come from the Norse hum, which means “night or shadow,” and the word bugges, meaning “apparitions.” However, according to Francis Grose’s Dictionary of the Vulgar Tongue, “hum” initially meant “to deceive” in English and could also be paired with bugges. 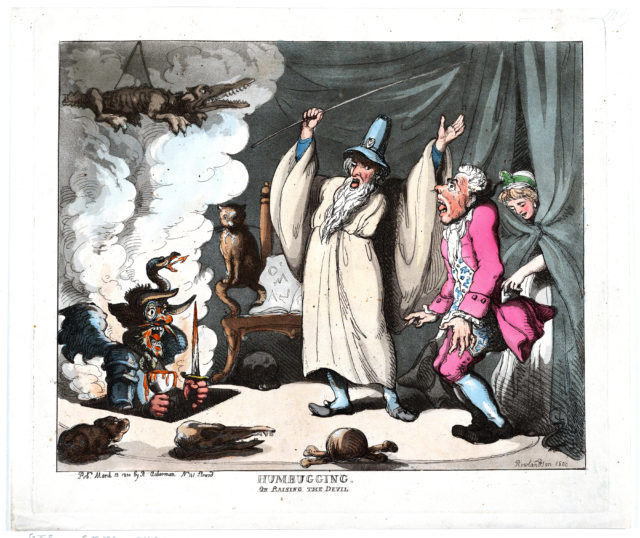 “Humbugging or Raising the Devil,” depicts the public as a credulous simpleton being distracted by a display of “the miraculous,” the better to have his pockets picked, 1800. (Photo Credit: Thomas Rowlandson / Wikimedia Commons / Public Domain)

In Irish, Uim-bog means “soft copper or worthless money,” so there may also be some connection there. The final potential connection could be the Italian phrase uomo bugiardo, which means “lying man.” This may be one of the most likely sources of the word “humbug,” as it became part of the vernacular at a time when Italian was heavily influencing the English language.

While the term humbug was evidently used for many years, it was popularized by Charles Dickens’ A Christmas Carol. The novella was published on December 19, 1843, and was so popular that the first edition was entirely sold out by Christmas Eve. By the end of the following year, a staggering 13 subsequent editions had been printed. 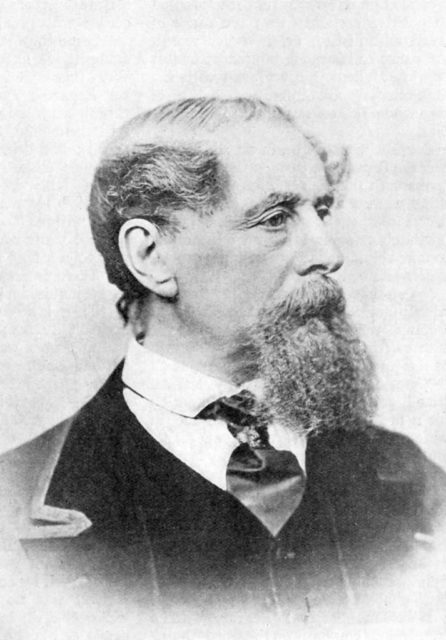 Dickens’ work, which includes the now-famous term “bah humbug,” was received favorably by critics and continues to see success. Since its inception, the novella has never once been out of print, has been translated into multiple languages, and has been made into opera, theater and film productions multiple times. There are movie versions starring the Muppets, Mickey Mouse and his cartoon friends, Bill Murray and many more.

The “King of Bah Humbug”

The title of “King of Bah Humbug” could only go to one person, Ebenezer Scrooge. The main character in A Christmas Carol, Scrooge is a bad-tempered and ill-mannered businessman who despises the Christmas season – that is, until he’s visited by three ghosts – that of the past, present, and future – who change his feelings and leave him more sympathetic to the festive season. 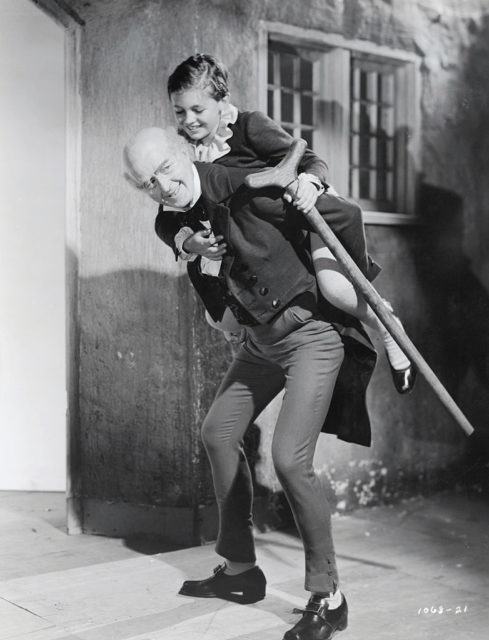 In the earlier part of the novel, Scrooge says “Bah! Humbug!” to all those who wish him a “Merry Christmas.” His sentiment ties into the original meaning of the word. He isn’t saying that he hates the holiday season, but rather thinks the entire celebration is a sham or hoax. When he’s visited by each of the ghosts, he also accuses them of being humbugs or hoaxes.

The phrase, however, has moved far past Dickens’ novella and is used to this day by those wishing to make a comment about disliking the Christmas season. The name “Scrooge” has become synonymous with a person who hates Christmas, so while the term was around for many years before A Christmas Carol, it was certainly this work that popularized it to the masses.

Use of the word “Humbug” in other popular works

P.T. Barnum, a contemporary of Dickens, was also affiliated with the word, “humbug.” He was often referred to as “Prince of Humbugs” for his use of hoaxes in his circus promotions. In fact, one of the many books penned by him was called, The Humbugs of the World (1865). 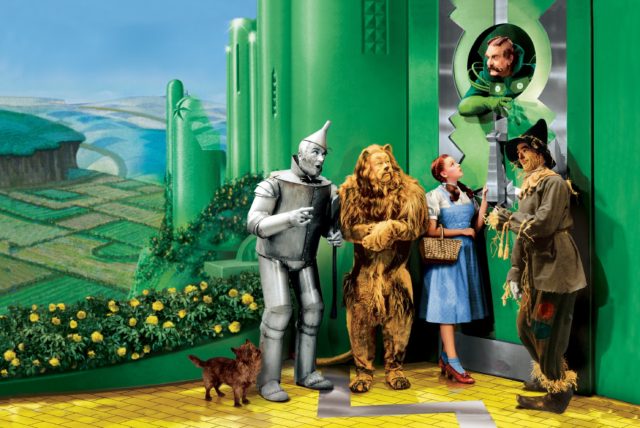 The term was also included in the classic fantasy book, The Wonderful Wizard of Oz, first published in 1900. In a chapter called “The Magic Art of the Great Humbug,” author L. Frank Baum describes the main characters finally getting a chance to meet with the Wizard, who explains that he’s nothing but a “humbug,” or a fraud.

There’s another definition for the word, which has nothing to do with deceit, Christmas or Charles Dickens. A humbug, to some, is also a type of candy that’s largely popular in the United Kingdom and the rest of the Commonwealth. They are small, hard-boiled sweets with black and white stripes, and are usually flavored with peppermint, or aniseed in Australia. 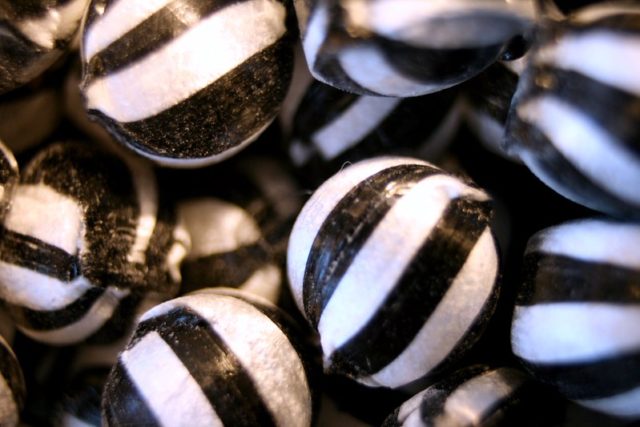 More from us: The Real Meaning of ‘Macaroni’ in ‘Yankee Doodle’

These candies were in existence before A Christmas Carol, but the term “humbug” predated them by almost 100 years. They’re thought to be from the north of England, and records dating back to the 1820s reference them. While Charles Dickens (and thus Scrooge) would likely have known about the existence of the candies, the iconic term “bah humbug” was certainly not derived from this sweet treat.