The Terrifying True Story Behind Netflix’s ‘The Watcher’

When a family purchases their dream home in the suburbs of New Jersey, they never could have expected it would become their worst nightmare. Netflix’s new show The Watcher follows the story of the Brannock family as they are terrorized by an unknown stalker. The series is actually based on a true story that is equally horrifying.

Netflix’s The Watcher is based on real-life events

In Netflix’s new show The Watcher, Dean and Nora Brannock (played by Bobby Cannavale and Naomi Watts) move from New York City to a picturesque neighborhood in New Jersey to provide their children with a safer upbringing. 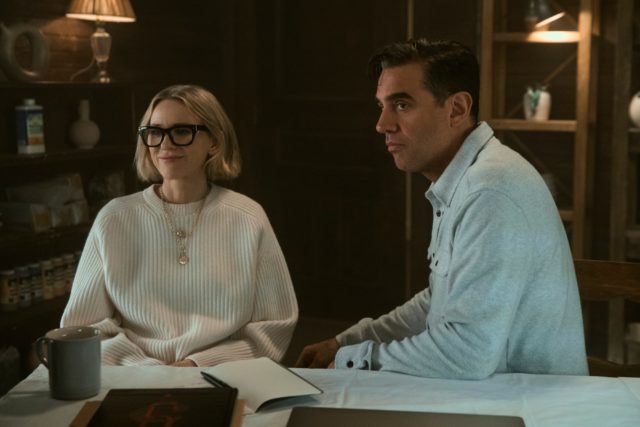 They may have bought their dream home, but a cast of creepy neighbors begin to meddle with the Brannocks. And shortly after moving in, the Brannocks receive a terrifying letter from someone calling themselves “the watcher.”

The chilling true story of The Watcher

The Brannocks are based on the real-life couple Derek and Maria Broaddus, who purchased the lavish six-bedroom, three-bath heritage estate at 657 Boulevard in Westfield, New Jersey in 2014. Just three days after they closed on the home, a suspicious letter addressed to the “new owners” arrived. The typed letter began just like any other friendly welcome: “Dearest new neighbor at 657 Boulevard, allow me to welcome you to the neighborhood,” but it soon took a horrifying turn:

“How did you end up here? Did 657 Boulevard call to you with its force within? 657 Boulevard has been the subject of my family for decades now and as it approaches its 110th birthday, I have been put in charge of watching and waiting for its second coming.

The writer signed off: “Welcome my friends, welcome. Let the party begin,” and signed his name, “The Watcher.” 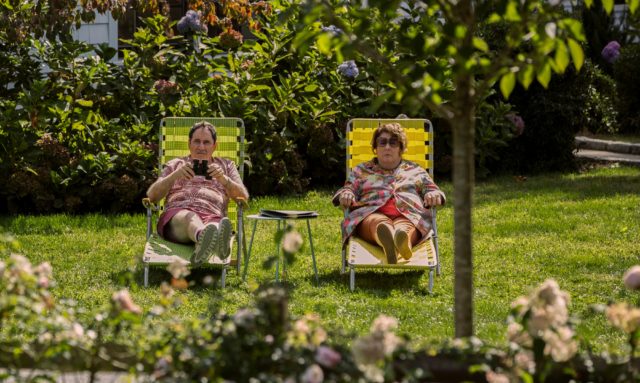 Richard Kind as Mitch and Margot Martindale as Mo, the suspicious neighbors in The Watcher. (Photo Credit: Netflix / michaella92 / MovieStillsDB)

The Broadduses soon discovered that the former owners of the home, John and Andrea Woods, also received strange letters in the days leading up to their departure from 657 Boulevard. The Woods family, who had lived at the home for 23 years, assumed it was a prank and threw away the letter. The Broadduses, on the other hand, were deeply disturbed by the letter they received and took it to the local police. They were warned not to tell anyone else about the note.

Two weeks later, another letter addressed the Broaddus family arrived as they began renovating the home before moving in. “The workers have been busy and I have been watching you unload carfuls of your personal belongings,” wrote The Watcher. “The dumpster is a nice touch. Have they found what is in the walls yet? In time they will.” 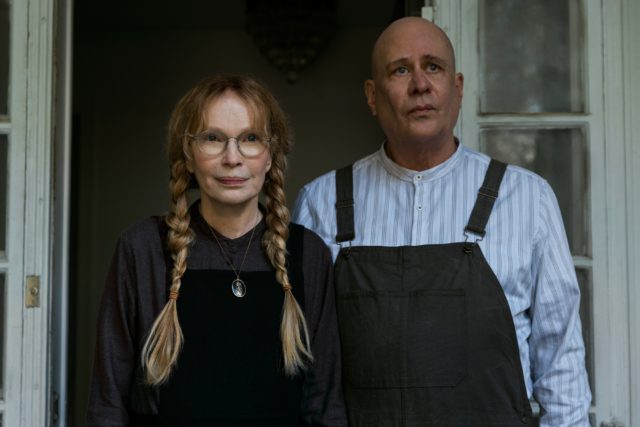 Mia Farrow as Pearl and Terry Kinney as Jasper, other potential suspects in The Watcher. (Photo Credit: Netflix / michaella92 / MovieStillsDB)

The Watcher revealed they knew the names of the Broaddus family. Alarmingly, they even knew the names and birth order of their children. The Watcher also targeted the children in other letters. Referring to them as “young blood,” they urged the kids to play in the basement:

“657 Boulevard is anxious for you to move in. It has been years and years since the young blood ruled the hallways of the house. Have you found all of the secrets it holds yet? Will the young blood play in the basement? Or are they too afraid to go down there alone. I would [be] very afraid if I were them. It is far away from the rest of the house. If you were upstairs you would never hear them scream.

Will they sleep in the attic? Or will you all sleep on the second floor? Who has the bedrooms facing the street? I’ll know as soon as you move in. It will help me to know who is in which bedroom. Then I can plan better.”

In the same letter, they also revealed that they “pass by many times a day. 657 Boulevard is my job, my life, my obsession. And now you are too [Broaddus] family.” Rightfully creeped out by the second letter, Derek and Maria stopped bringing their children to the house – and The Watcher took notice. They wrote the family a third letter, saying “Where have you gone to? 657 Boulevard is missing you.”

The Watcher plotted the deaths of owners

Even though they had purchased their dream home, the Broadduses never moved into 657 Boulevard after receiving the chilling letters. In fact, they put the home back on the market six months after they closed on the property. They were unable to find a buyer due to the creepy letters, which the family was very transparent about to any potential buyer who toured the home. 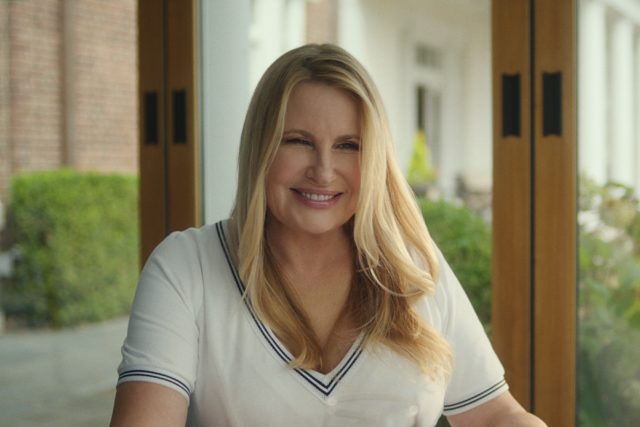 After several failed attempts to sell the home and even hand it off to a developer to be torn down, the Broaddus family was still stuck with 657 Boulevard. They were eventually able to rent out the home, and within weeks of the tenant’s arrival, another Watcher letter appeared. “You wonder who The Watcher is? Turn around idiots,” read the letter. “Maybe you even spoke to me, one of the so-called neighbors who has no idea who The Watcher could be. Or maybe you do know and are too scared to tell anyone. Good move.”

The letter was more threatening than the previous ones, complaining about the media attention the Broaddus family had brought to the home. They even talked about plotting Derek and Maria’s deaths: “Maybe a car accident. Maybe a fire. Maybe something as simple as a mild illness that never seems to go away but makes you [feel] sick day after day after day after day.”

The fourth and final letter read: “You are despised by the house. And The Watcher won.”

Who is The Watcher?

Luckily, Derek and Maria Broaddus always took the letters seriously and immediately went to Westfield police. And while investigators had suspicions about a couple of neighbors, The Watcher is still at large. The Broaddus’ next-door neighbor, Michael Langford, was one of the main suspects. As the letters suggest, his family had lived next door to 657 Boulevard since the 1960s, and was even described by locals as a “Boo Radley character.” 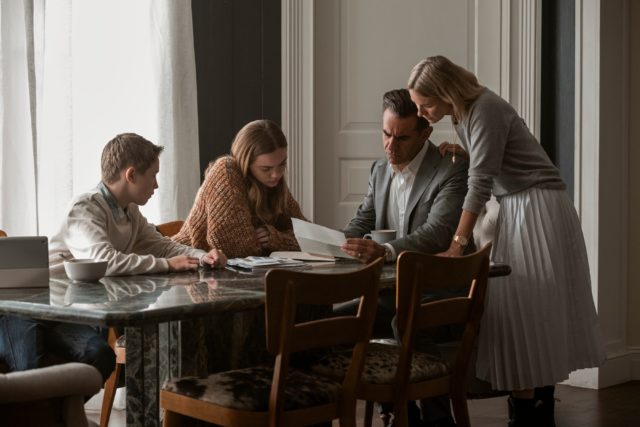 Interestingly, DNA taken from the envelopes proved the suspect was female but an investigation of Michael Langford’s sister Abby, along with the DNA of the previous owner Andrea Woods, also led to a dead end. In 2018 the Union County Prosecutor’s Office asked anyone who lived near 657 Boulevard to submit a voluntary DNA sample. None of the neighbors was a match, but someone named Malcolm Mannix wrote to the police objecting to the DNA samples.

There was just one issue: no one by the name of Malcolm Mannix lives in Westfield. Police believe the name came from a 1960s TV show called Mannix, which follows a police officer named Art Malcolm as he helps private investigator Joe Mannix solve crimes. While the connection was strange, it wasn’t enough to warrant an arrest. 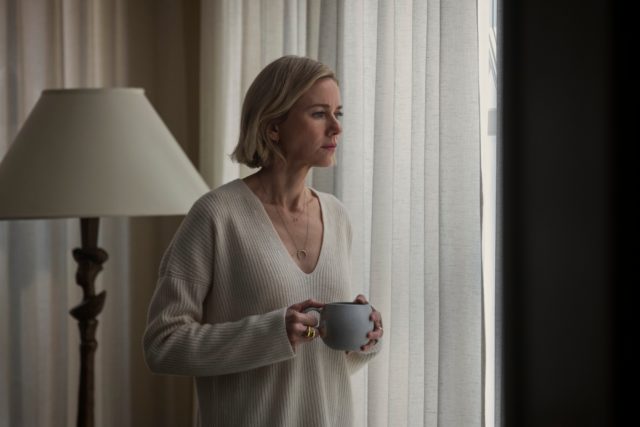 Some even believed the Broaddus family was behind the eerie letters as an excuse to get out of the sale of the house after they realized they could barely afford the $1.3 million home.

What happened to 657 Boulevard?

In 2019 the Broadduses finally sold the home they never lived in for $959,000 – at a $400,000 loss. The family left a note for the new owners along with a handwriting sample from The Watcher in case any new letters turned up. Their note read: “We wish you nothing but the peace and quiet that we once dreamed of in this house.”

More from us: Inspiring Facts About Marilyn Monroe That Netflix’s ‘Blonde’ Left Out

To date, no new letters have been sent by The Watcher.