A Year After the Titanic Tragedy, a Mourning Family Received This Chilling Letter

Passengers boarding the RMS Titanic on April 10, 1912, entered the massive “unsinkable” luxury ship with excitement and awe. Many families joined the passengers to say goodbye, not realizing that for most, they would be their final farewells. When the Titanic began to sink, one passenger scrambled to write a note to his family that would not reach them for over a year, and its contents are still chilling to read.

Jeremiah and his cousin climb aboard the RMS Titanic 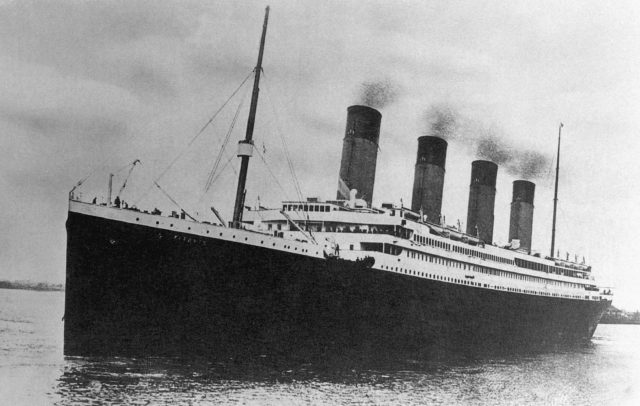 Jeremiah Burke was the youngest of seven children. He purchased a ticket for passage to America on the RMS Titanic in 1912. Two of his sisters were living in Charlestown, Boston and they had sent him money to help pay for the trip. At the young age of 19, Jeremiah was six feet two inches tall and ready to embark on the greatest, and sadly the last, journey of his life.

Jeremiah was not making this long voyage alone. His 18-year-old cousin, Hanora “Nora” Hegarty, joined him for the trip. As they climbed aboard, their family gave them a warm send-off, and his mother handed him a bottle of holy water as a parting gift to help keep him safe. 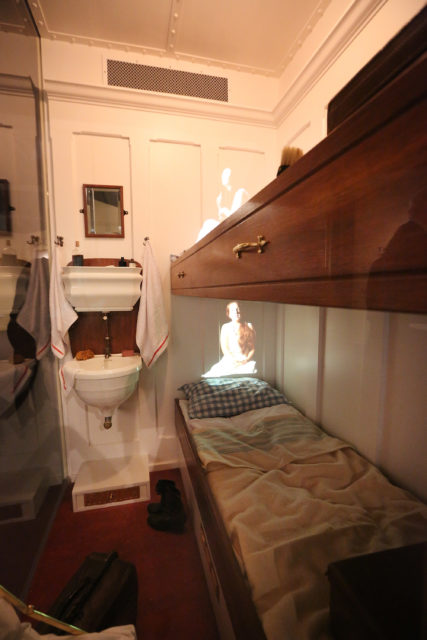 Computer video projections of passengers are displayed in a recreation of a third-class cabin at the Titanic Belfast visitor attraction on March 27, 2012 in Belfast, Northern Ireland. (Photo Credit: Peter Macdiarmid / Getty Images)

Jeremiah and Nora each paid the equivalent of over $850 for their third-class tickets, and they were going to make the most of their exciting voyage. It wasn’t long until the two had made friends with another third-class passenger, Eugene Daly.

Eugene was a skilled piper from Cork who was making the voyage to start a new life for himself in America. Accompanying Eugene were two female companions, and during the start of the voyage, he treated the large crowd to some songs.

After the Titanic sank, Eugene recounted the experience 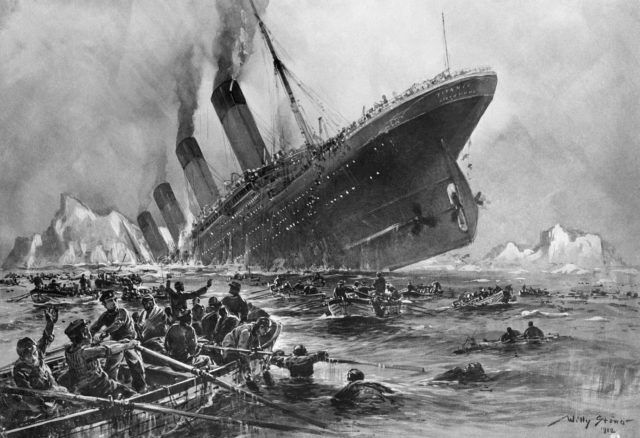 This terrible scene, painted by German artist Willy Stoewer, depicts the sinking of the Titanic, the proud British luxury liner which struck an iceberg off New Foundland, April 14, 1912, carrying 1,517 persons, many of them Americans, to their deaths. It was the supposedly non-sinkable ship’s maiden voyage. (Photo Credit: Bettman / Getty Images)

Eugene was one of the lucky few to survive the sinking of the Titanic. When he returned to land, he spoke with The Daily Sketch to recount what he experienced during the tragedy. When the ship hit the iceberg, he said “I was in compartment 23… steerage… I was in my bunk asleep… a crash woke me up. It nearly threw me from my bed. I got up and went to the door. I put on my trousers and shoes. I met a steward in the gangway. He said there was nothing serious… [So] I went back for a little while. Then I went up on deck as I heard a noise there. People were running around.”

Once it was clear that the ship was going down, Eugene rushed to get his two female companions to the lifeboats. As a man, he had to figure out a different solution, although he did note that other men were not as willing to let women and children go first. Some men even tried to push through and get their own spots on the lifeboats. 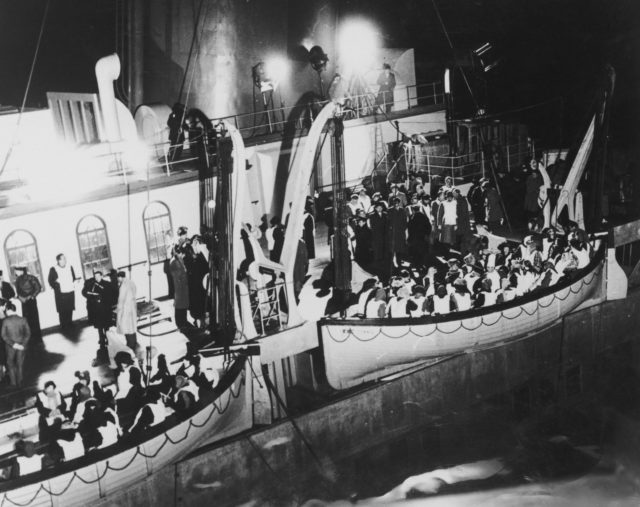 Overcrowded lifeboats are lowered from the stricken Titanic in a scene from Roy Ward Baker’s 1958 film ‘A Night To Remember’, based on the sinking of the White Star liner on 14th April 1912. (Photo Credit: John Pratt / Keystone Features / Hulton Archive / Getty Images)

Eugene explained, “Two men tried to break through [the crowd], and [an officer] shot them both. I saw him shoot them. I saw them lying there after they were shot. One seemed to be dead. The other was trying to pull himself up at the side of the deck, but he could not… Afterward, there was another shot, and I saw the officer himself lying on the deck. They told me he shot himself.”

Eugene ultimately ended up diving off the ship and into the freezing water, and miraculously found a collapsable raft that he and other swimmers were able to flip and climb into, surviving the night until rescue finally came. He recalled seeing the Titanic as it continued to sink. “As I stood on the craft, I saw the ship go down,” he said. “Her stern went up and she gradually sunk down forward, her stern stuck up high.” 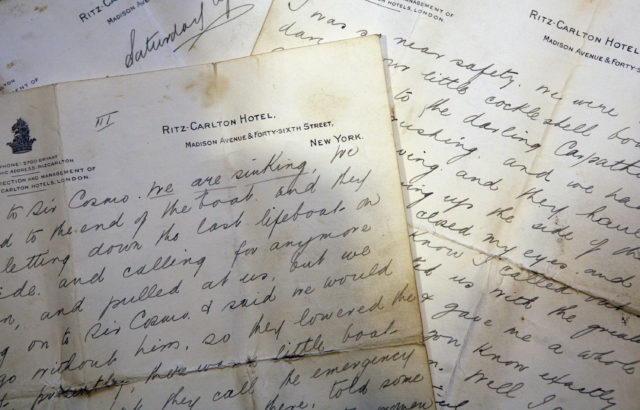 In all the panic, Jeremiah remembered how his mother had gifted him a bottle of holy water, and in a moment of desperation, he grabbed a scrap piece of note paper and wrote a short letter. He stuffed the letter inside the glass bottle and threw it overboard into the Atlantic.

While Eugene was one of the lucky ones to survive the sinking of the Titanic, Jeremiah and his cousin Nora were not so lucky. The two of them would eventually perish in the disaster, along with the 75 percent of third-class passengers who also did not survive the sinking. Second- and third-class passengers fared slightly better, with 41 percent and 62 percent surviving the tragedy, respectively.

The letter washed ashore and was brought to his family 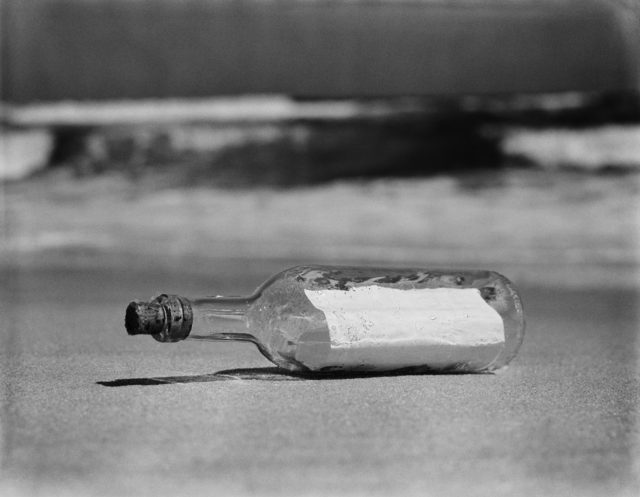 While families waited and hoped to hear word from their loved ones who were aboard the Titanic, that little bottle that Jeremiah sent slowly made its way back to Europe. It eventually washed up on the shore of a pebble beach in Dunkettle, County Cork, in the summer of 1913. A postman walking his dog stumbled upon the little bottle and brought it to the Irish authorities.

The message that Jeremiah had written was simple. It read, “From Titanic, Goodbye all, Burke of Glanmire, Cork.” Along with the signing of his family name to identify who wrote the note, Jeremiah tied the little bottle with one of his shoelaces. It was not confirmed that Jeremiah had perished in the sinking, and his mother had not heard of this until she “was at a removal several days later when a person came up to her and said ‘I’m sorry for your loss.’ It was only then that she found out what had happened.”

His mother confirmed that the bottle was the same one that she had given him as a parting gift, but apparently, she did not get to see the message inside.

What happened to Jeremiah’s note? 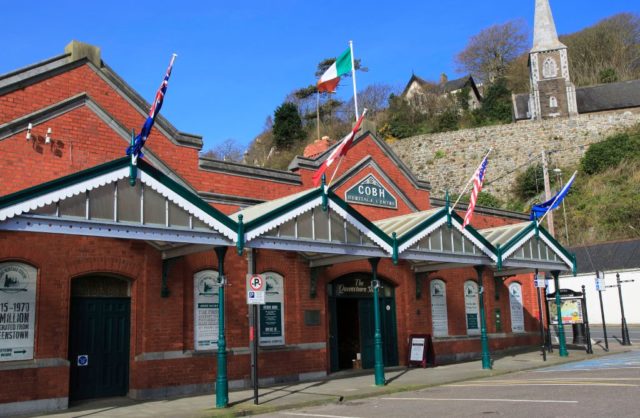 Although officially, Jeremiah’s mother died of cancer within a year of finding out her son had perished in the sinking of the Titanic, one of Jeremiah’s nieces said she “died of a broken heart.” The bottle and the note remained in the family as a treasured heirloom for decades, until his niece decided to finally donate it.

More from us: What Happened To The Bodies From The Titanic?

Now, the bottle and the note are on display at the Cobh Heritage Centre in County Cork.

« Phoenix: The Powerful Symbolism of the Mythical Firebird
Unexpectedly Bizarre Photos of Historical Figures and Celebrities »