Did Jenny, the Cat Onboard the Titanic, Predict the Ship’s sinking?

For an animal notoriously known for hating water, cats have a long history of joining their humans at sea. They are mainly brought on board for their skills catching mice and rats, a practice that dates back as far as Ancient Egypt. Black cats, in particular, were seen by British and Irish sailors as a source of good luck for their journey.

Although these cats were given “jobs,” many of them were loved and spoiled by the crew, as they were a great source of entertainment on long voyages. Several ship cats even became famous, like Jenny, who joined the crew of the Titanic and is said to have predicted the ship’s sinking.

Jenny was transferred from the Olympic, Titanic’s sister ship, to the Titanic. She was one of the mousers on the ship, although there were likely more on board for such a large vessel. These cats were allowed to roam free around the ships and kept vermin away from the food supplies. Before the ship set sail for New York, Jenny gave birth to a litter of kittens. She set up her family by the ship’s kitchen, where the staff fed them all on scraps. 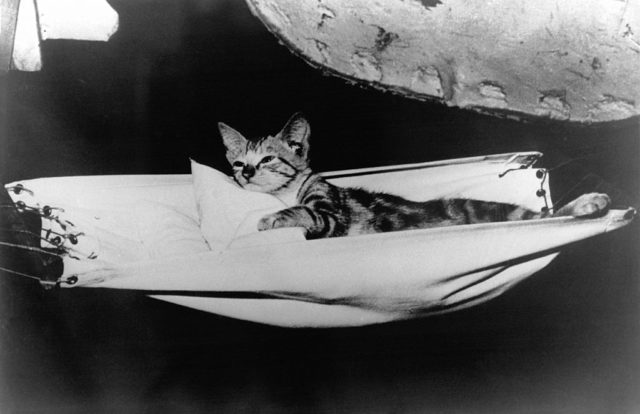 Sleeping cat in its own hammock on a ship, August 1956. (Photo Credit: Keystone-FranceGamma-Rapho/ Getty Images)

Apparently, she was very affectionate toward Jim Mulholland, who worked as a stoker during the ship’s sailing trials from the Irish Sea to Southampton, and would seek him out for attention. Stories of what happened to Jenny and her kittens vary greatly between sources. Some believe that they went down with the ship, but Mulholland had a different version of events. 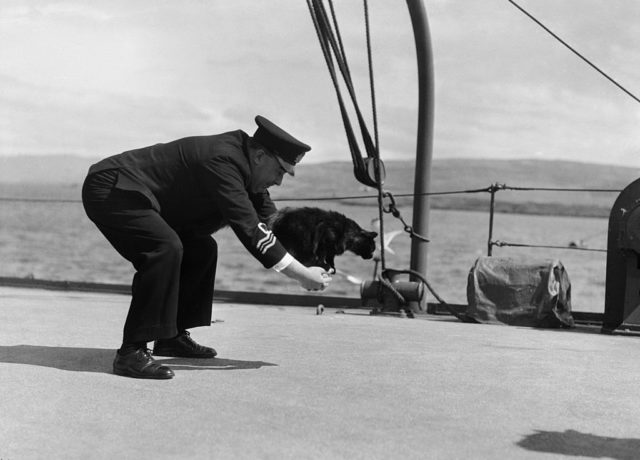 He claimed that when the Titanic docked in Southampton, where it would depart on its cross-Atlantic voyage, he saw Jenny move her kittens off the ship. He thought that this was a bad omen and also decided to leave the ship. Turns out, their instincts were spot on. If Mulholland really did follow Jenny and her kittens off the ship, then the cat saved his life as he likely would have gone down with the ship.

While it is believed that Jenny and her kittens survived the ship’s sinking, there are some animals that are confirmed to have made it out alive. First-class passengers were allowed to bring their dogs on the ship, which some did. When the ship set sail, there were at least 12 dogs on board, three of which survived. The survivors were all small dogs, two Pomeranians, and one Pekingese, so they were easily hidden in the blankets or coats of their owners and smuggled onto the lifeboats. 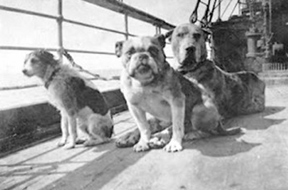 Dogs onboard the Titanic. The Great Dane in the rear on the right is assumed to be Ann Elizabeth Isham’s dog. (Photo Credit: Unknown Author/ Wikimedia Commons/ Public Domain)

Many of the other animals weren’t so lucky, especially the larger ones. Ann Elizabeth Isham, who brought her Great Dane on the voyage, was one of five female first-class passengers who died on the Titanic. She refused to leave her beloved dog behind, and he was evidently far too large to fit on any of the lifeboats or be hidden away under a coat. Instead, she stayed with him and sources say that her body was found by a recovery ship with her arms still wrapped around him.

More from us: What Happened To The Bodies From The Titanic?

Sadly, many other animals didn’t survive the sinking. There were also chickens and various birds on board, as well as other cats. One woman, Ella Holmes White, was importing poultry back to the US from France, and Elizabeth Ramel Nye was traveling with her yellow canary.