Discovery of Unknown Fossil in Museum is Changing the History Books

Paleontologists recently unearthed a rare fossil for the second time – but this time around, it was buried in papers and other artifacts instead of dirt. The unidentified fossil of a pre-historic bird distantly related to modern-day turkeys and grouses has been at the Bruce Museum in Greenwich, Connecticut for decades, but it was finally given a name inspired by one of the museum’s patrons.

The Journal of Paleontology announced in October 2022 that the fossil would be given the scientific name Centuriavis lioae. The bird’s new moniker honors the managing director and chief operating officer of the Bruce Museum, Suzanne Lio. The fossil was first unearthed nearly a century ago in a Nebraska quarry. Scientists believe the bird discovered in 1933 roamed what are now the plains of the American midwest 11 million years ago.

The fossil was never properly studied until recently when paleontologists Daniel Ksepka and Kate Dzikiewicz used high-tech tools to reconstruct the shape of the creature’s brain and examine its unique skeletal features.

Their findings proved a hypothesis that will rewrite the archeological record about Centuriavis lioae‘s relatives, grouse and turkeys. Ksepka and Dzikiewzicz used the fossil to prove that Centuriavis lioae is the oldest relative of modern fowl species, likely diverging from an earlier species that split off and arrived in North America from Asia.

The fossilized bird likely died due to climate

According to Ksepka, it’s not rare for fossils to be lost in museum storage for decades. “I’ve seen fossils sitting in newspaper from the Civil War,” he told Hyperallergic. “There just aren’t that many paleontologists in the world.” This adds to the difficulty of finding specialists to research rare or previously unknown species like what was found at the Bruce Museum. 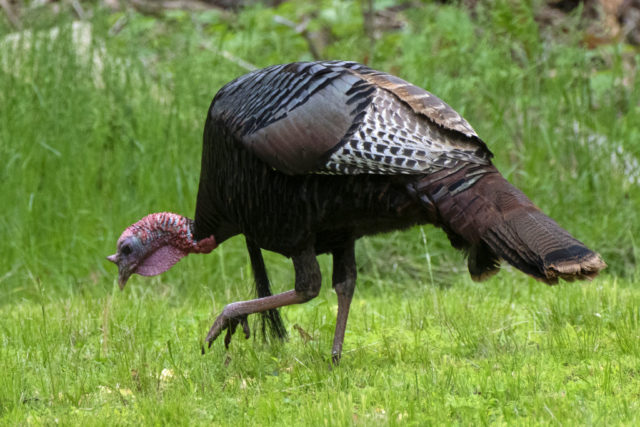 There is still plenty of work to be done on the fossil in order to determine how long the species lived, and when and why it went extinct. Ksepka believes the bird died out due to cooler temperatures after the area turned from a savannah-like ecosystem to the cooler prairie climate Nebraska still has today – a change that occurred eight million years ago. With cooler temperatures, species adapted to survive, leading to more cold-tolerant birds like the grouse.

CT scans of the fossil also revealed that Centuriavis lioae had a less developed brain than its contemporary cousins. The scans showed that the bird had a larger optic lobe and smaller olfactory bulb, suggesting it had improved eyesight but a poor sense of smell.

More from us: Female ‘Vampire’ Discovered Pinned to the Ground With Sickle in Polish Graveyard

As for Lio, whose name will be immortalized in future textbooks as the inspiration for Centuriavis lioae‘s name, she is “so thankful to have even been considered for this honor. I’m truly blessed to work for the Bruce Museum where I’m surrounded by such an incredible, dedicated team of employees,” Lio told the Connecticut Post. “This is really a celebration for all of us at the Bruce.”