The wedding of President Joe Biden’s granddaughter Naomi on November 19, 2022, marked the 19th wedding held at the White House. Over the years, many important presidential figures and their loved ones have married in historic spaces like the East Room, Blue Room, and the romantic Rose Garden.

Let’s take a look at eight of the most beautiful times when the bride and the house both wore white. 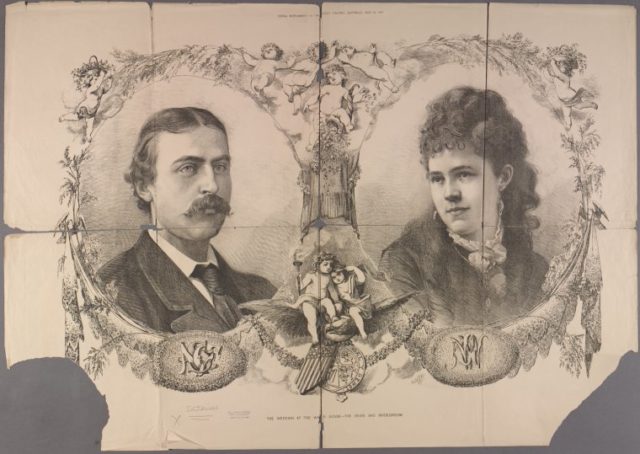 Nellie Grant, the daughter of the 18th President Ulysses S. Grant and First Lady Julia Grant, married Englishman and heir to his family’s fortune Algernon Sartoris on May 21, 1874, in the East Room of the White House. The wedding was said to be lavish and tasteful. The walls, staircases, and chandeliers of the White House were decorated with lilies, tuberoses, and spirea, along with fragrant orange blossoms shipped from Florida.

Two hundred and fifty guests were in attendance as President Grant walked Nellie down the aisle in a stunning lace gown reportedly worth thousands. The bride was described as “probably the most attractive of all the young [women] who have ever lived in the White House.” Unfortunately, the newlyweds did not have a very blissful marriage.

Sartoris was an alcoholic who could barely provide for his wife and their four children. In 1889, Nellie was granted a divorce from him and returned home to America from England. Sartoris died four years later at 42, leaving Nellie free to remarry. She married Frank Hatch Jones in 1912, the couple were happily married until Nellie’s death ten years later. 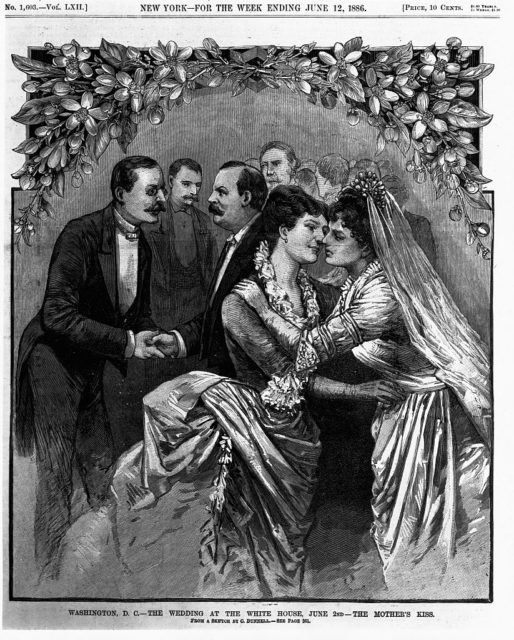 Grover Cleveland, who served as the 22nd and 24th president of the United States, is the only president to ever be married at the White House. Cleveland married Frances Folsom – who was 27 years his junior – on June 2, 1886, in the Blue Room. Cleveland had come into office a bachelor, but soon found his first lady in Frances.

Frances was just 21 when she married Cleveland, making her the youngest first lady in history. The Clevelands had five children together, including their second daughter Esther – the only child of a president to be born in the White House. 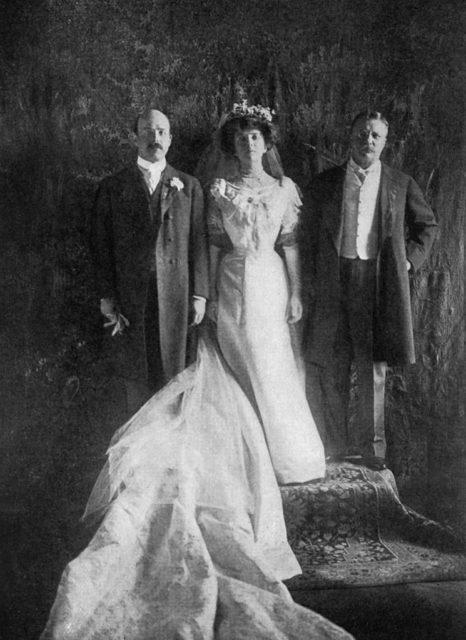 Alice Lee Roosevelt, the daughter of President Theodore Roosevelt, married Ohio Representative Nicholas Longworth III in the East Room of the White House in February 1906. The wedding was the biggest social event of the season, attended by over a thousand guests. The bride wore a blue wedding dress, a nod to her untraditional, innovative, and daring personality.

The bride even cut the wedding cake entirely in half with a sword. “Let somebody else do the rest” she laughed afterward. Alice Roosevelt’s wedding is still considered one of the most iconic and wild White House weddings. 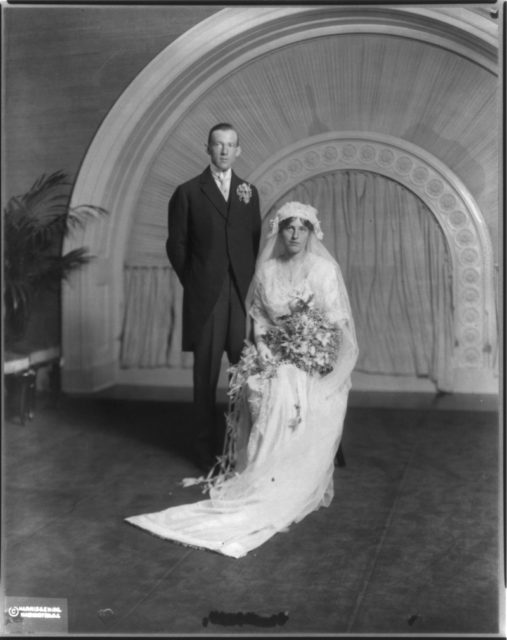 Jessie Woodrow Wilson, the second of three daughters of President Woodrow Wilson and First Lady Ellen Wilson, married Harvard Law graduate and district attorney Francis Bowes Sayre in the East Room on November 25, 1913. With a strict guestlist of 400 people, the wedding was considered to be small and intimate at the time, while other details spared no expense – like the 135-pound wedding cake. 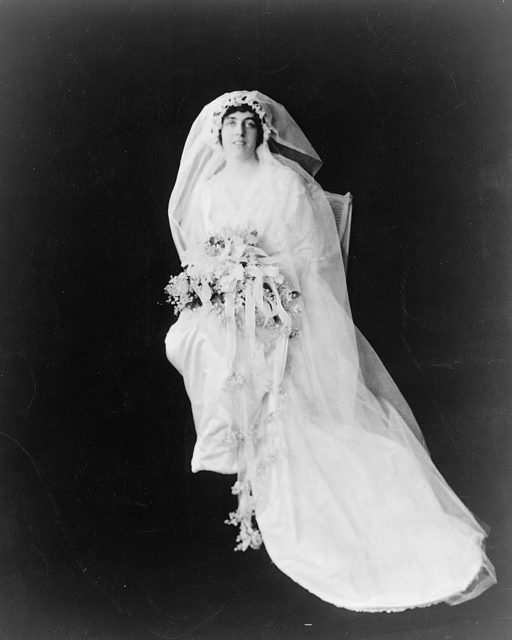 President Woodrow Wilson’s youngest daughter Eleanor also married at the White House. Eleanor married Secretary of the Treasury William Gibbs McAdoo on May 7, 1914, in the Blue Room. The wedding garnered significant media attention because of their 26-year age gap. McAdoo also had several children close in age to his new bride which contributed to the scandalous nuptials. 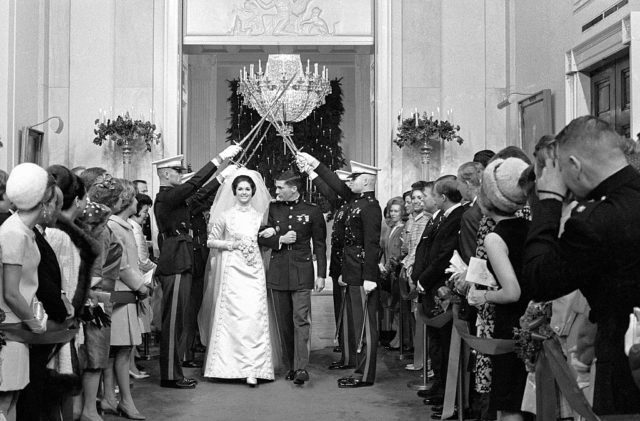 Marine Captain, Charles Robb, and his bride Lynda Johnson walk through an arch of drawn swords as they leave the East Room of the White House following their wedding ceremony. (Photo Credit: Bettmann / Getty Images) 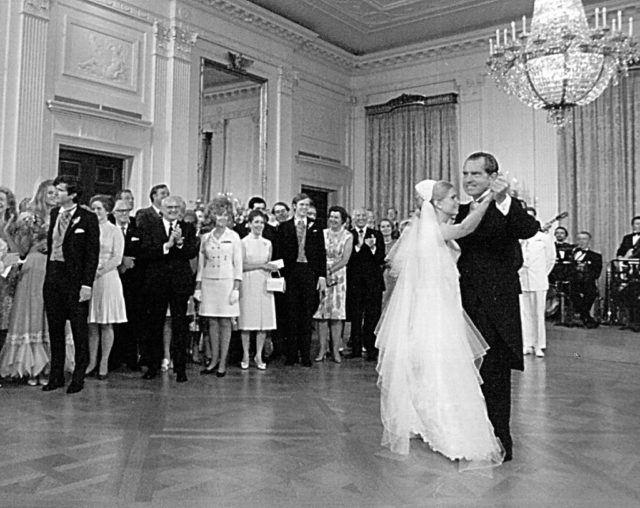 President Richard Nixon and First Lady Patricia Nixon’s daughter Tricia married Edward Finch Cox on June 12, 1971, in the 16th ceremony to take place at the White House. Tricia was the first bride to be married at the Rose Garden, which was redesigned by President John F. Kennedy in 1961 to allow space for large gatherings like weddings. 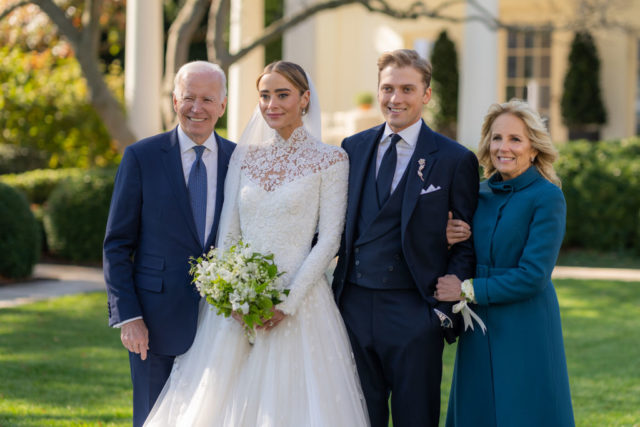 In this handout provided by The White House, President Joe Biden and First Lady Jill Biden attend the wedding of Peter Neal and Naomi Biden Neal on the South Lawn of the White House on November 19, 2022 in Washington DC. (Photo Credit: Adam Schultz / The White House via Getty Images)

Nearly a decade after the last White House wedding in 2013, Naomi Biden – the granddaughter of President Joseph Biden and First Lady Dr. Jill Biden – married Peter Neal in a lavish and regal ceremony on the South Lawn on Saturday, November 19th, one day before President Biden’s 80th birthday.

More from us: Alice Roosevelt: The First Daughter Who Climbed Onto the White House Roof and Buried a Voodoo Doll in the Yard

The bride’s dress drew inspiration from classic brides like Grace Kelly, with some saying the Biden wedding is the closest thing to a royal wedding to happen in the United States. The newlyweds also currently call the White House home, residing in an apartment on the third floor.