In his book Fox Tossing, Octopus Wrestling and Other Forgotten Sports, Edward Brooke-Hitching has brought together a wealth of bizarre sports and pastimes from history that seem just bonkers today.

We’ll take a look at ten of the strangest in the below, along with an extra one that we at TVN just love. 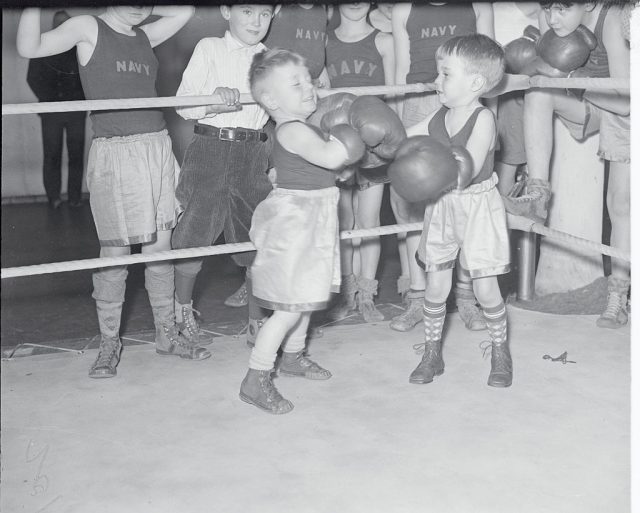 A Right To The Rompers. Gordon Baird White (Left), 3, and Toddy Carroll, 4, start swinging with right and left during a scrap at the U. S. Naval Academy in Annapolis, Md. (Photo Credit: George Rinhart/Corbis via Getty Images)

When Spike Webb became a boxing coach at the United States Naval Academy in 1919, he decided to establish the Navy Junior Boxing Program for the sons of officers and civilians serving there.

He would train boys aged 5-11 years old over several weeks until they participated in the Navy Junior Boxing Finals. The journalists who filmed the tournaments nicknamed the fights “baby boxing.”

Such competitions continued each year until the late 1970s. 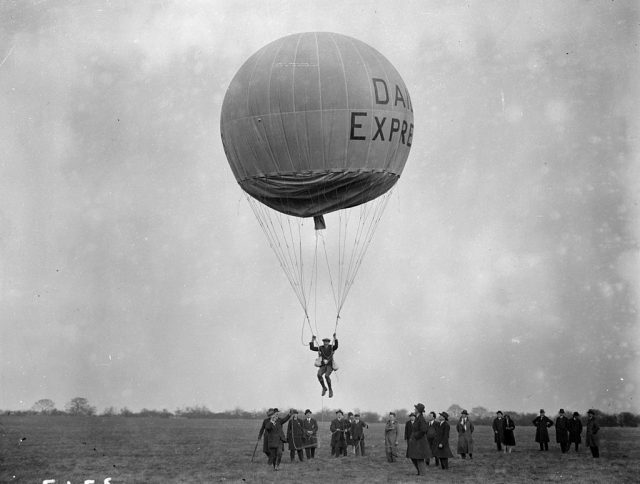 Balloon jumping at Stag Lane Aerodrome. The participant is suspended in a harness under the balloon which appears to be sponsored by the Daily Express newspaper. (Photo Credit: Fox Photos/Getty Images)

Balloon jumping isn’t quite like parachuting or ballooning, but a mixture of the two. Rather than a basket attached to a sizeable hot-air balloon, a smaller balloon filled with helium is attached to a single person.

While the giant bag of air provides the individual with a little bit of lift, it’s not enough for sustained flight like in a traditional hot-air balloon. Instead, the “jumper” or “hopper” has to use his leg muscles to propel himself up and over any obstacles in his way.

The craze for this new sport began in the USA around 1923, spreading to England a few years later. Unfortunately, balloon jumping could be pretty dangerous. The most famous balloon jumper was Aircraftman Dobbs, a British parachutist in the Royal Air Force. When balloon jumping at Stag Lane aerodrome in north London, his feet became entangled in some electrified cables. When he tried to free himself, he died instantly. 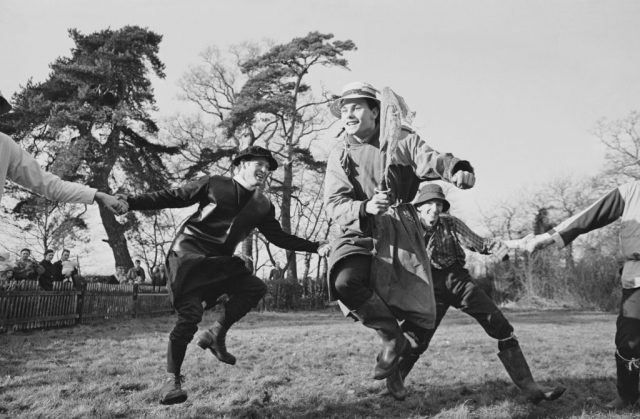 The word “dwile” comes from the Dutch word dweil meaning “mop.” In this peculiar pub sport, two teams of twelve would take it in turns to dance while a member of the other team tried to hit them with a beer-soaked dwile.

One team would nominate a person to be the “flonker.” The other team would then make a circle around the flonker and start to dance in one direction, accompanied by music. The flonker would dip the dwile into some beer and attach it to the end of a broom handle. He would then move in the opposite direction to the dancers.

When the music stopped, the flonker had to try and hit one of the opposing team with his dwile. The highest points were awarded for a hit to the face.

The winning team would be awarded an ornate gazunder – otherwise known as a chamberpot. 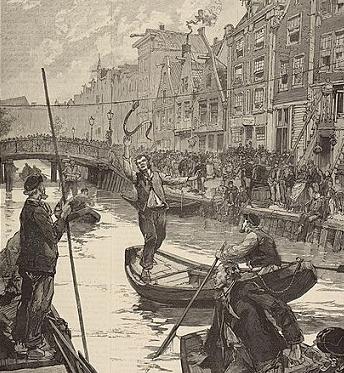 Palingtrekken is the game of eel-pulling that was popular in Amsterdam in the 19th century. A live eel was caught and then hung from a rope, which was stretched across a canal. Players would row their boats underneath and try to grab the eel – a tricky task that meant they often ended up in the water. Sometimes the eel would be greased with soap to make it even harder.

The sport was banned by the government as being “cruel public entertainment.” However, it remained popular with the populace, and an illegal game of it was started on July 25, 1886, as part of a local fair in Jordaan. When the police tried to break it up by cutting the rope, the public turned on them, and the whole event turned into a full-scale riot. 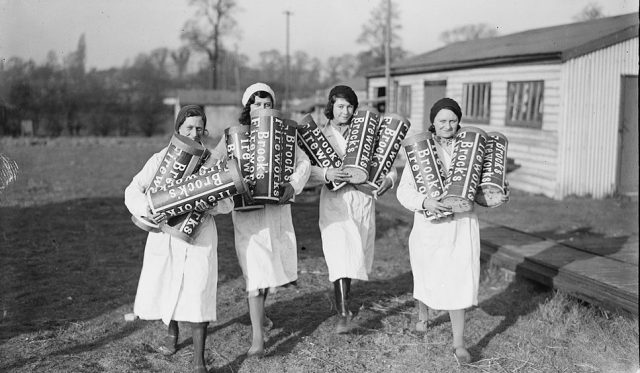 Brock’s Fireworks in Whitechapel, London, was founded in 1698, making it England’s oldest firework company. The company struck a deal to put on a free public firework show at the Crystal Palace each year.

One of the more unusual (but highly popular) events was their living firework display. Employees dressed in asbestos suits would have fireworks attached to them. When the fireworks were lit, the men would be obscured by the bright background, and it would seem to the crowd as if the “firework men” were really sparring against each other. 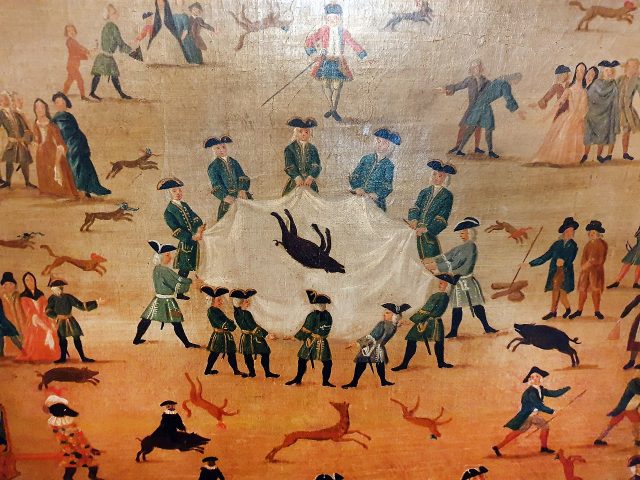 This particularly brutal sport made it even less likely that the fox would survive than if it had been pursued by hounds.

A caged fox would be released into an arena where it would run across a “bouncing cloth” – a webbed or cord sling stretched between two people. As the fox ran over it, the two people would pull, sending the animal high into the air. The team that managed to toss the fox the highest would be the winners. The biggest loser was the fox; if it wasn’t killed by the fall, then it would likely be clubbed to death later on.

Experts could get the fox to fly as high as 24 feet (7.5 meters). The sport was especially popular between married couples where the rivalry would add to the fun.

However, this sport was not without its human cost, as the terrified foxes might turn on the humans.

Other animals such as boars, badgers, and hares were also used. However, one writer noted how wildcats were not popular among players because “they cling to the tossing-slings for dear life, and it is next to impossible to give one of these animals a skillful toss.” 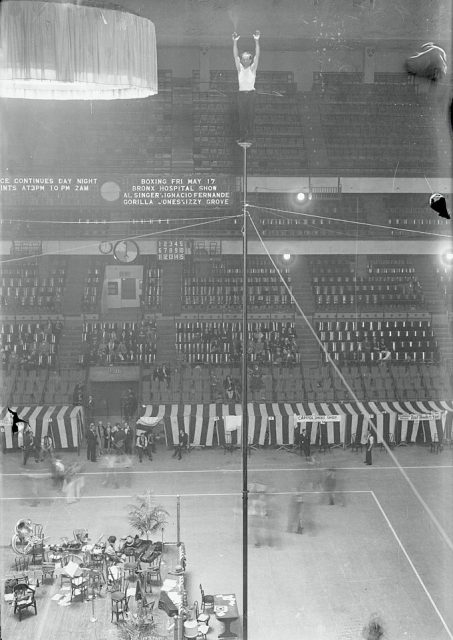 Not so much a sport as an endurance event, flagpole sitting was pioneered by Alvin “Shipwreck” Kelly. Having been a steeplejack, high diver, boxer, and a licensed pilot who performed aerial stunts, Kelly had no fear of heights.

In 1924, he set a record by sitting atop a flagpole for 13 hours and 13 minutes. Sources debate whether he did this as a publicity stunt for a department store or in response to a friendly bet.

That was just the start of it. He kept sitting atop poles for longer and longer stretches, culminating in a world record of sitting on a flagpole in Atlantic city for 49 days and one hour.

Perhaps the most visually impressive stunt, however, took place on October 13, 1939. He balanced on his head at the top of a pole in East 42nd Street in Manhattan. While doing so, he ate 13 donuts that had been dunked into a cup of coffee and fed to him. While the donuts were included to celebrate National Donut Dunking Week, being upside down at such a height was allegedly to show his disdain for the idea of bad luck on Friday 13th. 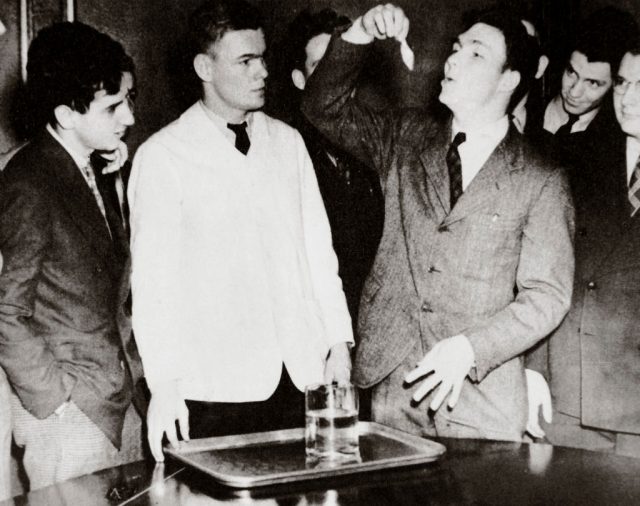 Goldfish swallowing was a student craze that took on a life of its own among American universities in 1939.

It all began with Lothrop Withington Jr., a student at Harvard University who was running for class president. For some unknown reason, he was convinced that his bid for power would be enhanced if he could swallow a live goldfish for a payment of $10 in front of an audience of 100 students.

One source suggests that he practiced in the run-up by eating baby goldfish and tadpoles, and that his motivation was revenge on behalf of Jonah, who was swallowed by a giant fish. Other sources suggest the bet was made because he bragged he’d done it before.

University rivalry being what it was, two weeks later, Frank Pope of Franklin and Marshall College swallowed three goldfish. Back at Harvard, Irving M. Clark responded by swallowing 24 goldfish.

As the craze hit the headlines, doctors warned that swallowing goldfish whole could put a person at risk of tapeworm and anemia, but still, there were some students who were tempted to have a go at setting a new record.

The identity of the final record holder is uncertain. The Smithsonian suggests that it was  Joseph Deliberato of Clark University, who swallowed an astonishing 89 goldfish. The National Museum of American History website would have us believe that the final number was 101 goldfish. In his book, Brooke-Hitching states that the final record was 210 fish before the fad burned itself out. 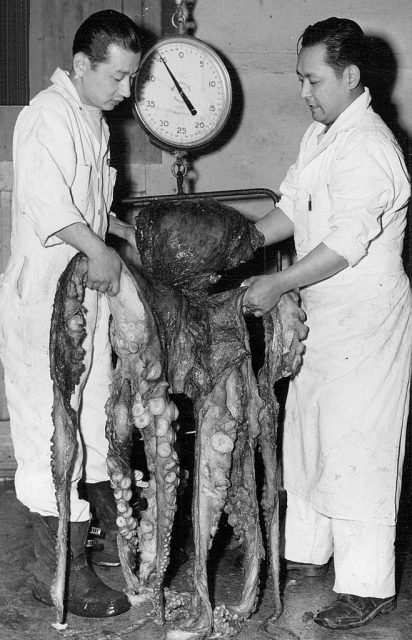 If you’re imagining man versus octopus in some undersea contest where the winner gets thrown to the seabed, you’re not quite on the right lines. The actual way for a man to win such a wrestling match was to wrestle the octopus onto dry land.

This sport became popular in the 1960s along the West Coast of the United States. There was even a world championship event held in Puget Sound, Washington, in 1963. The winner was a team from Portland, Oregon, that caught an 80-pound octopus.

After the event, those octopi that had been wrestled to land were either released, given to an aquarium, or were eaten.

As well as attracting around 5,000 spectators, the championship was televised, and snippets from the original TV broadcast can be seen in this video by Ripley’s Believe It or Not! channel. 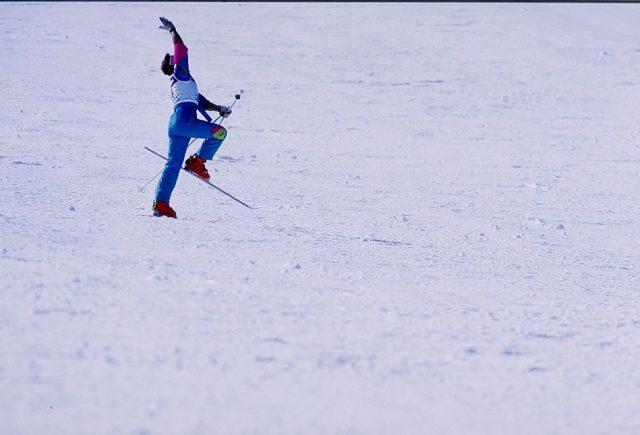 When it comes to skiing, there are all sorts of subcategories. But one of the most peculiar styles has to be ski ballet.

Also known as “snow dancing” or by the more neutral term “acroski,” a ski ballet display would last 90 seconds and incorporate elements from figure skating and gymnastics as well as classical ballet.

As well as new moves on the ski slopes, Brooke-Hitching describes some of the sensational costumes on display: “competitors roamed the slopes in capes, headbands, shoulder pads, matador costumes, sequins, puffy sleeves, spandex and glitter gloves.”

Although it was included as a demonstration sport in the 1988 and 1992 Olympics, ski ballet gradually faded away. 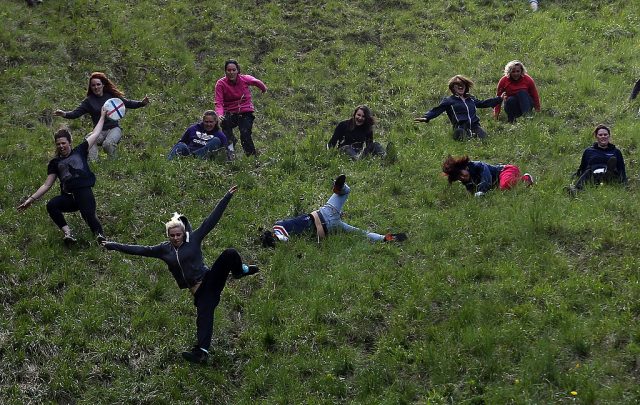 Contestants in the women’s race chase a replica Double Gloucester Cheese down the steep gradient of Cooper’s Hill during the annual Bank Holiday tradition of cheese-rolling on May 27, 2013 in Brockworth, Gloucestershire, England. (Photo Credit: Matt Cardy/Getty Images)

Although not included in Brooke-Hitching’s book, we think this is one of the craziest sporting events ever. And the best bit is… this still happens every year!

Cooper’s Hill Cheese-Rolling and Wake takes place every spring bank holiday at Cooper’s Hill in Gloucestershire, England. It’s uncertain how or when this tradition started, but some think it could be around 600 years old.

A round of Double Gloucester cheese is taken to the top of the 200-yard-long hill and set rolling. Immediately after that, participants race down the hill after the cheese. The winner is the first one to the bottom and he or she gets the cheese.

Weighing around 7-9 pounds (3-4 kilograms), the cheese can reach speeds of up to 70 miles per hour (110 kilometers per hour). Because it is heavy and fast enough to cause serious injury to anyone it hits, the cheese was replaced by a foam replica in 2013.

Even with that adjustment, the event often results in injuries and even hospitalization. Members of the local rugby club and Young Farmers attend the event to “catch” anyone who loses their balance on the way down and also to carry any participants who injure themselves to the bottom of the hill where there are ambulances waiting.

More from us: Alexander the Great Once Held a Drinking Competition – All the Contenders Perished

What started out as a quaint local tradition has grown into an event that has seen competitors attending from as far away as Canada, Australia, New Zealand, and Nepal. It featured in an episode of the 2020 Netflix documentary We are the Champions, and it was even a subplot in season 14 of the popular TV drama ER in 2007.

« No Waste Management Required For These Facts About ‘The Sopranos’
Glitz, Glamour, And Gossip: The Spiciest Socialite Scandals Throughout The Years »