Behind-the-Scenes Photos of Disneyland and the Stories They Share

When you think of Disney, what comes to mind are its nostalgia-inducing stories and out-of-this-world characters. Many children dream of visiting its theme parks, especially Anaheim’s Disneyland. As the following vintage photos show, a lot of work goes on behind the scenes to ensure each guest’s experience is as magical as possible.

It’s a small world after all

One of the most iconic rides at Disneyland is It’s a Small World. Located in Fantasyland, the ride is one of the few to appear at Disney parks across the world. It features over 300 animatronic dolls, but have you ever wondered who was tasked with dressing them all? 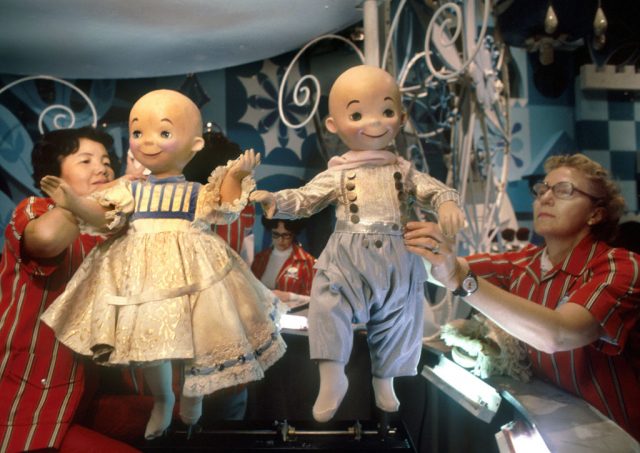 As it turns out, employees spent hours ensuring these dolls were dressed to impress. It takes a lot of effort and dedication to make one of the world’s most popular amusement park rides what it is.

From scary robot to Abraham Lincoln

The creation of the Great Moments with Mr. Lincoln attraction involved a lot of engineering. Thankfully, Disneyland has many engineers whose jobs are to ensure that attractions run smoothly. As the following images show, the animatronic version of Abraham Lincoln began as a creepy robot. 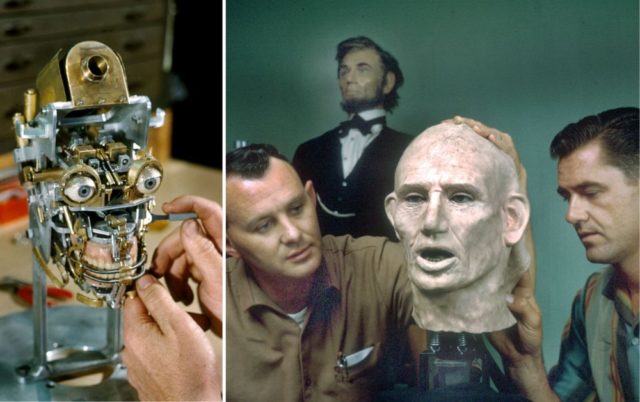 Walt Disney initially planned a show with talking and moving wax figurines of all the presidents. However, the technology was too expensive, so he settled on creating a single figure: Lincoln. After seeing how popular the attraction was, the decision was made to create the Hall of Presidents at Disney World in Florida.

The Matterhorn Bobsleds is among the most popular Disneyland attractions. It’s made up of two rollercoasters traveling on the Fantasyland and Tomorrowland tracks, winding their way through the park’s replica of the Matterhorn. 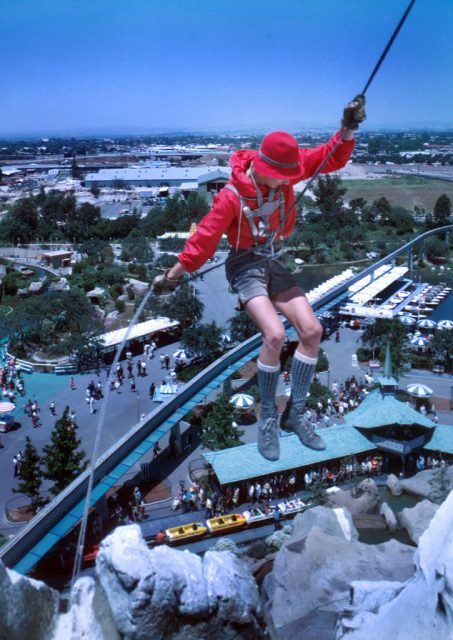 Disneyland employs actual mountain climbers to scale the Matterhorn, giving the impression it is a real mountain. Not a job for the faint of heart, it also involves donning traditional Swiss clothing to ensure climbers are really able to sell their roles.

Walt Disney was heavily involved in every aspect of his vast empire, including what went on in the parks. In this photo, he and Disneyland engineer Louie Francuz inspect the animatronics for the park’s new African Safari area of the Jungle Cruise ride. 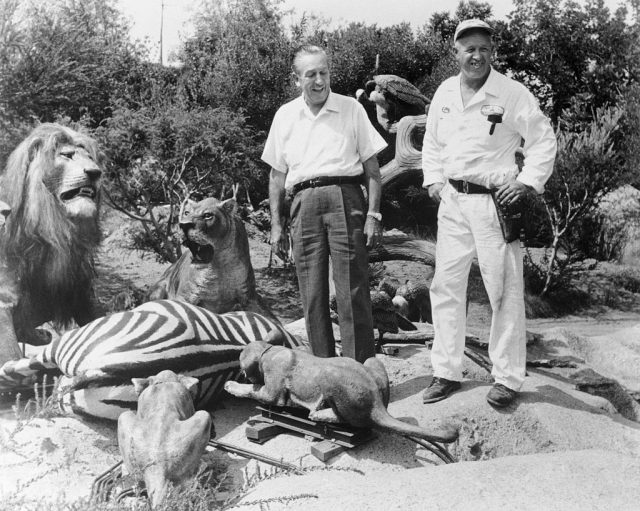 Disney and Fancuz were inspecting the animatronics to ensure they looked realistic enough. We don’t know about you, but we feel the expressions on both the female and male lions look authentic. Pretty impressive, considering this photo was taken in 1964!

The people underneath the costumes

It can get pretty hot under the California sun, so it’s no surprise Disneyland employees will remove their costumes any chance they get. While on break, those playing the parts of Mickey Mouse, Winnie the Pooh, and Robin Hood (among others) will often take off half of their costume, allowing themselves a much-deserved breather. 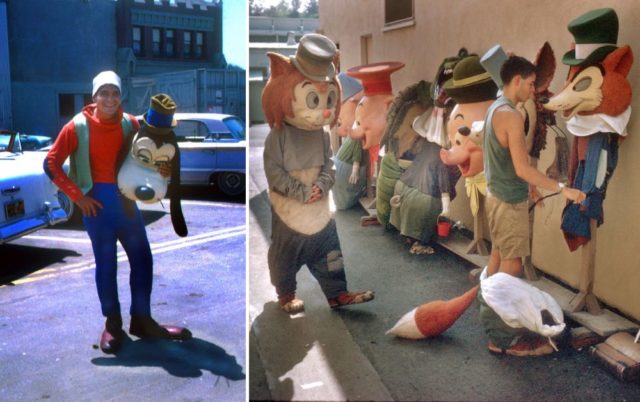 While employees are now barred from taking photos in restricted areas to keep the park’s illusion alive, no such regulations existed in the 1960s, meaning we get this unique glimpse at the actors underneath these iconic costumes!

Anything animatronic is going to experience issues, and as new technology is released, newer props are brought in. This means workers at Disneyland need to swap out the old with the new. As the following image from 1962 shows, the old props ended up in some sort of junkyard – a sad end for attractions that brought people so much joy. 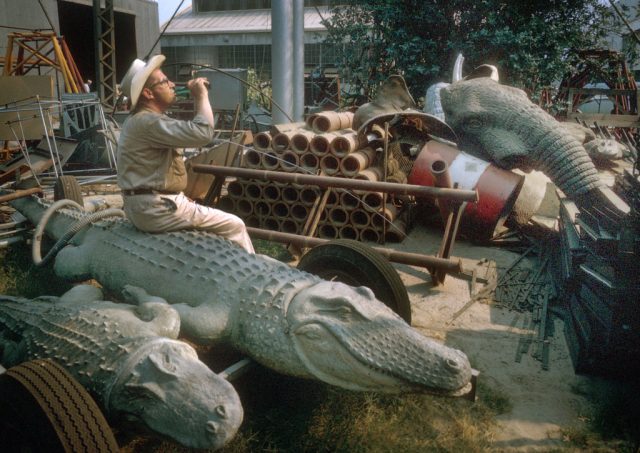 On a more positive note, it appears the park’s staff made use of these old props, even if they were used as places where people could eat and drink while on break.

One of the most beautiful areas of Disneyland was the Blue Lagoon, with its brightly colored art and sculptures. This image from 1962 shows just how much work went into its maintenance. To ensure the proper repairs and restorations could be completed, work crews had to first drain the lagoon, a not-so-easy task. 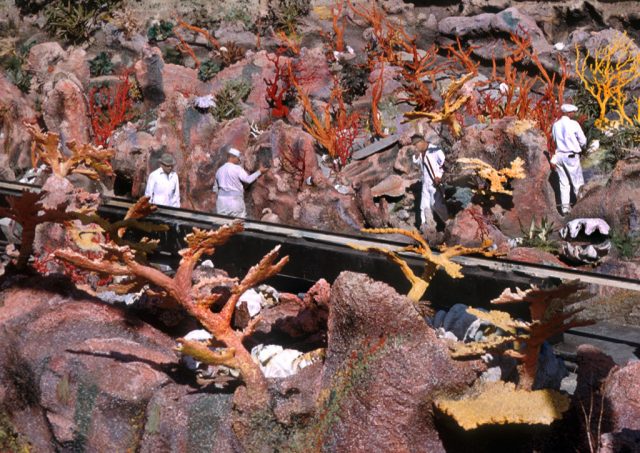 Once the lagoon was drained, workers were able to touch up paint, repair broken pieces, and give the whole place a general once-over. Given the high standards Walt Disney had for his parks, we can only assume this process took place often.

In 1957, Walt Disney invited former child star Shirley Temple to help unveil the grand opening of the Sleeping Beauty Castle walkthrough. Temple got dolled up for the occasion, donning a crown and outfit fit for royalty. 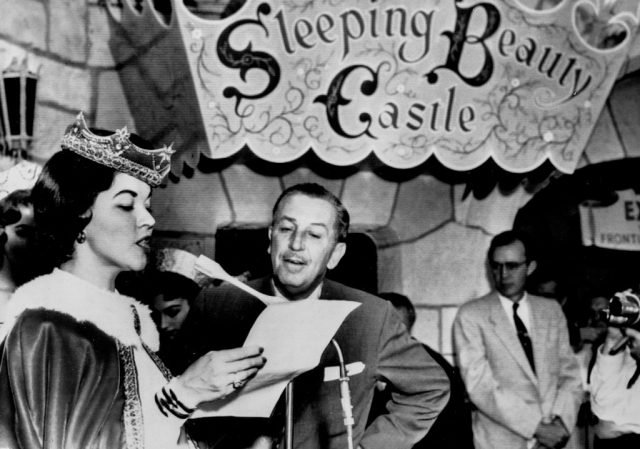 Disney initially had no intention of Sleeping Beauty Castle having its own show, but that quickly changed. Guests were soon able to walk through it, where they encountered miniature dioramas telling the famed tale. Unfortunately for fans, they’d have to wait another two years for the animated film to hit theaters.

While walking through exhibits, we don’t often imagine the amount of work that went into making them as magical as they are. As the following images show, one of the more extensive attractions at Disneyland is the Enchanted Tiki Room. 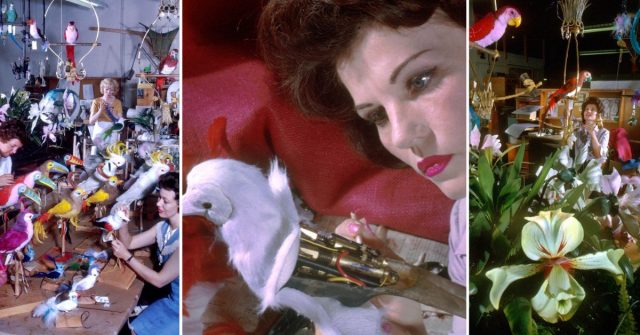 More from us: 10 Disney Characters Inspired By Real People

The exhibit opened in 1963, and in the year or so before, employees prepared all the animatronics and decorations that would make it look as impressive as possible. Some worked on the electronic parts, while others combed the birds’ feathers to give them a more authentic appearance.