Bing’s The Thing When It Comes To Christmas! Festive Facts About Mr. Crosby

Super crooner Bing Crosby is many people’s idea of a Christmas classic. Nobody did it like Bing, with his smooth delivery and seemingly unflappable onscreen persona.

Roast some curious chestnuts on the open fire of enlightenment, as we present some festive facts and more about the late Mr. Crosby.

In case you haven’t heard of it, the Canadian Tuxedo is a snazzy little number made of denim. And it has an unlikely inspiration, in the shape of smartly-dressed icon Bing Crosby.

Boing Boing relayed the story from Levi’s. The company hit on the idea of a denim tux after Crosby was “denied entrance into a Canadian hotel because he and his friend were dressed completely in denim.”

The 1951 incident led to Crosby being presented with a whole new type of jacket. On the lapel was a corsage of Red Tabs (i.e. company labels), with an inside patch explaining denim’s status as a “perfectly appropriate fabric.” 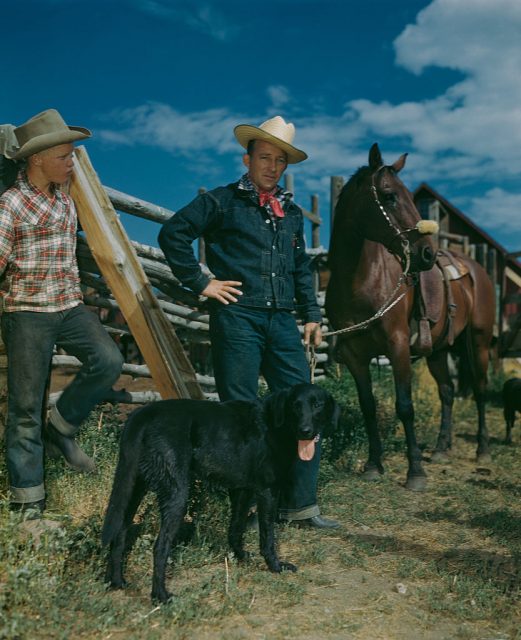 Read all about it

His real name was Harry Lillis Crosby Jr. So where did ”˜Bing’ come from…?

Turns out it was the local newspaper. The Bingville Bugle, part of the Spokane Spokesman-Review, made little Crosby “giggle uncontrollably when reading it,” according to Mental Floss.

When a neighbor branded the comedy fan “Bingo from Bingville,” it laid the groundwork for a world-famous handle. 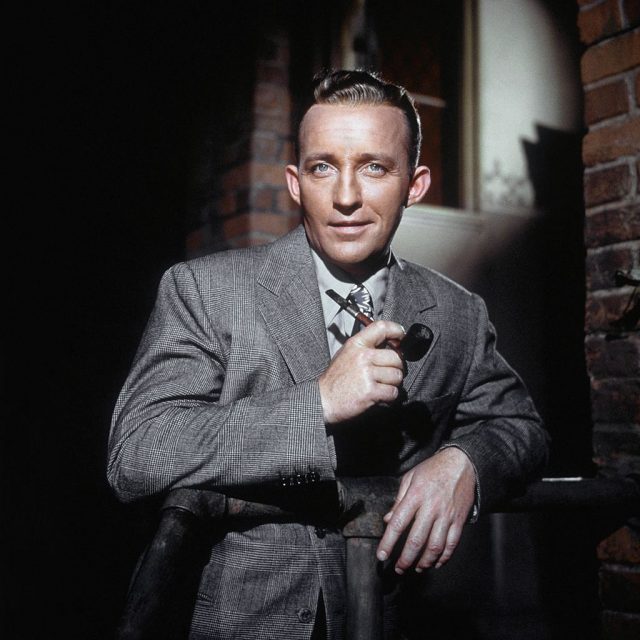 Arguably, Bing’s true passion in life was golf. At one stage he arranged to have his radio shows pre-recorded, so he could get on the course and whack those hole in ones even faster.

Hitting the airwaves was always done live in those days. The industry took a shine to the move, meaning Bing accidentally altered the nation’s soundscape forever.

Not only did Bing play the game whenever he could, he also gave rise to the AT&T Pebble Beach Pro-Am. This started life as the Crosby Clambake tournament. 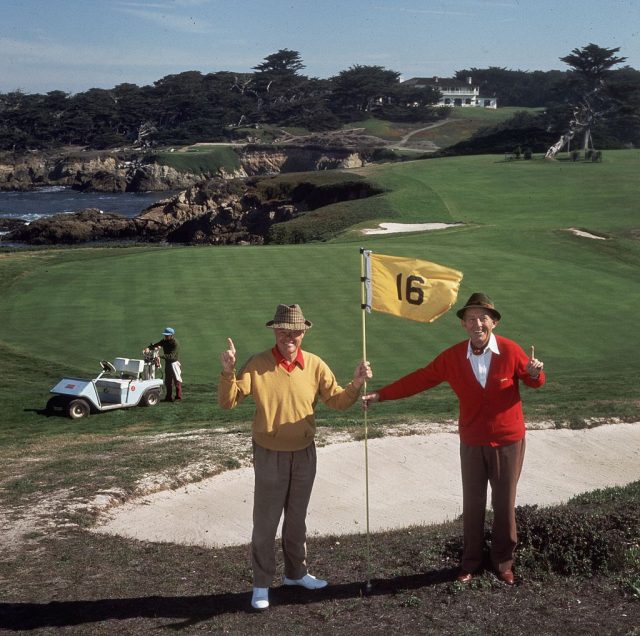 Bing’s son Nathaniel was also bitten by the golf buggy. He won team titles at such as the Eisenhower Trophy (1982), plus the Walker Cup the following year. Not bad at all for someone regarded as an amateur, though he did have a brief career as a pro.

Mr. Crosby crooned “Little Drummer Boy,” as Bowie joined in with a stirring accompaniment of “Peace On Earth.” Things weren’t so smooth-running behind the scenes, however.

As described by Mental Floss, Bowie objected to the producers’ plan of simply singing “Little Drummer Boy.” He felt it “wasn’t really right for him and refused to sing it.” Music men Ian Fraser, Larry Grossman, and Alan Kohan then had to think up an alternative and quick.

Adding to the original track by Harry Simeone, Katherine Kennicott Davis, and Henry Onorati, they produced an unexpected but instant classic. The process reportedly took around an hour!

Bing and the bottle

With a cocktail named in his honor, it’s safe to assume Crosby enjoyed a tipple. He actually enjoyed one a little too much, according to reports. Fortunately, he managed to sober up as he approached the end of his twenties.

His first wife, performer Dixie Lee, wasn’t so fortunate. She drank with Bing and when he stopped, she couldn’t. This is especially tragic as he reportedly cleaned up his act for her.

Fox News quoted biographer Gary Giddins, author of 2018’s Swinging On A Star: The War Years 1940-1956. Giddins states the Crosbys had “a very unnerving home life. He was able to escape it through work, and she wasn’t.” 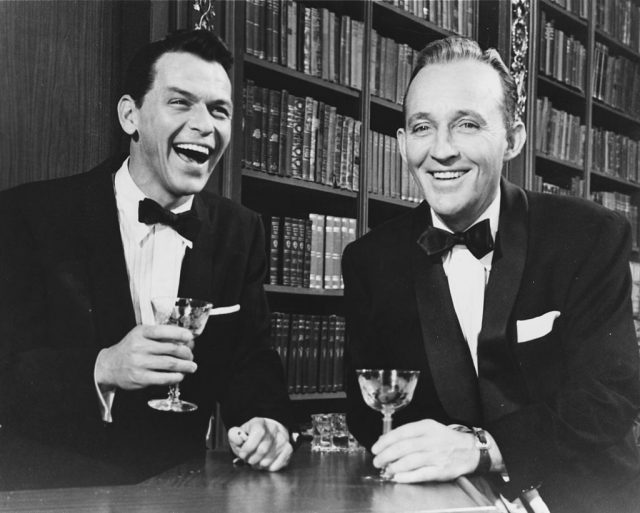 One more thing about Bing

No one played Columbo like Peter Falk. That said, he was on a list of candidates, including one Bing Crosby. Producers wanted Crosby to aggravate and entrap the show’s assorted murderers.

The crooner wasn’t in the mood to be a crime buster. Anyhow, he’d much rather devote his time to another pursuit… you’ve probably guessed it, golf!

Bing was a major asset when it came to boosting troop morale during the Second World War. Naturally, this involved lending his unmistakable tones to propaganda broadcasts.

This led to the Germans giving him the nickname: Der Bingle. It caught on around the world. 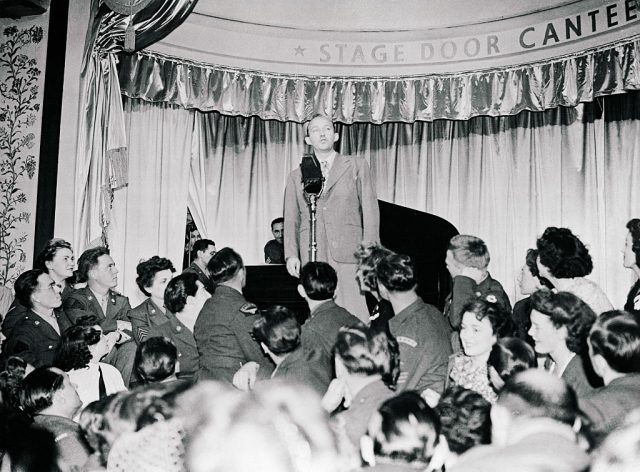 Secret Weapon…Der Bingle. Our own Bing Crosby holds the center of the stage as he croons one of his best numbers for the lads and lassies attending the opening of the stage door canteen in London. (Photo Credit: Bettmann / Contributor)

So good he did it thrice

One of Crosby’s standout moments was performing the familiar favorite “White Christmas,” written by Irving Berlin in 1940. And it was a standout moment he performed no less than three times on the big screen.

Firstly during Holiday Inn (1942), then later for Blue Skies (1946), and finally for – what else? – White Christmas (1954). The tune had a special place in servicemen’s hearts, bringing to mind comforting memories of home. 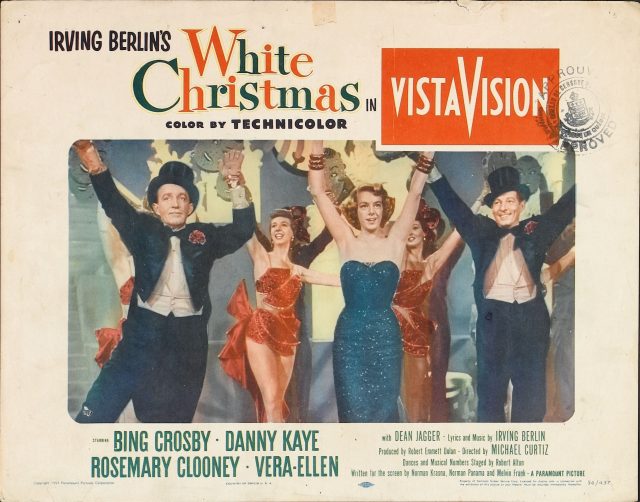 More from us: In White Christmas, The Stars Sang, Danced, Laughed, and Improvised their way to Making a Holiday Classic

Guinness World Records deem it the best-selling single of all time. Factinate notes that “it was played so often that Crosby was forced to re-record it in 1947, as the master recording was disintegrating from overuse.”