The Moon is a source of inspiration to many, from astronomers to star-crossed lovers. Part of its appeal is the fact we still don’t know a huge amount about it. People may have walked on the lunar surface, yet the Moon remains something of a mystery.

As news of an exciting discovery breaks, let’s delve into some major mysteries concerning our cosmic neighbor…

What is the “mystery hut” spotted in this crater?

The Yutu 2 rover from China is making its painstaking way across an area known as the Von KÃ¡rmÃ¡n crater. This is located in the southern hemisphere of the Moon’s far side and measures 115 miles wide. Yutu 2 has been trundling along since landing in January 2019, no doubt hoping to spot something.

And in November it did. Our Space, described by Space.com as a “science outreach channel” run by the CNSA (China National Space Administration), reported a cube on the lunar horizon. Yes, a cube. The channel dubbed it a “mystery hut,” implying that it might contain an ET caretaker.

Because it’s situated approx 260 ft away, experts can’t be certain about the cube. Yutu 2 needs to get closer. Bearing in mind the rate of travel, this probably won’t happen in a hurry. A day on the Moon is the equivalent to one month back home – we’ll explain why a little later. Investigators are going to spend the next two-three lunar days getting a look-see.

Space.com has an idea about what the Chinese are looking at. “A likely explanation for the shape would be a large boulder which has been excavated by an impact event,” they write. Social media users chimed in with their own theories, including that a Mickey D’s had finally made it all the way to the moon.

In the meantime, there are other Moon-based phenomena to get our heads around. Some of which require more than “one small step for Man” to solve…

The effects of a full moon

The Moon is traditionally linked to wild behavior, be it in people or animals. Why? The jury’s still out. Reader’s Digest goes back to the teachings of Aristotle (384 – 322 BC), who “thought the brain might be affected by the moon like tides are because the brain is ”˜moist.’” It makes the brain sound somewhat squishy. Today’s thinkers believe the great man’s hunch to be more on the spongy side. That said, it hasn’t been disproved! 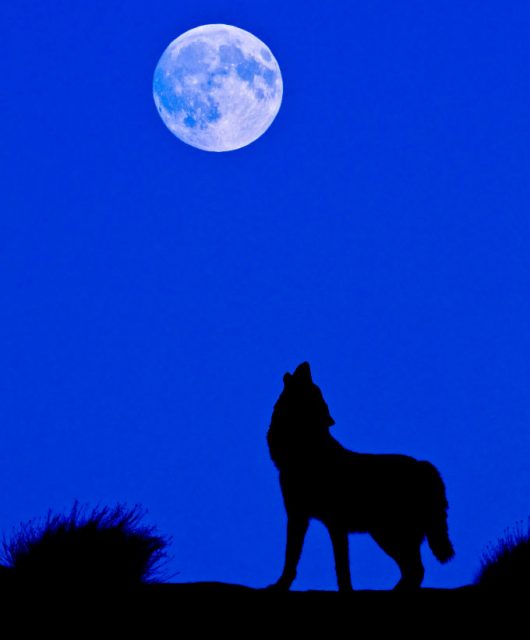 A long-standing idea sees wolves howling their lungs out at the sight of the Moon. This isn’t actually a thing, meaning all those werewolf stories go out the window. So where did it come from?

How Stuff Works notes that ancient societies from Neolithic times onwards “continually paired wolves with the moon in images and literature, which eventually evolved into today’s popular belief.”

This is great news for were-phobes. However, it’s a primal image with the power to convince… especially on a creepy walk in the dark with only moonlight to guide you.

What is the South Pole-Aitken Basin Anomaly? It kind of sounds like a prog rock band. Truth is, this area on the Moon is akin to something out of sci-fi.

As noted by Popular Science, it’s thought to be an epic metal projectile which struck the Moon’s South Pole. Lurking underground, it gave rise to what’s considered the biggest impact crater spotted in the solar system.

The Moon is keeping secrets from us

Say hi to the Man on the Moon. This is the much speculated-upon face of the lunar landscape. It’s also the only face of the Moon which we see from Earth.

How come? Because it’s tidally locked. In others words, while it orbits our world, it doesn’t spin fast enough to show more than one side. The Moon certainly moves – indeed, some believe it span like a ballerina during its rather dramatic creation – but those days are long gone.

Live Science mentions that, when the Moon is at its closest to us, stargazers can see an extra 8 degrees of lunar action. This is due to the Moon’s rotation not quite matching its orbit. 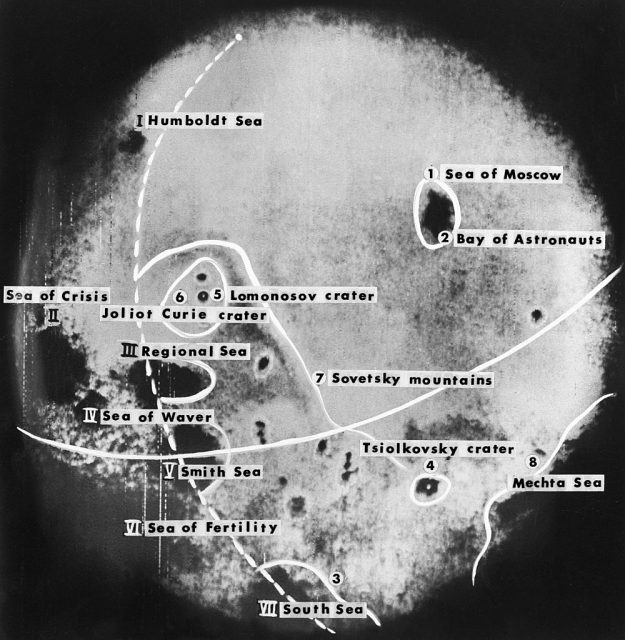 1959- This photo, released by the Soviet Union, reportedly gives mankind one of its first glimpses of the hidden side of the moon. The diagram shows the location of previously invisible lunar landscape features, and also some of those features which were previously seen from the Earth and had already been named. (Photo Credit: Bettmann / Contributor)

What’s on the far side of the Moon? Reader’s Digest notes the lack of “maria,” or seas of lava, plus many impact craters pattern the surface. We first saw the far side in 1959, thanks to the old Soviet Union’s Luna space program.

The far side is known to have a thicker crust. NASA’s SSERVI (Solar System Exploration Research Virtual Institute) website writes the uneven crust may have occurred thanks to “an ocean of molten rock” beneath the crust, where “tidal effects caused distortions that were later frozen in place”. This apparently explains the lack of lava traces on the far side, with the chunky layer proving tough to penetrate by volcanic forces.

It’s like a big pizza pie… but who cooked it?

The Moon is a true hot spot, it seems. Popular Science details the samples collected by Apollo 11 in 1969. Neil Armstrong, Buzz Aldrin and Michael Collins brought back rocks that appeared to show the Moon’s origins as a seething magma blob.

Where did the blob come from? Us! Something the size of Mars could have collided with Mother Earth at one point, with the ingredients for the Moon spilling out into orbit. “Further studies of the rock show the material that formed the moon also formed our own planet, adding more support to this idea,” Popular Science writes. 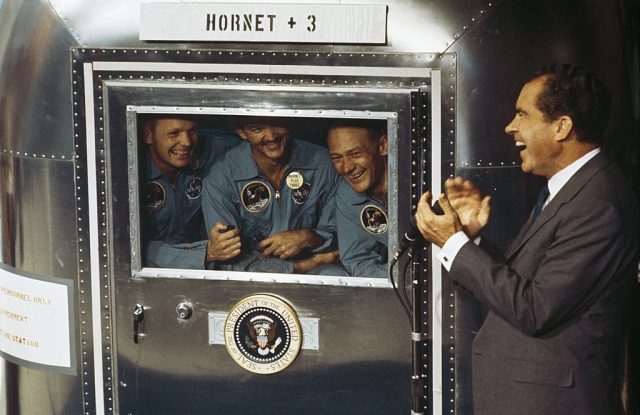 From left to right, Neil Armstrong, Michael Collins and Edwin ‘Buzz’ Aldrin Jnr, the crew of the historic Apollo 11 moon landing mission are subjected to a period of quarantine upon their return to earth. Through the window of their Mobile Quarantine Facility, they hold a conversation with President Richard Nixon (1913 – 1994). (Photo Credit: MPI/Getty Images)

The Moon’s volatile nature is reportedly added to by Earth’s gravity. As mentioned by Reader’s Digest, the lunar legend can affect tides here. And we return the favor as our influence manages to trigger seismic shocks on the Moon’s surface.

Some of these measured are “strong enough to destroy a human settlement.” The place may look quiet but turns out there’s a fair amount of action due to the pull exerted by our planet. 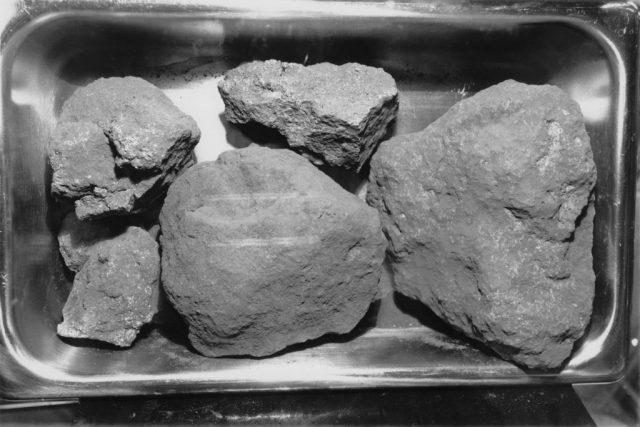 Who or what lived (or lives!) on the Moon?

Ultimately, we may be in the shadow of another form of life. With water discovered on the Moon in 2008, the prospect of Moon folk is getting closer. 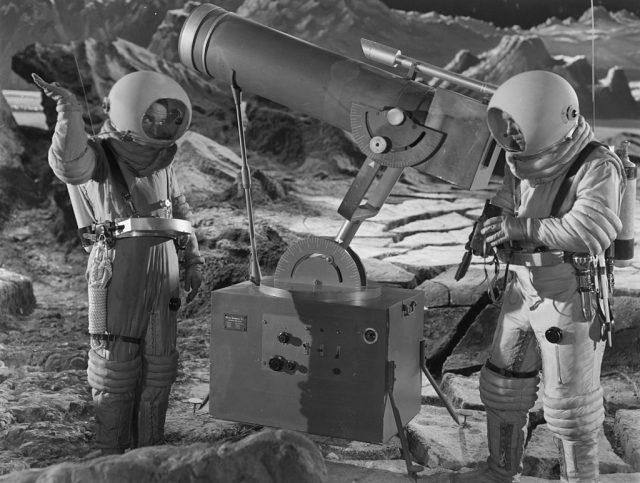 Two astronauts operate a powerful lunar telescope in a scene from the film ‘Destination Moon’, a surprisingly accurate prediction of space travel which won an Academy Award for Best Special Effects. The film was directed by Irving Pichel for George Pal Productions. (Photo Credit: Keystone/Getty Images)

More from us: 50th Anniversary of Apollo 11 ”“ A Look at the Best Conspiracies

Getting to the bottom of this is far from straightforward, as you might expect. Recalling studies made of moon rocks from Apollo 11, NASA highlights the possibility of cross-contamination. Should someone sneeze at the wrong time, it could be mistaken for a little green man.