What do you do on a Friday when the majority of your hamburger joint customers are Catholic and don’t eat meat?

For Cincinnati businessman Lou Groen, this very situation pushed him to invent the Filet-O-Fish that is such a staple of McDonald’s today.

But it wasn’t smooth sailing to begin with, and the sandwich’s existence was due to a bet with the CEO of McDonald’s at the time.

According to Business Insider, Lou Groen saw a McDonald’s ad in a magazine in 1959 and decided to become part of the franchise. Business was struggling in general, but Groen wasn’t one to give up easily. A former business partner said of Groen: “He loves to do battle. He loves a challenge.” 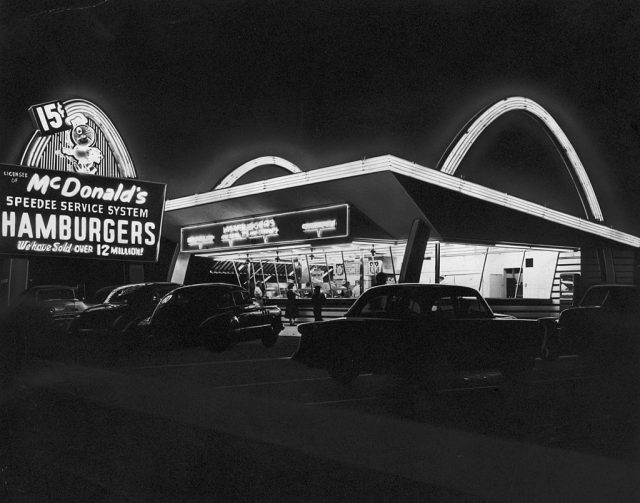 There was one particular problem that ate at Lou Groen. Located in a neighborhood that was 87% Catholic, his business saw earnings drop to just $75 on a Friday because Catholics abstain from meat on Fridays and during Lent.

However, Groen noticed that Frisch’s Big Boy restaurant was doing okay and he looked into why that was. Discovering that they sold a fish sandwich on Friday, Groen was determined to find something similar to offer at his own restaurant.

After various experiments to make it as cost-effective as possible, Groen came up with a piece of battered halibut with a slice of cheese in a bun.

Now he had something to take to the big boss of McDonald’s.

No stinking up my restaurants

The CEO in 1961 was Ray Kroc. According to Paul Groen (Lou’s son), his father “made a number of trips to Chicago to present the idea to Ray Kroc.” McDonald’s had only been a franchise for about six years, so it was relatively easy for restaurant owners to get a meeting with the highest levels of management. 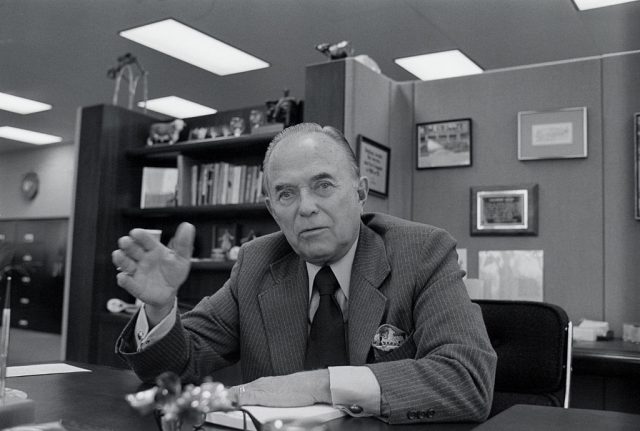 Ray Kroc, Chairman of the Board of the McDonald’s Corporation, gestures as he sits at his desk at his company. Chicago, Illinois. (Photo Credit: Bettmann / Contributor)

However, Kroc was unimpressed with Groen’s creation. When Lou spoke about his life in business to the Business Courier in 2006, he related how Kroc told him, “I don’t want my stores stunk up with the smell of fish.”

Kroc’s reaction might also have had something to do with the fact that he had his own idea for a meatless burger called the Hula Burger. It was a grilled pineapple ring with some cheese in a bun.

According to the Business Courier, when Groen and Kroc met, “they immediately hit it off.” That might account for why Kroc came up with an unusual bet for Groen.

As reported in the Smithsonian Magazine, the terms of the bet were as follows: “On Good Friday in 1962, both the Hula Burger and the Filet-O-Fish sandwiches would appear on the menu in selected locations ”“ whichever sandwich sold the most would win. The final score? Hula Burger: 6, Filet-O-Fish: 350.”

Who remembers the Hula Burger from McDonald's? pic.twitter.com/kjCLI3HzhF

The McDonald’s website adds a little extra to this story by claiming that “Kroc was so convinced his Hula Burger would outsell the Filet-O-Fish that he made a side bet with his first grillman Fred Turner that the loser would buy the winner a new suit.”

When the results were finally in, “Fred got a new suit and McDonald’s got the Filet-O-Fish.”

McDonald’s agreed to make the Filet-O-Fish part of their standard menu in 1965. But it was decided that cod would be better for the sandwich due to issues like the thickness of the filet and cooking time. Worried that people might think of “cod liver oil” when they read the description, the fish was described as “North Atlantic whitefish.” 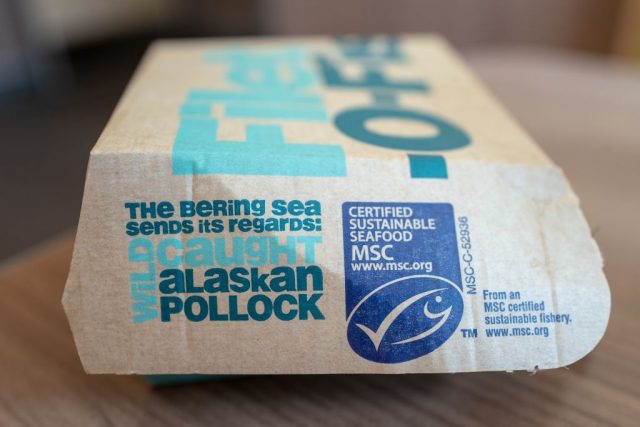 Today, McDonald’s is keen to ensure its fish is sustainably sourced and uses only wild-caught Alaska Pollock that has been certified by the Marine Stewardship Council.

“Watch the Pope change the rules”

In his book, Grinding It Out: The Making of McDonald’s, Kroc describes how he initially rebuffed the idea with the declaration: “I don’t care if the Pope himself comes to Cincinnati. He can eat hamburgers like everybody else.”

Then, when the Filet-O-Fish proved a hit, Kroc allegedly told Catholic members of his team: “You fellows just watch. Now that we’ve invested in all this equipment to handle fish, the Pope will change the rules.” 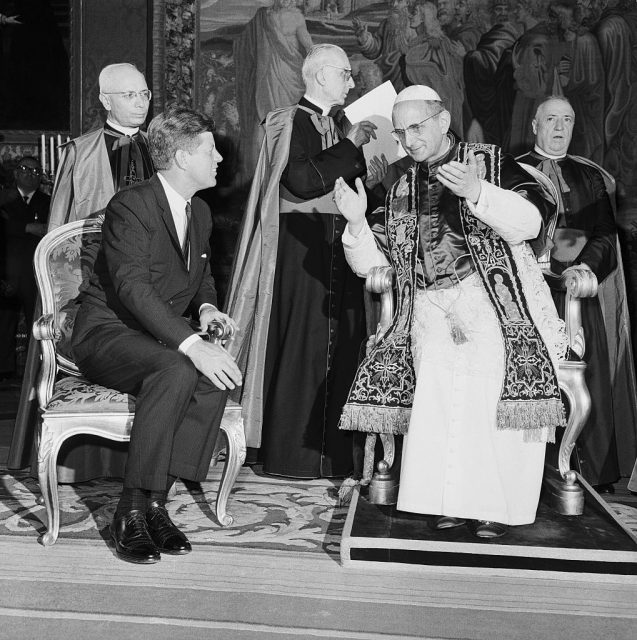 President Kennedy and Pope Paul VI sit and enjoy some conversation during their Meeting. The pontiff praised Kennedy for his “untiring” efforts to obtain peace in the world. (Photo Credit:
Bettmann / Contributor)

He was partly right. In 1966, the law about no meat on Fridays was relaxed, with the Catholic church expressing a “hope” and “expectation” that all Catholics would continue to abstain through personal choice.

Despite this change in religious law, the Filet-O-Fish remained immensely popular. The McDonald’s website states that of all the Filet-O-Fish sales made in one year, 25% of them were made during Lent.

By 1976, the Filet-O-Fish even had mascot, Phil A. O'Fish pic.twitter.com/ATqHWHdul7

More from us: Vintage McDonald’s Photos That Will Give You Nostalgia

In fact, the Filet-O-Fish was so popular that in 2013, to celebrate 50 years since the sandwich made it into restaurants, McDonald’s launched Fish McBites in Philadelphia. These little bite-sized snacks were made from the same responsibly-sourced pollock as the Filet-O-Fish. They premiered in time for Lent 2013 but, unfortunately, didn’t prove as popular as their predecessor since they were discontinued the same year. Despite that, there are various petitions on the internet calling for their reinstatement, so perhaps they’ll rejoin the famous Filet-O-Fish one day.

« Famous Late Night Feuds And A Couple We’d Never Heard About
The Irish Crown Jewels Have Been Missing for Over a Century – What Happened to Them? »