This French King Thought He Was Made Of Glass, And He Wasn’t The Only One

King Charles VI of France had an impressive start to his rule as king. He spearheaded reforms and rooted out corruption among his advisers. Charismatic and just, his people referred to him as “Charles the Beloved.”

But before the end of his life, he would become known as “Charles the Mad” after suffering several psychotic episodes.

At one point, he was convinced that he was made of glass ”“ and as surprising as that might be, what is more surprising is that he wasn’t the only person to suffer from such a delusion.

From beloved to mad

Charles’ first psychotic episode happened in 1392 after an assassination attempt was made on his friend and adviser, Oliver de Clisson. The perpetrator took refuge in Brittany, and a furious Charles gathered an army to retrieve him. 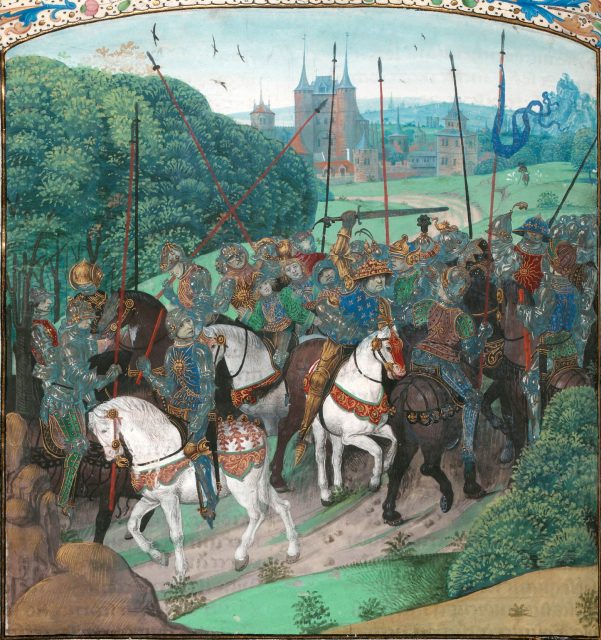 Reports from the time indicated that Charles was in a fevered state, speaking with disconnected speech. The army progressed slowly and he got more and more incensed at the delay. When a page accidentally dropped a lance so that it clanged loudly against a piece of armor, Charles was jolted into a frenzy. He took out his sword and began attacking his own companions, killing several of them, until he was brought off his horse and subdued.

A king made of glass

Over his life, Charles would suffer many episodes of confusion and delusion. At one point, he completely forgot who he was and that he was king. Another time, he thought he was entirely made of glass and might shatter at the slightest touch. He would wrap himself in blankets and sit very still to keep his fragile body safe. 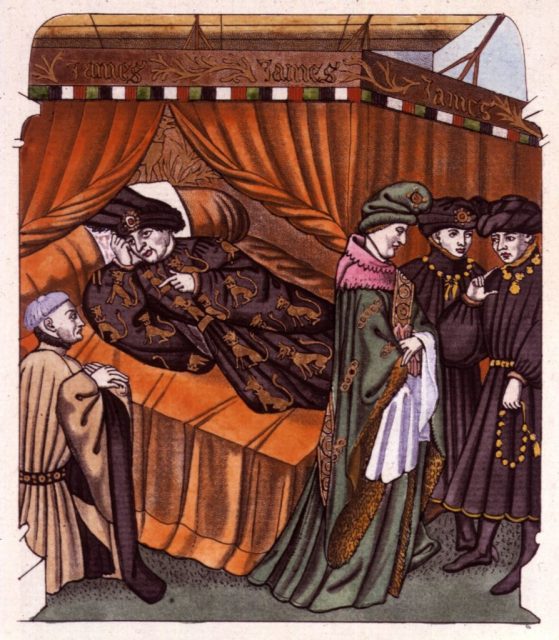 Circa 1400, Charles VI, King of France, is attended in his bedchamber by servants and ministers. (Photo Credit: Hulton Archive/Getty Images)

The man who would go on to become Pope Pius II wrote the following about Charles:

“Sometimes he thought he was made of glass and would not let himself be touched. He had iron rods put into his clothing and protected himself in all sorts of ways so that he might not fall and break.”

Although Charles VI is the most famous case of glass delusion, he was not the first to suffer from it, nor would he be the last.

The condition was considered a form of melancholy that afflicted nobles and scholars. In The Anatomy of Melancholy in 1621, Robert Burton noted glass delusion as one of the signs of melancholy:

“that they are all glass, and therefore will suffer no man to come near them; that they are all cork, as light as feathers; others as heavy as lead; some are afraid their heads will fall off their shoulders.”

The phenomenon was common enough that in 1613, the Spanish writer Miguel de Cervantes wrote a short novel entitled The Glass Graduate. In the story, the protagonist is an aspiring lawyer who is accidentally poisoned by an aphrodisiac potion and becomes convinced he is made of glass.

While cases of glass delusion started occurring in the fifteenth century, it is interesting to note that the delusion goes back further than that, albeit associated with a different material. 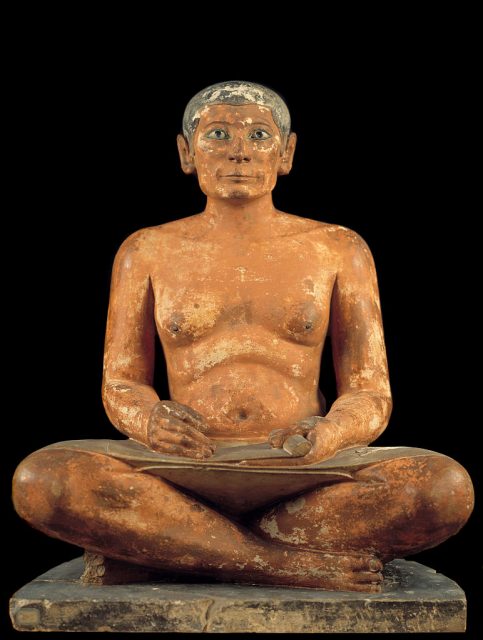 As far back as the second century AD, there are records of people believing they are made of pottery. Such sufferers were referred to as “earthenware men.” While there are obvious biblical inferences here, connected to the idea of men being formed from the dust and clay of the Earth, there’s also the idea of the body’s fragility.

How to cure glass buttocks

While Charles believed he was entirely made of glass, it was not unusual for some people to believe that a particular limb was made of glass. In his 1607 book entitled The Optick Glasse of Humors, Thomas Walkington described a man who had a fear of sitting down because he believed his shoulders and backside were made of glass.

A similar incident was recorded around the same time in Paris. According to the History website, the cure was as follows: “the physician proceeded to beat the man’s rear end severely. Thus, he demonstrated to the patient that his stinging buttocks were proof they were not made of glass but from sensitive flesh.”

The woman with a glass piano inside her

Another famous case of glass delusion is that of Princess Alexandra of Bavaria. Being born the eighth child of King Ludwig I of Bavaria in 1826, it was unlikely that Alexandra would ever ascend to the throne.

Instead, she devoted her life to literary endeavors, publishing several books and publications. The proceeds from her 1856 book entitled Feldblumen (Field flower) were donated to an orphanage. 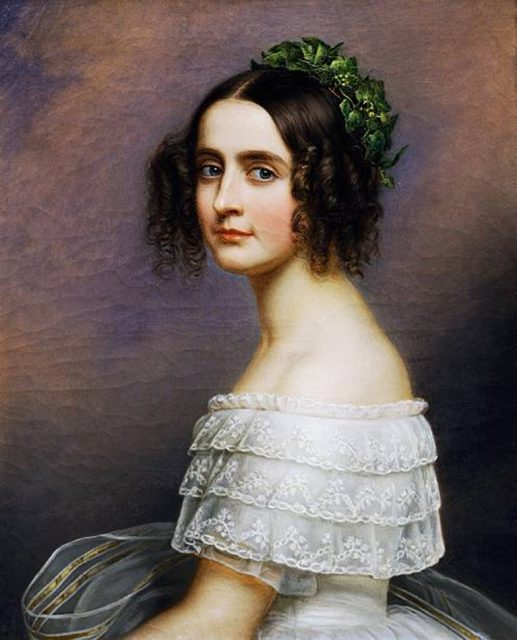 However, during her life, Alexandra exhibited various psychological issues. She had a fixation with being clean and, to that end, would only wear white clothes. Perhaps most peculiar of all was a delusion she had in her twenties that she’d swallowed a grand piano made of glass when she was a child. She started walking with extreme care and turning her body carefully, convinced that any impact would shatter the glass instrument inside her.

The magical properties of glass

In the 15th century, a Venetian glass maker called Angelo Barovier created the first clear, colorless glass. While glass was a known substance in those days, this new type was seen as so wondrous as to be magical.

What with the earthenware men that preceded them and the concrete men who appeared in the 19th century (when people believed their bodies were made of concrete), this has led historians and psychiatrists to postulate that some delusions are linked to the new technology and substances of the age.

There were still cases in the 1930s

In 2015, the BBC reported on Andy Lemeijn, a psychiatrist from the Netherlands who had a patient with a genuine case of glass delusion.

Lemeijn had already been looking into the history of this peculiar affliction. Rather than dying out around the 17th century as previously suspected, he found a lecture from 1883 that spoke of how one female patient in an Edinburgh mental hospital thought her legs were made of glass. 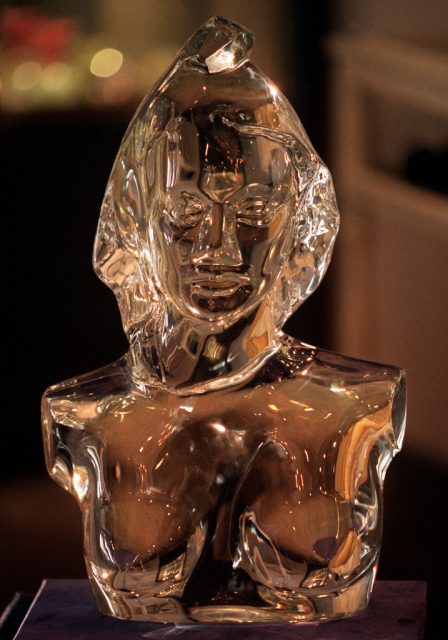 Lemeijn’s writings and lectures on the subject encouraged a Dutch psychiatrist to approach him with information he’d found in the archives about a patient suffering from glass delusion in the 1930s.

As the BBC reports: “The woman had been admitted to a psychiatric hospital believing that her legs and back were made of glass. Such was her fear of personal contact, the notes showed, that the nurses couldn’t get near her to change her clothes or help her. She had apparently recovered after treatment.”

When a young man came to the University Clinic in Leiden, Lemeijn seized the opportunity to speak with him.

The patient explained how you could look through a window and see the outside world but not necessarily see the glass in the window; that was how he felt. He had feelings of “being there” and “not being there.” 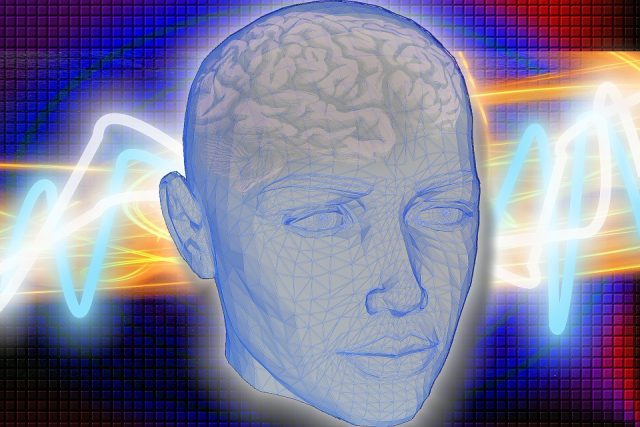 Lemeijn learned that the man had recently been in an accident, and he theorized that the glass delusion was a subconscious way in which he could keep his overprotective family at bay and maintain some privacy and personal space.

As the BBC goes on to say: “Psychoanalyst Adam Phillips argues that the glass delusion has powerful contemporary resonance in a society in which anxieties about fragility, transparency and personal space are pertinent to many people’s experience of, and anxieties about, living in the modern world.”

More from us: Did This Sporting Mishap Have a Right Royal Effect on King Henry VIII?

Various websites suggest that a modern-day version of glass delusion is the fear that modern technology is somehow reading our minds, suggesting that there may be more glass men around us than we think.

« Did Emma Watson Really Almost Walk Away From ‘Harry Potter’?
Winnie-the-Pooh, Bambi to be Added to the Public Domain »