Researchers Hoping To Get Answers About Sicily’s Mysterious Child Mummies

Researchers are preparing to take a close look at the remains of 160 children interred in Sicily’s Capuchin Catacombs of Palermo. Scientists are hoping to discover new information surrounding the short lives and premature deaths of these children using X-ray technology. 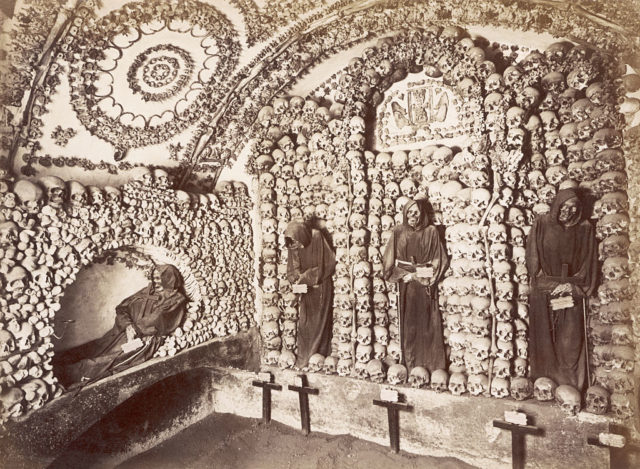 Previous research done on the mummies of the Catacombs has primarily focused on the adults while the children have been mainly overlooked. The goal of this research project is to gain an insight into the health, development and identities of the children of the Catacombs of Palermo. The proposed study will focus on children given the mummification rite in late modern Palermo, dating from 1787 to 1880 A.D. The Catacombs themselves were active from the late 1590s to 1880, although two additional bodies there were buried in the early twentieth century.

None of the children’s identity, cause of death or medical history is known. Any sort of descriptive tags that were once attached to them have since eroded away. To figure out who these children were, researchers will bring a portable X-ray machine into the Catacombs. According to Kirsty Squires, an associate professor of bioarcheology at Staffordshire University, “we are using a portable X-ray machine to take radiographs so that we can estimate the age of individuals based on their dental eruption and development, and fusion of the bones.”

The findings from these X-rays will be compared with each child’s clothing, funerary artifacts, mummification type, and any surviving historical documentation. Together, this information should hopefully provide an insight into the identities, health and lifestyle of the children who were mummified.

The Capuchin Catacombs were first built in the late 1590s and were used as a private burial site for friars until 1787 when the Capuchin order began allowing lay people in the region to use the Catacombs as their final resting place. However, the mummification rite was reserved for the wealthier classes of society. As Squires points out, “We know that they would have come from middle class families- the mummification rite was reserved for wealthier individuals like nobility, the middle class and clergy. So we know that they weren’t the poorest members of society, but that’s all we know really.” 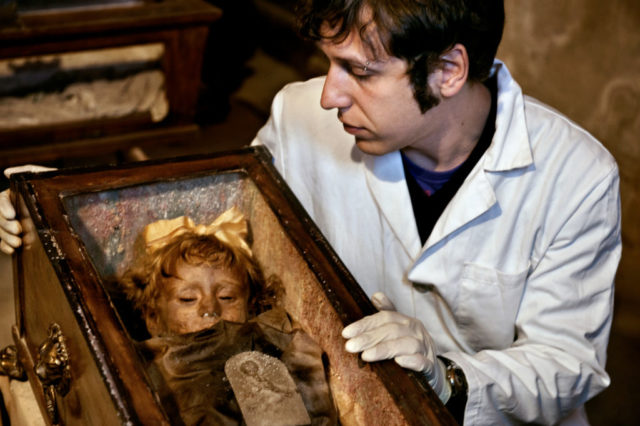 Paleopathologist, Mummiologist Dario Piombino Mascali poses in front of the mummified body of Rosalia Lombardo who died at the age of just two years of pneumonia in 1920 (Photo Credit: Fabrizio Villa – Getty Images)

One of the children in the Capuchin Catacombs of Palermo was Rosalia Lombardo, who died of pneumonia a week before her second birthday on December 6, 1920. Lombardo was chemically embalmed, and as a result, she still looks incredibly lifelike. Her body was investigated ten years ago by Dr. Dario Piombino-Mascali, who is working with Kirsty Squires on her research surrounding the child mummies in the Catacombs.

As Piombino-Mascali reminds us, “some of them are superbly preserved. Some really look like sleeping children. They are darkened by the time but some of them have got even fake eyes so they seem to be looking at you. They look like tiny little dolls. Of course, you want to do something to preserve them and to make sure their stories are told and give a sense that they are children. It is very upsetting when you deal with children in anthropology.”

More from us: Archeologists Unearth Ancient Urn Burials for Children in Northern China

This new study is starting in January 2022 and is funded by the UK’s Arts and Humanities Research Council. It will be months before any findings are published.