Some Historical Figures Predate Photography, But Thankfully These Ones Don’t

Photos of iconic figures are available with a couple of clicks. The existence of cameraphones and the like means that, if someone notable is around, chances are they’ll get snapped.

It was different back in history, of course, with painted portraits and sculptures revealing those who existed before the modern camera was invented.

When photography came about, it changed how we saw well-known people forever. Here are some who were caught on camera during these exciting decades.

Frederick Douglass told the world about the horrors of slavery, based on first-hand experience. Hailing from Maryland, he escaped his fate to push for abolition, traveling across the Atlantic to spread the word. He supported a range of causes, including women’s rights.

He passed away from a heart attack at the age of 77. Douglass “remained an active speaker, writer and activist until his death,” writes History. 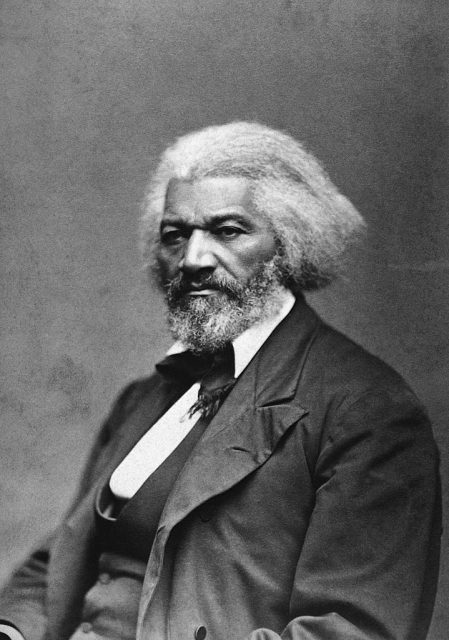 Born in Poland in 1867 as Maria Salomea SkÅ‚odowska, Marie and her husband Pierre Curie blazed a trail through the fields of psychics and chemistry. Their efforts in establishing the idea of radioactivity earned them the Nobel Prize for Physics in 1903, alongside fellow physicist Henri Becquerel.

Marie won her own Nobel Prize in 1911 for chemistry. Tragically, she died due to a disease of the blood, contracted after exposure to radiation. 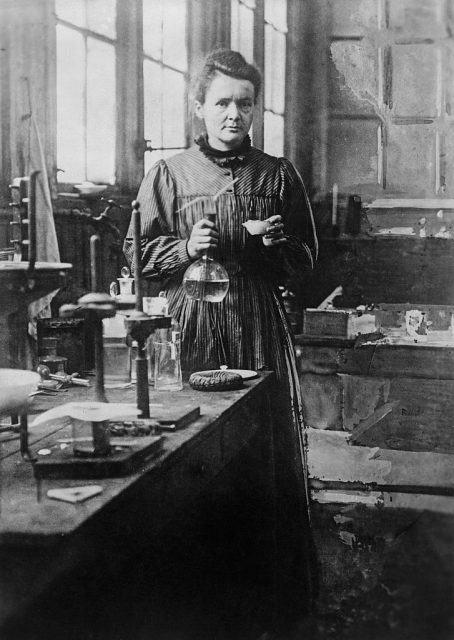 Born in Maryland in the early 19th century, and the subject of an Oscar-nominated movie, Tubman ran unimaginable risks by fleeing her enslavement.

“I grew up like a neglected weed,” she told Benjamin Drew in 1855, “ignorant of liberty, having no experience of it.”

She became associated with the Underground Railroad, a secret network that enabled others to do the same. In 1913 she passed away and received military honors at Fort Hill Cemetery, New York. 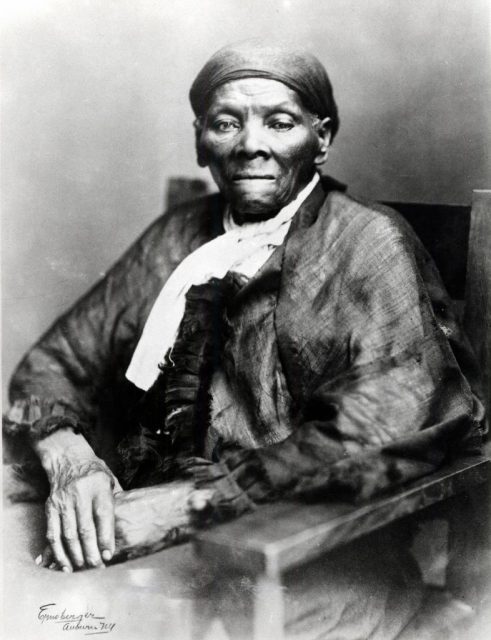 While a 1970s disco classic immortalized Grigori Rasputin, his life and legacy were far from the realm of good times. A fixture at the court of Czar Nicholas II, he achieved a mystical status as a spiritual advisor.

Born in 1869, this Russian convinced people he had powers beyond their wildest imaginations. It all came crashing down in 1916, when he was shot as part of a conspiracy to remove him from his influential position. 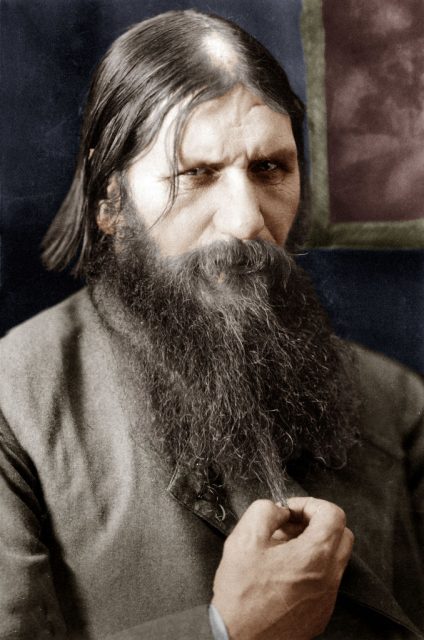 Rasputin (1871-1916), Russian adventurer healer of czarevitch , protege of the czarina, he was murdered by Prince Ioussoupov. This is a 1908 colorized document (Photo Credit: Apic/Getty Images)

Born in Utah, Robert Leroy Parker – or “Butch” Cassidy, through his role as a butcher – passed into Wild West history. He was in charge of the legendary gang of thieves called the Wild Bunch. Cassidy shared that responsibility with The Sundance Kid.

Raindrops probably fell on his head, however when he reportedly died it was in Bolivia, via a hail of bullets. His death there in 1908 was never confirmed. 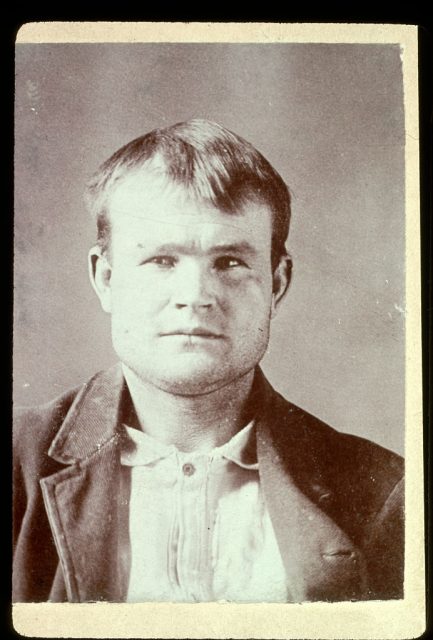 Portrait of Butch Cassidy, one of the most famous and friendliest western outlaws, taken in prison in 1894. (Photo Credit: Jonathan Blair/Corbis via Getty Images)

The movie starring Doris Day is a firm favorite. But of course the real Calamity Jane – Martha Jane Canary – was somewhat different from her Hollywood counterpart. Entering this world in the 1850s, she went on to become part of the fabric of the Old West.

Not that she was a stranger to fictionalized exploits. It’s thought her 1896 autobiography strayed a bit from what actually happened. Canary died in 1903 from a combination of pneumonia and inflammation of the bowels. 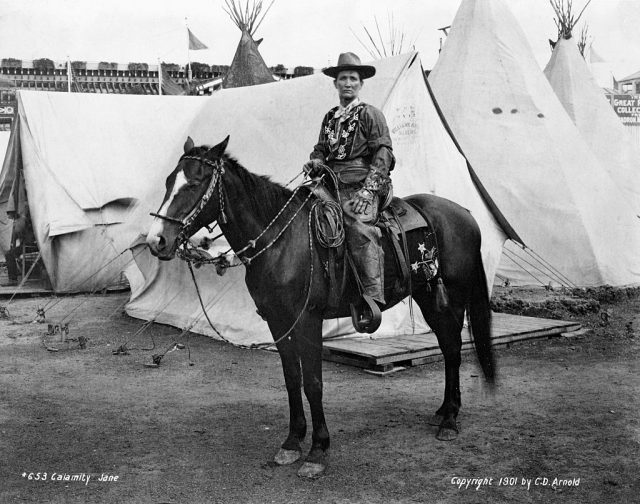 He may have had the nickname “The Little Magician,” yet Van Buren’s box of tricks didn’t help him during his time in office as 8th President of the United States. Starting off as Vice President in the 1830s, he reached the White House and ran the show during a period of instability.

He said: “As to the presidency, the two happiest days of my life were those of my entrance upon the office and my surrender of it.”

Born Maarten Van Buren in New York (1782), he worked as a lawyer and statesman. In the late 1840s, he tried for the Oval Office again, unsuccessfully. This time he represented the coalition Free Soil Party. He also helped found the Democrats. Van Buren died in 1862 aged 79 as a result of bronchial asthma and heart failure. 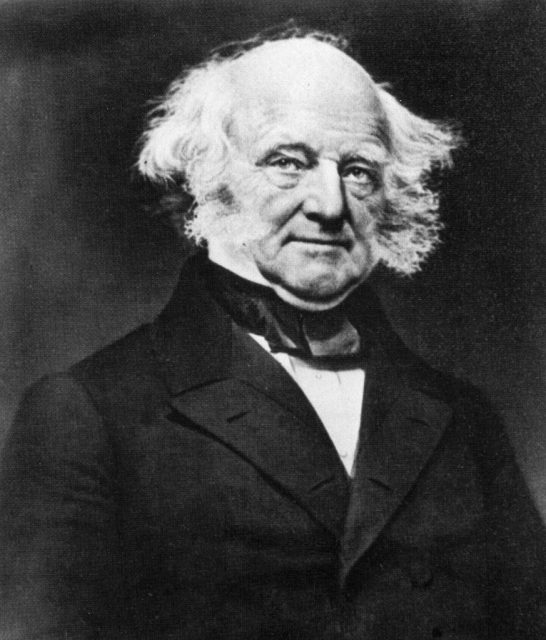 The author of the game-changing novel Uncle Tom’s Cabin (1852), Stowe was born in 1811 in Connecticut.

Her powerful story of African American slaves hasn’t aged brilliantly – namely, its stereotypical portrayals of Black people – but is still regarded as an important work. Stowe passed away in the late 19th century, aged 85. 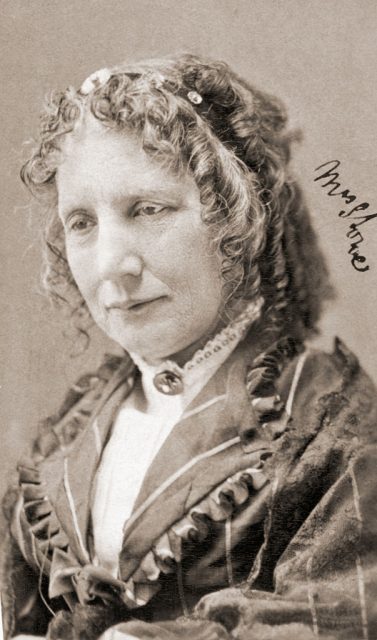 He was the American cavalry commander who went down in history for the wrong reasons, after his catastrophic defeat and death at the Battle of the Little Bighorn in 1876. Over 200 men died on Custer’s watch during the Great Sioux War of that year.

Born in Ohio in 1839, his tactical errors are held up as a classic example of military mismanagement. At one point he confessed that while he “must wish for peace” he added: “if I answer for myself alone, I must say that I shall regret to see the war end.” Custer’s war finished prematurely after he was shot twice. 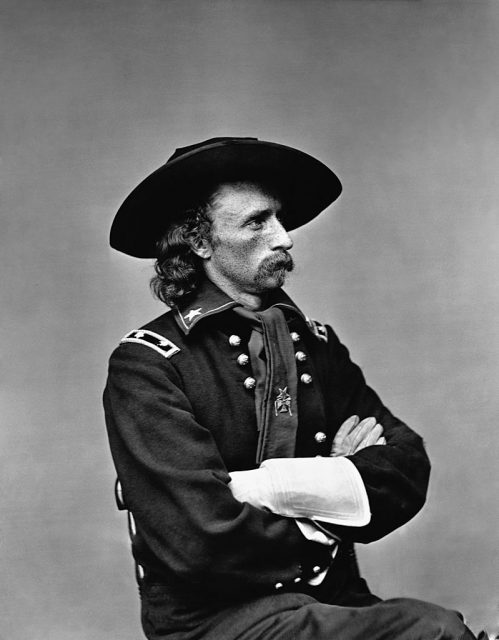 The legendary leader of the Apache may have ended his days as a prisoner. But his resistance to hostile forces trying to take Native American land made him a true hero in the eyes of many.

Starting out in what is now New Mexico in 1829, Geronimo got his famous name through conflict. His actual name was Goyahkla, “the one who yawns.” In 1909 he contracted pneumonia following a riding accident and passed away the same year. 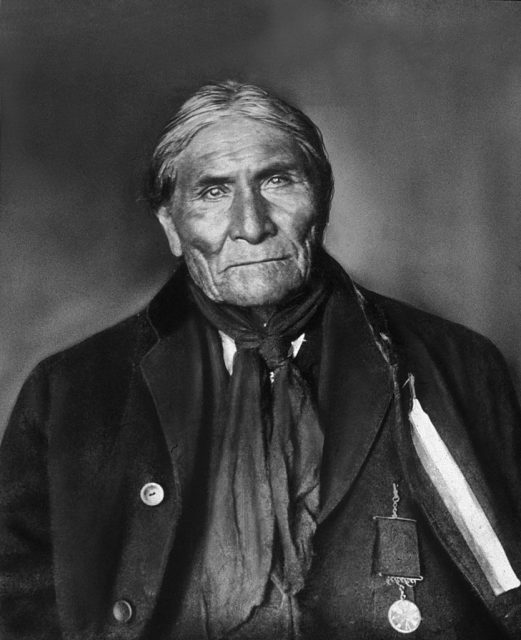 “I was born where there were no enclosures,” he said. Though sadly that didn’t continue for the last decades of his life.

Phoebe Ann Mosey, better known as Annie Oakley, was a female sharpshooter who became a sensation while working in Buffalo Bill’s Wild West Show. She was so talented that she earned more than anyone in the show except Buffalo Bill himself. 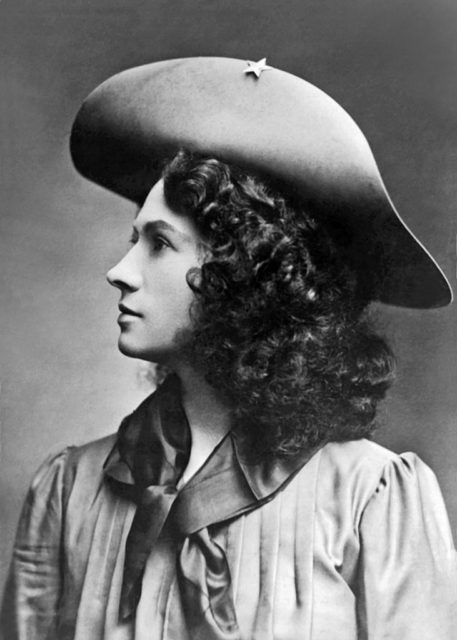 She also taught other women how to shoot, being a strong believer in female self-defense. This portrait of Oakley was taken circa 1890. Annie Oakley died in Greenville, Ohio, on November 3, 1926. She was 66 years old.

Arguably the most famous crime couple in the world, Bonnie and Clyde, traveled throughout the United States during the Great Depression. Along with their gang, they committed various different armed assaults. Although they are most famous for their bank robberies, they actually preferred to rob funeral homes and stores. 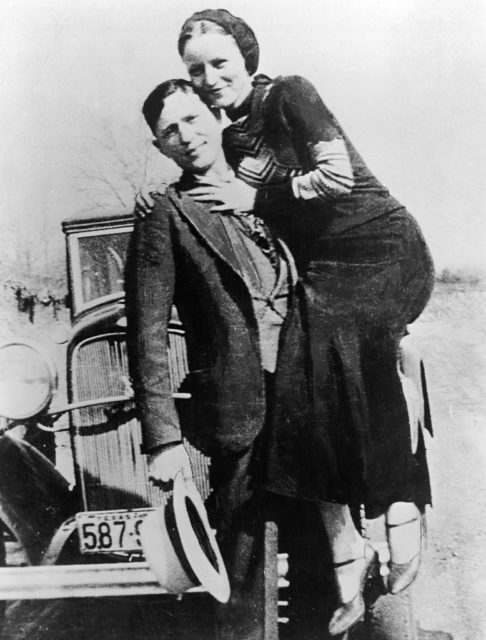 They were an interesting pair, a waitress and a poet who wanted to live a more exciting life. They certainly got that, ending up on the run from the predecessor to the FBI, the Bureau of Investigation. Their efforts to evade the authorities were initially successful, but they eventually culminated in an ambush and shootout in Louisiana on May 23, 1934. The couple tried to defend themselves, but they were quickly shot by the officers, dying instantly.

This photo of John Quincy Adams, sixth president of the United States, is one of the earliest known photographs of a president. The daguerreotype was taken in March 1843 by Philip Haas. He produced three versions but there is only one still in existence. 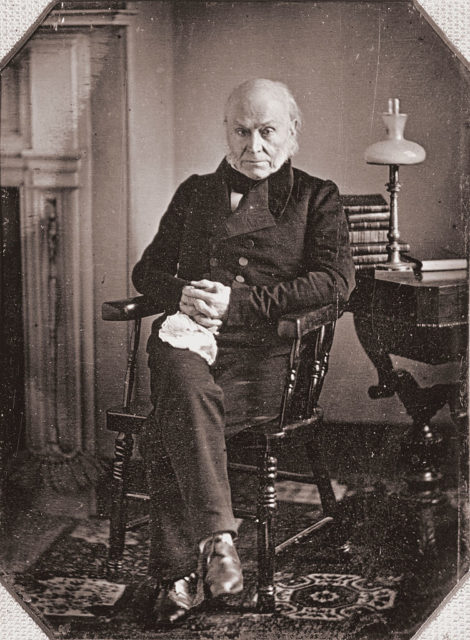 Adams, however, wasn’t a fan of the art form. Allegedly he said that the photograph was ugly and it looked far too similar to him. It wasn’t taken while he was in office, but rather 15 years afterward while he was working in Congress. Aside from this work, Adams was also a member of many different political parties throughout his career, and also served as a diplomat.

Charles Darwin, the English naturalist, biologist, and geologist, was one of the first to suggest that all species come from a common ancestor. At the time, his theories were widely rejected by fellow scientists and religious institutions, but today, his theory of evolution as the result of natural selection is considered to be one of the foundations of modern science. 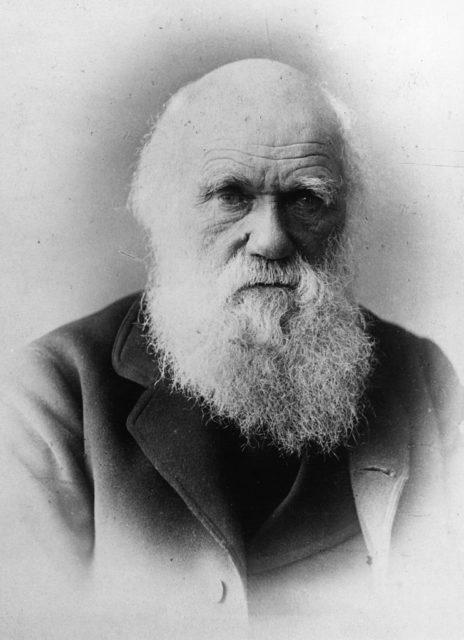 More from us: 13 Behind-The-Scenes Photos Of Old Hollywood’s Biggest Stars

Darwin published his findings on evolution in his 1859 book On the Origin of Species. For his contributions to science, he received an honorary burial in Westminster Abbey.