As you can imagine, this big-screen trick took a lot to pull off. See how they did it with sound and furry…

It was inspired by Anne Rice

Strange as it may seem, we wouldn’t have had Groundhog Day the movie without the author of Interview with the Vampire! Writer Danny Rubin’s mind raced after reading The Vampire LeStat in 1990. The idea of living an immortal existence stuck in his mind.

When Rubin’s agent later asked for a screenplay, he took this nugget and placed it alongside another thought he had about someone forced to endlessly repeat the same day. The adventures of Phil Connors were born. 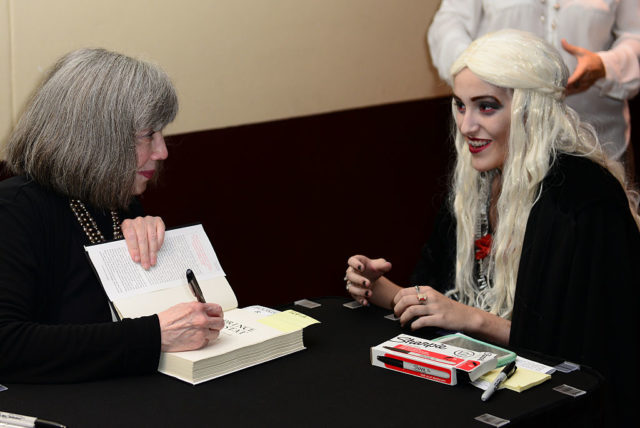 The curse of Phil Connors

Why was Murray trapped within the same 24-hour bracket? The movie didn’t answer that. Though it could have.

At one point the time loop was triggered by a curse inflicted by Phil’s ex-girlfriend! How would this have worked? They never went the whole hog to find out. 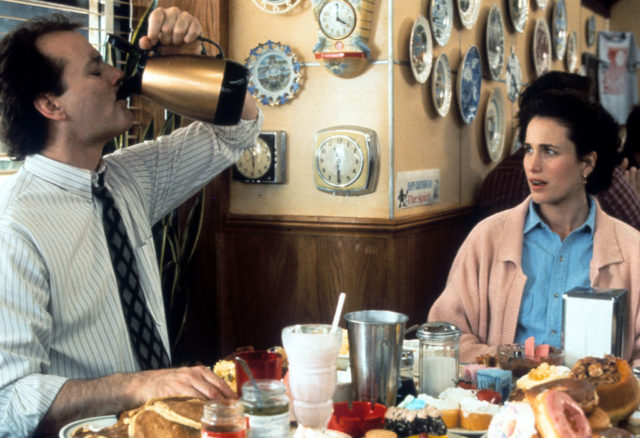 The concept of Groundhog Day was meticulously worked out by Rubin over eight weeks. Curses aside, he pondered on what exactly was going on with Phil, before ultimately opting to leave things hanging.

One relatively simple part was the title holiday. How did Rubin select Groundhog Day? He reportedly plucked the date from his calendar at random.

Michael Keaton didn’t get the idea

If the idea gets you scratching your head, then you’re in good company. Before Bill Murray joined the ride, Michael Keaton was approached as lead male.

Speaking to Entertainment Weekly, Keaton reflected that it “sounds like the kind of wry, sardonic, glib young man I’ve played” but added he “can’t do it better than Bill Murray did it.”

Keaton teamed up with Ramis and MacDowell for clone comedy Multiplicity three years later. Unlike Groundhog Day, that production flopped at the box office. 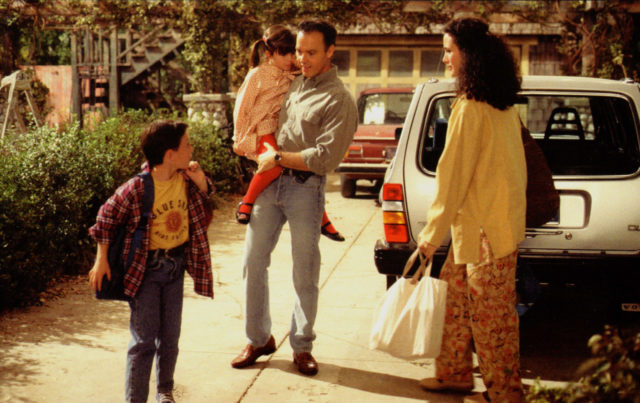 The simplest ways are the best

Murray decides to test the boundaries of his loopy predicament by breaking a pencil. The next (Groundhog) day it’s back in one piece.

Originally, he would go just a teensy bit further. The bewildered weatherman “gave himself a mohawk, repainted his room, and had fun with a chainsaw”, as described by Mental Floss. This elaborate sequence was shot but then ditched for the no-nonsense version.

The original ending was dark

Being stuck in Groundhog Day really gives a guy time to think. How long was Phil Connors going round in a cosmic circle? The jury’s out, but thousands of years have been mentioned as one potential period. In reality, we’re apparently talking decades rather than centuries.

This dark take may have taken an immense toll on Phil. Would he ever have gotten out? There was also an idea that MacDowell’s Rita would also become trapped in the loop, suffering the same fate. 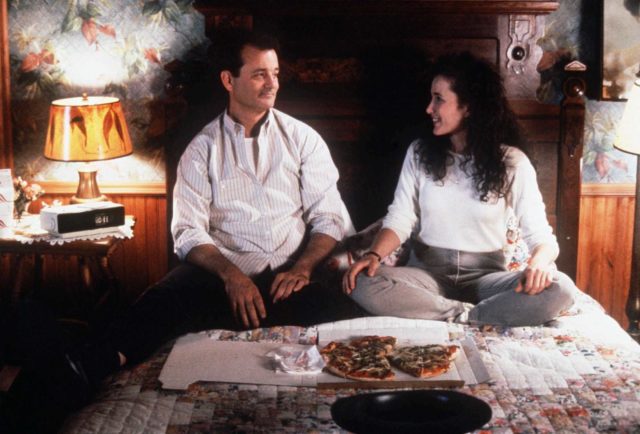 The groundhog may be the holiday’s cute mascot, but Murray wasn’t so keen. He needed a rabies shot after the little fella sunk its teeth into him not just once, but twice.

Reportedly, it got jumpy in the famous “Kidnapping Phil” sequence. Murray struggled to keep the creature on his lap whilst inside a vehicle. It let him know how it was feeling with a mighty chomp on the hand. 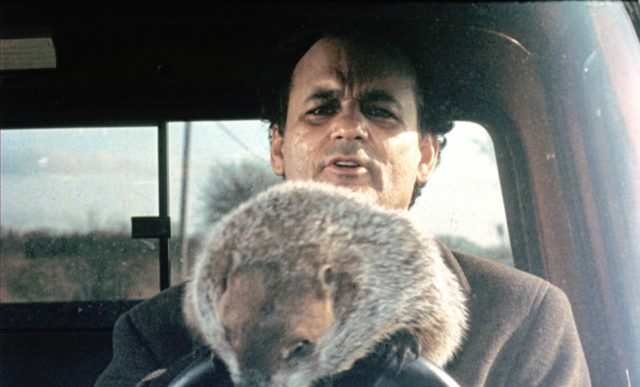 Murray and Ramis had a long working relationship, from Stripes (1981) to Ghostbusters (1984). Tensions boiled over during the making of Groundhog Day, with the pair clashing over how to handle the material.

Reader’s Digest mentions that Murray figured it “should be more of a thinker piece; the type of movie that makes you question life and our very existence.” Ramis wanted to stay focused on the comedy. Murray’s divorce also caused friction on set and there are reports things got physical between the friends. 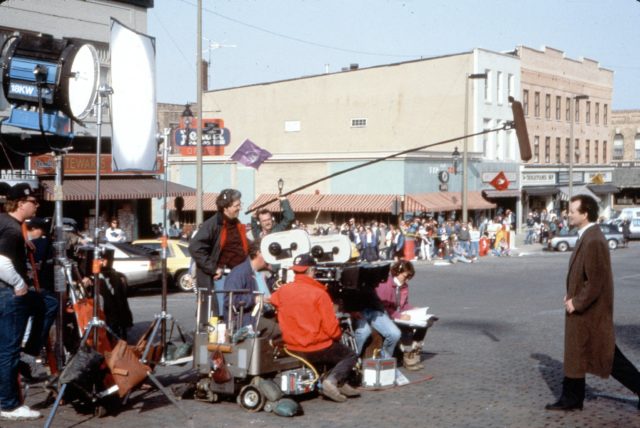 Eventually, they stopped speaking. It wasn’t until 2014 that Murray reconciled with Ramis. The latter was dying from complications of autoimmune inflammatory vasculitis. Talking to the New Yorker, Ramis said: “Bill would give you his kidney if you needed it, but he wouldn’t necessarily return your phone calls.”

Arguably the most memorable character in Groundhog Day was the ultra-aggravating Ned Ryerson (Stephen Tobolowsky). During one stage of the loop, Phil lays him out cold on the street corner.

The sequence was filmed on Cass Street, in Woodstock, Illinois. A plaque was set into the pavement to celebrate the movie. Inside the outline of a shoe is the legend: “Bill Murray stepped here.” 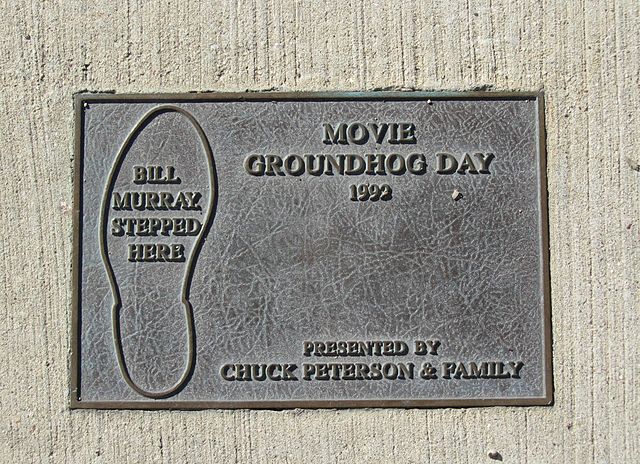 The film was turned into a 2016 musical, created by Rubin, Tim Minchin and Matthew Warchus. However, others were interested in staging Groundhog Day.

Notably, the late great Stephen Sondheim saw its potential as a show. Sondheim meets Groundhog? What a treat that could have been! 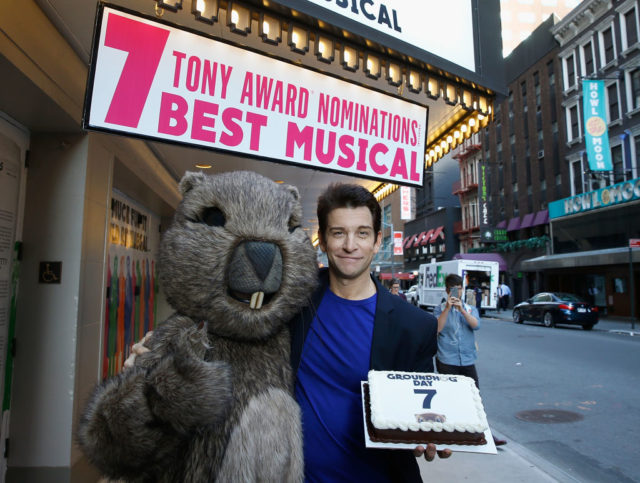 A sequel is as far away as a groundhog dropping caught in a hurricane. That said, Murray reprised his role for a Jeep Superbowl ad in 2020.

The pandemic played its part in this unusual event, with the company looking to talk about social distancing with Groundhog Day as a focus.

As for an official follow-up, the 2019 video game Groundhog Day: Like Father, Like Son put players in the shoes of Phil Connor’s time-locked offspring.

That’s not the real groundhog

Mental Floss writes that famous hog Punxsutawney Phil (named after the Pennsylvania town) didn’t appear in the movie about his signature holiday. 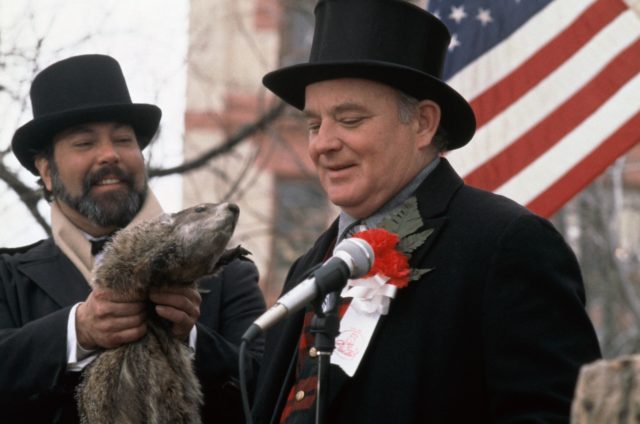 Why was that? Because the shoot went to Illinois rather than the genuine article. No Punxsutawney, no mascot! Would the real deal have treated Bill Murray any better? Guess we’ll never find out.