They’re the perfect after-dinner treat. You get something to munch, plus some words of wisdom on a strip of paper.

Despite its simplicity, the fortune cookie still has a fair amount of mystery about it. Let’s crack open the facts concerning this long-established snack.

Where do the nuggets of enlightenment come from? The answer is on the sobering side. As Mental Floss notes, fortune cookies rely on “a handful of factories that each churn out upward of 4 million little slips of wisdom a day.”

But it isn’t all noses to the grindstone type stuff. Wonton Food’s former VP Donald Lau was reportedly inspired by whatever “silly” thing got his attention, according to Spoon University.

Lau was succeeded as chief writer by James Wong, who talked about the process to CBC. Seems he grabs whatever he has to hand when an idea strikes. “I do have a collection of gum wrappers and napkins and even toilet paper,” Wong revealed. 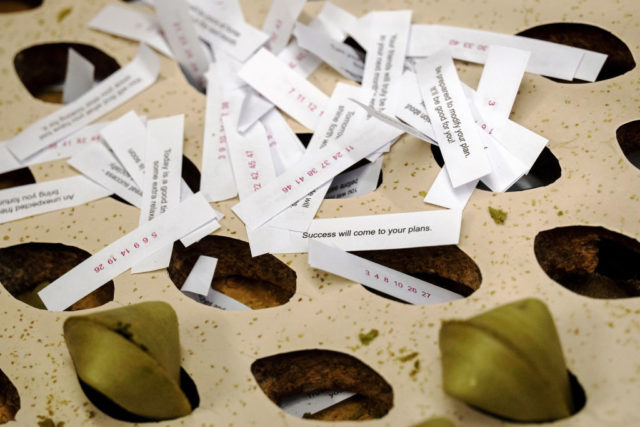 In 2005, there were multiple reports of people winning big on the Powerball lottery. How did they do it? Through fortune cookies.

Numbers rocketed from the typical handful of cookie consumers to over 100 players. Hundreds of thousands of dollars were handed out, though authorities smelled a rat. A big investigation was launched, though ultimately it appears the public got genuinely lucky.

Spoon University writes that the off-kilter wording you sometimes find in fortune cookies is down to translation issues. They highlight GuruGraffiti, which unveils such unintended classics as: “You will never have to worry about a steady income.” Good to know! 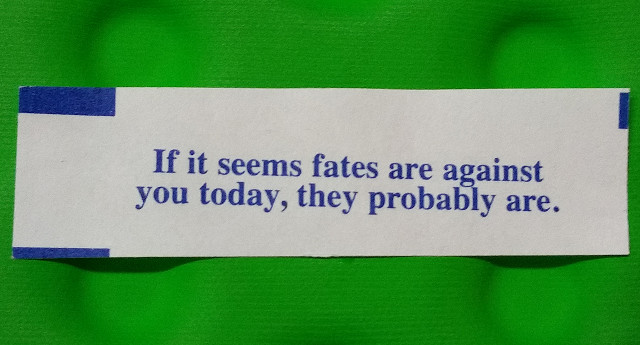 Chinese restaurants may be the go-to destinations for a fortune cookie. But they are in fact a Japanese invention.

The New York Times reports on Yasuko Nakamachi, who researched the distinctive snack’s origins. Her mission to munch kicked off after spotting fortune cookies being made at the Sohonke Hogyokudo bakery near Kyoto in the 1990s.

We’ll go into the cookie’s Japanese connection and how they traveled the world shortly.

The recipe was different

Nakamachi witnessed not only a game-changing chapter in fortune cookie history, but also a different kind of snack. The Times describes the Sohonke Hogyokudo bakery offerings as “bigger and browner, as their batter contains sesame and miso rather than vanilla and butter.”

Meanwhile, the words of wisdom are “pinched in the cookie’s fold,” as opposed to being sealed within. Spoon University writes this was done to stop accidental consumption of the paper. There was also a sweet twist to the experience, in the shape of juicy orange wedges. 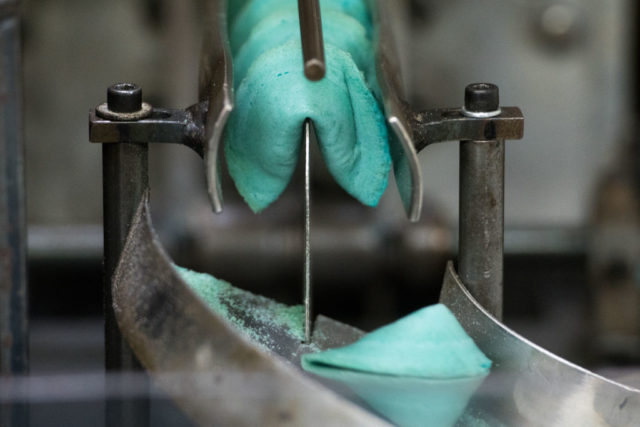 History refers to Jennifer 8. Lee and her book The Fortune Cookie Chronicles (2008). She mentioned the “tsujiura senbei”/“fortune cracker,” which was around in late 19th century Japan. There’s also evidence in the form of illustrations from the time.

Whatever the recipe, fortune cookies are apparently put together with four ingredients – “flour, sugar, vanilla and oil”.

Fortune cookies are straightforward snack treats. Yet getting that paper slip inside the casing is trickier than it looks.

How Stuff Works went to celebrity chef Pailin Chongchitnant for the goods. She said the cookie dough must be baked for exactly the right time, not too little and not too much. That way it can be fortune’d up and folded over. The end product cools down and should go crispy. 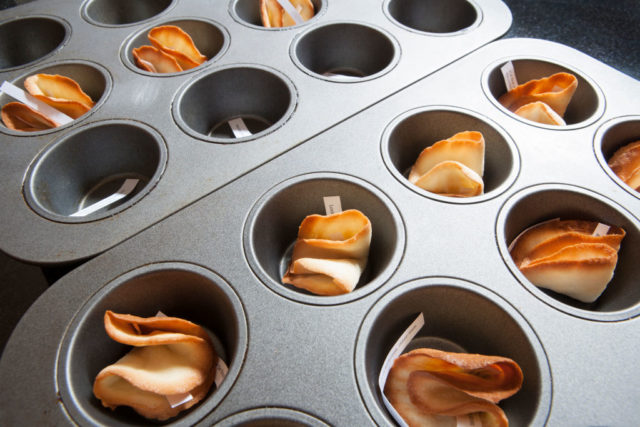 Japan. As History notes, the Chinese Exclusion Act of 1882 meant shocking discrimination against a minority. But it also ushered in a healthy period for some Japanese workers and businesspeople, who plugged the gap and introduced the fortune cookie in their establishments.

The site writes about sources pinpointing “the Japanese Tea Garden in San Francisco’s Golden Gate Park as the first known U.S. restaurant to serve the treat.”

How come they’re associated with the Chinese?

Apparently, the appetite for sushi and such wasn’t big in America as the 20th century dawned. So it was seen as a wise move for arrivals to run Chinese restaurants instead. However, a twist in the tale followed decades later, thanks to the onset of World War II. 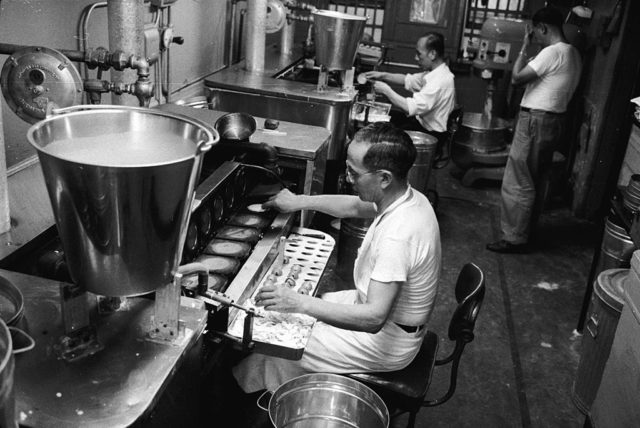 circa 1955: Fortune cookies are made at a factory in Chainatown. (Photo Credit: Evans/Three Lions/Getty Images)

America didn’t commit to the conflict until late 1941, when the Imperial Army bombed Pearl Harbor. Enter Executive Order 9066, brought in by President F.D. Roosevelt. Under this instruction, the Japanese were pushed out of the market. Among those taking advantage were Chinese movers and shakers.

You probably won’t be given a fortune cookie after a meal in China. Some think the practice came about through the American habit of wanting a little something extra following a feeding. It has virtually nothing to do with the place where this famous cookie is believed to come from.

Back when he was a basketball player, Yao Ming received the “honor” of a promotion based on fortune cookies.

Using a supposedly Chinese snack food to trumpet a hoop shooter from Shanghai? Sounds a little iffy. Did Ming care? Absolutely not – he figured fortune cookies were a US thing anyway.

Why hand make these iconic treats when they can be produced in bulk by a machine? Making its debut in the 1960s, this cookie delivery system brings all of the fortune and none of the fuss. Spoon University writes that machines became fully automated in 1980. 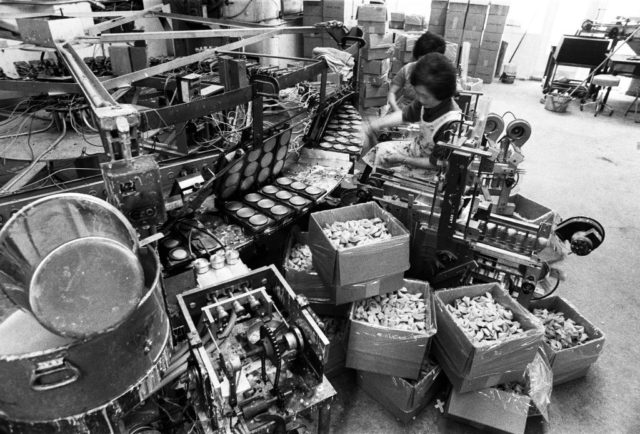 They can be very lucky

Reporting in 2017, Business Insider covered a study that showed a possible link between fortune cookie “lucky numbers” and lottery wins.

Could receiving a simple cookie be the key to unlocking a jackpot? This person certainly thinks so…

More from us: 10 Everyday Food And Drink Items With An Unexpected History

Gabriel Fierro opted for a Mega Millions online ticket with a Megaplier chaser. The first cost $3 and the latter – which multiplied the amount in the event of a win – was a mere $1, as reported by Today. 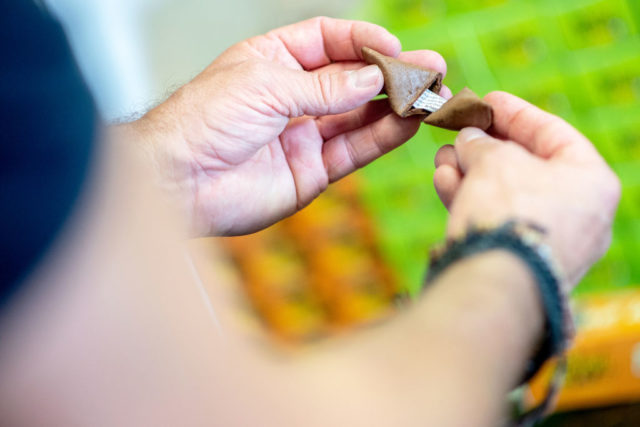 By banking on the contents of a fortune cookie to select the numbers, Fierro is now one wealthy snacker.

« What Does The Long History Of Debutante Balls Say About the Role of Women in Society?
The Crown: How Netflix Casts The Controversial Royal Drama »