What Does The Long History Of Debutante Balls Say About the Role of Women in Society?

Debutante balls have played a significant role in the lives of many women for centuries. Today, these balls continue to capture the imagination of young girls everywhere as coming-out parties are featured in both television and movies. Shows like Gossip Girl, and more recently, Bridgerton, often portray the significance of a debutante ball in a young girl’s life. Although these galas look fun and glamorous, we hadn’t really considered the history of debutante balls, and what life was really like for the young women who were chosen to be presented to society, until now.

A tale as old as time 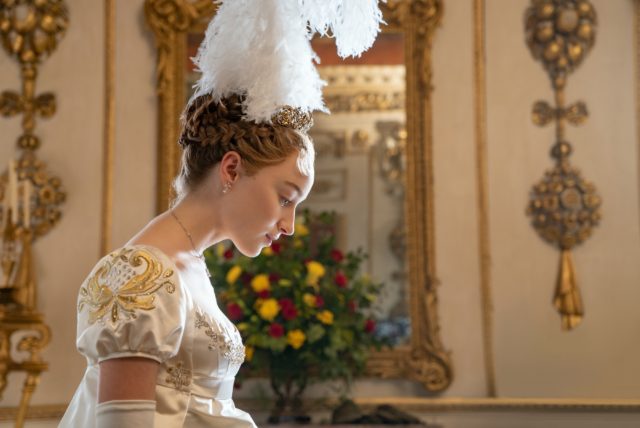 The tradition of the “social season” lasted nearly 180 years- from the reign of George III to Queen Elizabeth II. During this time period, young upper-class women made their formal debut into society by curtseying to the monarch.

After their presentation at court, these young women would participate in a variety of social events, where they would meet other young women and (hopefully) find a wealthy husband. If a debutante became engaged after a single social season, she was considered to be extremely successful. However, by the twentieth century, most debutantes participated in at least two social seasons before becoming engaged.

What to do with ‘all these girls?’ 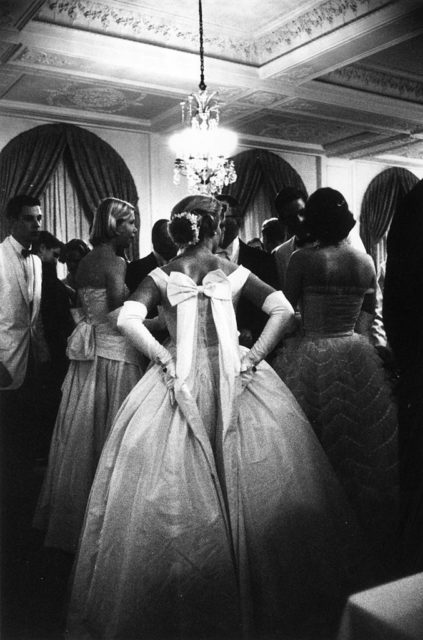 During this time, the law prohibited young wealthy women from inhabiting (and burdening) their fathers’ estates. Thus, in the sixteenth century, the debutante ritual was instated to help marry off all these young women, and ensured that the social status of an entire family remained intact. 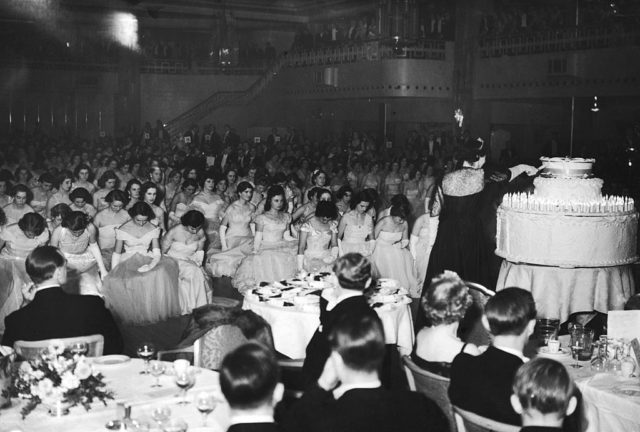 A host of debutantes perform a solemn curtsey while the Duchess of Roxburghe cuts a giant birthday cake with 208 candles, during the Queen Charlotte Ball at Grosvenor House in London, May 1952. (Photo Credit: Keystone/ Getty Images)

Aristocratic young women were presented in the court of the English monarch before the Protestant Reformation so the Queen could choose her ladies-in-waiting from prominent English families. However, the structure of the debutante ball that we know today largely emerged during the reign of King George III and Queen Charlotte.

Queen Charlotte’s Ball and the introduction of debutantes into high society was the highlight of London’s social season each year. This social season consisted of balls, sporting events and parties. Each year this social season lasted from Parliaments’ Easter session break until August.

Who could become a debutante? 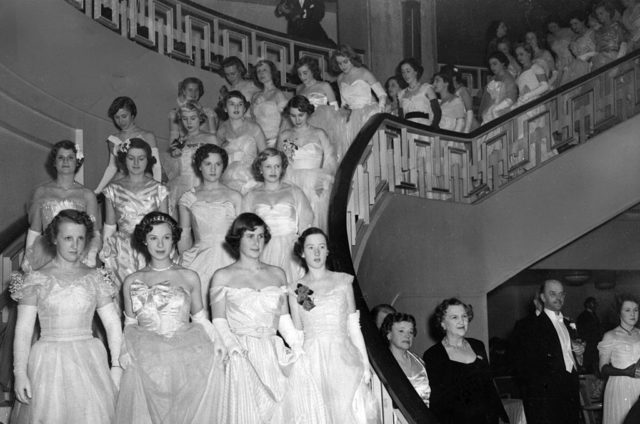 The massed ranks of debutantes at the Queen Charlotte’s Ball at Grosvenor House descend into the ballroom, 1950. (Photo Credit: Keystone/ Getty Images)

The purpose of debutante balls was to ensure that a woman married well. This meant that debutante balls were not open to everyone in English society. By 1859, in addition to members of the aristocracy, the daughters of the clergy, military, naval officers, physicians and barristers could be presented.

In the nineteenth and twentieth centuries, the wealthiest American heiresses would be presented at the British court in hopes of meeting and falling in love with an aristocrat. Only women who had been presented at court could recommend a debutante. There are instances where an aristocratic woman with limited financial resources accepted payments from wealthy American families to present an American debutante at the British court. 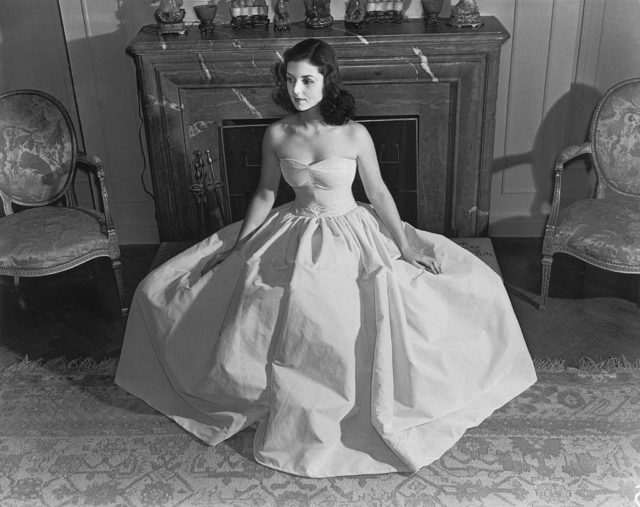 Brenda Frazier Kelly Chatfield-Taylor, whose name was once synonymous with glittering debutante balls and the social whirl, in 1938 when she made her debut, a social event of the season that attracted 1,000 people. (Photo Credit: Bettmann/ Getty Images)

Although the practice originated in England, debutante balls and the presentation of young women to high society soon spread throughout the world. After the United States became independent from England, debutantes were presented in Washington, D.C. to the president and the first lady. Soon individual American cities and communities organized their own versions of debutante balls.

The decline of debutantes 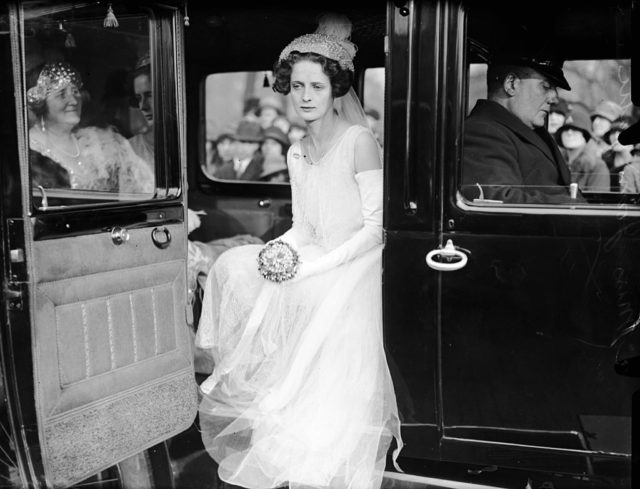 Of course, debutante balls and coming-out parties are held today, although they no longer hold the same prominence that they once did. By the twentieth century, the presentation of debutantes at court increasingly became outdated as the times changed. In 1921, the tradition was put on hold because of the Coal Strike.

British monarchs were increasingly becoming impatient with the drawn-out ceremony they had to preside over. In 1936, King Edward VIII left halfway through debutante presentations and had his aide announce that the rest “could consider themselves presented.” the King then left to play golf with Wallis Simpson. 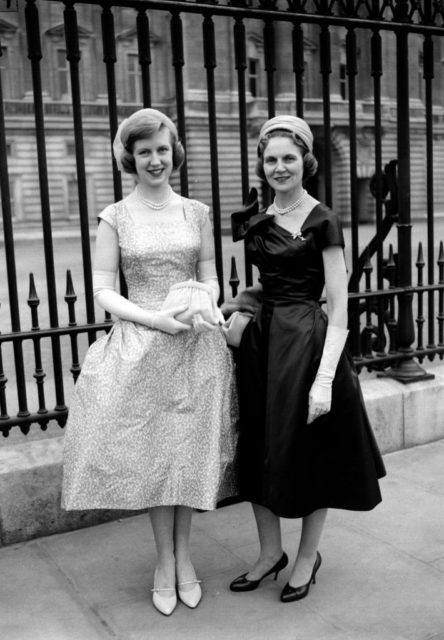 Lady Lowson (r) and her daughter, Melanie, arrive at Buckingham Palace, London, for one of the last presentation parties given by the Queen, 1958. (Photo Credit: PA Images/ Getty Images)

By the 1950s the practice was seen increasingly as old fashioned. Princess Margaret once declared that “we had to put an end to it. Every tart in London was getting in.” Even Prince Philip called the entire thing “bloody daft.” In 1958, Queen Elizabeth II announced that debutantes would no longer be presented at court. By 1976, Queen Charlotte’s Ball had folded from a drop in debutante participation.

What does the practice of debutante balls tell us about women’s history? 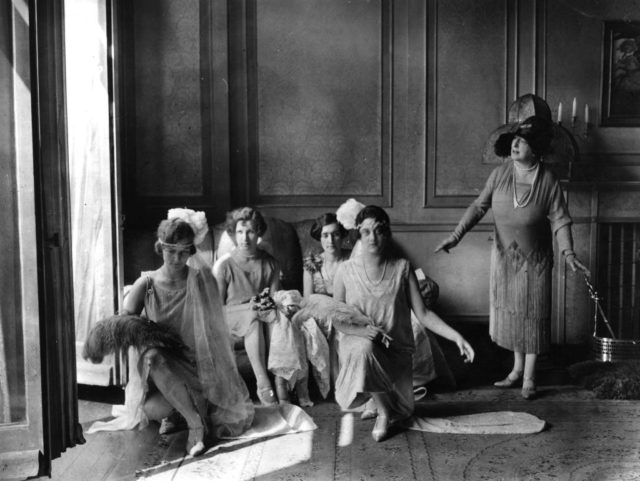 Debutante balls provide historians with an interesting way to look at women’s history. The original focus of debutante balls was money and status, rather than the concern for the well-being of women who had no rights. In this way, young women were seen as commodities that could be bartered over, rather than as real people. Their societal value was based on the men they attracted and the parties they got invited to. 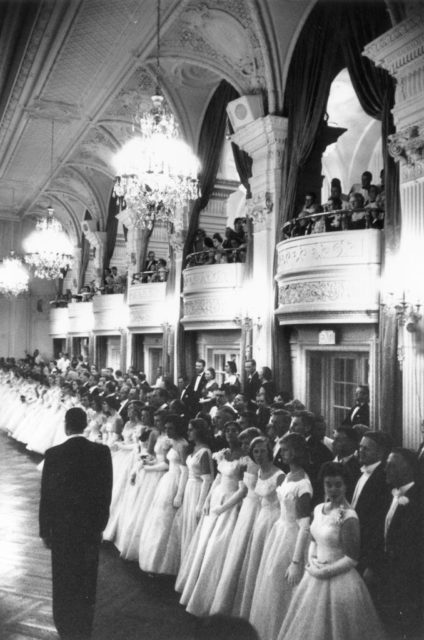 Interestingly, one could argue that the debutante season was really the only time young women had complete control over their own minds and bodies. As historian Kristen Richardson has pointed out, the transitional space between her parents’ house and her husband’s was the freest a young woman might ever be.

More from us: How Did JFK Get So Rich? The Boozy Story and Business Savvy Behind the Kennedy Fortune

There is no single reaction that can sum up how young women felt about being debutantes. Relayed in countless diary entries, some girls loved the experience and thrived under the pressure, while others hid in the corner during each ball or social event. Regardless of how the participants felt, the debutante ritual was important to many people with the right name and family history.

« What Happened to the Keatons and Co. After ‘Family Ties’ Ended…?
Crack Into Some Unexpected Facts About Fortune Cookies »