Oscar Wilde was one of the most popular playwrights and well-known personalities in London in the early 1890s. How much do you know about the witty writer and his tragic life? Read on to learn more about the man behind The Importance of Being Earnest and many other great works.

His whole name is rather a mouthful 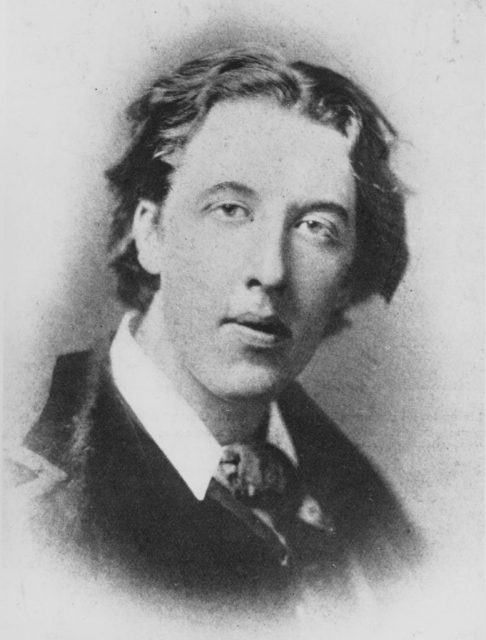 Oscar Wilde’s full name was almost as long as one of his snappy one-liners. He was Oscar Fingal O’Flahertie Wills Wilde.

His parents were Sir William Wilde, a leading ear and eye surgeon, and Jane Wilde, a poet.

He could speak several languages – except that of his birthplace 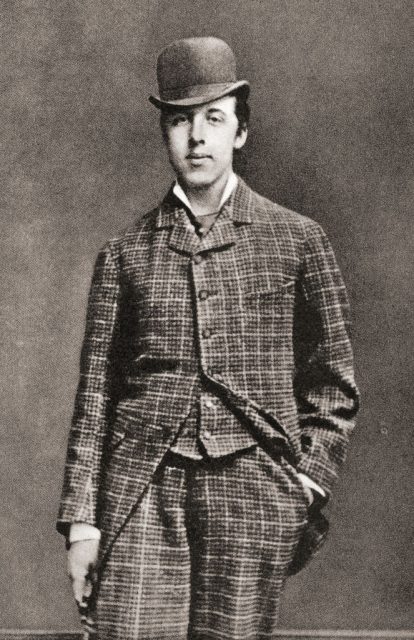 Having been educated at Trinity College in Dublin and Magdalen College in Oxford, Wilde became fluent in English, German, and French. He also had a basic knowledge of Italian and Greek.

The one language he never mastered was Irish – ironic given that he was of Irish descent. His birthplace – 21 Westland Row – is now the Oscar Wilde Centre of Trinity College Dublin.

He only wrote one novel and edited a woman’s magazine 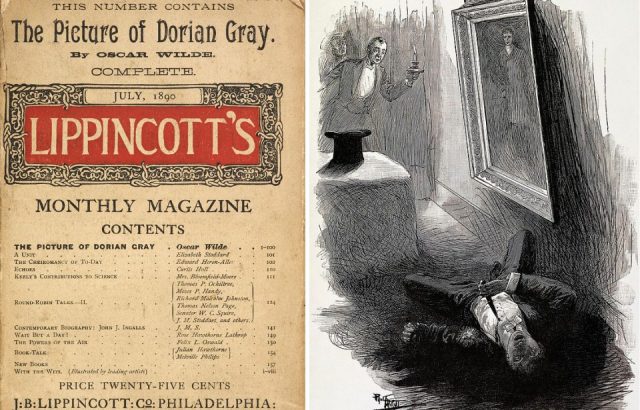 A picture of the cover of the July, 1890 edition of Lippincott’s Monthly Magazine, left, and the death of Dorian Gray, illustration from The Picture of Dorian Gray, right. (Photo Credit: Unknown author – Public Domain, & DeAgostini/Getty Images)

He might be one of the world’s most famous writers, but he only actually published one novel: The Picture of Dorian Gray. The rest of his works were essays and plays. He also put together a short story collection for children.

Wilde was also an editor at The Lady’s World magazine, which he renamed The Woman’s World. Having expressed an opinion that the publication was “vulgar, trivial, and stupid,” he set out to turn it into a magazine that would “deal not merely with what women want to wear, but with what they think, and what they feel.” He introduced pieces on parenting, culture, and politics to go alongside columns on fashion and art. 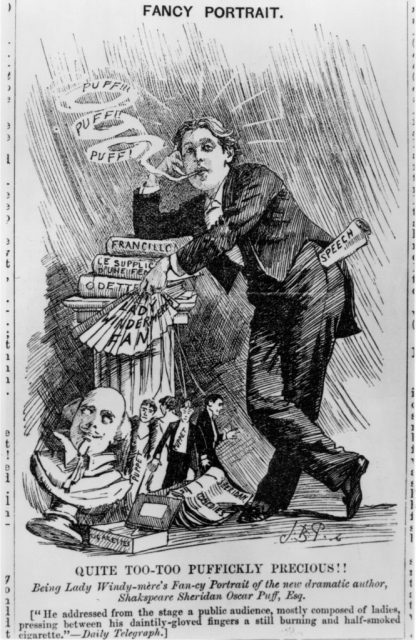 In 1881, Oscar Wilde published his first book of poetry entitled Poems. The reception was not good. As Punch magazine quipped: “The poet is Wilde, but his poetry’s tame.” Some critics even went so far as to claim Wilde had plagiarized pieces from the Romantics and Pre-Raphaelites. Others claimed it wasn’t plagiarized, just highly derivative.

In what must have been a bitter moment for Wilde, the Oxford Union declared the book to be plagiarized and required the librarian to return the copy he had requested from Wilde in the first place. The librarian did so, with a letter of apology.

Satirists made fun of his outfits 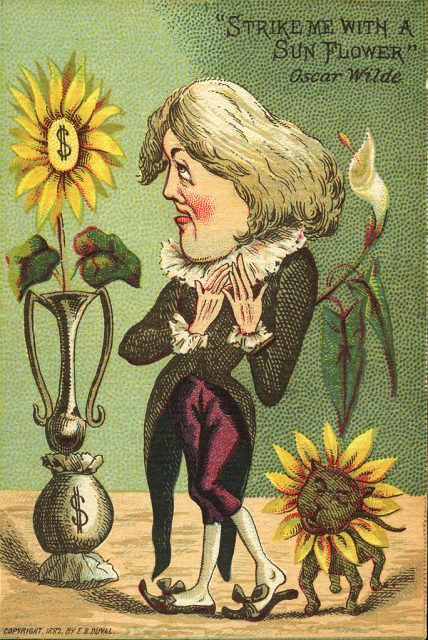 Oscar Wilde’s caricature appears on this trade card from Duval litho company of Philadelphia in 1882. The copy reads ‘Strike Me With A Sun Flower’. (Photo Credit: Transcendental Graphics/Getty Images)

Oscar Wilde rose to the top of high society. While that means he was often quoted and admired, it also opened him up to ridicule. His outfits were considered flamboyant, and they were sometimes used as the basis for cartoons lambasting the writer.

The Irish Times reports that Wilde actually got his eccentric fashion tastes from his mother. She had always put on unusual outfits, and they became more bizarre later in life when she could not afford new clothes and had to create imaginative combinations of those she already owned.

He was married to a writer and had two sons 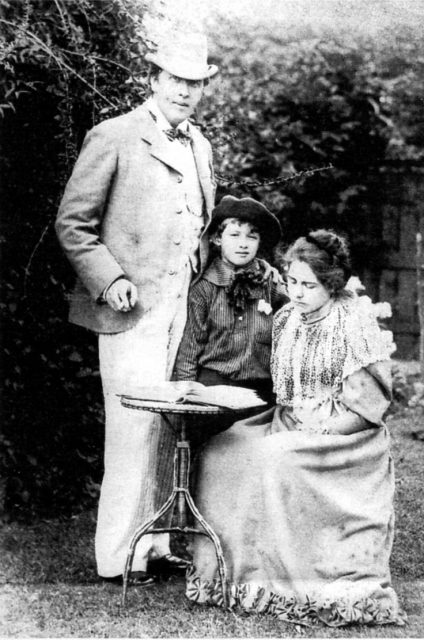 Many people remember Wilde first and foremost as a persecuted homosexual, someone put on trial for “indecent acts.” However, he was also married to a female writer called Constance Lloyd. Together, they had two sons – Cyril and Vyvyan.

His mother was a revolutionary and an inspiration to him 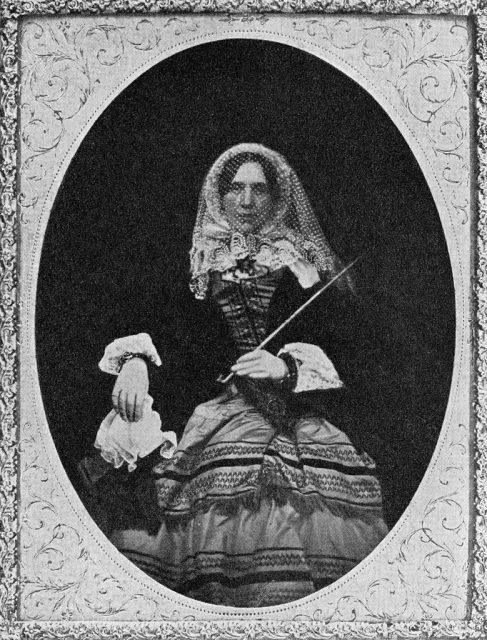 Jane Francesca Wilde, née Elgee, wrote for an Irish national newspaper under the pen name of “Speranza.” Her pseudonym ensured that her family wasn’t embarrassed by or connected to her writing on such topics as the suffering during the Irish Famine.

She ended up on trial herself, for libel, after she complained about a young woman called Mary Travers alleging that Sir William Wilde had drugged and abused her. Speranza’s biographer, Joy Melville, noted that Speranza refused to settle out of court and instead conducted herself with composure and wit in the courtroom.

There is speculation that Speranza said she’d refuse to speak to Oscar if he backed down from his own trial, and Melville adds: “Perhaps she remembered her own witness box appearance… when she successfully survived her skirmishes with the prosecution and the plaintiff was only awarded damages of a farthing. It would have seemed unlikely to her that her son could possibly lose a court case.” 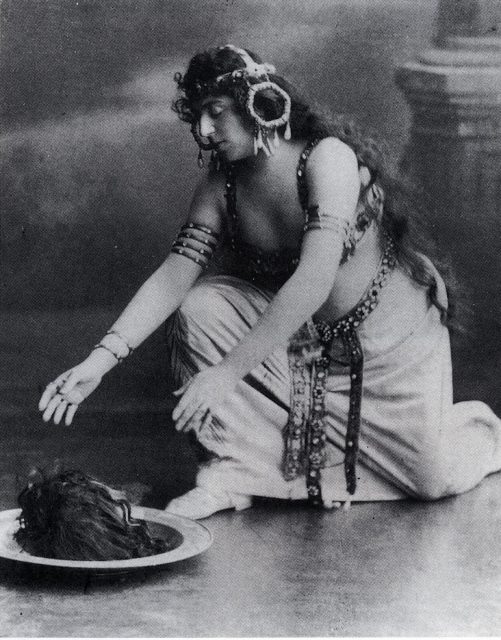 Known as a witty playwright with a taste for the decadent, it might come as no surprise to find that the Lord Chamberlain banned one of Oscar Wilde’s plays. Although Salomé had been performed in Paris, the play was refused a license in England.

Salomé is about a lustful young woman seducing King Herod. What got the play banned was not the lust or the seduction but the fact that since the Protestant Reformation, plays could not be performed on stage in England if they involved biblical characters.

Even putting him in jail couldn’t stem his genius 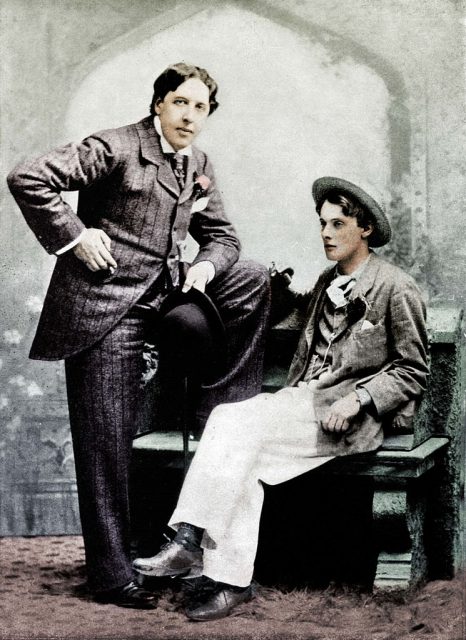 After being convicted under Section 11 of the Criminal Law Amendment Act 1885 for “gross indecency,” Wilde was sentenced to two years in jail. Some of his jail time was spent at Reading Gaol, which operated under the theory of Christian penance. Prisoners were not permitted to talk but had to be silent and consider their crimes while carrying out hard labor. The only books they were permitted to read were the Bible and The Pilgrim’s Progress.

Writing was not allowed, except for letters, so Oscar wrote frequently to his lover, Sir Alfred Douglas. One particularly long letter that he wrote about his spiritual journey was published posthumously in 1905 with the title of De Profundis.

When he was released, he wrote The Ballad of Reading Gaol, a poem inspired by the harsh conditions of his imprisonment and the execution of fellow inmate Charles Thomas Wooldridge. It became his last published work.

The jail where he was imprisoned is now an art gallery 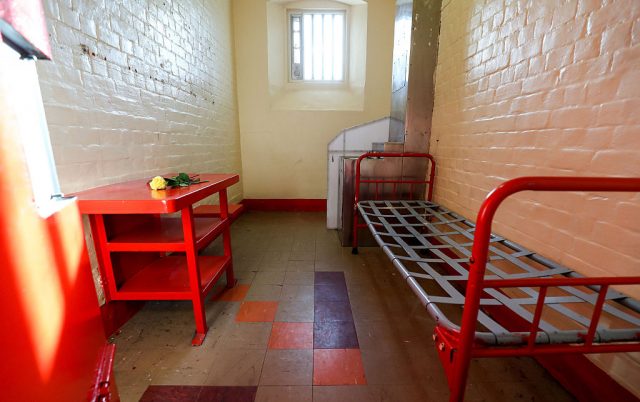 Located 40 miles from central London, HM Prison Reading was operational until 2013. After remaining closed for three years, it was reopened in 2016 to host an art exhibition that displayed works on the themes of imprisonment and separation.

Witty to the last 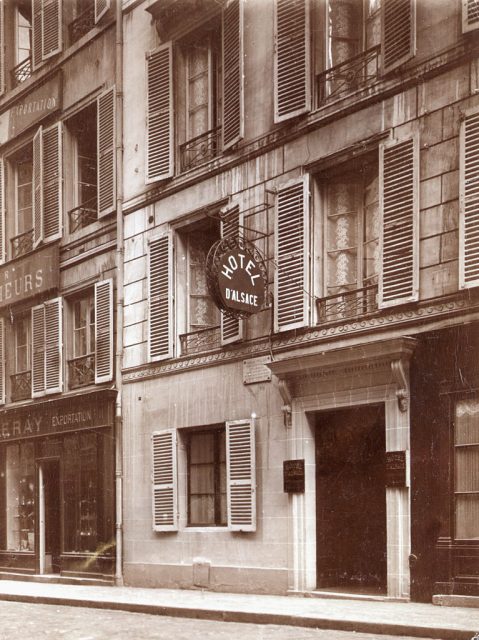 It seems only fitting that a man renowned for his witticisms should deliver amusing final words. Reportedly, Wilde said: “My wallpaper and I are fighting a duel to the death. One or other of us has got to go.” He died in a Parisian hotel in 1900, aged 46.

Some sources claim that his last words were, in fact: “I am dying beyond my means. I can’t even afford to die.”  These poignant words reflect the fact that, after he was released from prison, Oscar Wilde traveled to France and was forced to live there in poverty. Since there is no official record, we will never know for sure.

His tomb was being eroded by lipstick 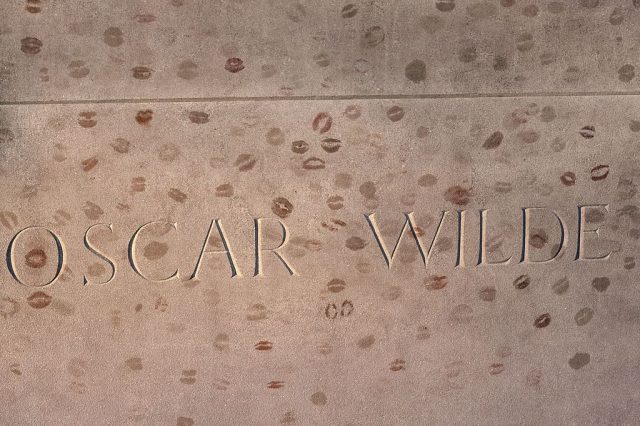 When Wilde died, he was bankrupt, and his friends could only afford a sixth-class burial at the Cimetière de Bagneux outside Paris. However, over the subsequent years, his friends managed to raise enough money to purchase a plot in perpetuity at Père Lachaise Cemetery. A sculpture by Jacob Epstein was commissioned as a memorial and unveiled in 1914.

In the 1990s, a trend arose where visitors to Wilde’s tomb would kiss the stone as a sign of respect, often leaving a lipstick mark. People would also leave personal messages in red marker on the stone. A combination of lipstick grease and the need for repeated cleaning started to erode the stone, so the French and Irish governments paid for a glass screen to be erected in 2011 to protect the tomb from further damage. 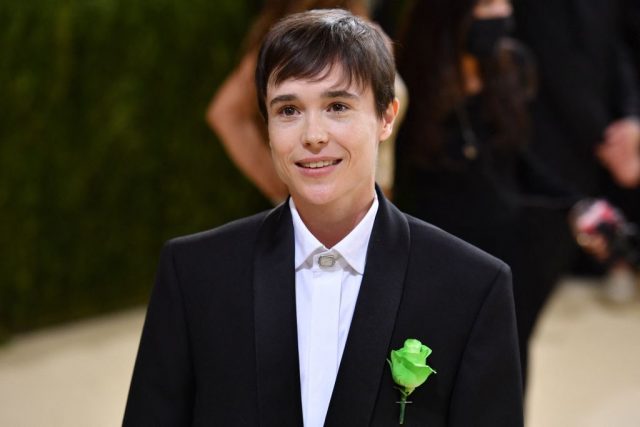 American actor Elliot Page showed up at the 2021 Met Gala wearing a bright green rose on his lapel, which was almost certainly a nod to Wilde. It was Page’s first red carpet appearance since coming out as trans in December 2020.

More from us: Getting to Know the Real Roald Dahl – An Imagination for the Ages

During Wilde’s lifetime, the green carnation became a symbol for homosexual men after he asked friends and fans to wear them to the opening night of his 1892 play Lady Windermere’s Fan, and it has remained an emblem for queer men ever since.

« Fact Or Fiction: Can You Really See The Great Wall Of China From Space?
Remember When Ringo Walked Out On The Beatles And Paul Had To Play The Drums? »