Hilarious Wild West Slang We Need To Come Back In Style

“Where have all the cowboys gone?” as a song once asked. Come to think of it, where did all those classic cowboy expressions go also?

Some are still around. “Get a wiggle on” is one you might use today. You may also know of “skedaddle.” Maybe you’ve even used “balderdash” once in a while.

Are you aware this is only the tip of the iceberg? Not that you saw many icebergs in the Old West, but you get the idea. Anyway, here’s some neglected cowboy speak in dire need of an airing…

It may be a mouthful, however, “absquatulate” has a simple meaning. To flee the scene, typically because you’re a no-good cowpoke who does that kind of thing. 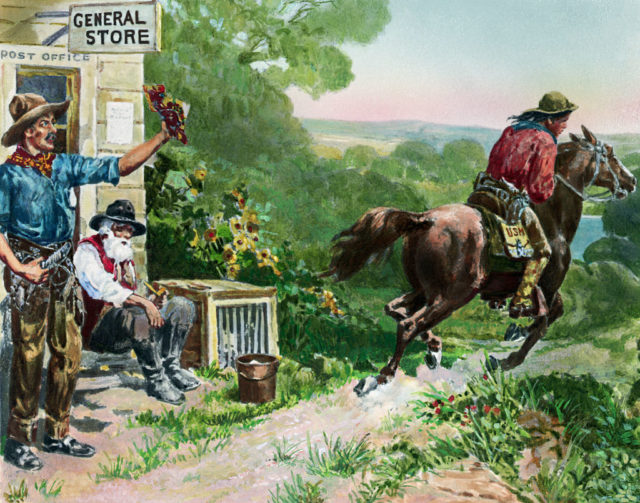 Sounds painful! But don’t worry, this is just saying you’re on your way. The absquatulator runs off. The amputator of timber, or “mahogany,” is merely prepared for the journey ahead.

If you talked too much in the Old West, you were branded a “blatherskite.” It’s not a million miles from “blabbermouth.” but sounds a little cooler. 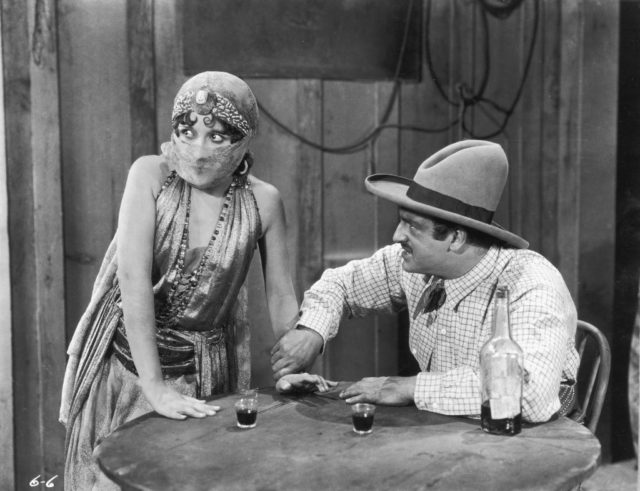 A man wearing a cowboy hat angrily grabs the wrist of a woman wearing a veil in an unidentified still from a silent Western film. The man sits in a saloon with a bottle of liquor and two shot glasses on the table. The woman wears a headdress and an exotic costume with a beaded necklace. (Photo Credit: Hulton Archive/Getty Images)

Beware the “bunco artist,” or con man/woman. Oxford Languages goes on to mention being “buncoed,” or swindled/cheated.

More “calf slobbers” with your pie? What in the name of True Grit does that mean? Covering Lonely Planet’s USA Phrasebook from 2002, the Chicago Tribune links the expression to Arkansas.

What kind of pie gets compared to a drooling baby bovine…? The answer is meringue. Yuck! 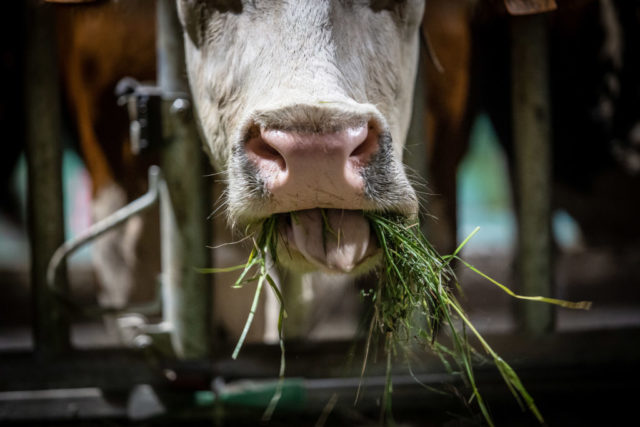 This refers to anything askew, for instance, in terms of direction of travel. Dictionary.com connects the 19th-century word to “cater-cornered” – diagonal – and “wampish” – a Scottish definition of floppy movements.

“Doxing” is a familiar word in the 21st century, meaning the exposure of someone online. A “Doxology works,” on the other hand is far from that. A purer prospect from the Wild West, it relates to Christianity in a light-hearted way.

Doxology comes “from the ancient Greeks via Latin to English,” according to Historical Post, and is described as a praiseworthy act. The “works” part refers to God’s church – a “Doxology works” being like a factory for the faith! 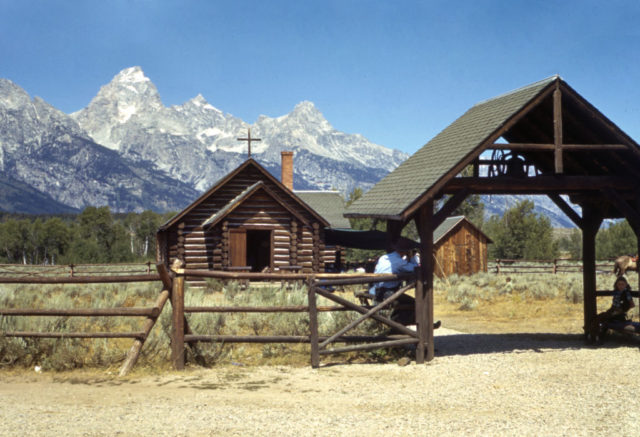 Chapel of the Transfiguration, a log cabin church, which sits at the foot of the snowy mountains (Photo Credit: Jim Heimann Collection/Getty Images)

The cats of County Kilkenny weren’t so much furballs as balls of fury. As mentioned in historic accounts/stories, the paw-packing pair went at each other until only their tails were left. Cowboys used bullets instead of claws but the effect was pretty much the same.

We’ll avoid the first thing that comes to mind when hearing this expression!

“Four-flusher” actually referred to “a card sharp who habitually bluffed that they had a flush, or cards of the same suit,” written by Historical Post. In other words, a crafty player with a poker face. 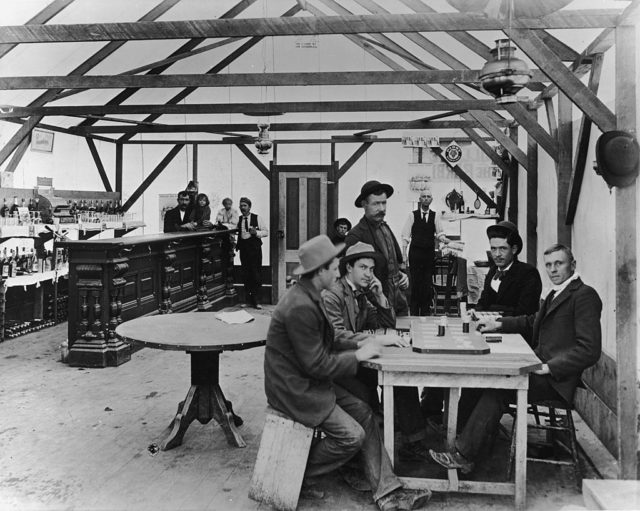 circa 1875: Interior view of a saloon, where a group of men sit gambling at a table and workers pose in the background. (Photo Credit: Al Greene/Hulton Archive/Getty Images)

Should a sweetheart wish to ditch their beau, giving them the mitten was how they did it back then. Yes, really. Where did this peculiar expression come from?

World Wide Words speculates that the origins lie with a European tradition of rejecting agreements by sending gloves back and forth. The mittens of the Wild West version appear to be verbal rather than physical!

A fair few Old West expressions are about cheating behavior. Someone who honeyfuggles basically slathers their lies in sweet talk, deceiving those closest to them for maximum impact. 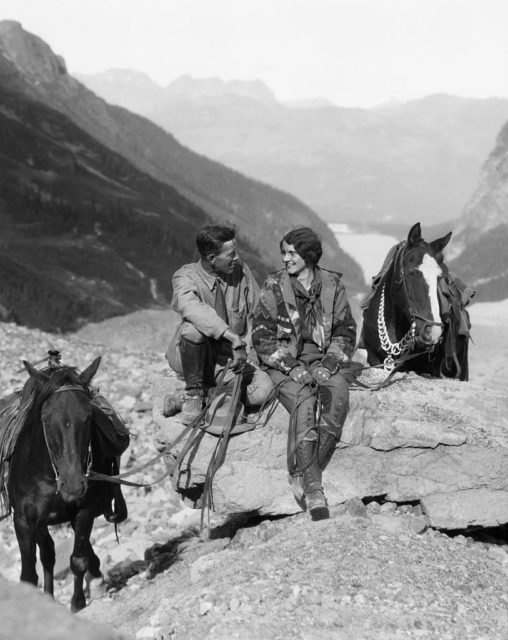 Those cowboys with romance in mind might consider “making a mash.” Forget potatoes, this was all about the art of wooing your intended. The expression “mash note” is used today in reference to a love letter.

Bought a product and don’t like what you see? You might want to go to the comments section and describe the company as a “shoddyocracy.” A few confused emojis may appear in response, but just hit back with a cowboy emoji to let them know where the expression comes from. 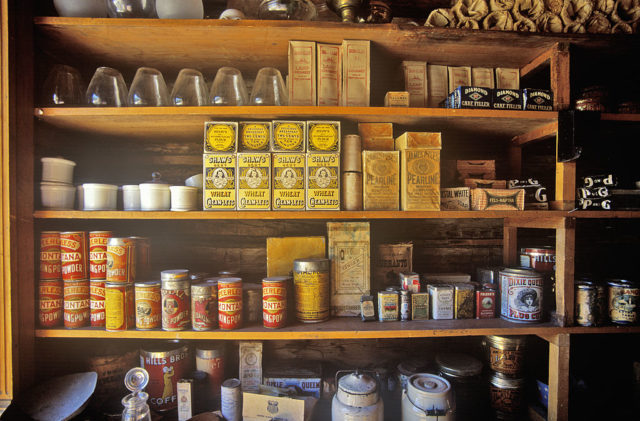 “Oath” is associated with a promise these days, though it can also mean a cuss word. Merriam Webster defines “thunderation” as a “mild oath.” The user displays a fruity, and probably inappropriate, use of language!

More from us: We Aren’t Horsing Around With These Wild West Facts

Worse than a cat in a room full of rockers

Now this expression should be clawed back for public use immediately. 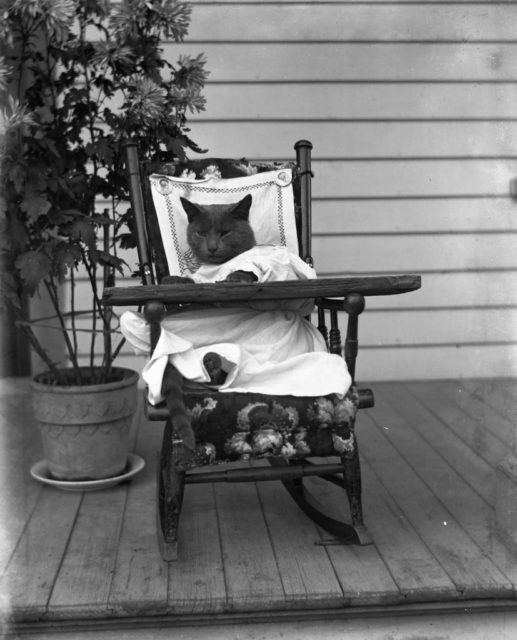 Rocking chairs may be a thing of the past but a scaredy-cat lives forever. They had them in abundance back in the Wild West, the same as videos on YouTube today. Legends of America describe this as “Someone who is really nervous.”