That Time Queen Elizabeth Made a Hilarious Joke About Daniel Craig

Queen Elizabeth II was a hilarious person. According to James Bond actor Daniel Craig, the Queen loved to crack jokes in private.

The No Time to Die actor appeared on The Late Show with Stephen Colbert in early 2022. At one point, the talk show host decided to ask Craig what Queen Elizabeth II was like behind closed doors.

Daniel Craig, of course, first met the Queen in 2012 when he and the monarch did a skit for the London Olympics opening ceremony. This past New Year, Craig also received a Companion of the Order of St. Michael and St. George for his services to film and theater. This was the same honor that James Bond had received in the movies. 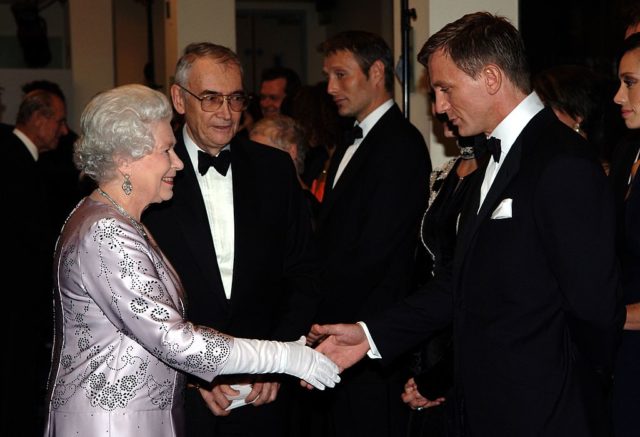 During the Late Show, Colbert asked Craig, “I understand that you may not be able to answer this question, but I’m gonna ask anyway: What’s she like in private?”

Craig had an answer that certainly surprised us. He said that the Queen was “very funny. Wants to crack a joke, and cracked a joke about me. We’re having our photographs taken and she just went, ‘Oh no, he’s the one that doesn’t smile.’ Fair enough!”

Colbert then asked Craig what the Queen’s corgis are like in private, to which Craig revealed that the dogs were very friendly, and added that he was “rolling around on the floor” with the Queen’s pets.

The 2012 Olympic skit featured Daniel Craig as James Bond accompanying Queen Elizabeth from Buckingham Palace to the Olympic Stadium. According to Queen Elizabeth’s royal dresser, when the Queen was asked about the skit, she was “very amused” and immediately agreed to participate, so long as she had a speaking part. In the skit, played during the Opening Ceremonies, Queen Elizabeth delivers the iconic line, “Good evening, Mr. Bond.”

Perhaps we shouldn’t be all that shocked that Queen Elizabeth was a jokester. After all, there are many photographs of the Queen and her late husband, Prince Philip, cracking up throughout their marriage. She also famously photobombed an Australian hockey player’s selfie in 2014 during the Commonwealth Games.

« Hilarious Wild West Slang We Need To Come Back In Style
Your Favorite TV Shows and Movies Have Hidden (And Not So Hidden) Secrets… Find Out Which Ones! »