Your Favorite TV Shows and Movies Have Hidden (And Not So Hidden) Secrets… Find Out Which Ones!

You’ve heard of behind-the-scenes. Well, these secrets take things to a whole new level. Whether hidden in plain sight or locked in a vault, here are some amazing facts your favorite shows and movies kept under wraps. 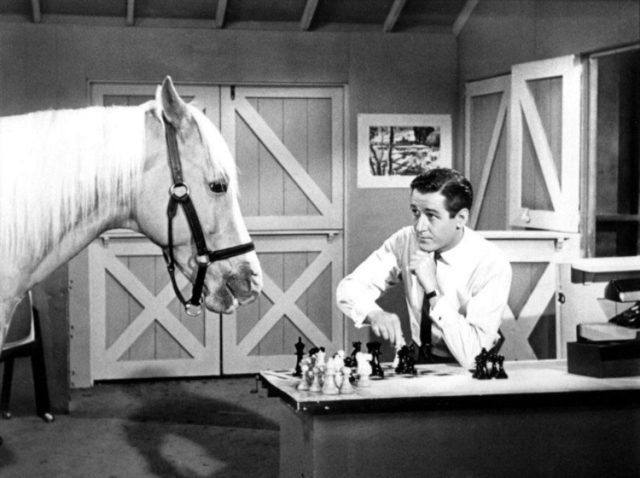 1960s sitcom Mister Ed famously featured a talking horse, voiced by Allan “Rocky” Lane. How did they do it? It wasn’t with peanut butter, as Lane claimed. Electric shocks? Thankfully not. CBR mentions that Mister Ed actually tried to spit out a specially-placed thread of nylon. From this, he learned to move his lips on cue without the thread. Talk about the nylon effect! 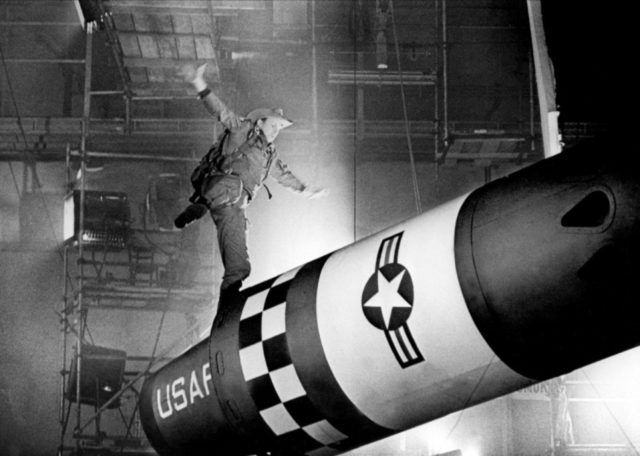 Dr. Strangelove or: How I Learned to Stop Worrying and Love the Bomb, 1964. (Photo Credit: kingmaus / MovieStillsDB)

The best-known scene from Stanley Kubrick’s Dr. Strangelove or: How I Learned to Stop Worrying and Love the Bomb is probably Slim Pickens’ character riding a nuclear bomb toward the climax. However, Kubrick shot another striking sequence that ultimately wasn’t used. In it, a pie fight broke out in the War Room, leaving Peter Sellers, George C. Scott and other key figures covered in custard. What a way to top off proceedings. 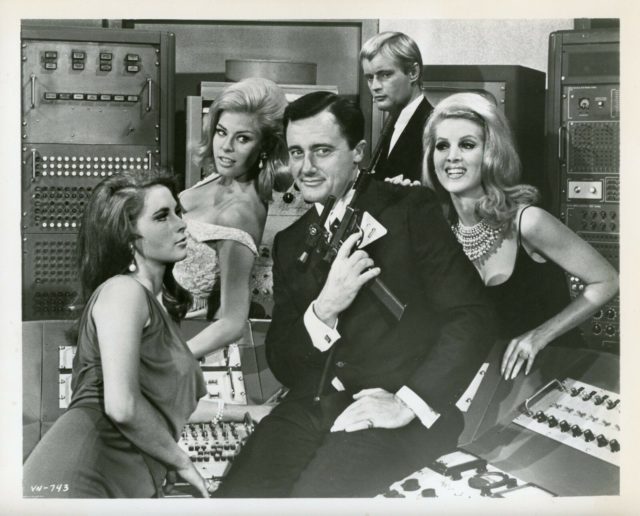 Spy franchises sometimes come across as a little gimmicky, and The Man from U.N.C.L.E. did it more than most. Board game maestro Reuben Klamer, who devised The Game of Life, lent his talents to Robert Vaughn’s Napoleon Solo. MeTV writes that “Klamer designed ‘The Gun,’ Solo’s nifty semi-automatic piece that could transform from a pistol into a rifle.”

It made a great weapon and also a cool tie-in toy! 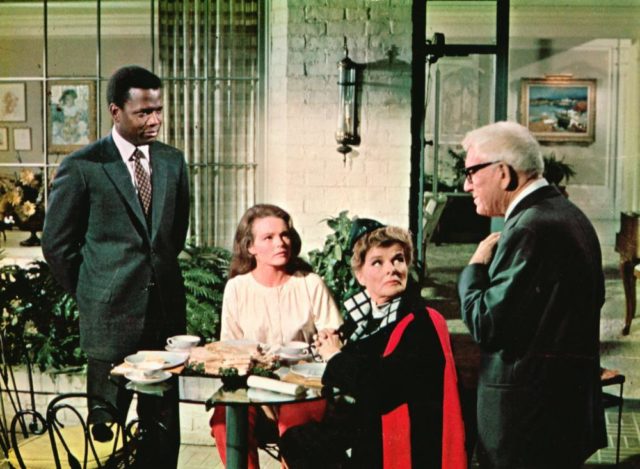 1967’s Guess Who’s Coming to Dinner starred the late Sidney Poitier, alongside fellow departed stars Spencer Tracy and Katherine Hepburn. Tracy passed away from a heart attack mere weeks after the product was finished. His ill health reportedly led producers to line up a different screenplay, which could be filmed if Tracy departed. Luckily, he made it to the end and a convention-busting classic was born.

The Love Boat had real passengers 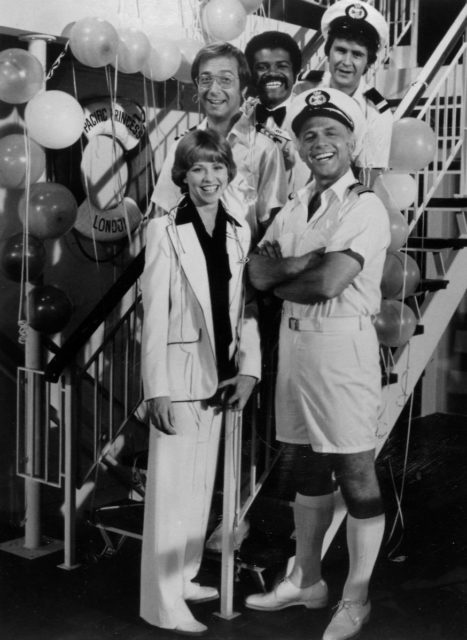 The Love Boat was a floating fantasy, yet if the passengers looked a little too excited, it might be because they’re regular members of the public! Apparently, you could feature on deck in exchange for thousands of dollars, just like a real cruise. 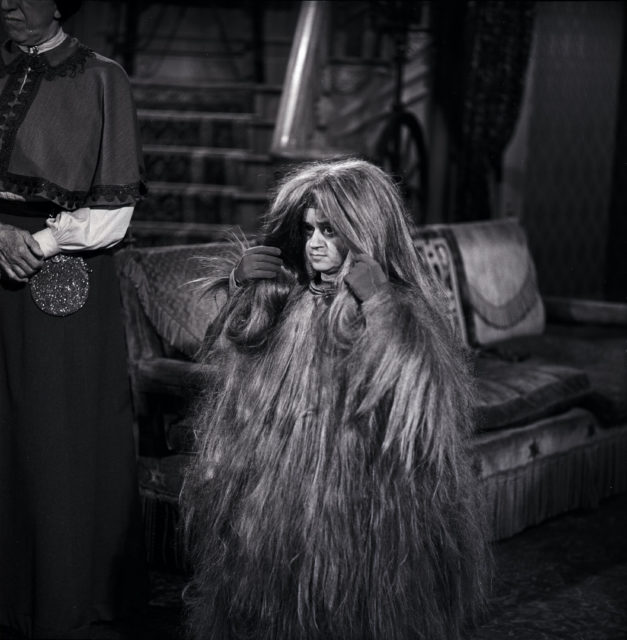 Felix Silla played the iconic Cousin Itt in The Addams Family, but there was more to him than the world’s freakiest hairstyle. He went on to become Twiki the robot for Buck Rogers in the 25th Century. Twiki’s voice was provided by Mel Blanc and Bob Elyea.

Silla passed away in 2021. His other roles include Wunka the Ewok in Return of the Jedi and the Emperor Penguin in Batman Returns. 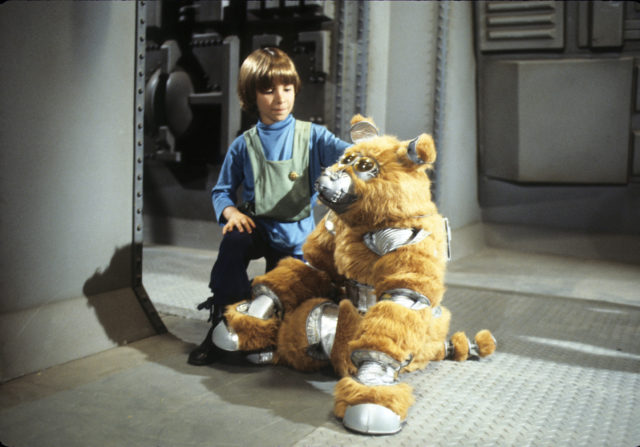 Battlestar Galactica was another production to feature Silla. However, he didn’t play star pet Muffit the Daggit. That honor fell to… A chimpanzee! Evolution – or Evie – the chimp reportedly inherited the role from a dog named Peanuts.

Yes, it may have been a futuristic saga, but the production was from a bygone era. 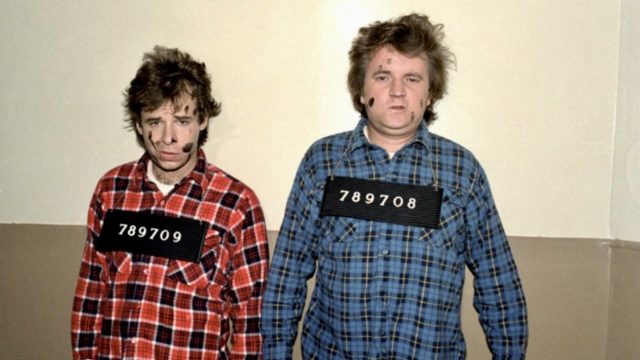 Rick Moranis and Dave Thomas starred in, co-wrote and directed the 1983 comedy, The Adventures of Bob & Doug Mackenzie: Strange Brew. This SCTV spin-off was a hit, although audiences may not have spotted the inspiration. The beer buddies story was based on the Bard. To be more precise, Shakespeare’s Hamlet. Villain Max Von Sydow was no stranger to the great man’s works. 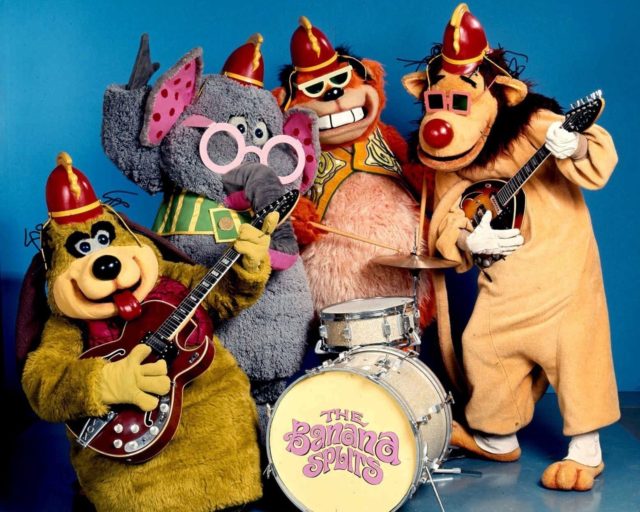 The Banana Splits gave young audiences a rocking good time on the small screen. However, behind one of their hits was a star known for his way with the ladies… Barry White. He wrote “Doin’ The Banana Split.” Not bad for an artist who came to be known as the “Walrus of Love” (a walrus didn’t feature on the show, as far as we’re aware).

Lollipops were a coping mechanism for Kojak 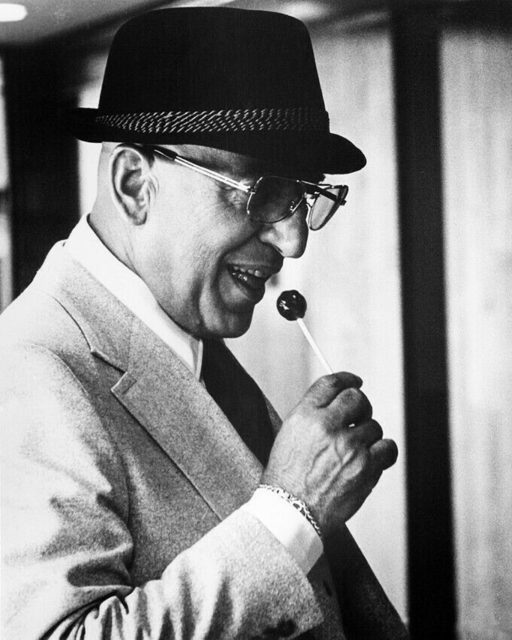 Telly Savalas caught criminals as tough cop Kojak, mainly between 1973 and 1978. The big mystery, however, was why he sucked lollipops all the time. Turns out, it was Savalas’ idea! The sweet treats took his mind off smoking!

In a 1993 interview with the Los Angeles Times, however, he told it somewhat differently. Speaking about a particular scene, he revealed that a meter maid “wants me to stop smoking. She hands me a lollipop, so I suck a lollipop… Like a jerk, I sucked a lollipop.” 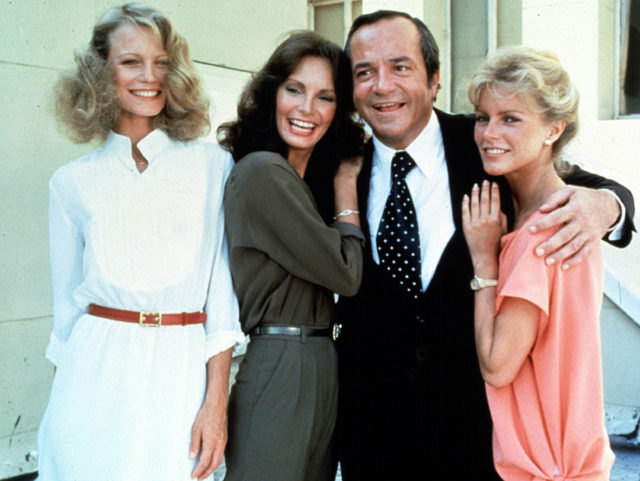 Where did the name “Charlie’s Angels” come from? Star Kate Jackson, apparently. She suggested the title after looking at a painting of angels in producer Aaron Spelling’s office. Who previously owned the painting? Frank Sinatra, whose office space Spelling inherited.

Raiders of the Lost Droids 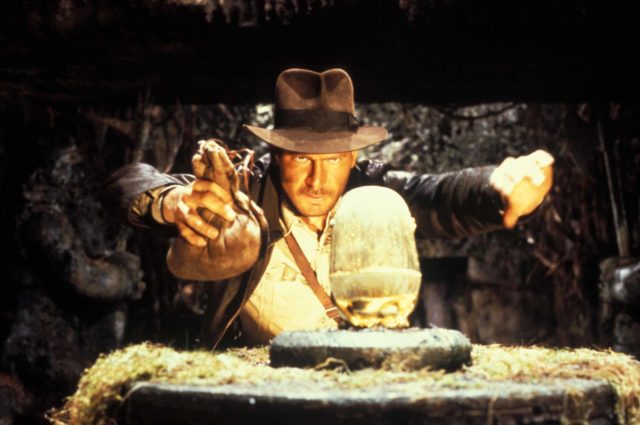 George Lucas was heavily involved in both the Star Wars and Indiana Jones franchises, so it made sense to include a cheeky in-joke during Raiders of the Lost Ark – C-3PO and R2-D2 feature on hieroglyphs behind Harrison Ford’s whip-cracking archaeologist. Princess Leia is also featured in another scene.

Temple of Doom’s opening sequence featured “Club Obi Wan”, and during the Star Wars prequel The Phantom Menace was released, Indy cropped up during a crowd sequence. 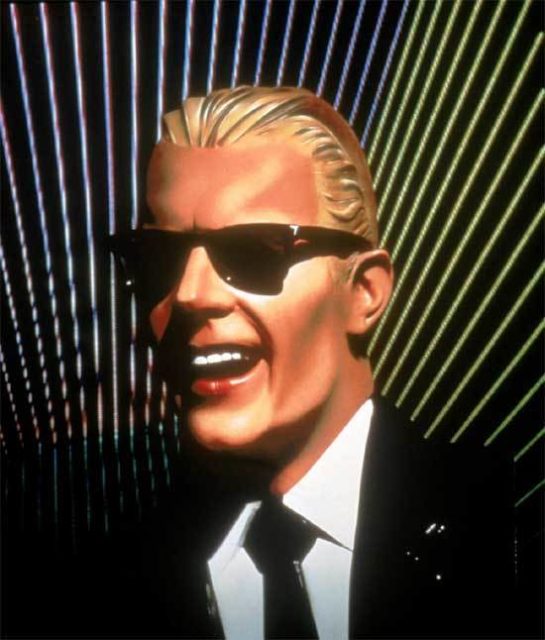 Max Headroom was truly a man of the future during the 1980s. However, the lead actor played his role in a very traditional style. History Daily writes that FX teams achieved the Headroom look “by encasing actor Matt Frewer in a stiff suit-and-tie shell and applying makeup to make his skin look all smooth and plasticky.”

A similar approach was taken to the TV adaptation of Hitchhiker’s Guide to the Galaxy. What seemed like a state-of-the-art computerized guide was, in fact, old-school cel animation. 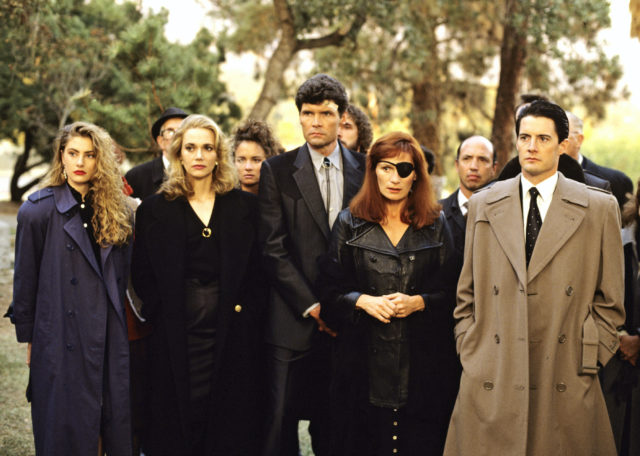 Spoiler Alert: Laura’s father Leland was revealed as the murderer in season two, albeit possessed by Killer Bob. Creators David Lynch and Mark Frost reluctantly unmasked him at the network’s request. To keep potential snoopers on their toes, Lynch shot three versions of the big scene. One with Leland, one with Killer Bob and the last with Benjamin Horne. 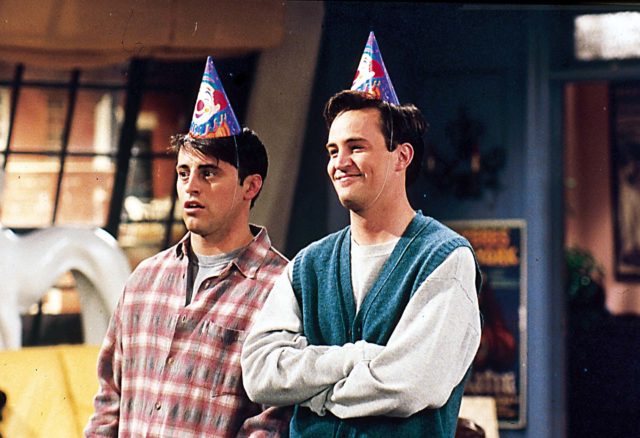 Friends was the defining sitcom hit of the 1990s and early 2000s. Time enough for people to get a little bored, perhaps? Mental Floss notes the ever-changing Magna Doodle in Joey and Chandler’s apartment. They write that an on-set electrician “began changing the drawing on the magnetic surface for each episode.”

More from us: We Only See These Historical Figures as Old – Here’s How They Looked When They Were Young

They add that, “sometimes the message related to the episode,” such as a “thank you” from the burglars that turned over their place in the Season four episode, The One with the Cat!