These Giants of Photography Stood Tall in More Ways Than One

The 20th century was a bold new era. Yet by today’s standards it fell short. Or should we say tall?

Naturally, people of extraordinary height drew much attention. And two brothers in particular found themselves in the spotlight. Then there’s the case of the “dwarf” they were snapped with. He has his own incredible story.

Read on to discover the truth behind some tall, and not so tall, tales.

Battista (or Baptiste) Hugo and Antoine Hugo were born 11 years apart in the late 1880s. According to TheTallestMan.com, the brothers entered the world in Vinadio, a village in the Italian mountains. Their nickname became The Giants of the Alps.

British Pathé writes that Baptiste reached a height of 7ft 6.5 inches. Antoine was just under at 7’5. 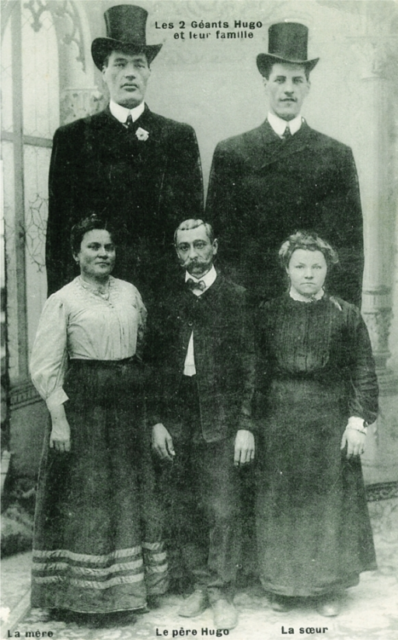 Various sources talk about the pair, though the truth about them is elusive. How come? Sadly, their background was promoted by a gentleman named Marechal, the brothers’ manager. He reportedly preferred creativity to the truth. A story about Baptiste and Antoine being twins is apparently untrue. Indeed, as British Pathé notes, they were two of seven offspring.

One thing that is documented and verified was the Hugos’ high-profile life, which has been captured on film many times.

The so-called “Tallest Man in the World” was often photographed

The brothers had what’s known as familial acromegaly. This disorder is typically caused by the overproduction of growth hormone from the pituitary gland. Attention focused on Baptiste, though Antoine was also familiar through photos. Over one hundred postcards bore their immense image, writes TheTallestMan.com. 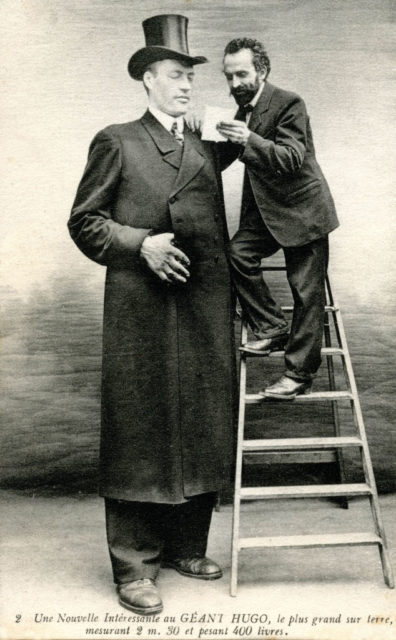 Postcard of Baptiste Hugo (1876 – 1914) (left), billed as ‘The Tallest Man in the World’ (in French), as he reads a paper held by an unidentified man on a ladder, 1900. Hugo was measured at 7 feet, 6 and a half inches tall. (Photo Credit: Rykoff Collection/Getty Images)

Baptiste’s exploits involved traveling the globe, where he attended the 1900 World Exposition in Paris. He “dressed up in a variety of costumes as ‘the giant of old Paris’ and the ‘Gargantua’ from Paris.” The Gargantua appears in a classic 16th-century text. Interestingly, he too has an accompanying giant in the family – a son named Pantagruel. It would be a few years before the first feature-length motion picture – perhaps Baptiste would have played the role on the big screen?

Showbiz beckoned over a decade later, in the form of Barnum & Bailey’s famous circus in America. Baptiste was reportedly part of a freak show. Sadly, his period at the circus was sparked by tragedy.

What happened to the Hugo Brothers?

Baptiste’s journey to the States began after Antoine passed away in 1914. There doesn’t appear to be a cause of death. Antoine was supposed to join Barnum & Baily before he died. Baptiste wanted to follow in his footsteps.

Unfortunately, he passed in 1916, at New York’s William Parker Hospital. This time the cause is recorded – diphtheria. Snopes writes that he allegedly exceeded 8 ft by that stage. Plus, there wasn’t a suitable coffin to keep him in! The cited obituary mentions Barnum & Bailey having to make “one of the biggest caskets in history.” 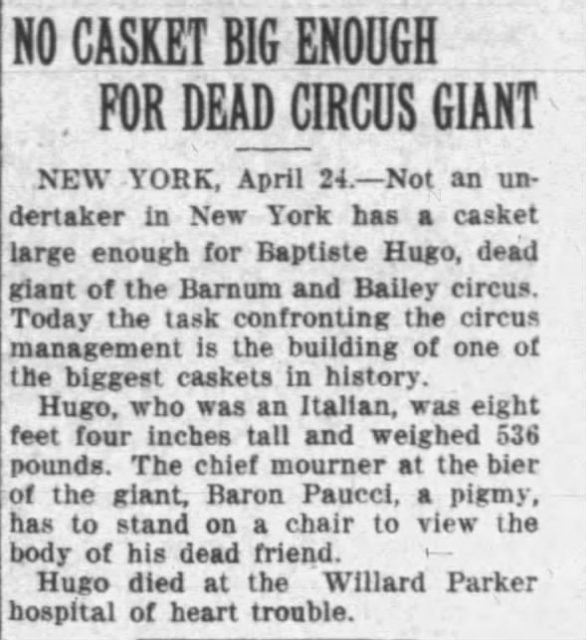 Baptiste was just shy of middle age. Antoine was approaching his thirties. Did they have any significant others? TheTallestMan.com mentions a possible union with Ella Ewing. She too was of giant stature.

Was Battista the tallest man on the planet, as has been stated? Apparently not. Feodor Machnow of Russia beat him by a matter of inches. 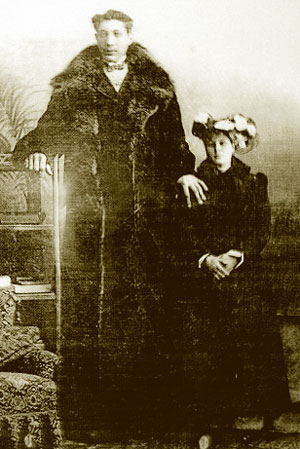 The tall yet small tale of Adam Rainer

Adam Rainer was born at the end of the 19th century, in the town of Graz, Southern Austria. He was “only 4 1/2 feet tall at the age of 19,” according to Snopes.

But that situation didn’t last. Rainer had “an unprecedented growth spurt,” meaning that he stood “more than 7 feet tall, and was classified as a giant” within a decade.

He went from dwarfism to gigantism – it’s generally believed that this makes him unique in human history. His parents were of average height, as noted by IFL Science.

Why did his stature change so dramatically? Rainer was reportedly diagnosed with acromegaly in the 1930s. A tumor putting pressure on his pituitary gland caused the sudden switch. An operation hoped to correct the issue – while the tumor came out, Rainer kept growing, though at a far slower rate.

The disorder meant that Rainer couldn’t serve in the military, as was his wish. Instead, he made his name through photographs. Here’s where a direct connection emerges between Rainer and Baptiste Hugo… mistaken identity.

Adam Rainer was born in 1899 in Austria. He holds an unusual distinction in medical history. He’s known as the only person that was both a dwarf and a giant. From birth into adulthood Rainer was always short and stood at just 3 foot 8 inches at the age of 19. pic.twitter.com/bz3dSzUpBN

Hugo was confused with Rainer in pictures, on more than one occasion (such as the image above). Others named as Rainer were not Rainer at all! Snopes did some research and established that some images in a medical journal from the 1950s are actually of Rainer. These were part of a 1961 study by one Oscar Hirsch.

He passed away aged 51. IFL Science writes that his height was just shy of 8 ft.

More from us: These Photos Really Show How Gigantic Andre the Giant Truly Was

These images only present one side of such remarkable individuals. What they were like behind the scenes is still speculated upon today.