Actors Who Nailed Their Portrayals of Iconic Vintage Hollywood Stars

The Golden Age of Hollywood was truly an era like no other. Though it has long since passed, we still can’t get enough of vintage Hollywood. As such, many modern actors and actresses have starred as some of our favorite old-school celebrities. Here we take a look at contemporary stars who transformed into Hollywood legends. 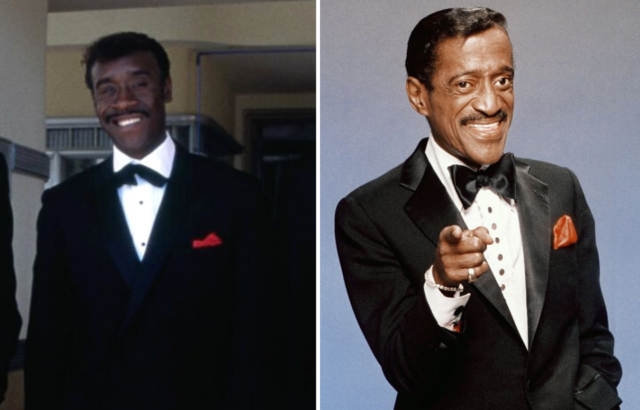 In 1998, actor Don Cheadle starred as Sammy Davis Jr. in the made-for-television film, The Rat Pack. Cheadle won a Golden Globe for his performance.

Cheadle only had a few weeks to prepare for this role. In only a couple of weeks, he learned to sing, tap dance, play the drums and trumpet, and twirl six-shooter pistols like Sammy Davis Jr. did. 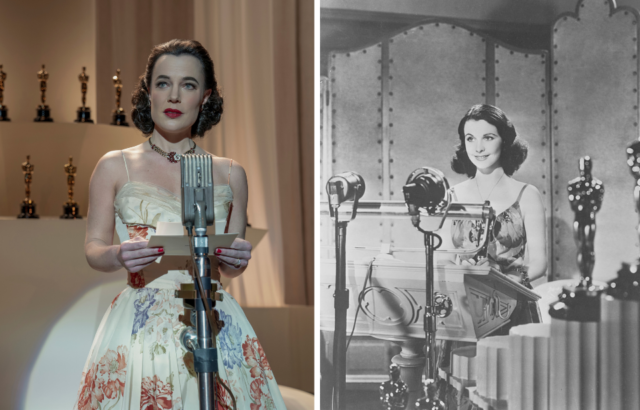 In 2020, Netflix released a miniseries called Hollywood that focused on a group of aspiring actors during Tinseltown’s Golden Age. Hollywood brought many famous figures back to life, including Anna May Wong, Hattie McDaniel, Rock Hudson, and Vivien Leigh. 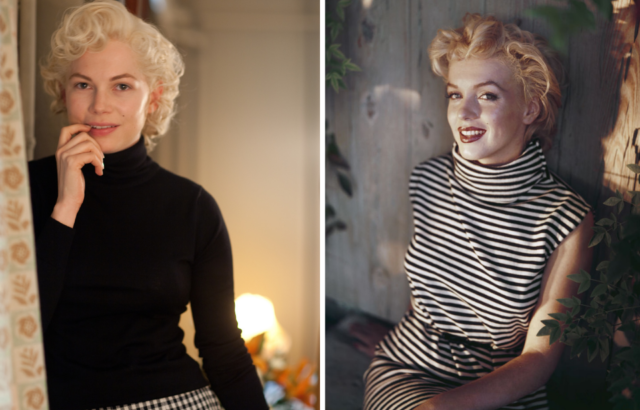 Michelle Williams truly captured the spirit of the late blonde bombshell in the 2011 movie, My Week With Marilyn. The film focuses on Marilyn Monroe during her time in England when she was filming the 1957 film, The Prince and the Showgirl.

Interestingly, Williams won a Golden Globe for Best Actress (Comedy or Musical) for her role in My Week With Marilyn. Monroe won the same award in 1960 for her role in Some Like It Hot (1959)! 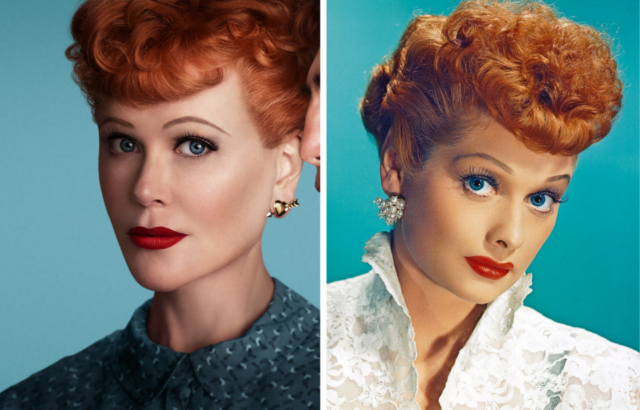 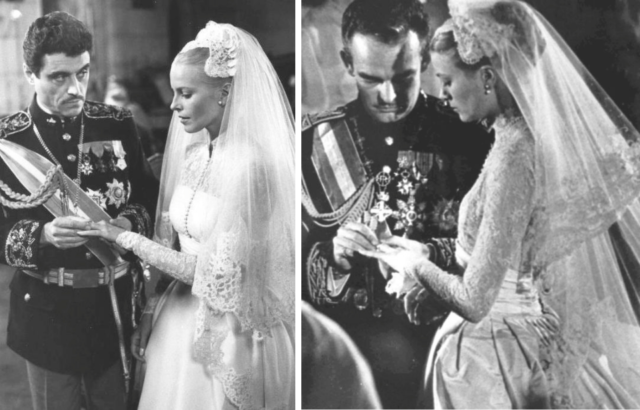 We can’t get over how similar these two shots are! The 1983 movie Grace Kelly did everything right when recreating Kelly’s wedding to Prince Rainier III. The dress actress Cheryl Lane wore as Kelly is nearly identical to Princess Grace’s real wedding dress. 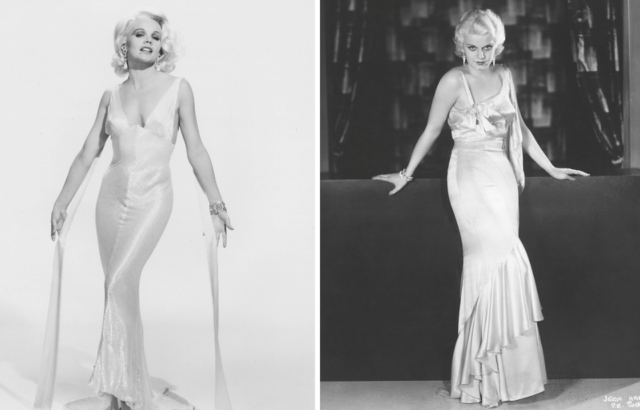 In 1965, Carroll Baker starred as the original blonde bombshell, Jean Harlow, in the movie Harlow. This movie was released after Baker played a fictional Rina Marlowe in the 1964 movie, The Carpetbaggers. It is widely believed that the character Rina Marlowe is based on the real life of Jean Harlow. 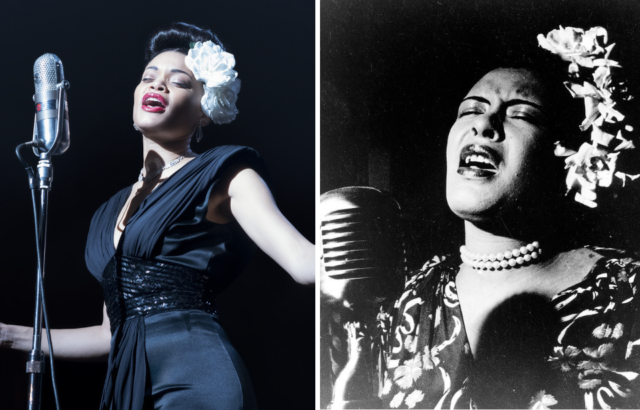 Actress Andra Day hit her portrayal of Billie Holiday out of the park. Day stars as the jazz singer in Hulu’s 2021 biopic, The United States vs. Billie Holiday. Day was initially reluctant to play Holiday. However, after accepting the role she went on to win a Golden Globe Award for Best Actress in a Motion Picture (Drama), and was nominated for Best Actress at the Academy Awards. 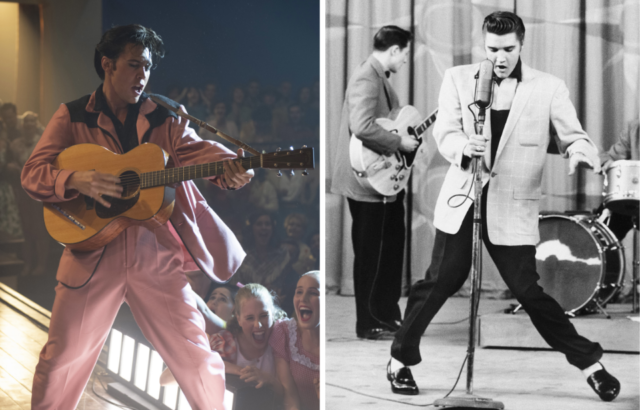 Austin Butler stars as Elvis Presley in Elvis – one of the most highly-anticipated movies of 2022. The movie is set to drop in June of this year and will cover a 20-year span of Elvis’s life, including his rise to fame and unprecedented stardom. We’ll admit that we’re all shook up at the uncanny resemblance between Butler and Presley, making us even more excited for the movie to drop! 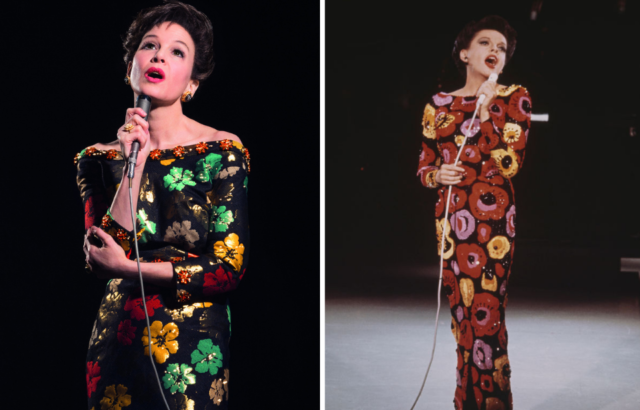 Renée Zellweger earned herself a Best Actress Academy Award for her portrayal of Judy Garland in the 2019 biopic, Judy. Though many people praised Zellweger’s portrayal of Garland, she didn’t get the support of one critical individual – Judy Garland’s daughter, Liza Minelli.

Before the movie was released, Liza Minnelli shared on Facebook that she had “never met nor spoken to Renée Zellweger,” and expressed that she had no desire to see the movie. 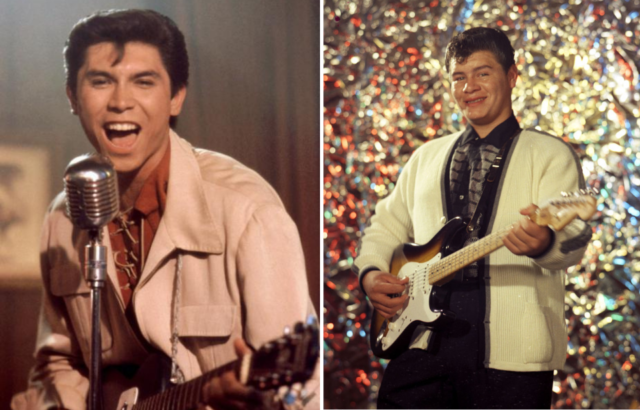 February 3, 1959, is widely regarded as “the day that music died” when singers Buddy Holly, Ritchie Valens, and “The Big Bopper” J.P. Richardson were killed in a plane crash. The 1987 film, La Bamba, follows the life and career of Ritchie Valens.

La Bamba also features the plane crash that killed Valens and the other musical icons. On the day the plane scene was set to be shot, Valens’s real family was advised not to come to set that day as the scene might be very emotional and traumatic for them to watch. 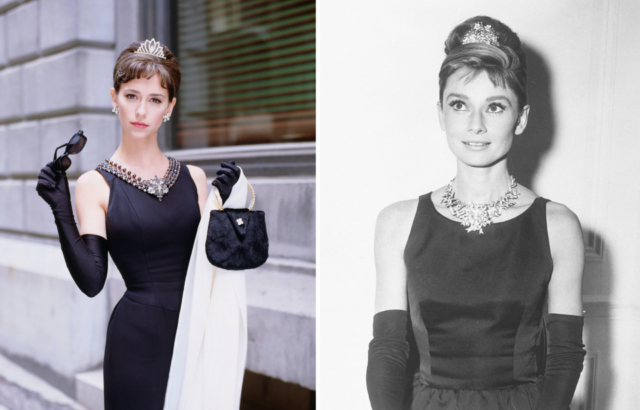 More from us: A Rare Peek at Classic Hollywood Stars at Home

Jennifer Love Hewitt looks eerily similar to actress Audrey Hepburn. Hewitt played the late starlet in the 2000 made-for-television film The Audrey Hepburn Story. The film gives the audience a look at Hepburn’s childhood during the Second World War, as well as her time as a successful Hollywood actress.

« The Tiffany Problem: When History Doesn’t Seem To Make Sense
The Search Is on for the Newest Gerber Baby »