The Ghost of Abraham Lincoln Haunts the White House

There are many ghosts that are said to haunt the walls of the White House, but none have been more witnessed by the living than Abraham Lincoln. Ever since his death, Lincoln has supposedly haunted guests of the presidential residence. It’s believed he does not do this with ill intent, but rather, he comes back to the White House when the country is in need of his help, as he wants to finish what he was not able to before his assassination.

He ‘saw’ his own death… more than once! 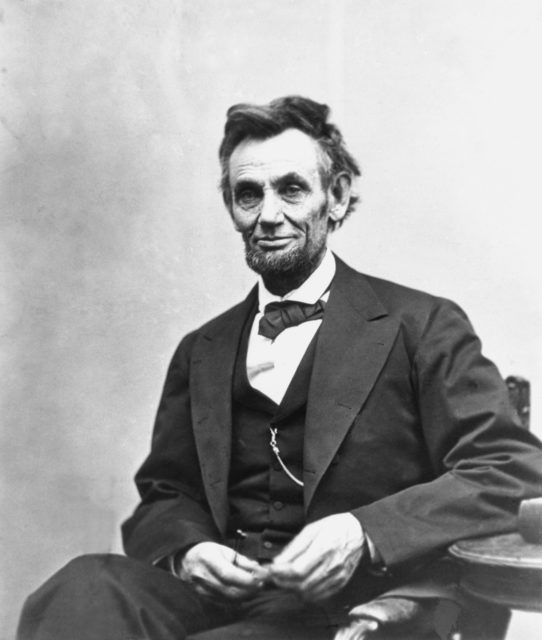 Abraham Lincoln, the 16th President of the United States, was president during the American Civil War of 1861-1865. (Photo Credit: CORBIS / Corbis / Getty Images)

It seems as though Lincoln had some sort of premonition about his future assassination. Supposedly, shortly after Lincoln was first elected as president in 1860, he had a phantasmic encounter with himself. One day, when he was looking at himself in a mirror in his Springfield, Illinois home, he saw two versions of his face in his reflection.

The one face was his as it was that day – his ‘real’ face. The other face was a pale imitation of his real one. It was gaunt and cold, almost deathly. It had ghostlike elements that made the experience even more chilling. When his wife, Mary Todd Lincoln, was called upon to look, she did not see the double reflection that her husband was describing. Mary Todd was a superstitious woman. She became concerned for her husband after she heard his account of what he saw and made a creepy prediction of her husband’s future. She believed that the two faces were a sign. For her, the ‘real’ face indicated that he would live out his first term as president. The ghostly face was an indication that he would be re-elected for a second term, but would not live to complete it. Scary accurate.

Later, on an evening in early 1865, he dreamed of his death in extreme detail. He described, “I soon began to dream. There seemed to be a deathlike stillness about me. Then I heard subdued sobs, as if a number of people were weeping. I thought I left my bed and wandered downstairs… I arrived at the East Room. Before me was a catafalque, on which rested a corpse wrapped in funeral vestments. Around it were stationed soldiers who were acting as guards; and there was a throng of people, some gazing mournfully upon the corpse, whose face covered, others weeping pitifully. ‘Who is dead in the White House?’ I demanded of one of the soldiers. ‘The President,’ was his answer. ‘He was killed by an assassin.’”

Abraham Lincoln was shot in the head by John Wilkes Booth on April 14, 1865. He died the next day.

Even Lincoln saw a ghost in the White House 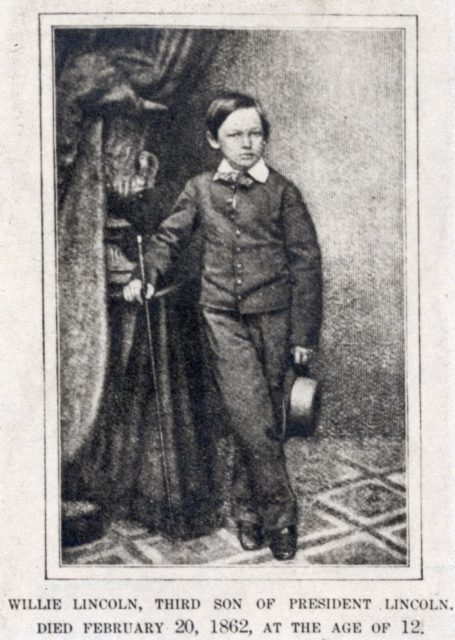 Before his assassination, Lincoln had experienced his own White House ghost encounters. His son, Willie, had died from what was likely typhoid fever in 1862 at the age of 11. It absolutely devastated both the President and his wife. Willie’s ghost supposedly paid many visits to his father at the White House, and Mary Todd had also experienced encounters with her deceased son. Following her son’s death, Mary Todd stayed in her room and mourned his death for approximately a week, never leaving. She reported that during that time, she once saw her son standing at the foot of her bed. 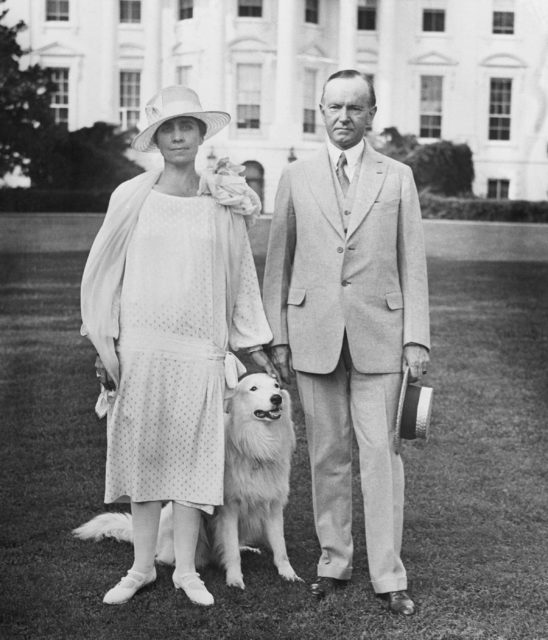 President Calvin Coolidge, with his wife Grace, stand out front of the White House upon their return from vacation. (Photo Credit: Bettmann / Getty Images)

First Lady Grace Coolidge was the first to say she had spotted Lincoln’s ghost. She claims that she saw the former president standing, looking out a window of the Oval Office. Supposedly, his hands were held behind his back and while he was standing there, looking out past the Potomac. Many say that he was looking out the window to watch over the former Civil War battlefields just beyond the river. 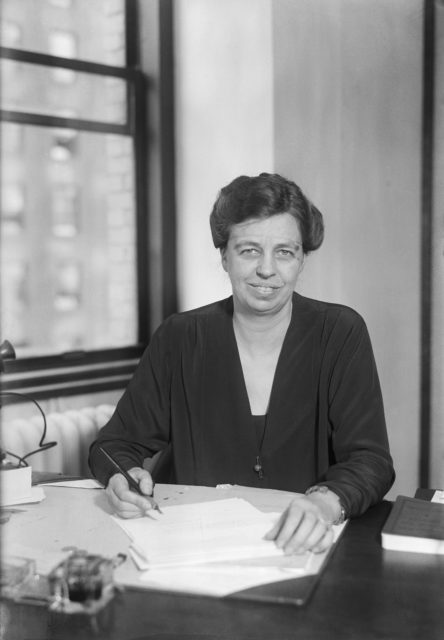 Originally called the Blue Bedroom, Lincoln’s study was renamed after numerous sitings of his ghost were witnessed there. Eleanor Roosevelt was one of those to experience Lincoln’s ghost here. She said that nearly every time she worked in the Lincoln Bedroom, she would feel another presence in the room with her. She claimed she could particularly notice the presence when she worked there late at night, and was convinced it was Lincoln joining her in his previous study. She often felt like he was peering over her shoulder. 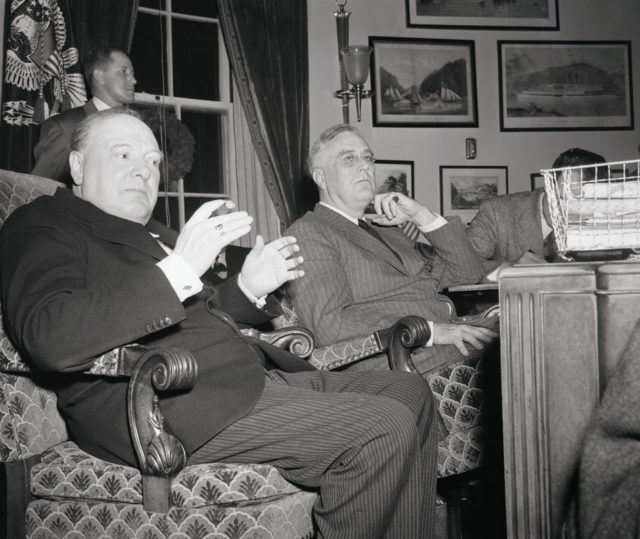 Winston Churchill visited the White House many times during President Franklin D. Roosevelt’s time in office, and on one particular occasion, Eleanor had planned for him to stay in the Lincoln Bedroom. He didn’t like the bed, and so he chose to sleep in the Rose Suite instead. However, he used the Lincoln Bedroom’s bathroom to wash up, meeting Lincoln’s ghost in a less-than-decent manner.

Churchill had just come out of his evening bath, wearing nothing but a cigar in his mouth, when he noticed the former president’s ghost sitting in front of the room’s fireplace. Supposedly, Churchill had spoken to the apparition, saying, “Good evening, Mr. President… You seem to have me at a disadvantage.” Legend says Lincoln’s ghost chuckled and then faded away. 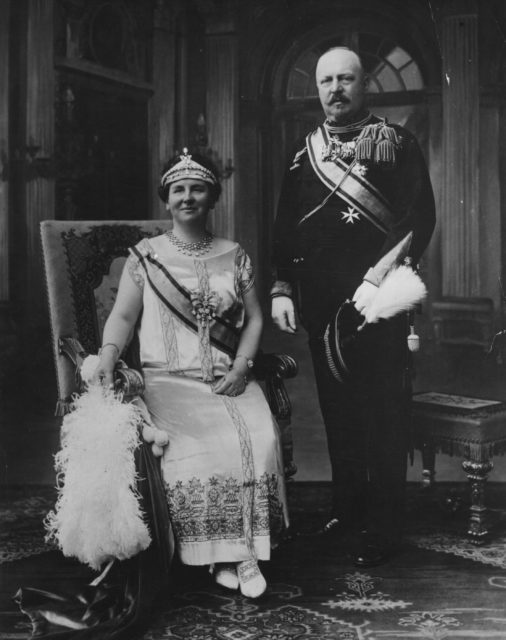 When Queen Wilhelmina of the Netherlands visited the White House, she was greeted by the former president’s ghost as well. She was sleeping in the Lincoln Bedroom when she heard a knock at the door in the middle of the night. Wondering if perhaps it was an important message, she went to go and see who it was. When she opened the door, she saw Lincoln’s ghost standing in front of her, wearing his top hat and all. Shocked, she fainted on the spot. When she finally came too, his ghost was gone. 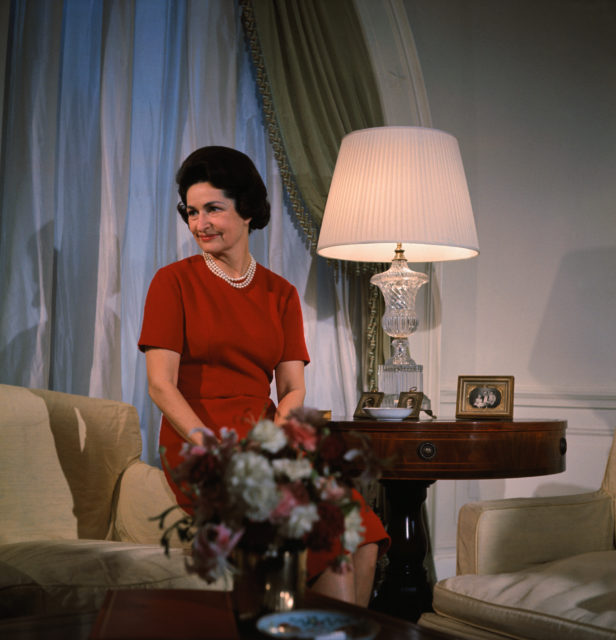 More from us: Abraham Lincoln Was Once a National Wrestling Champion Who Only Lost One Match in His Entire Career

First Lady Lady Bird Johnson was watching a television program covering the death of President Lincoln when she had her phantasmic experience. While watching the program, a plaque on the wall caught her eye. She had never noticed this plaque before, and so she went to investigate it. When she read it, it described Lincoln’s time in the room, and she very quickly felt a wave of coldness and uneasiness wash over her.