George Washington was the first president of the United States. He was also the first dead president of the United States. When he died, he wanted to be buried in a new crypt on his property, Mount Vernon. Congress had other plans. For decades after his death, his body sat in a tomb he did not desire, and it took an attempted grave robbery to finally get Washington’s body to its permanent resting place. 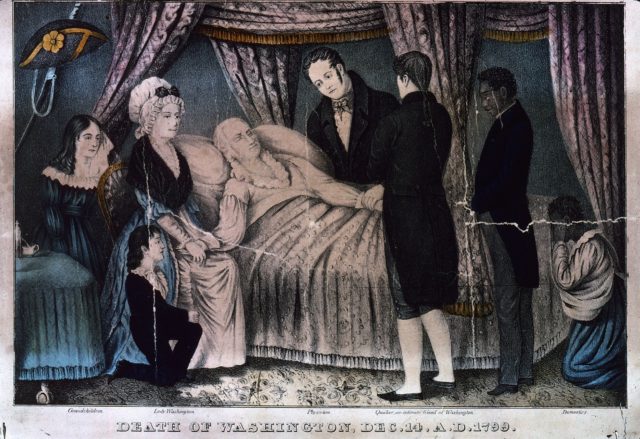 The 1st President of the Unites States, George Washington, on his deathbed surrounded by family, friends, and his wife, commonly known as Lady Washington on 14th December 1799. (Photo Credit: MPI / Getty Images)

Washington had always loved his Mount Vernon estate. The property was approximately 8,000 acres with wheat and corn fields, livestock, a beautiful garden, and the largest whiskey distillery in America at the time. It was the perfect place for Washington’s body to be laid to rest. Despite the shambles that the current vault on the property was in, he made his desire to be buried there clear in his will.

His will said, “The family Vault at Mount Vernon requiring repairs, and being improperly situated besides, I desire that a new one of Brick, and upon a larger Scale, may be built at the foot of what is commonly called the Vineyard Inclosure, on the ground which is marked out. In which my remains, with those of my deceased relatives (now in the old Vault) and such others of my family as may chuse to be entombed there, may be deposited.”

Believing that the construction of a new vault would begin soon, Washington hoped it would be bigger and better suited to house his tomb and that of his family members.

Intended construction of the US Capitol 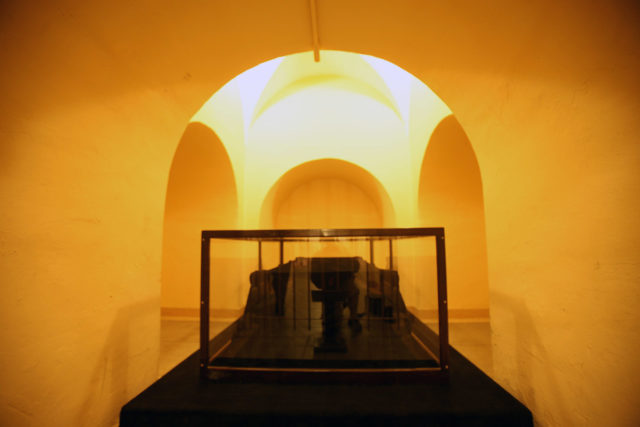 The Historic Catafalque, a tomb that was originally designed to house the body of George Washington, which has held the caskets of Presidents lying in state in the U.S. Capitol since President Abraham Lincoln sits in the crypt of the Capitol. (Photo Credit: Dennis Brack / Bloomberg / Getty Images)

Congress had other plans for the resting place of the first dead president. Instead of Mount Vernon, Congress wanted to construct a tomb in the US Capitol building, which was being built at the time of his death in 1799. Despite his will, architects began designing the Crypt shortly after his death.

The original design of the rotunda included a glass floor that would showcase the Crypt located two floors directly beneath it. However, issues over the design of the Crypt and the cost of the tomb, as well as many other outside factors, caused the project to be delayed for several decades. As such, Washington’s body was temporarily housed in the tomb in Mount Vernon.

Off (with the wrong head) 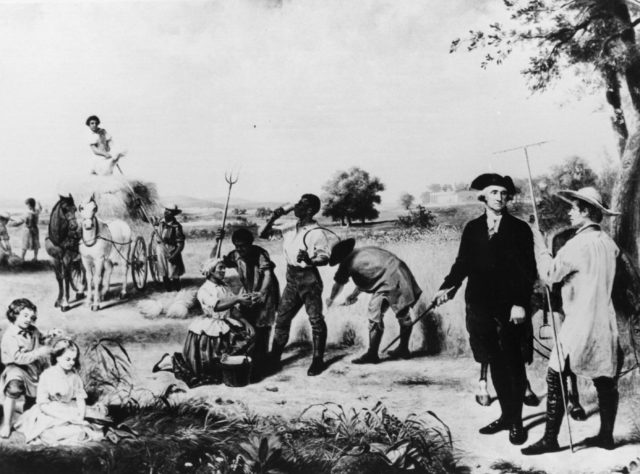 George Washington, the 1st President of the United States at Mount Vernon farm on the Potomac where he grew up, farmed and finally died. (Photo Credit: Three Lions / Getty Images)

By 1830, Mount Vernon was being managed John Augustine Washington II, the former president’s grandnephew. Mount Vernon had groundskeeping employees, one of whom was fired by John during that year. Seeking revenge, the ex-employee made the decision to attempt to steal George Washington’s skull from his temporary crypt at Mount Vernon.

As mentioned before, the crypt was decaying rapidly, and it also sat unguarded. The ex-employee had no problem entering. When he got inside, the coffins of multiple Washington family members were before him. He broke into one, severed the skull from the rest of the body, and ran off with it into the night. He probably thought the plan had gone off without a hitch… except it was not Washington’s skull he had stolen – it was that of one of his nephews-in-law, named Blackburn. 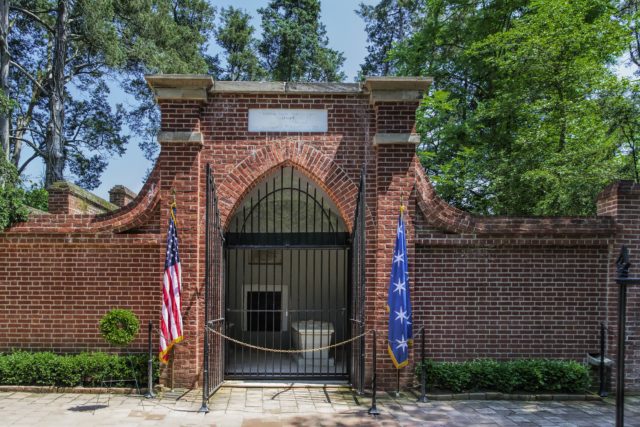 The attempted robbery opened John’s eyes to the insecurity of the current crypt, and he began planning for a new tomb immediately. At the same time, Congress had been putting pressure to have Washington’s body moved to the designated Crypt at the US Capitol building, where it would be safe from grave robbers. Washington’s wife, Martha, had even consented to the notion of burying his body at the US Capitol building despite his wishes outlined in his will.

John denied Congress from taking Washington to the new tomb, and instead constructed a beautiful new tomb at Mount Vernon, which has remained his final resting place. He even had a new sarcophagus sculpted from marble which was exceptionally strong and sturdy. Martha was also buried in a less ornate marble sarcophagus at Mount Vernon, next to her husband.

The Crypt at the US Capitol was instead used to store and exhibit the Lincoln Catafalque.

« The Un-Happiest Place on Earth? 10 Little-Known Secrets About Disney Theme Parks
Toxic Substances That Were Used as Medicine in the Past »