Frank Costello: The Infamous Mob Boss Who Inspired ‘The Godfather’

Infamous New York mob boss Frank Costello survived gang wars, government investigations, and even a shot to the head – but he never carried a gun. Despite orchestrating an overwhelming number of crimes on a local and national level, he died a free man at 82 years old.

Costello, otherwise known as “Prime Minister,” was one of the most successful mobsters of all time.  In fact, he inspired the Godfather himself, Don Vito Corleone.

Frank Costello was born to be a boss

Born in Calabria, Italy in 1891 as Francesco Castiglia, Frank Costello and his family immigrated to the United States in 1895 and settled in Manhattan. Costello’s brother introduced him to the Five Points Gang at an early age, where he quickly racked up arrests for assault, robbery, and four counts of weapons possession in a span of just ten years. 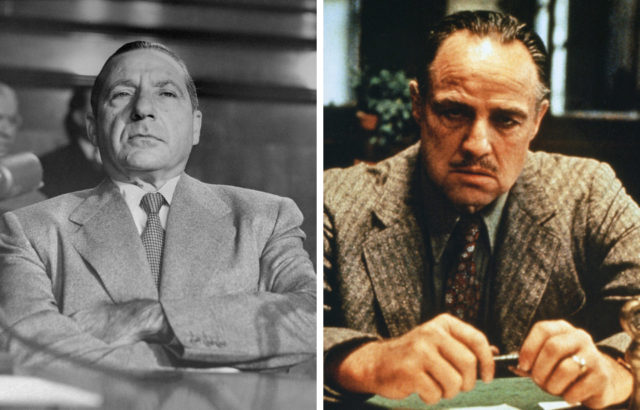 In 1918, Costello married Lauretta Giegerman and vowed never to carry a gun again. Throughout the early 1920s, Costello was involved with the Morello gang and worked alongside iconic mobsters like Benjamin “Bugsy” Siegel, Dutch Schultz, and Lucky Luciano selling bootlegged alcohol during Prohibition.

Operating under Joe “The Boss” Masseria, he worked alongside rum-running Irish gangs with fellow mobster Bill Dwyer, which inspired him to change his surname to the more Celtic-sounding Costello. The Irish and Italian gangs formed an alliance called the Combine, which controlled a fleet of ships capable of transporting over 20,000 crates of bootlegged liquor at a time.

Their success was mostly due to the several U.S. Coast Guards that were bribed to overlook the illegal shipments, but eventually, the law caught up to them. Dwyer and Costello were charged with importing liquor to New York City docks in 1926, but a deadlocked jury ultimately dropped the charges against Costello. Dwyer wasn’t as lucky, he was convicted of bribing an officer of the U.S. Coast Guard and was sent to jail. 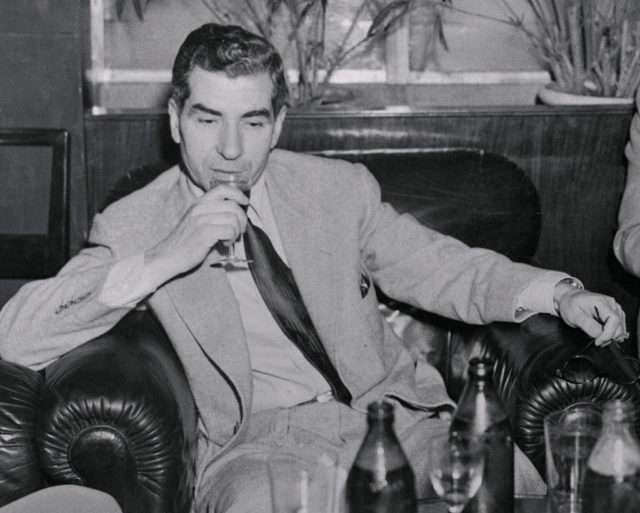 Costello took over as boss of the Combine operation, but Dwyer’s men didn’t get along with their new leader – triggering what is known as the Manhattan Beer Wars. Even though Costello lost business in the conflict, his status as a powerful boss began to grow.

By 1929, turf wars increased as more groups sought to control the highly profitable liquor, gambling, and prostitution rackets of New York. Around this time Masseria, or “The Boss,” launched a bloody, full-scale attack on Sicilian mobster Salvatore Maranzano. The conflict, known as the Castellamarese War, began when Masseria believed he was entitled to a dictatorship over the local Mafia families. 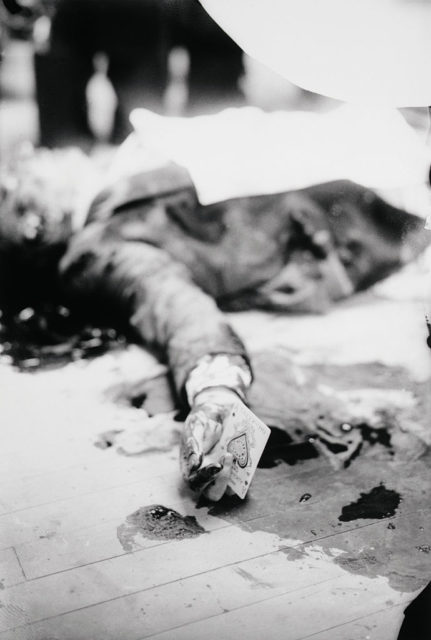 The body of underworld kingpin Joe “The Boss” Masseria. He holds a playing card in his hand, as he was murdered while playing pinochle in a restaurant. (Photo Credit: Bettmann / Getty Images)

Not long after, Joe Masseria was shot to death in a Coney Island restaurant, a single ace of spades card – or as the Mafia calls it, the “death card,” was found placed in his hand by the killer. With the turf war officially over, Lucky Luciano oversaw the assassination of Maranzano in 1931, making him the leader of the most powerful organized crime syndicate in Manhattan, and Costello his top advisor.

Under Luciano, Costello helped to expand operations into illegal gambling in Florida and Cuba as well as illicit slot machine deals with the Governor of Louisiana, Huey Long. Unfortunately, the slot machines were less popular with New York politicians like Mayor Fiorello La Guardia, who dumped all of Costello’s slot machines into the Hudson River.

By growing their operations nationally and internationally, Costello insured that the money would continue to flow even after Prohibition ended in 1933. 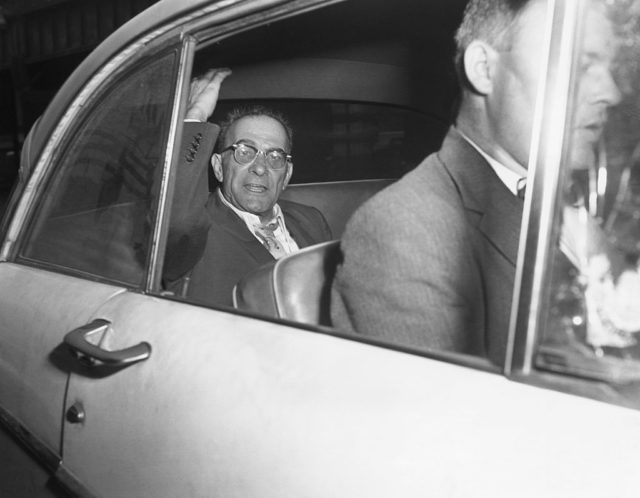 In 1936, Luciano was sentenced to 30 to 50 years in jail for extortion and prostitution. His successor, Vito Genovese, was also indicted a year later and fled to Italy, leaving Costello in charge of one of the largest gangs in America.

Costello was a businessman just as much as he was a gangster. Under his leadership, the Commission, the governing body of the Mafia, expanded into legitimate businesses like meat packing. He was known for building connections with politicians, policemen, judges, and anyone else who could be of use to the mob.

Costello’s connections earned him the nickname “Prime Minister of the Underworld.” With the huge success of his gambling ventures in Florida and Cuba, Costello soon became one of the wealthiest Mafia members in the nation. But even though his political affiliations afforded him some protection, Costello would eventually be thrust into a federal controversy that threatened his livelihood and his freedom.

In 1950, the United States Senate launched a year-long investigation into organized crime activities throughout America, led by Senator Estes Kefauver of Tennessee. During his investigation, Kefauver interviewed 600 gangsters, pimps, lawyers, and bookkeepers who worked for the Mafia in hopes of exposing the corruption of both criminals and public institutions. 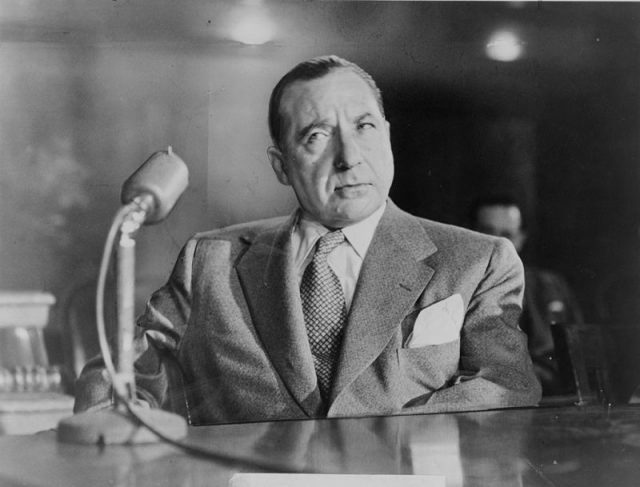 The same men were brought before the Senate – and before national TV cameras – to testify to their own experiences with organized crime. Considered the most widely viewed congressional investigation in U.S. history, an estimated 30 million Americans tuned in to watch the proceedings live in March 1951.

In fact, the hearings enthralled the nation so much that schools closed so students could watch the proceedings at home. Blood banks even began running low on donations – forcing one Brooklyn clinic to install a TV to boost donations!

If the Kefauver hearings were the event of the year, then Costello’s testimony was the headliner. Appearing before the committee in New York, Costello was impeccably dressed in a tailored suit styled with wide lapels and slicked-back hair – a style that came to embody the dress of the American gangster, personified in films like The Godfather (1972). 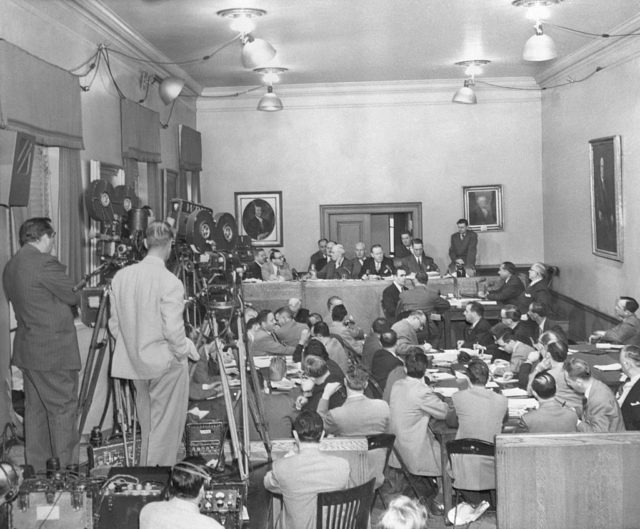 Costello was the only mobster who agreed to testify during the hearings, refusing to take the Fifth. The cameras focused intently on his hands, which were “twisted and clenched… revealing [his] inner fears and confusion.” Originally hoping the testimony would help viewers see he was just like a regular businessman, Costello became restless and angry when the questioning wasn’t going his way.

The kingpin became belligerent and frustrated. When the committee asked, “What have you done for your country, Mr. Costello?” he angrily replied, “Paid my tax!” The audience laughed, and Costello left the stand without being dismissed. He was cited for contempt of court and served several months in jail.

Costello spent the next several years in and out of jail for various crimes, and the sensitive information he divulged in the hearings made him the number one Mafia target. The drama would come to a boiling point in May of 1957 when Costello was shot in the head by an assassin. Miraculously, he survived the attempt on his life – and it was all thanks to the man who pointed the gun! 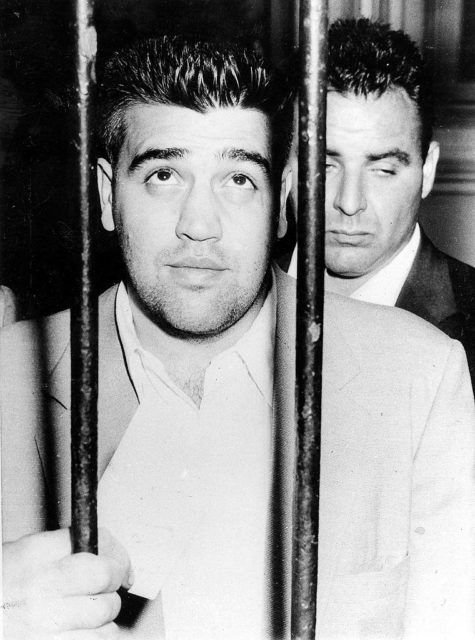 Vincent Gigante, otherwise known as “The Chin,” shouted “This is for you, Frank” as he fired his gun from a passing car. Turning his head in response to Gigante’s comment, the bullet grazed Costello’s head.

The assassination attempt was an eye-opening experience for the mobster. Rather than retaliate, Costello made amends with Gigante and the man who organized the assassination: Vito Genovese. Costello surrendered control of his gang to Genovese and retired in peace. He received frequent visits at his Waldorf Astoria penthouse from fellow gangsters looking for his sage advice. 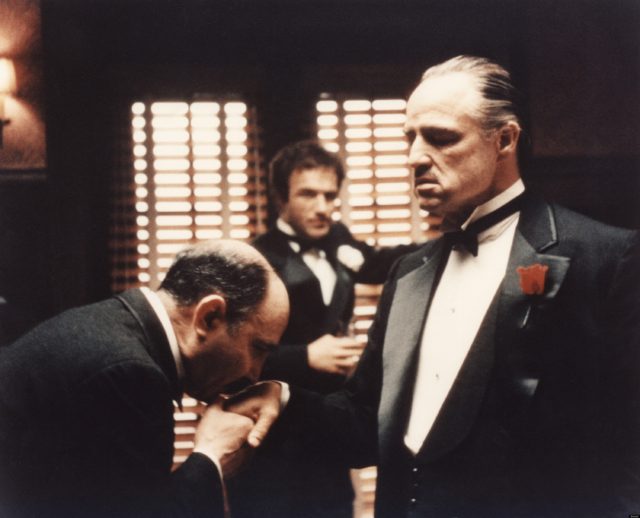 Costello died from a heart attack on February 18, 1973. Today, his legacy lives on in one of the most famous characters of all time: “The Godfather” Vito Corleone. Marlon Brando viewed footage of Costello’s appearance at the Kefauver hearings and used the mobster’s demeanor and voice for his film character.

More from us: Who Was Mae Capone, the Wife Of Mobster Al Capone?

Like Costello, Godfather frontman Corleone uses his diplomatic relationships with businessmen and politicians to solidify his power. His opposition to getting involved with the burgeoning drug trade was also a trait shared by Costello who preferred to focus on his illegal gambling operations.