A recently “discovered” photo has surfaced claiming to depict Abraham Lincoln on his deathbed has taken the history world by storm.  Supposedly taken just hours after Lincoln was shot by John Wilkes Booth, the death photo has historians divided over its authenticity. Is it a priceless artifact or a hoax?

The Death of Abraham Lincoln

On April 14, 1865, the 16th president of the United States, Abraham Lincoln, was fatally shot by a well-known stage actor, John Wilkes Booth, while attending a play at Washington D.C.’s Ford’s Theatre. Lincoln succumbed to his injuries and was pronounced dead in his bed at 7:22 am the following day. The horrendous attack came just five days after Confederate General Robert E. Lee surrendered his army and ended the American Civil War. 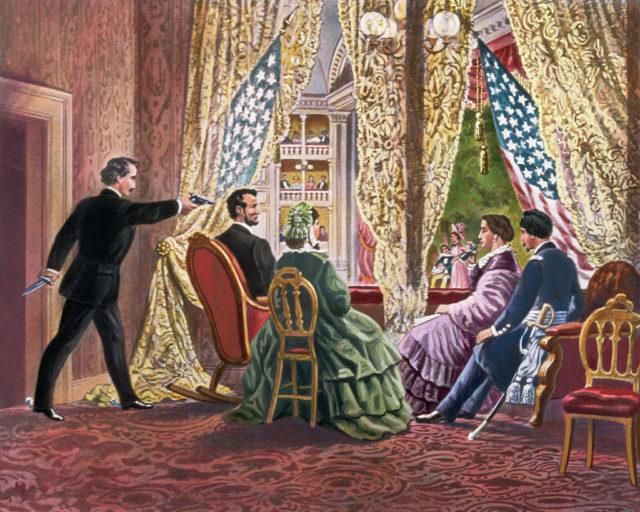 Lincoln’s assassin, John Wilkes Booth, was born into a family of prominent Shakespearean actors in 1838. A Confederate sympathizer, Booth chose to remain in the Northern states to pursue his acting career rather than join the cause in the South. Booth and a friend hatched a plan to influence the war another way: to capture the president and take him to the capital of the South in Richmond, Virginia.

On the day of the kidnapping, Lincoln failed to show up at the spot where Booth and his conspirators were waiting. They abandoned their plan, and within two weeks the Civil War had effectively ended with the surrender of General Lee. In a last-ditch effort to save the Confederacy, Booth hatched a new plan to kill the president. 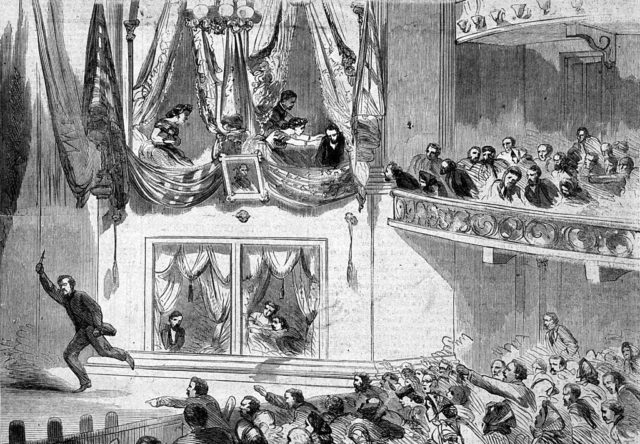 A drawing of the chaos that unfolded after the assassination of Abraham Lincoln. (Photo Credit: MPI / Getty Images)

At 10:15 pm, Booth slipped into Lincoln’s box at the Ford Theater and proclaimed “Sic semper tyrannis!” (“Thus ever to tyrants!”—the Virginia state motto) before shooting him with a .44 caliber pistol.

As the first US president to ever be assassinated, Lincoln’s death shocked the nation and triggered a lengthy mourning period. Lincoln made monumental changes to his country while in office, ending slavery and working to create a more just society for all Americans. His death occurred near the end of the American Civil War, a conflict that had divided the country into the Northern Union and Southern Confederacy and which Booth hoped to revive by killing the president.

If the Abraham Lincoln death photo in question is real, it would have been taken sometime between 10:25 pm on April 14th and 7:22 am on April 15 – and if it was truly real, why did no one know about its existence until 155 years after Lincoln’s death?

Who took the photo?

Before we can attempt to unravel the mysterious photo, it’s important to ask why no photos of Lincoln’s body exist in the first place.

After Lincoln died, his body was sent on a 400-stop train tour throughout the East coast of the United States before being interred in Springfield, Illinois. While the president’s wife, Mary Lincoln, disagreed with the funeral tour, she was promised one thing: photography was strictly forbidden.

The story claims that a photographer named Henry Ulke was responsible for taking the picture. Ulke lived in the same boarding house Lincoln was brought to after he was shot, directly across the street from Ford’s Theatre. The photographer had supposedly taken the image in secret shortly before Lincoln would be pronounced dead, and before the “no photography” rule could be put in place. 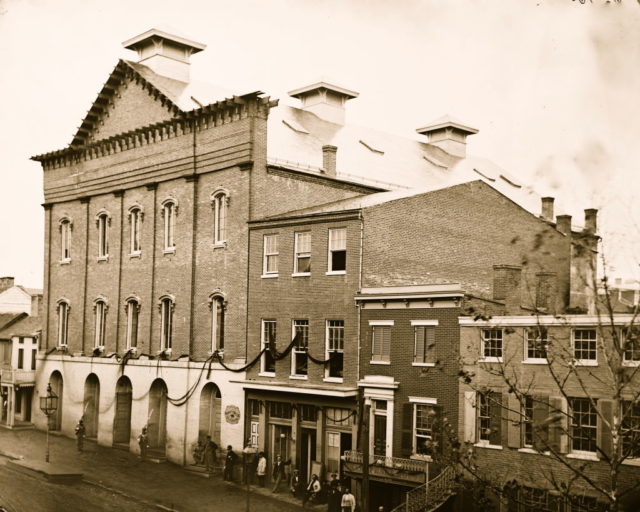 The photo was likely stopped from reaching the public eye when Lincoln’s Secretary of War Edwin Stanton declared that all images of the dead president must remain private. The photo in question was handed down to Lincoln’s mother Nancy Hanks (and yes, she is a distant cousin of actor Tom Hanks!) It was passed down through the Hanks family until a cousin, Margaret Hanks, ended up with it in the 1980s.

Before she died in 1986, Hanks sold several artifacts to a Civil War buff named Larry Davis. Davis recalled seeing the small picture, which is kept in a hinged frame finished with velvet and brass, labeled with a Post-it note that read: “Cousin Abe.” Allegedly, Davis’ wife stole the picture from him and sold it to an Illinois dentist named Jerald Spolar.

What are the experts saying?

Whitny Braun, a California investigative researcher who has spent several years looking into the authenticity of the photo, first heard about it when she received a phone call from Spolar in 2020. When Braun saw the photo with her own eyes, she was shocked that a random dentist owned what could be one of the most valuable photographs of Lincoln ever taken. 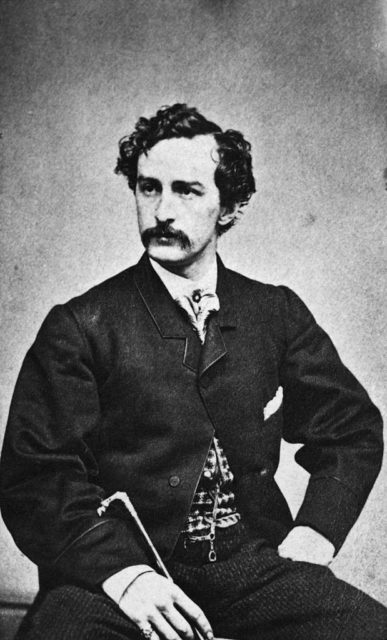 Whitny Braun also sees clues hidden in the picture that could prove its authenticity. The subject’s right eye appears to be bulging, which is consistent with a gunshot wound to the head. Braun also noted the small scar on his lip, which was a confirmed feature of Lincoln’s.

“My first thought was that it was too good to be true,” said Braun, who was featured in the documentary Undiscovered: The Lost Lincoln. Braun says she is “99 percent sure” that the photo is authentic, but several details have left other experts feeling skeptical. 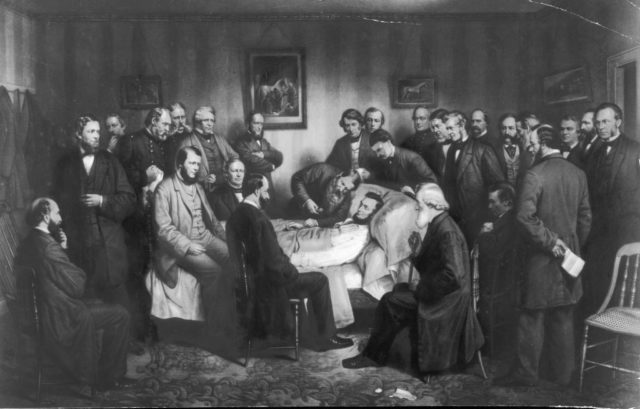 Painting of the death of President Lincoln showing his physician and other notaries, circa 1865. (Photo Credit: Fotosearch / Getty Images)

The first interesting fact about the photograph is that is an ambrotype, a picture created using a glass negative on a dark background. But the ambrotype method was outdated by the 1860s, so why would a professional photographer like Ulke use such an old and inefficient method for a secret photo?

Is the man in the death photo really Lincoln?

Harold Holzer, who has intensely studied the 130 Lincoln photos in existence for his book The Lincoln Image: Abraham Lincoln and Popular Print, is not convinced the photo is real. “Not every man with a beard photographed after 1861 was Abraham Lincoln,” he said. “It’s going to take a lot for me to take this seriously. It doesn’t scan.” 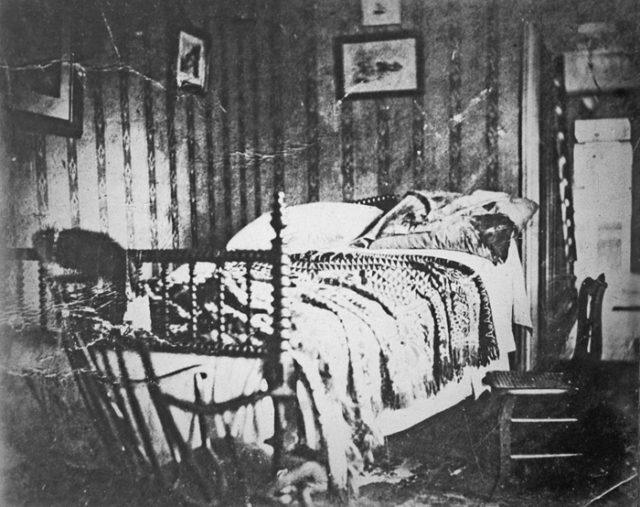 In addition to the ambrotype theory, Holzer notes that the man in the photo is wearing a shirt when history has proven that Lincoln’s clothes were taken off him once he was brought to the boarding house in order to check for any other injuries. 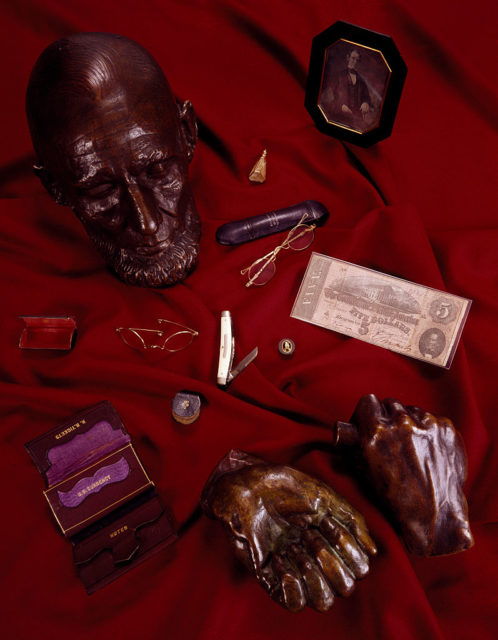 Abraham Lincoln’s death mask and what was in his pockets the night he died in 1865. (Photo Credit: Carol M. Highsmith / Buyenlarge / Getty Images)

Other details don’t seem to add up. The bed post on the left side of the image appears smooth, while the actual Lincoln deathbed in the boardinghouse is known to have rounded and grooved sides. Lincoln’s iconic facial features like his strong nose also seem to be missing from the photo in question.

Over the years other potential Lincoln death photos have been hinted at, including one stashed in a time capsule underneath the now-dismantled statue of Robert E. Lee in Richmond, Virginia. The time capsule dates back to the Civil War era and included bullets of the era, buttons, letters, and books.

Some believed the capsule could have included a rare photo of Lincoln’s body in his casket, according to newspaper accounts at the time of the capsule’s dedication in 1887. Of course, no such photo was found.
More from us: The Haunting Final Words of 15 US Presidents
Whitny Braun is still convinced the photo is the discovery of the century, “In the world of authenticating” she said, “This is like finding the Holy Grail.” As more research is needed to truly decipher the origins of the photo, only time will tell if Abraham Lincoln’s death photo is a national treasure or a convincing fraud.
« Ted Bundy and the Hillside Strangler Kenneth Bianchi Shared This One Unusual Connection
We Can’t Believe How Much Paul McCartney’s Grandson Looks Like Him »