Where Are The Stars of ‘Interview with the Vampire’ Now?

Based on the novel by Anne Rice, Interview with the Vampire tells an epic story of love, loss, and blood lust. Filmed in New Orleans, the 1994 film adaptation showcases the gothic beauty of the sets and costumes with lots of long blonde hair and French accents. The story follows 18th-century vampire Louis (Brad Pitt) who shares an account of his life with a mortal, Daniel Malloy (Christian Slater).

Louis’ 200 years of life have been plagued by solitude and betrayal, but his most horrifying challenge was the man who made him a vampire: the wealthy aristocrat Lestat de Lioncourt (Tom Cruise). The star-studded cast of Interview was dedicated to making it a success, even hanging upside down for thirty minutes at a time to encourage the look of bulging veins. Nearly three decades later, what are the actors of the iconic vampire drama up to now? 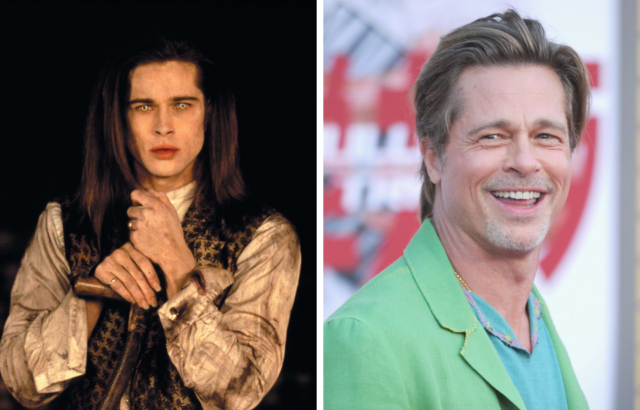 While we know him as a megastar today, Brad Pitt was still gaining traction in the acting world in 1994. Pitt plays Louis, an inconsolable man who turns to a vampire to help him die after the loss of his wife and daughter. While Brad Pitt’s role in Interview with the Vampire was originally supposed to be the main character, he was disappointed to learn that Louis’ character had been changed to stand in the shadow of Lestat (Tom Cruise).

Luckily, the slight change in plans didn’t affect Pitt’s career – in fact, it is considered his breakout role! Today, he is one of the most celebrated actors in Hollywood. From the grungy 1999 flick Fight Club to historical films like Troy (2004) and Inglourious Basterds (2009), Brad Pitt continues to act in the biggest movies. He has also won two Academy Awards, one for Best Picture for 12 Years a Slave (2013) and Best Supporting Actor in Quentin Tarantino’s Once Upon A Time in Hollywood (2019)

Beyond his acting career, Pitt is also a philanthropist who donates to and spreads awareness for organizations like One Campaign, which combats AIDS and poverty in developing countries. He also started the Jolie-Pitt Foundation in 2006 with former partner Angelina Jolie, which donated $1 million dollars each to Global Action for Children and Doctors Without Borders. 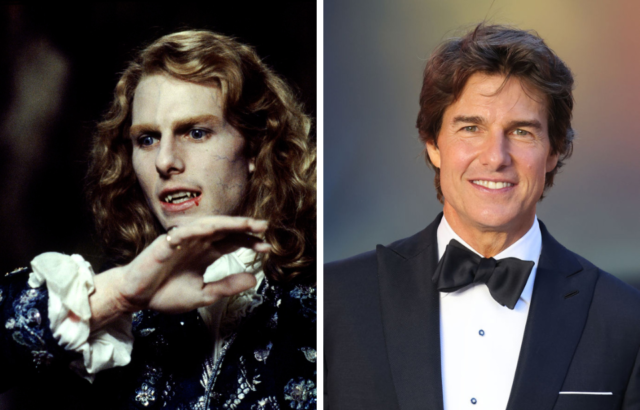 The 80’s heartthrob Tom Cruise was already an established actor when he walked on set to play Lestat de Lioncourt in Interview with the Vampire. Ditching his usual short brown hair for the long and luscious locks of Lestat de Lioncourt, Cruise’s character turns the heartbroken Louis into a vampire and his closest companion. Author and screenwriter Anne Rice originally believed that Cruise wasn’t the best choice to play Lestat, making his time on set miserable.

When Cruise got the call to play Lestat, he immediately immersed himself in the role – studying 18th century France, traveling to Versailles, and even losing 12 pounds! But none of his efforts appeased Rice, who according to Esquire thought Cruise was butchering her script and “sanitizing the sexual content to accommodate his clean-cut image.”

“When it first hit, it really hurt my feelings, to be candid about it,” said Cruise as he reflected on his experience. “Her venom hurt.” Luckily, Rice issued an apology after the film was released, saying she was impressed with Cruise’s performance.

Today, Tom Cruise is a renowned action star who pulls off outrageous stunts in films like the Mission Impossible series and the wildly successful sequel to Top Gun (1986), Top Gun: Maverick (2022). Cruise is especially passionate about stunt work and even went as far as to become an aerobatic pilot after his first Top Gun film – earning his pilot’s license in 1994. Despite his somewhat controversial membership in the Church of Scientology, Cruise is known to be one of the most well-liked stars in the acting community. 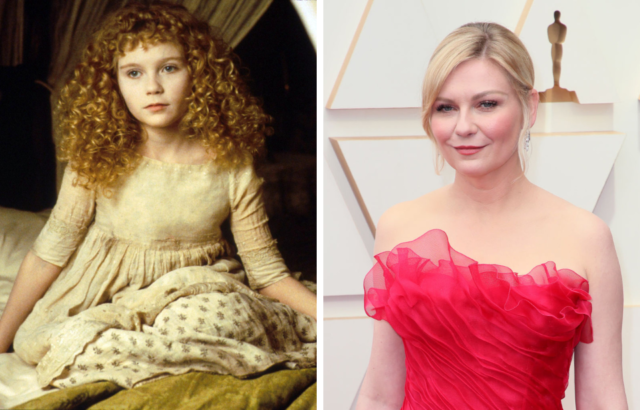 Interview with the Vampire was Kirsten Dunst’s first role in a major movie. She was just eleven years old when the film was released in 1994! Her role in Interview was so successful that she even received a Golden Globe nomination. Dunst told Stephen Colbert that she enjoyed her time on set, especially with Cruise and Pitt who treated her “like a little sister.”

There was one part of filming Dunst regrets: sharing a kiss with the much older Pitt. “I hated it so much, because, I don’t know — Brad was like my older brother on the set, and it’s kinda like kissing your brother. I don’t know,” said Dunst in a 1994 interview. “He was like — it was weird kissing an older guy, and I had to kiss him on the lips, so it was gross.” 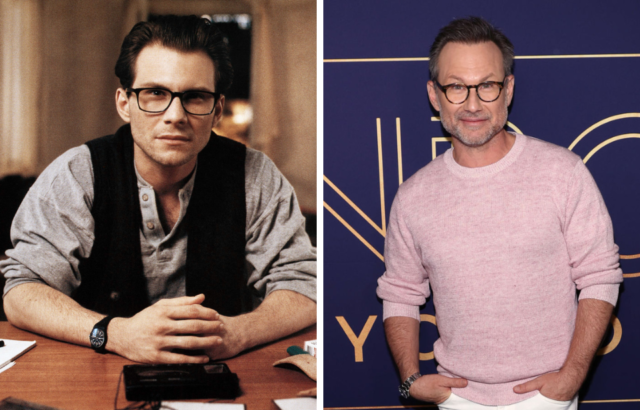 Christian Slater wasn’t the first choice to play Daniel Malloy in Interview with the Vampire! River Phoenix was set to play the role, but tragically died before filming began. Producers rushed to replace Phoenix, even looking at Leonardo DiCaprio and Stephen Dorff before settling on Slater. Slater said he felt “really awkward” taking Phoenix’s role. He later donated $250,000 he earned from the film to Phoenix’s two favorite charities.

Interview came somewhat later in Slater’s career, so he brought his experience from Heathers (1989), Robin Hood: Prince of Thieves (1991), and True Romance (1993). He later went on to star in Very Bad Things (1998) and Broken Arrow (1996). In later years he had a prolific voice-over career and also appeared in several hit television series. His title role in the show Mr. Robot (2015–2019) even won him a Golden Globe Award for Best Supporting Actor – Series, Miniseries or Television Film in 2016. 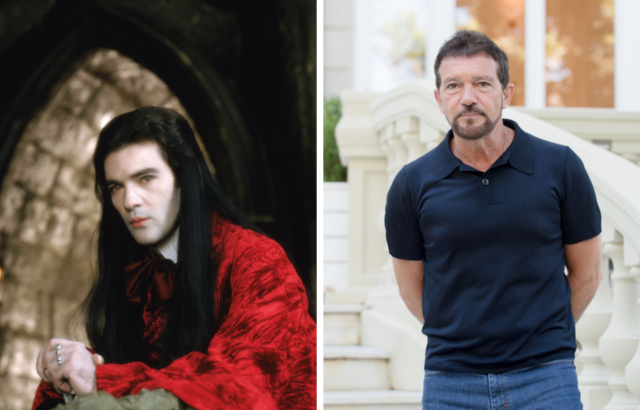 Thanks to his role in Interview with the Vampire, Antonio Banderas was able to launch his career in English films. At the time, Banderas was mainly acting in Spanish films but Interview allowed him to branch out into more mainstream projects. Just like Tom Cruise, author and screenwriter Anne Rice was doubtful of casting Banderas in the role of Armand – a 500-year-old vampire who is supposed to look like a “beautiful adolescent boy of Slavic descent.” Luckily, Rice was thrilled with Banderas’ rendition of the character.

Now, Banderas is a successful mainstream actor in Hollywood, known for films like The Mask of Zorro (1998), Evita (1996), and childhood favorites like the Shrek and Spy Kids franchises. He is also set to star alongside Harrison Ford in the fifth Indiana Jones film in 2023. 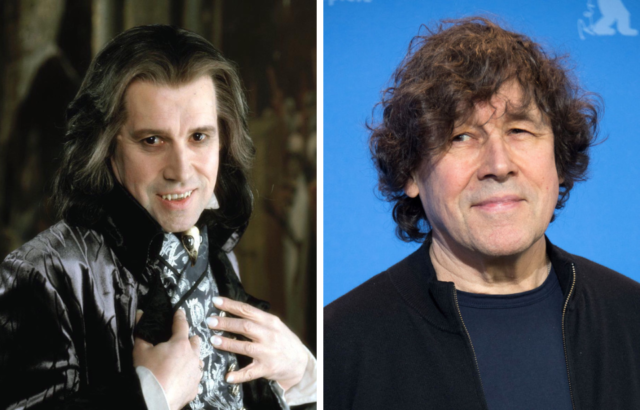 In Interview with the Vampire, Stephen Rea played the mysterious vampire Santiago, a member of a troupe of theater vampires with potentially ominous intentions. Interview was actually Rea’s second collaboration with director Neil Jordan, and he would go on to star in a total of four of Jordan’s films.

Rea later starred in films like V for Vendetta (2006), The Musketeer (2001), and Citizen X (1995). He continues to work in film and television, notably starring in the BBC thriller series The Honourable Woman.

« John Phillips: The Sordid Life of ‘The Mamas and the Papas’ Co-Founder
The Archaeologist Who Discovered King Tut’s Tomb May Have Stolen His Treasure After All »