2022 marks 100 years since the discovery of King Tutankhamen’s tomb by archaeologist Howard Carter. Throughout the last century, the incredible discovery of the “Boy King” has kept the world’s attention, because of new finds that were missed in the initial investigations and for an alleged Pharaoh’s Curse placed on those tied to the excavation.

The discovery has made headlines yet again, this time for allegations that Carter stole artifacts from the tomb. Although this is a rumor that has floated around through the years, there is now evidence that may prove it to be true.

Discovery of the tomb

Howard Carter arrived in Egypt in 1891, but didn’t begin to intensively search for King Tut’s tomb until 1917. He knew that the tombs of most pharaohs had already been discovered in the Valley of the Kings, but that Tut’s had not. Carter made it his goal to secure the discovery for himself, with the help of his benefactor, Lord Carnarvon. The early years of excavation were largely fruitless and Carnarvon decided to pull his funding at the end of the 1922 season. 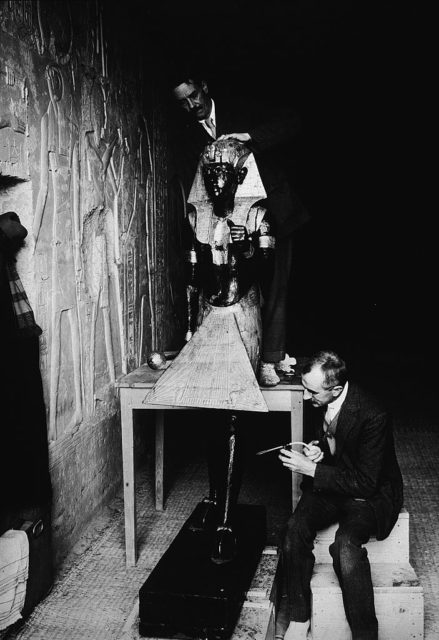 Fortunately for Carter, it was in 1922 that he finally discovered the tomb. He and his team decided to work at the base of Ramses VI’s tomb, where they found steps leading down into an undiscovered burial chamber. On November 26, 1922, Carter and Carnarvon descended the steps and entered this tomb for the first time. This one, unlike most of the other pharaohs’ tombs, remained intact.

The discovery of King Tut’s tomb was incredible, as it hadn’t been destroyed by tomb robbers like many of the others in the Valley of the Kings. Inside were well-preserved objects including the famous sarcophagus and burial mask that are most commonly associated with King Tut. One could say that the discovery of the tomb was the easy part, as what came afterward was a 10-year-long excavation. 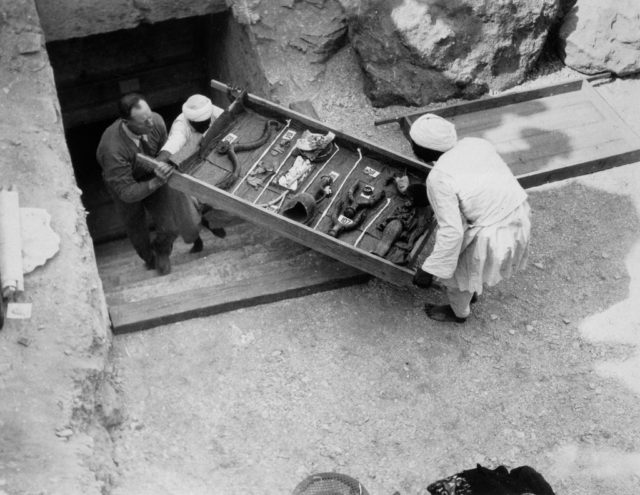 Removing a tray of chariot parts from the Tomb of Tutankhamun in the Valley of the Kings, 1922. (Photo Credit: Historica Graphica Collection/ Heritage Images/ Getty Images)

The tomb had four rooms containing various objects such as jewelry, statues, furniture, weapons, clothes, and even a chariot. They discovered and documented thousands of objects, most of which are now located in the Cairo Museum in Egypt. However, many people believe that not all of the items recovered from the tomb made it to the museum, as Carter allegedly stole some of them.

Items from Carter’s estate were eventually sold that had clearly come from the tomb. But it was difficult to prove that he had stolen them. But a new letter from 1934 has come to light which might provide the proof needed to back up the claim of theft. The letter was sent to Carter by Alan Gardiner, a member of the King Tut excavation team.

Gardiner was brought onto the team to translate the hieroglyphs found inside the tomb, and Carter gave him what was referred to in the letters as a “whm amulet,” presumably as a thank you for his work. Carter had told him that it didn’t come from King Tut’s tomb, but when Gardiner showed the amulet to the director of the Egyptian Museum in Cairo, he was informed that it indeed had. 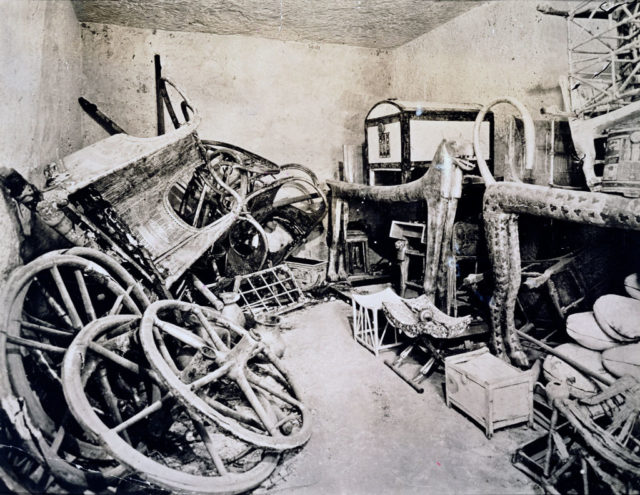 In the letter that Gardiner sent to Carter, he expressed his unhappiness about the situation: “The whm amulet you showed me has been undoubtedly stolen from the tomb of Tutankhamen,” he wrote. Gardiner also said that he regretted “having been placed in so awkward a position.”

More from us: William and Other Blue Hippos Survived From Ancient Egypt

Despite Gardiner’s displeasure, he didn’t tell anyone where the amulet came from, however, it proves that Carter did take items from the tomb, whether to keep himself or to give to others.

« Where Are The Stars of ‘Interview with the Vampire’ Now?
Arnold Schwarzenegger, With a Net Worth of $450 Million, Cut Financial Support From His Son »