William and Other Blue Hippos Survived From Ancient Egypt

Ancient Egyptians were buried with everything they would need for their journey to the afterlife. This included food, water, and of course, a blue hippopotamus. Many excavated tombs contained these small statuettes that were associated with both fertility and rebirth. Despite their small size, between nine and 23 centimeters, many of them survived the centuries and have made their way into modern museums.

These hippopotami were made with faience, a turquoise substance that was used in many ancient Egyptian objects. It was created by crushing quartz which was then glazed and fired at a low temperature. Copper or cobalt in the glaze gave it a unique blue and green color. Faience is the oldest form of glazed ceramic in existence at roughly 6,000 years old. 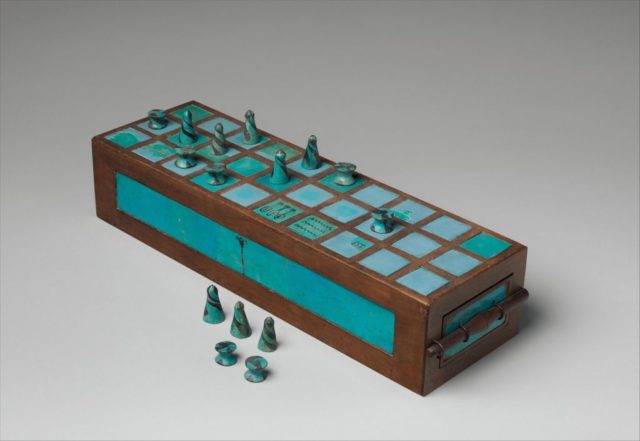 The blue hippos were created using this ceramic technique, however, they were also given additional decorations. It was common for images associated with the Nile River to be painted on their bodies as well, such as flowers, marsh grass, waterfowl, and insects. These items were selected specifically since the Nile River was a symbol of life to ancient Egyptians, as was the hippo who lived in it.

It is because of these associations that faience hippos were placed in Egyptian tombs. They were meant to give the dead regenerative power and guarantee their rebirth. Even though they were commonly used, the statues didn’t stay whole for the burial. 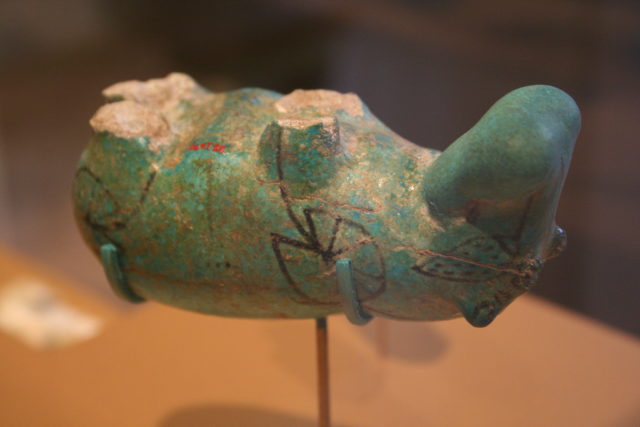 Many of the statues have their legs ritually broken so that they would be harmless in the afterlife, and not hurt the dead person that they were buried with. Despite their association with life and rebirth, real hippopotami were dangerous creatures in ancient Egypt. By breaking their legs upon burial, ancient Egyptians were ensuring the safety of the individual in the tomb while also giving them help with rebirth.

The most famous of the hippopotami is a statue located at the Metropolitan Museum of Art in New York City. William, a nickname given to the hippo by Captain H.M. Raleigh in an issue of Punch magazine, was created around 1961-1878BC. He was excavated in May 1910 from the burial chamber of Senbi II, who was a provincial governor in ancient Egypt. 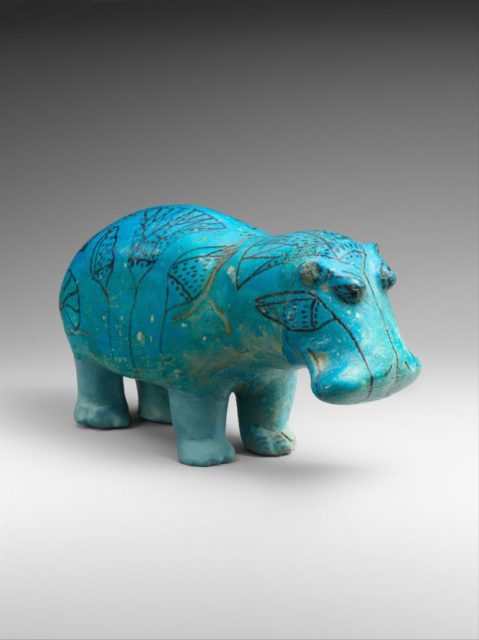 William, like many of the other statues of this kind, had three legs snapped off before being placed in the tomb, but these have since been restored by the museum. Aside from the blue glaze, William also has both open and closed lotus flowers painted on his body. The symbolism of the lotus flower was also linked with the ideas of birth, death, and rebirth, much like the hippo itself.

Hippos around the world

William is not the only hippo to survive from ancient Egypt. In fact, there are roughly 50-60 of these statuettes located around the world. Each of these hippos is designed in a similar style. They are all created with faience and have different flora and fauna painted on their bodies. Most of them also had their legs broken. However, there are some of them that stand out from the rest. 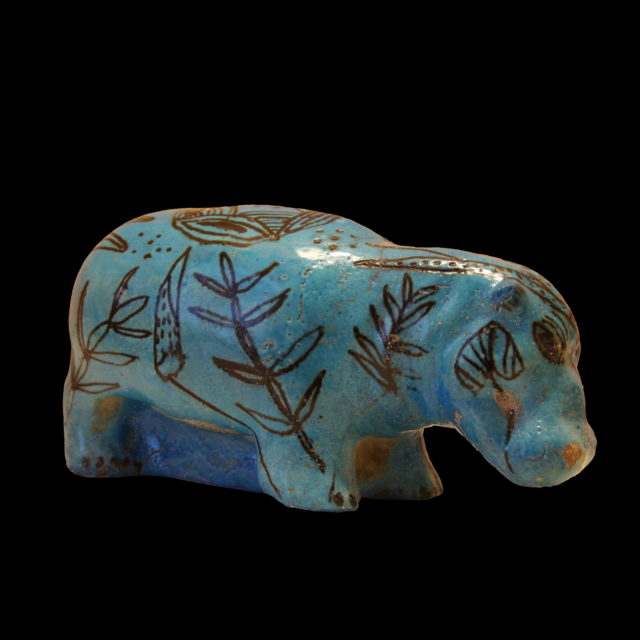 The hippo at the Louvre Museum, for example, is the only one to have all four of its legs connected by a strip of ceramic. The George Ortiz Collection contains the only hippo in existence that has both its head turned and a dragonfly on its body. There are only four other statues outside of this collection with their heads turned.

Despite the unique qualities of the other hippos, none of them are quite as popular as William, who now serves as the Metropolitan Museum of Art’s mascot.

« In Hindsight, These Vintage Scandals Weren’t All That Scandalous
Was Kurt Russell’s Connection to Elvis Presley Written in the Stars? »