Fifty Years Later, the Group Behind the Oscars Apologized to the Woman Who Refused Marlon Brando’s Award

On March 27, 1973, history was made at the Academy Awards. A Native American woman stood on the Oscars stage, facing racial slurs and gestures. She was only 26 years old, and the traumatic event would mar her acting career for good. At the time, her appearance on stage sparked a lot of controversies, but despite the implications the event had on her and her career, she “knew [she] had done the right thing.” Fifty years later, the Academy issued her a formal apology for her experience that day. 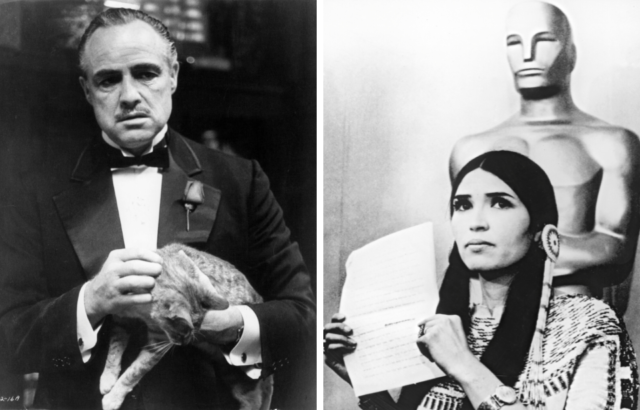 Marlon Brando played Vito Corleone in the 1973 film, The Godfather. Sacheen Littlefeather shows the speech he wrote for her in front of the enlarged Oscar Award. (Photo Credit: Paramount / Getty Images and Hulton Archive / Getty Images)

Following his iconic performance as Vito Corleone in the internationally famous 1972 Francis Ford Coppola film, The Godfather, Marlon Brando earned himself a nomination for Best Actor at the 45th Academy Awards. When the time came to announce the winner, Brando’s name came as no surprise.

What did come as a surprise was the individual who went up on stage to accept the award. A Native American woman named Sacheen Littlefeather, wearing a buckskin dress, walked on stage instead of Brando. Only she was not up there to accept the award – she was there to refuse the honor on the actor’s behalf. Brando was boycotting the ceremony in protest of Hollywood’s treatment of Native Americans. 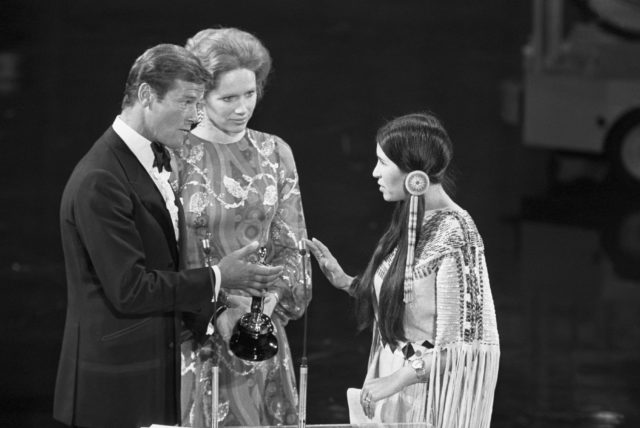 At the 1973 Academy Awards, Sacheen Littlefeather refuses the Academy Award for Best Actor on behalf of Marlon Brando who won for his role in The Godfather. She carries a letter from Brando in which he explains he refused the award in protest of American treatment of the Native Americans. (Photo Credit: Bettmann / Getty Images)

In the case that Brando won Best Actor, he’d told Littlefeather not to touch the statue and also prepared for her an eight-page speech explaining his refusal of the award. However, before she went on stage, producers warned her that if her speech went beyond 60 seconds, they would have her arrested. As such, she was forced to improvise and paraphrase the speech.

“[Brando] very regretfully cannot accept this very generous award, and the reasons for this being are the treatment of American Indians today but the film industry – excuse me – and on television in movie reruns, and also with recent happenings at Wounded Knee,” she said while on stage. During the speech, Littlefeather faced booing and racial gestures.

Reflecting on the event in 2022, she told the official Academy blog, “I focused in on the mouths and the jaws that were dropping open in the audience, and there were quite a few. But it was like looking into a sea of Clorox, you know, there were very few people of color in the audience.”

Not only did she face verbal abuse during the speech. Littlefeather explained how John Wayne, the famous Western film actor who once said “… Indians were selfishly trying to keep [the US] for themselves,” had to be restrained by security to prevent him from attacking her on stage.

When she’d finished refusing the award and walked off stage, she read the eight-page speech Brando had written for her in full to reporters backstage. 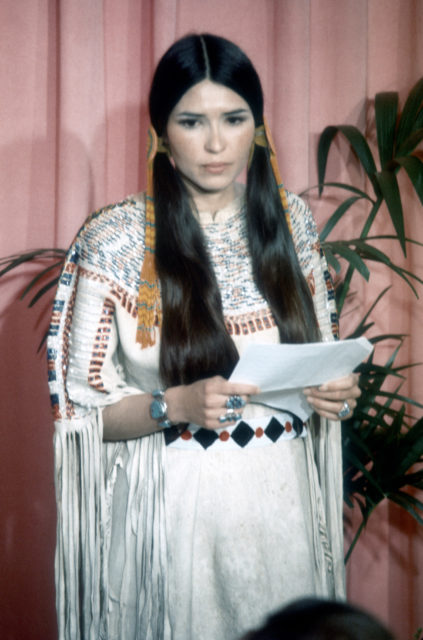 Littlefeather faced a lot of condemnation for her participation in Brando’s refusal of the Oscar, and following the award ceremony, she struggled to get work as an actress. She was essentially blacklisted from Hollywood. The federal government even threatened to shut down any production she was involved in that would air nationally.

Instead of pursuing acting, Littlefeather instead focused her efforts on activism and founded performing arts organizations for Native people. For all of the condemnation she faced, she also received praise and support from people like civil rights activists Cesar Chavez and Coretta Scott King, the widow of Martin Luther King Jr.

The Academy issued a formal apology to Littlefeather 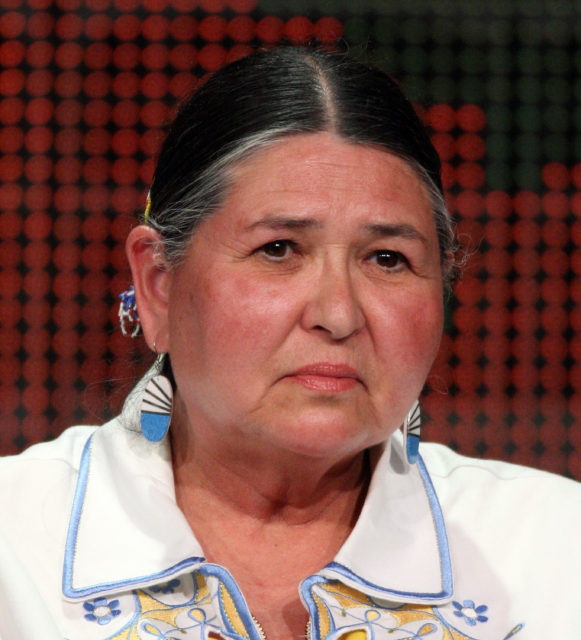 Nearly a half-century later at 75 years old, Littlefeather finally received a formal apology from the Academy. Former Academy president David Rubin wrote the letter of apology on June 18, 2022, which read “The abuse you endured because of this statement is unwarranted and unjustified. The emotional burden you have lived through and the cost to your own career in our industry are irreparable. For too long the courage you showed has been unacknowledged. For this, we offer both our deepest apologies and our sincerest admiration.”

The apology was long overdue, and Littlefeather cried for several minutes when it was read aloud to her. “Regarding the Academy’s apology to me, we Indians are very patient people – it’s only been 50 years! We need to keep our sense of humor about this at all times. It’s our method of survival. This is a dream come true. It is profoundly heartening to see how much has changed since I did not accept the Academy Award 50 years ago. I am so proud of each and every person who will appear on stage,” she said.

‘I did not do this totally for Marlon’ 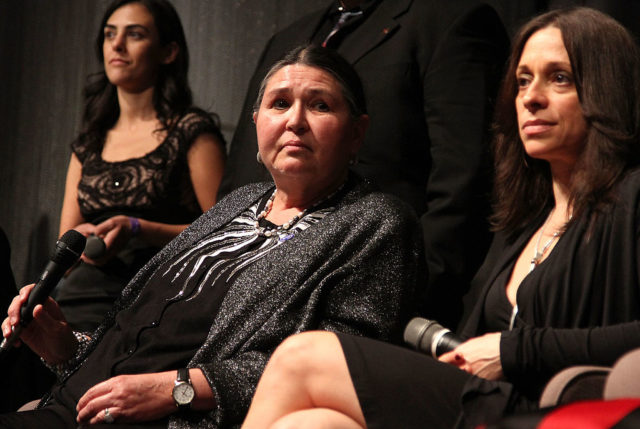 Sacheen Littlefeather sat down with Variety to reflect on the 1973 Oscars ceremony. “I [promised] Marlon Brando that I would not touch that Oscar,” she said “But, as I walked off that stage, I did in the ways of courage, honor grace, dignity and truthfulness. I did so in the ways of my ancestors and the ways of Indigenous women.”

She also clarified that despite her friendship with Brando, which was based on their mutual interest in Native American Indigenous issues, her actions were not solely for his benefit. “I did not do this totally for Marlon. I did not do this on my behalf. I did this for all Native people everywhere who suffered from racial prejudice and discrimination.” 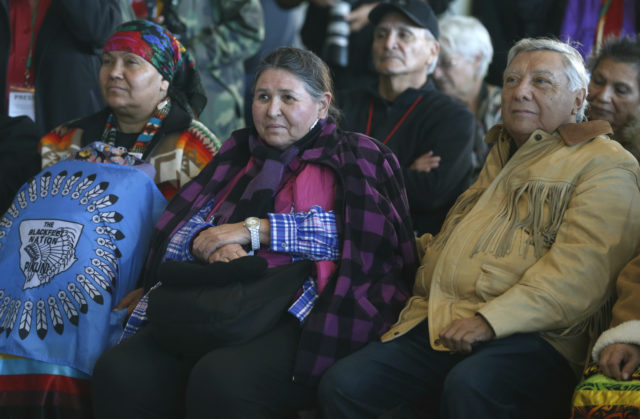 Along with the apology was an invitation for Littlefeather to join the Academy Museum of Motion Pictures as the guest of honor at “an evening of healing and Indigenous celebration” on September 17, 2022. The event hosted several Native artists, including Bird Runningwater, co-chair of the Academy’s Indigenous Alliance, and Virginia Carmelo, a descendent of the Tongva people who will lead a land acknowledgment.

More from us: The Shocking Opening Performance That Nearly Ruined the Academy Awards

“We are delighted and humbled that Sacheen has so generously chosen to engage with the museum and Academy to reflect upon her trying experience at the 1973 Academy Awards,” said Jacqueline Stewart, director and president of the Academy Museum. “Our thanks go out to Bird Runningwater and Heather Rae for helping us foster our cherished relationship with Sacheen.”

« Meet Hal Needham, The Stuntman Who Inspired Brad Pitt’s Character in ‘Once Upon a Time in Hollywood’
Is the ‘Goonies’ Legend True? Possible ‘Beeswax Wreck’ Found Off Oregon Coast »