Meet Hal Needham, The Stuntman Who Inspired Brad Pitt’s Character in ‘Once Upon a Time in Hollywood’

Hal Needham was an adrenaline junkie if ever there was one. The American stuntman spent his career crashing cars, jumping from planes, trick riding on horses, and even tackling a man on a horse from an airplane! The celebrated stunt expert, director, and NASCAR team owner inspired Brad Pitt’s character Cliff Booth in the 2019 film by Quentin Tarantino, Once Upon a Time in Hollywood.

In the film, Cliff Booth is a former stuntman and best friend of washed-up actor Rick Dalton (Leonardo DiCaprio). Booth ultimately finds himself in the middle of a fictitious recounting of the Manson family murders in 1969. Tarantino based Booth and Dalton’s relationship on the real-life friendship between stuntman Hal Needham and actor Burt Reynolds, a legendary duo who not only worked together but also lived on the same property for 12 years. 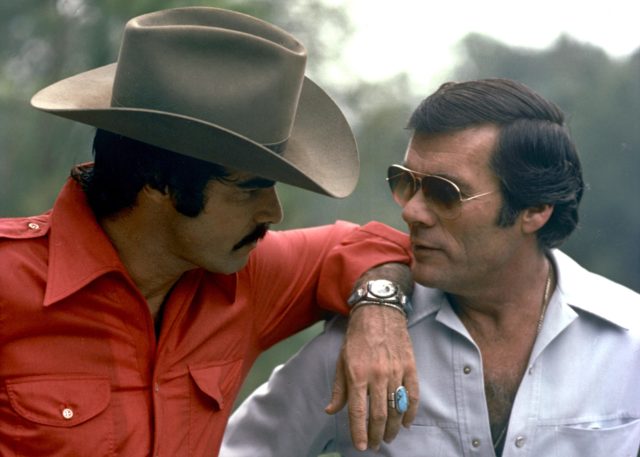 Burt Reynolds (left) and Hal Needham (right) behind the scenes of Smokey and the Bandit (1977). (Photo Credit: Universal Pictures / murraymomo via MovieStillsDB)

In a nod to Reynolds and Needham, Tarantino originally cast Reynolds as George Spahn in his movie – the elderly owner of the Spahn Movie Ranch that became a base for Charles Manson‘s cult. Unfortunately, Reynolds passed away in 2018, before filming began. 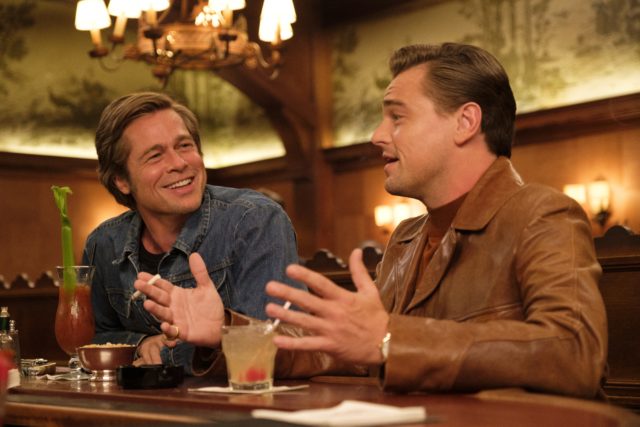 Brad Pitt (left) and Leonardo DiCaprio (right) play Cliff Booth and Rick Dalton in Once Upon a Time in Hollywood, characters based off of Hal Needham and Burt Reynolds. (Photo Credit: Columbia Pictures / michaella92 via MovieStillsDB)

Brad Pitt’s character is cool, charming, handsome, and a bit reckless – even reportedly challenging Bruce Lee to a fistfight. But Hal Needham was even more incredible, inventing stunt rigs, breaking bones, and feuding with John Wayne.

From paratrooper to stuntman

Born in Memphis, Tennesee in 1931, Needham was the youngest of three children. He served as a paratrooper in the Korean War and got his start in Hollywood as a billboard model for Viceroy cigarettes. 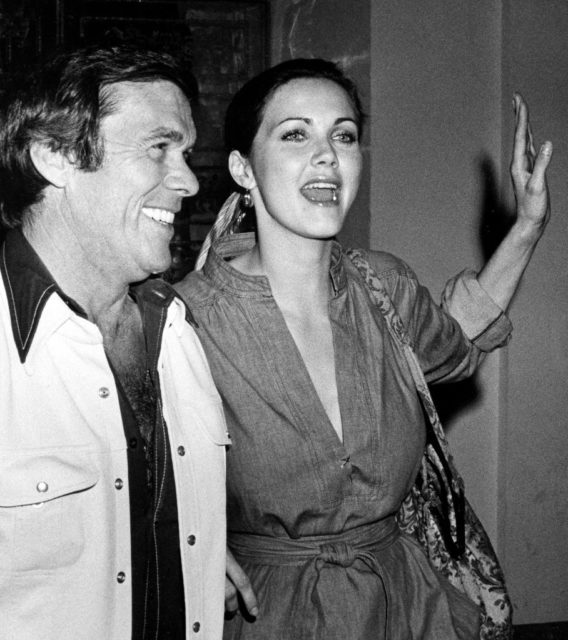 Needham’s first big Hollywood break was as a stunt double for Richard Boone on the popular TV western Have Gun, Will Travel. He trained under John Wayne’s stunt double Chuck Roberson and soon shot to the top of the stunt world. Starring in popular films of the ’60s like How the West Was Won, McLintock!, and The Bridge at Remagen, Needham was a regular stunt double for stars like Clint Walker and of course Burt Reynolds.

As his career progressed, Needham dabbled in stunt coordinating and design, working on innovative safety techniques like the use of airbags. He performed crazy car stunts that would put The Fast and the Furious to shame, from car flips to rolling over a pickup truck. Though he always got the best shots, Needham recklessly sacrificed his health for his stunts. In a 2010 interview, the then 79-year-old Hal shared, “I’ve broken fifty-six bones, broke my back twice, punctured a lung and knocked out a few teeth.” 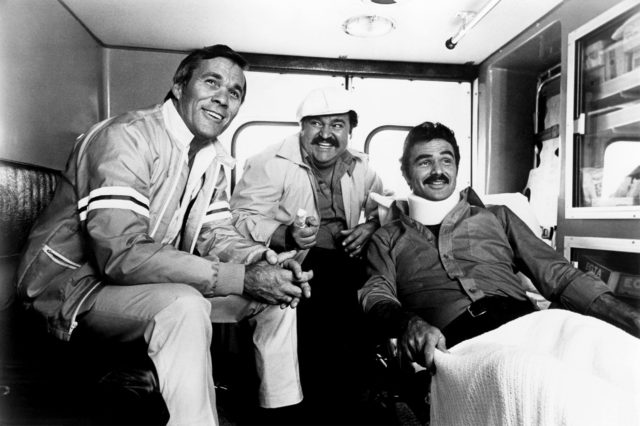 Cars weren’t his only area of expertise. His days as a stuntman in Westerns also led to some crazy tricks. In Have Gun, Will Travel he jumped onto a moving stagecoach and launched himself from a rock 30 feet in the air – all without any padding! And in Little Big Man (1970), Needham jumped from one horseback to another.

In White Lightning, Needham was doubling for Burt Reynolds as a moonshiner running from the police. Escaping the cops by car, Reynolds’ character launches his vehicle and lands it on a moving barge. Hal shared how the stunt nearly cost him his life. “Just before we made the shot, I wanted to calm down the captain so he was thinking straight,” Needham said. “I said okay captain, when I say go, firewall that thing.” 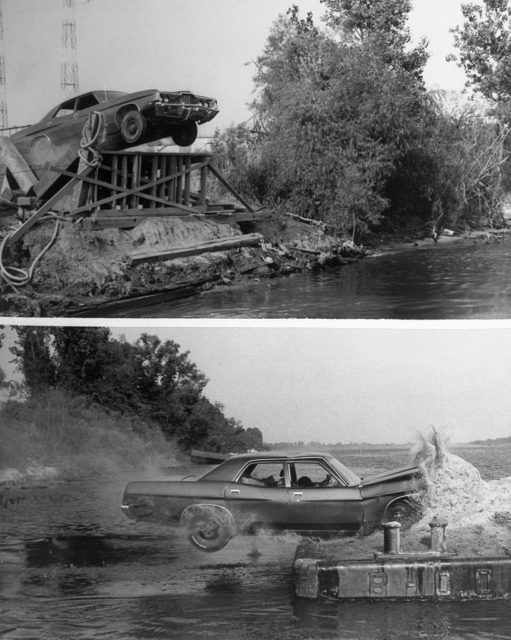 Hal Needham drives the stunt car off a bridge and onto a barge in the Arkansas River wharf while filming White Lightning. (Photo Credit: VCG Wilson / Bettmann Archive)

The captain of the barge launched the boat with the maximum throttle, and suddenly the distance between the launch point and the barge became much wider than rehearsed. “I had planned on landing 20 to 30 feet up on the barge. So I thought, I’ll really give them a show. I just stood on the accelerator. I was planning on hitting the end of the ramp at about 60 to 65 mph. I just stood on the gas and I was probably doing 80 mph.” Needham explained, “If I hadn’t been a showoff, that car would never have made the barge.”

Hal was more than a stuntman

In 1971, Needham formed Stunts Unlimited with Glenn Wilder and Ronnie Rondell. At the time, Needham had written a screenplay for a Western film called Smokey and the Bandit, and his friend Burt Reynolds allowed him to direct. The film was a huge hit and was followed by other successes like The Cannonball Run (1981), Hooper (1978), and Stroker Ace (1983). 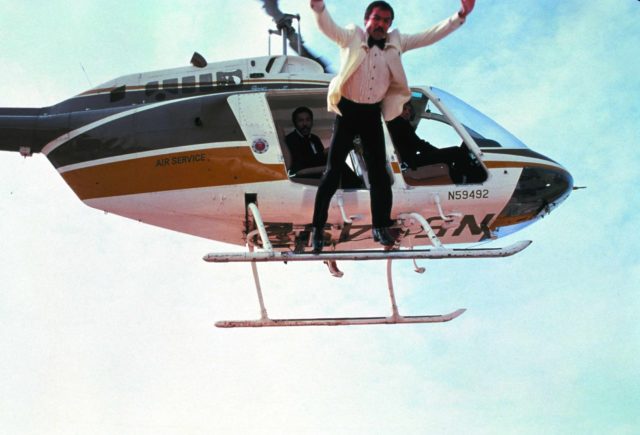 He continued to write and direct into the ’90s, but never took himself too seriously. In an interview with the Los Angeles Times, Needham shared, “I know one thing; I’ll never win an Academy Award. But I’ll be a rich son of a bitch. And that’s what it’s all about.”

Needham actually did win an Academy Award in 2012, one year before his death. He was awarded the Governor’s Award by the Academy of Motion Pictures Arts and Sciences for developing the Shotmaker Elite Camera Car and Crane. The Academy described him as “an innovator, mentor and master technician who elevated his craft to an art and made the impossible look easy.” 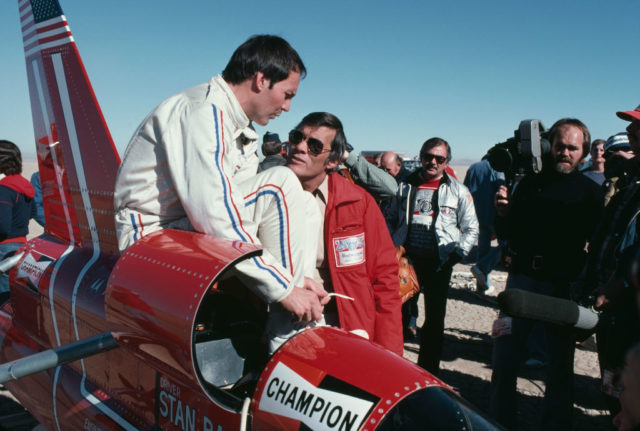 Even off-screen, Hal’s life was nothing short of action-packed. In the late 1970s, he left stuntwork and focused on the World Land Speed Record project, which was aimed at the highest speed achieved by a person in a vehicle. Needham’s team created the Budweiser Rocket, which ultimately failed to break the record. His interest in race cars led Needham and Reynolds to co-own the Mach 1 racing team.

He schooled John Wayne on set

Even though he loved to wear gold chains (and a pendant made from a gold toothpick that was a gift from actress Ann-Margret), Hal was remembered as a modest man. But that doesn’t mean he didn’t see his fair share of Hollywood drama, including the time he ended up in a fist fight with legendary Western star John Wayne. 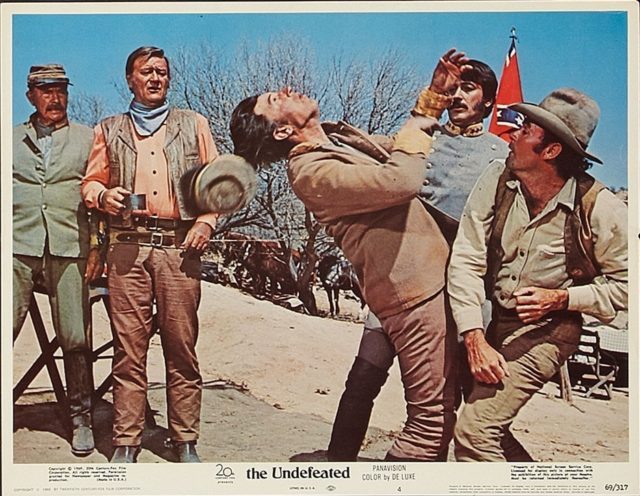 A lobby card from The Undefeated (1969) shows the punch in question. (Photo Credit: 20th Century Studios via MovieStillsDB)

On the set of The Undefeated (1969), Wayne was struggling to make a fake punch look believable since the camera angle was less forgiving than usual. In his memoir, Stuntman! My Car-Crashing, Plane-Jumping, Bone-Breaking, Death-Defying Hollywood Life, Needham explained: “Duke was throwing a straight-on jab by the side of the guy’s face. You could tell he was missing the guy by a mile.”

More from us: This Incident Shows Why Burt Reynolds Wasn’t To Be Messed With
Hal stepped in and demonstrated an almost-too-close punch on Wayne’s target, which would come back to haunt him. Later on, Wayne spotted Needham in a bar and put the stuntman in a headlock, reprimanding him for making him look weak in front of the entire film crew. It’s no wonder Hal Needham is remembered as the toughest stuntman in Hollywood history.
« Arnold Schwarzenegger, With a Net Worth of $450 Million, Cut Financial Support From His Son
Fifty Years Later, the Group Behind the Oscars Apologized to the Woman Who Refused Marlon Brando’s Award »