There are some items that farmers might expect to discover while tending to their fields of crops: garbage, broken farming equipment, or perhaps rare historic coins. Some have even found unexploded land mines or other war-related materials. What they probably don’t expect to unearth, however, is a massive, perfectly preserved, Byzantine-era mosaic. This is exactly what Palestinian farmer Salman al-Nabahin found, entirely by accident, while tending to his land that was planted with olive trees.

It was a day like any other when al-Nabahin and his son were working in their olive orchard in the Gaza Strip. Having planted new olive trees recently, he was concerned that they weren’t thriving and hadn’t properly taken root. He and his son decided to get to the bottom of the problem by digging down into the dirt to see if they could figure out why. When his son hit something hard, the pair began to dig it out, only to find a massive and detailed mosaic. 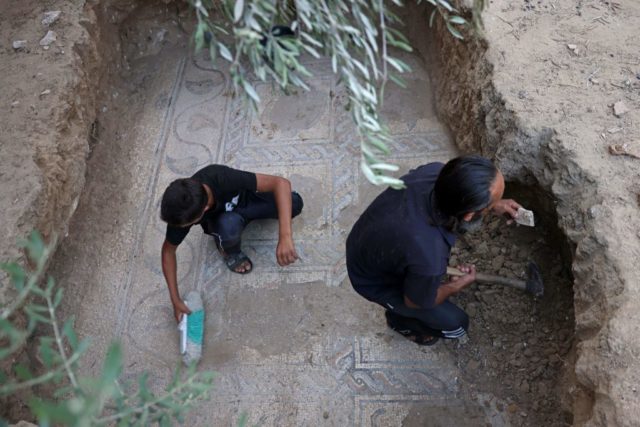 Al-Nabahin uncovered most of the mosaic himself and has dug up three different sections. The parcel of land holding the mosaic is about 500 square meters (or 5,400 square feet), and the three excavated spots reveal glimpses of the mosaic. Generally, the discovery appears to be in excellent condition, considering it has been buried below ground for so many years, although there are some portions that have sustained damage – likely from the roots of the olive trees planted in the area.

Since the discovery was made, researchers with the Palestinian Ministry of Tourism and Antiquities as well as the French Archaeology School worked to learn what they can about the mosaic. Archaeologists are unsure whether the design was meant to be religiously symbolic or if it was secular. Regardless, the brightly-colored design shows 17 different birds and other animals surrounded by curling leaves and vines. 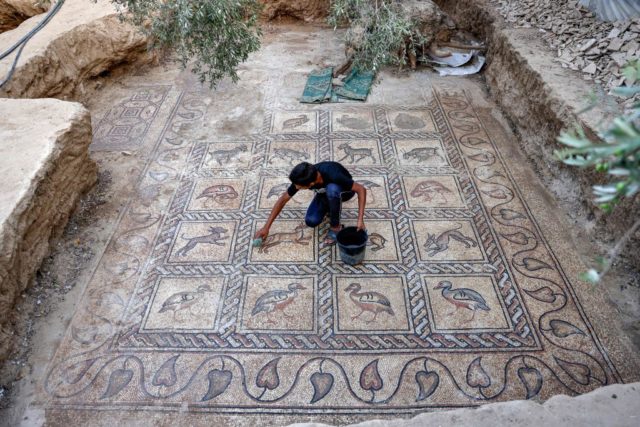 The son of Palestinian farmer uses a sponge to uncover Byzantine mosaics discovered by his father while ploughing his land in Bureij in the central Gaza Strip, September 18, 2022. (Photo Credit: Mohammed Abed/ AFP/ Getty Images)

One of the archaeologists involved in the ongoing investigations, René Elter, said, “These are the most beautiful mosaic floors discovered in Gaza, both in terms of the quality of the graphic representation and the complexity of the geometry. Never have mosaic floors of this finesse, this precision in the graphics and richness of the colors been discovered in the Gaza Strip.”

Researchers have also been able to date the piece to sometime between the fifth and seventh centuries, the era of the Byzantine Empire. The Byzantine Empire was, essentially, the remaining Eastern part of the Roman Empire that didn’t fall, while the Western portion had. It was managed out of the capital city of Constantinople, now modern-day Istanbul, but spread out extensively and ruled much of the land.

The empire existed from 395 AD, when the Roman empire split, until 1453, when it fell to the Ottomans. Throughout Byzantine rule, the empire was considered to be one of the most powerful forces on the continent, culturally, militarily, and economically. 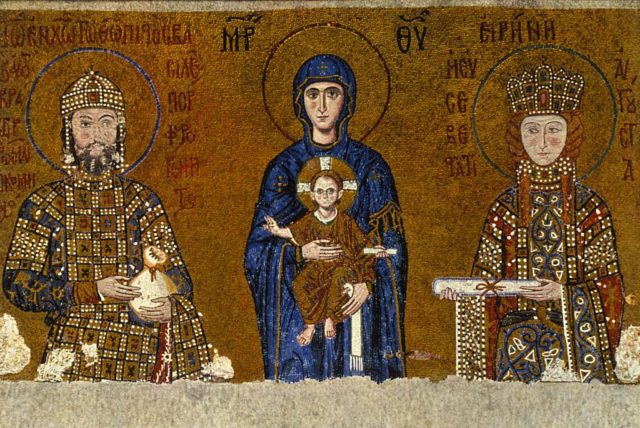 The Gaza Strip, where the mosaic was found, was at one point also part of the Byzantine Empire. This explains the years that it was dated to, as well as why it is identifiable as a Byzantine piece.

Although the location of the mosaic tells archeologists a lot about the artwork, it also puts the piece in direct danger as it is situ in one of the most volatile locations in the middle of the Israeli – Palestinian conflict. The precise location where al-Nabahin found the mosaic was in the Bureij refugee camp only half a mile from Israel. The problem is that it’s in these areas where most of the clashes occur, including shelling and misfiring rockets which could easily damage such a priceless piece. 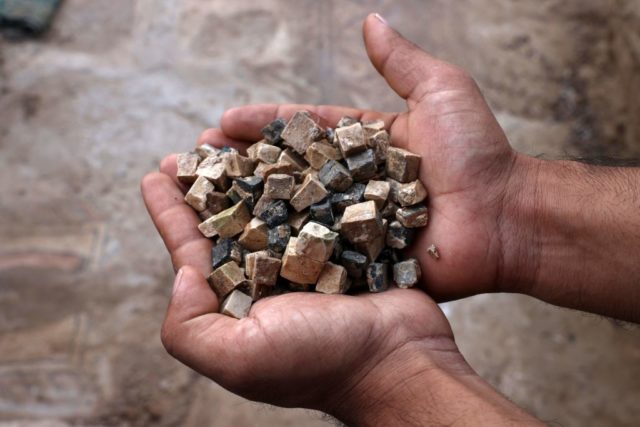 Palestinian farmer Salman al-Nabahin holds in his hands a pile of broken mosaic pieces which came from the discovery he made while ploughing his land, September 18, 2022. (Photo Credit: Mohammed Abed/ AFP/ Getty Images)

More from us: This 1,200-Year-Old Shipwreck is Re-Writing History Books

Many ancient artifacts have been found in this area, as well as the remains of these historic civilizations, although not as many as historians would like. This is perhaps due to the conflict and lack of funding for preservation. When talking about the discovery, al-Nabahin humbly said that it is a treasure, but not his, one that “belongs to every Palestinian.”

« Lucille Ball Sent Carol Burnett Flowers The Day She Died
Werewolves: The Real History Behind The Frightening Legends of Lycanthropy »