13 Celebrity Couples Who Make Us Believe in True Love

These days it’s nearly impossible to keep up with celebrity relationship gossip. New headlines about who’s getting divorced, who’s been spotted together, or who’s been cheated on pop up in the tabloids every day, but we can count on these twelve celeb couples who have proven that true love and happily-ever-afters are far from fiction. 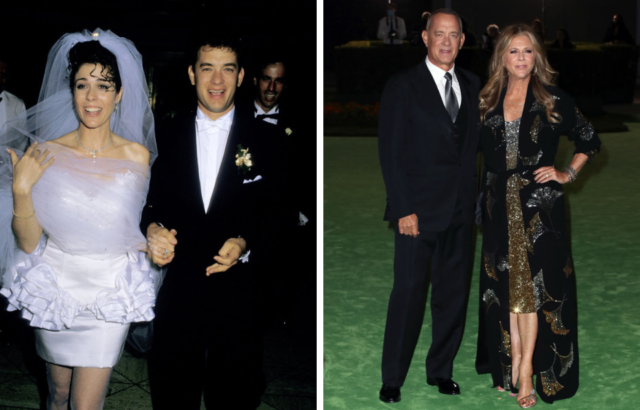 Tom Hanks and Rita Wilson first met on the set of ABC sitcom Bosom Buddies in 1981, and while their relationship started as just a friendship – since Hanks was married to his first wife Samantha Lewes – Wilson and Hanks went public with their relationship in 1986. They married in 1988 and have two kids together, Chester “Chet” Hanks and Truman Theodore Hanks.

Ever since they first appeared together on the red carpet four decades ago, Hanks and Wilson have remained one of Hollywood’s favorite power couples. 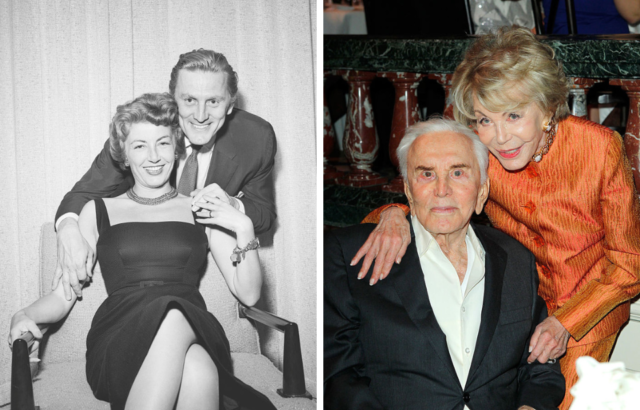 Kirk Douglas and Anne Buydens were married for 66 years, but initially, the pair didn’t get along. Douglas was already an established celebrity when he met French public relations expert Anne Buydens in 1953 on the set of his movie Act of Love while filming in Paris.

Douglas invited Buydens to his trailer hoping to ask her out on a date. “I thought, I’ll take this young beauty to dinner at the most romantic (and expensive) restaurant in Paris, La Tour d’Argent,” Douglas recalled in a Los Angeles Times interview. “She’s sure to approve of my taste and my ability to get a last-minute reservation.” Douglas was taken aback when Buydens replied, “No, I think I’ll stay in and have some scrambled eggs.”

The movie star was shocked that someone would decline the chance to have dinner with a celebrity, but as the pair got to know each other – and as Douglas “stopped talking about myself and began to listen to her,” their relationship began to blossom. They married in 1954 and had two children together. They remained married for the rest of their lives, both living past the age of 100! 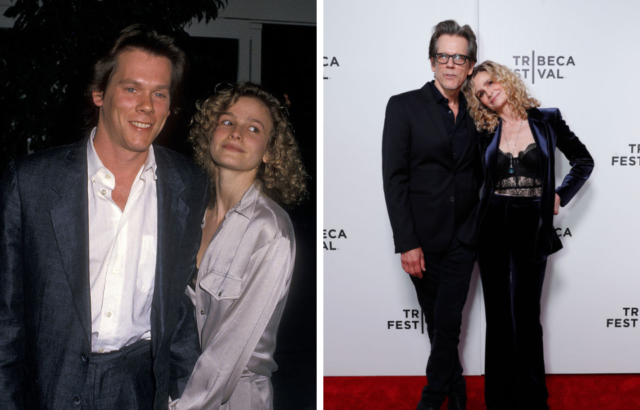 The effortlessly cool A-list couple Kevin Bacon and Kyra Sedgwick have been together for over thirty years. The pair met while filming PBS’ Lemon Sky and got married in 1988.

Sedgwick shed some light on their relationship when asked about the secret to a successful marriage. “I joke that the secret to a successful marriage is to not take marriage advice from celebrities. I guess if I had to think too much about [our marriage], that would probably not be a good thing. We just got lucky. I honestly believe that’s the truth.” 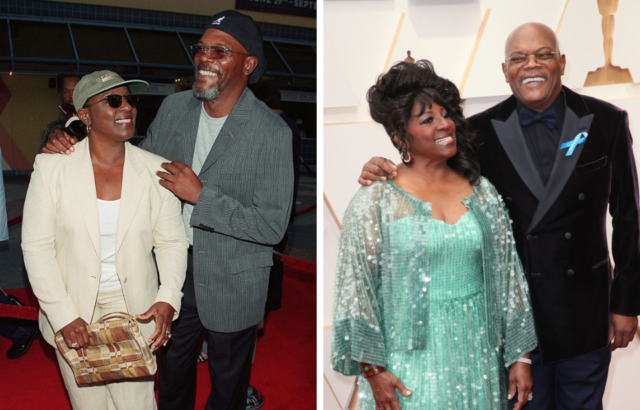 The secret to Samuel L. Jackson and LaTanya Richardson‘s 41-year marriage? They made a pact to stick together no matter what, and they’ve followed it through! The college sweethearts have been together through thick and thin, even through Jackson’s battle with drug addiction.

“She gave me the chance to be the man I was supposed to be,” Jackson shared about his wife, who got him into rehab to overcome his addiction. This ultimately helped his career take off with a role in Spike Lee’s 1991 film Jungle Fever. 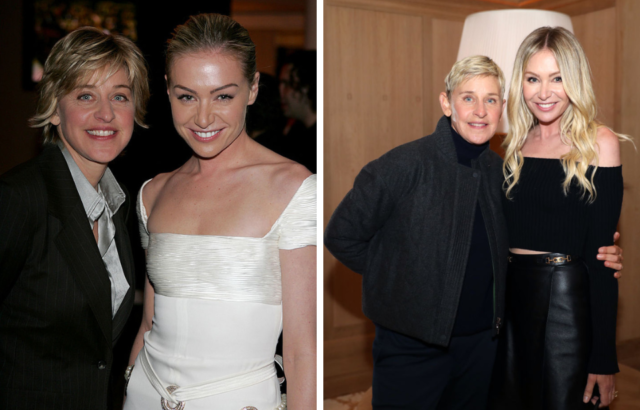 Ellen DeGeneres made history in 1994 when she proudly declared “yep, I’m gay.” Ten years later she would help her now wife Portia de Rossi do the same. The couple met in 2004 and became inseparable, but being the partner of one of the most famous openly gay women in Hollywood was sometimes overwhelming as de Rossi was figuring out her sexuality.

By 2005, de Rossi and DeGeneres moved in together, and Ellen glowed as she shared her feelings with PEOPLE. “It’s the first time that I’ve known in every cell of my being that I’m with somebody for the rest of my life.” The couple married in an intimate backyard wedding in 2008 and recently celebrated 14 years of marriage. 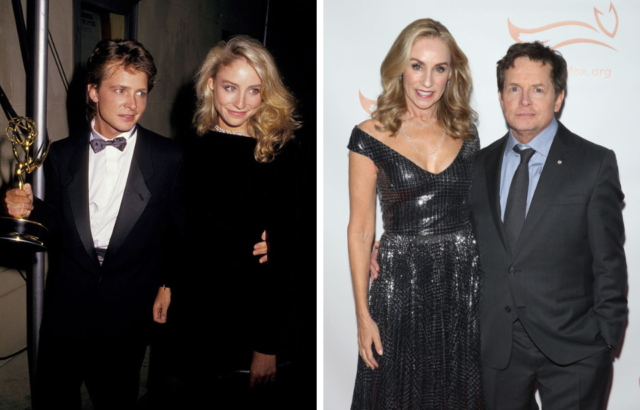 The year 1988 seems to have been a lucky one for celeb couples, as Michael J Fox and Tracy Pollan are joining this growing list of spouses who chose to wed 34 years ago (along with Tom Hanks and Rita Wilson, and Kevin Bacon and Kyra Sedgwick).

Fox first met his future wife and then-costar Tracy Pollan on the set of Family Ties. Interestingly enough, when Fox first met Tracy, she was in a committed relationship with none other than Kevin Bacon! Michael reached out to Tracy as soon as he heard she and Bacon had split, and they were engaged after just seven months of dating.

Tracy has supported her husband through it all, including the “in sickness and in health” parts. Fox was diagnosed with Parkinson’s disease in 1991 at just 29 years old. Pollan and Fox are both advocates for Parkinson’s research and awareness, opening the Michael J. Fox Foundation for Parkinson’s Research in 2000. 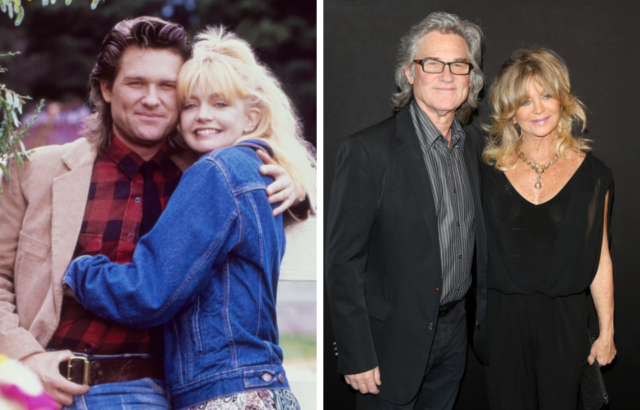 Goldie Hawn and Kurt Russell’s love story is as unique as it is romantic! The couple, who have chosen not to get married, first met in 1968 on the set of The One and Only, Genuine, Original Family Band but it wasn’t until they reunited while filming Swing Shift in 1983 that they began dating – the same year both Hawn and Russell divorced their previous spouses.

After nearly 40 years together, their spark is stronger than ever. “I think the secret is to know when to depend on somebody and when not to,” Hawn told Women’s Day. “I believe that one person can’t bear the whole burden because then their shoulders start getting heavy. The other part is to stay as sexy as you can and make sure you focus on all of those aspects of a healthy relationship – and sexuality is definitely one of them.” 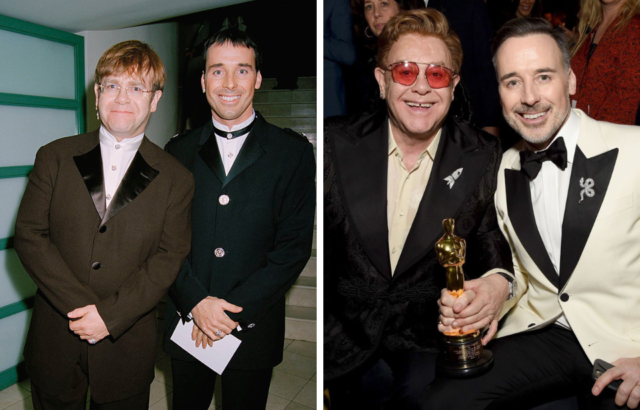 Elton John found someone who would never go breakin’ his heart in 1993. According to John, he and his husband David Furnish fell in love at first sight. “We fell in love very quickly. He was independent. I didn’t need to take care of him. I thought, ‘God, this is new territory for me — someone wants to be with me just because he likes me,'” explained the “Rocketman” singer. After over a decade together the couple finally made their relationship public in 2005, shortly after same-sex civil partnerships were made legal in the UK.

John and Furnish married in 2014, and have two sons together: Zachary and Elijah. In an open letter to his sons to mark his 75th birthday, John shared the inspiring advice that led him to find his husband:

“When I was young, I was told to fit in, to do what others expected even when it didn’t feel right. Now I realize I can only be me. Being true to myself is what gave me my voice and helped me face my greatest fears. I’ve forged deep friendships, found the love of my life, and became your Daddy. Whoever you grow up to be, just be you — fully and completely you.”

Will Smith and Jada Pinkett Smith 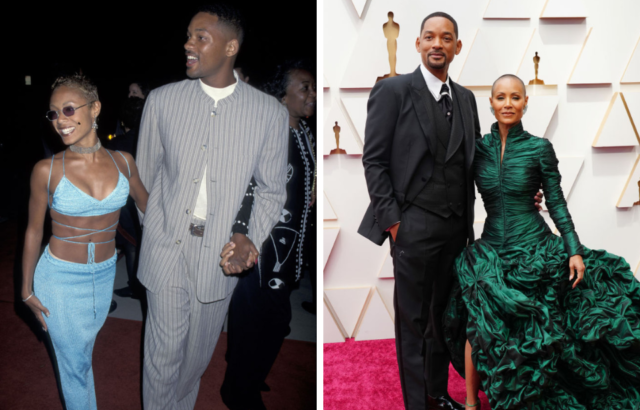 Will Smith first met his future wife Jada Pinkett Smith in 1994 on the set of Fresh Prince of Bel Air. Smith was instantly smitten, but there was one slight problem: he was already married! When Smith split from his wife Sheree Zampino, he called Jada out of the blue and asked if she was seeing anyone. When she said no, he cooly answered “Cool. You’re seeing me now.”

Will and Jada married on New Year’s Eve, 1997 while they were expecting their first child Jaden. Despite countless rumors of divorce throughout the years, the couple is stronger than ever – and some think it has to do with their open marriage. After shooting down the speculations of their relationship status, Will Smith came clean to GQ Magazine in 2021 and shared that he and Jada have an open, non-monogamous relationship. 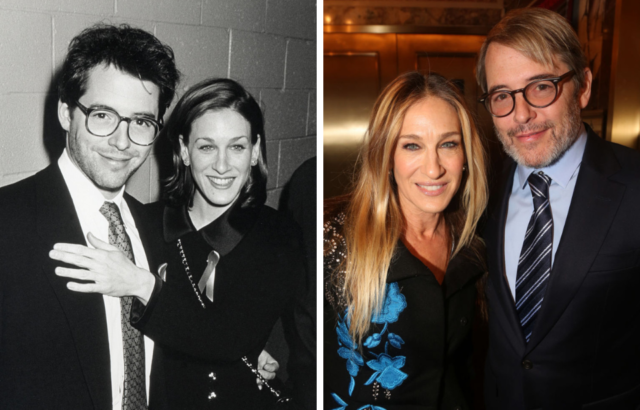 While her Sex and the City character Carrie Bradshaw might have struggled to find her Mr. Right (or should we say Mr. Big?), Sarah Jessica Parker bonded with her husband Matthew Broderick over their shared love of Broadway musicals. Shortly after Parker split from longtime beau Robert Downey Jr. in 1991, Broderick was introduced to SJP through the actresses’ brothers who own a theater company.

The couple starred together on the 1996 Broadway run of How To Succeed in Business Without Really Trying. Parker glowed as she spoke to The Los Angeles Times about her new romance with the Ferris Beuller’s Day Off star: “He’s so bright, so handsome, I think he’s the most handsome man I’ve seen in my life. And he inspires me. I’m mad for him, totally.”

Parker and Broderick married in 1997, and despite keeping their relationship as private as possible they are clearly as in love as they were two decades ago. 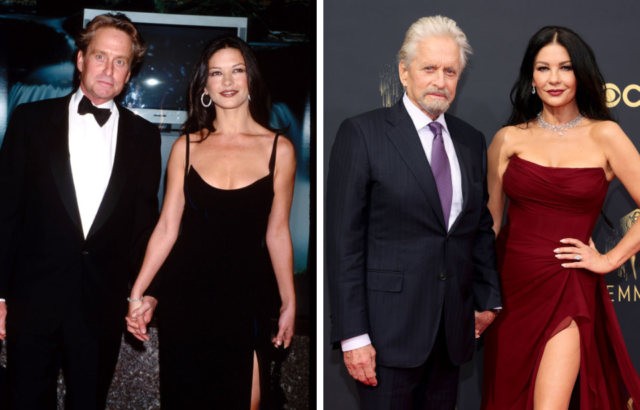 It seems like long-lasting love doesn’t fall from the Douglas family tree! Kirk Douglas’ son Michael Douglas has been married to celebrated Welsh actress and performer Catherine Zeta-Jones for 21 years. Despite their 25-year age gap, the couple has proved that their love is true over the years, even though they may have gotten off on the wrong foot.

Douglas and Zeta-Jones were first introduced by another Hollywood couple, Antonio Banderas and Melanie Griffith, at a dinner event in 1998. Douglas invited Zeta-Jones to his hotel for a nightcap, and as she jetted off the next day Douglas sent her flowers to apologize for his very forward pickup line: “I’m going to be the father of your children.” He wasn’t wrong, though!

The couple married in 2000 and share two children together. Their romance hasn’t been without hardship, but Zeta-Jones stood by her husband when he was diagnosed with Stage IV tongue cancer, and Douglas did the same during his wife’s battles with bipolar disorder. Douglas explained what keeps their marriage strong:

“True love takes work. Love is an extraordinary feeling that comes from the bottom of your soul, but has to be nurtured, you know. The thing I’ve learned about getting older is you can’t take love for granted.” 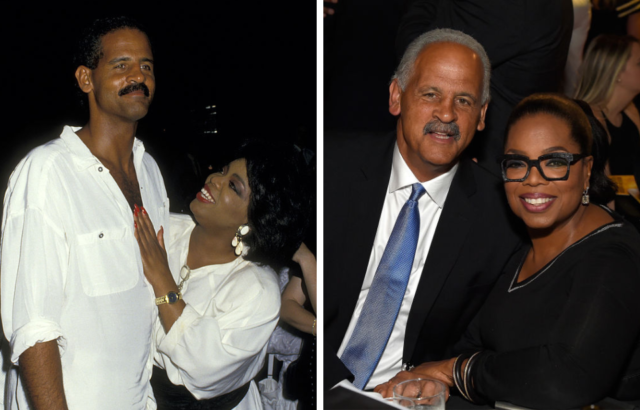 Some things everyone knows were meant to be together: peanut butter and jelly, macaroni and cheese, and of course Oprah and Stedman! The couple has been together for 36 years, but the connection didn’t happen when they first met in 1986. “I figured he must be a player. So did all my producers. They warned me not to get involved with that Stedman guy” Orpah penned in a 2020 article for her magazine O.

First impressions aside, Winfrey and Graham began dating later that year – and the rest is history! After several years of “will they or won’t they” gossip in the tabloids, Oprah set the record straight explaining that she and Stedman skipped marriage “for a spiritual partnership.” 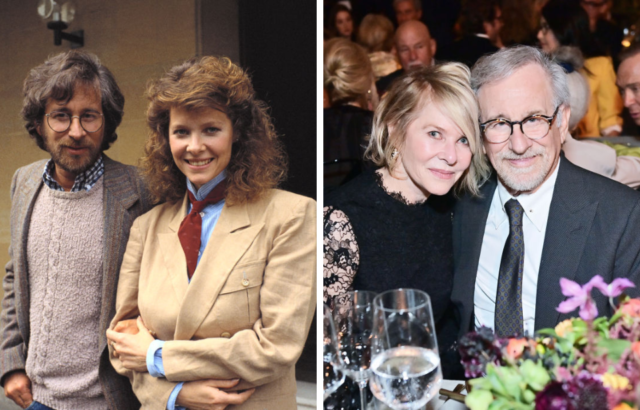 Iconic film director Steven Spielberg and his wife, actress Kate Capshaw, are still going strong after more than 30 years of marriage. The two met in 1984 when she starred opposite Harrison Ford in his film Indiana Jones And The Temple Of Doom. He later told IndieWire, “The prettiest thing that came out of that film was my future wife. I met Kate, my leading lady. My leading lady is still my leading lady.”

More from us: Classic Celebrity Marriages That Were Destroyed By Movies

Although he was married to someone else when they first met, Spielberg and Capshaw are obviously a great match given their staying power. The couple has seven children – one each from previous marriages, three they had together, and two they adopted.