Elisabeth Amalie Eugenie was born to a wealthy family on Christmas Eve 1837 and grew up playing in the Bavarian forests. She was considered the most beautiful princess in Europe and had a zest for life that included traveling, horseback riding, and climbing mountains. Dreams of her future did not include a rigid royal lifestyle. Unfortunately, life in the palace would become her reality. 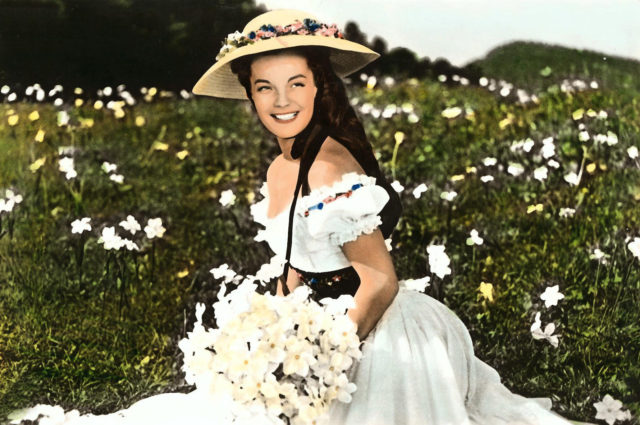 With no desire to become empress, she cried on her way to the Hofburg palace following her marriage to Emperor Franz Joseph I. From this point on, her life would be filled with depression and mental illness, and her tragic demise would come at the hands of an Italian anarchist.

Elisabeth’s mother and Franz Joseph’s mother were sisters, and the two had originally planned for Franz Joseph to marry Elisabeth’s older sister, Helene. However, once Franz Joseph laid eyes on Elisabeth, he became captivated by her beauty. Plans to marry the more sophisticated sister were squashed and he began courting the 16-year-old Elisabeth.

After eight months of courtship, the two became married, and Elisabeth began to crumble under the pressures of court etiquette. She did not love Franz Joseph and found him to have no humor and little imagination. She would encourage him to pursue outside affairs and is rumored to have had an affair herself. 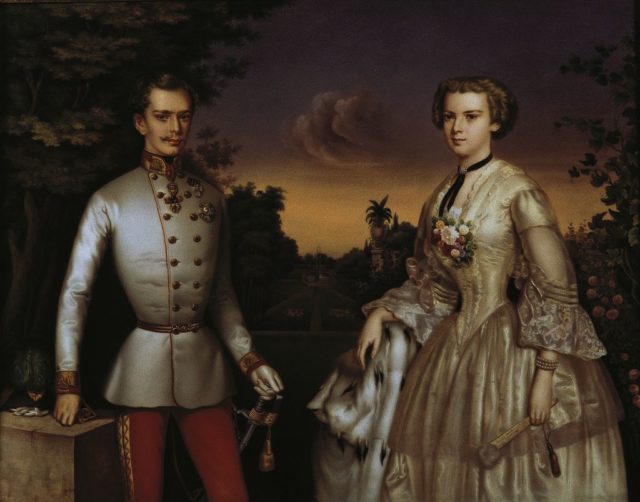 In her first four years as empress, she bore Franz Joseph four children, but only two survived past infancy. Her mother-in-law, Archduchess Sophie of Bavaria, saw her as an immature mother and took over raising Crown Prince Rudolf and Archduchess Gisela herself. Elisabeth would become obsessed with her daughter Marie Valeria after her birth in Budapest in 1868, and Marie would come to be regarded as “The Only Child” because of how her mother spoiled her.

One of the most commonly remembered qualities of Elisabeth was her looks. She was beautiful, and she knew it. Not only was Franz Joseph enthralled with her beauty, but the public was too. She was adored by many, with her soft features and ankle-length chestnut brown hair. Despite being outwardly cynical and dismissing the affections of the public, she was just as fixated on her beauty. 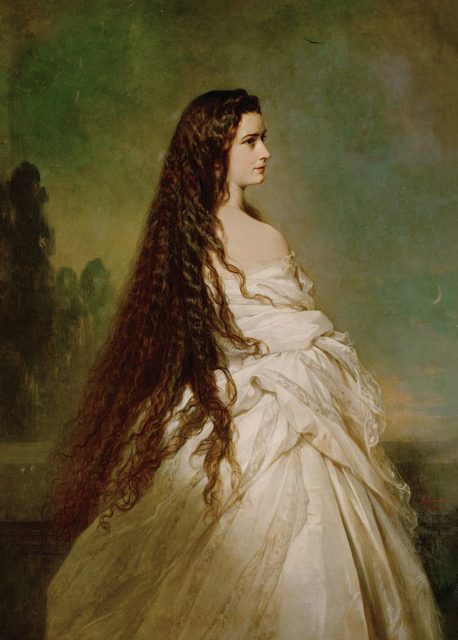 Elisabeth had a strange beauty regime. She spent nearly three hours a day brushing and dressing her hair, and another hour cinching her famed 19.5-inch waist. She would exercise for hours on end, horseback riding, fencing, hiking, and performing exercises adapted from the circus.

To accompany this elaborate beauty regime, she had what can only be considered a severe eating disorder. During their courtship, she became so nervous that she could not bring herself to eat. And for a long time, the empress restricted herself solely to thin broth. Even after her marriage to Franz Joseph, Elisabeth would only expand her diet to include raw milk, oranges, and eggs. 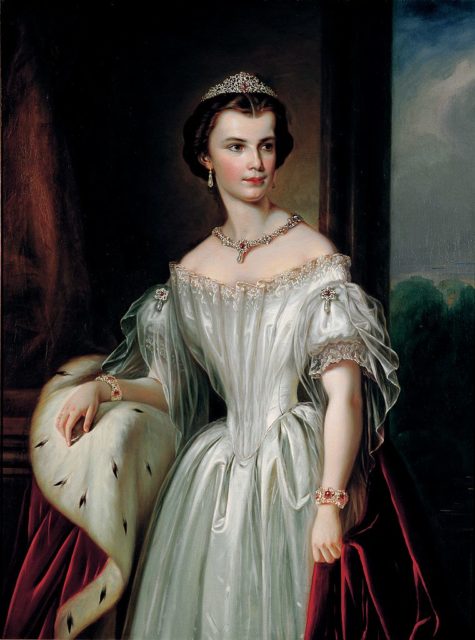 Questions surrounding Elisabeth’s mental health have arisen since her reign as queen. From her mother, Princess Ludovika, she adopted a love of privacy that would not mesh well with her role as empress. This was accompanied by a fear of performing public duties, which made her ill-suited to rule. Instead, she was fascinated by new developments in the treatment of the insane, and wished to open her own psychiatric hospital.

It is said that when asked by Franz Joseph what gift she wished to receive from him, she requested a lunatic asylum, claiming it would bring her much joy. 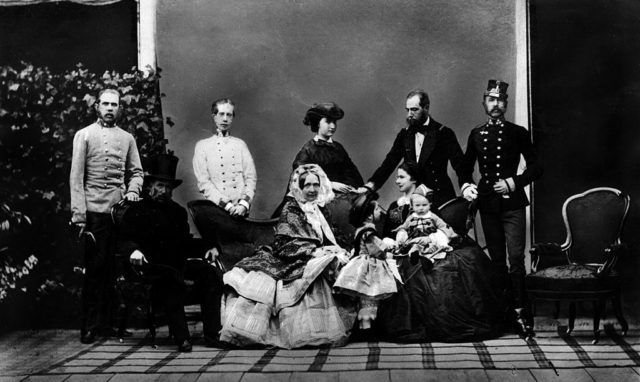 In 1862, Elisabeth experienced a nervous collapse which resulted in her spending as much time away from the Hofburg palace as possible. She instead found peace traveling to foreign countries such as Greece, Ireland, and Hungary. By the 1880s, it was clear that Elisabeth was suffering from a severe mental illness. She was caught laughing hysterically by her daughter, Marie Valerie, while bathing. She also frequently spoke of suicide, deeply unhappy with her life as empress. This scared Franz Joseph, and he often turned to mediums and psychics to try and curb her mental illness.

Although she was not close with her son, resulting from her mother-in-law taking her children to raise them herself, Elisabeth and Crown Prince Rudolf were very similar. They shared political views and both struggled with mental illness. They also both had a distaste for the royal lifestyle and were miserable complying with the rules of palace life.

Rudolf was promiscuous and became involved with a young Mary Vetsera. The two planned a suicide pact that they carried through at the Mayerling hunting lodge in Vienna. Possibly the result of an abortion gone wrong, Mary Vetsera lay dead on the bed while Crown Prince Rudolf sat upright with blood dripping from his mouth. It was a bloody sight that caused the royal family great distress. 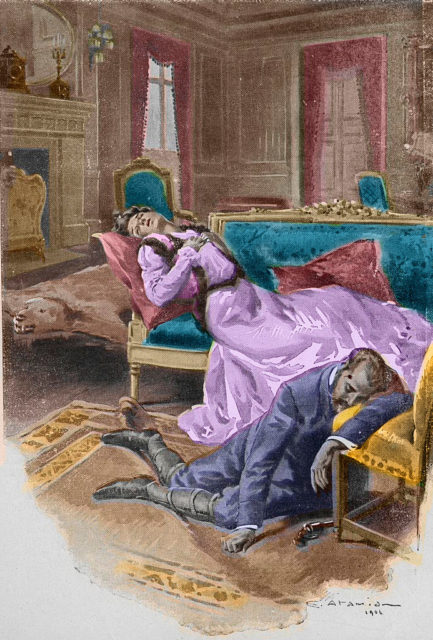 Hearing of her son’s death, Elisabeth was immediately plunged into deep mourning. Already slender, her weight plummeted, and she wore black every day for the rest of her life. She understood the fragility of Austro-Hungarian relations and knew that the death of her son would cause a rift in the empire. His death brought her great personal and political distress.

Elisabeth’s childhood love for travel carried on with her even after the death of her son, but it transformed into a type of aimless wandering. She became lost. She traveled more frequently across Europe and North Africa, with her stop in Geneva in 1898 being her last.

At the same time as her visit to Geneva, Italian anarchist Luigi Lucheni was also in town with plans to assassinate Prince Henri of Orléans in an act of protest against the ruling class. Putting a damper on his plot, Prince Henri never showed up. With foiled plans, Lucheni set his sights on a new target – Empress Elisabeth. 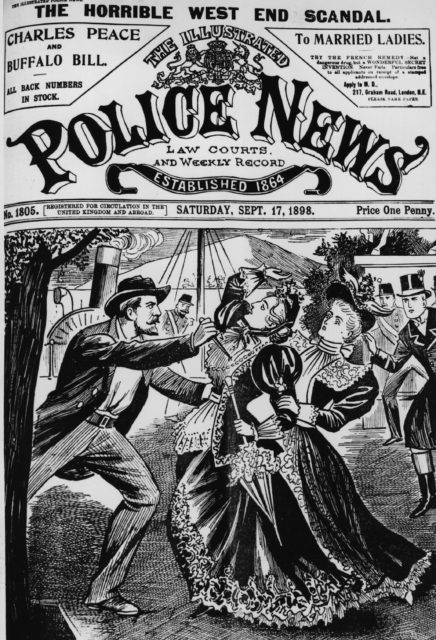 Lucheni approached the empress as she was walking a dock to board a ship. As he approached, he attacked her with a sharp file. At first, Elisabeth believed she had been punched in the gut, but not long after standing back up, she realized that he had stabbed her. It is believed that her extremely tight corset provided her with some time instead of dying more quickly. She is said to have muttered “what happened” as her last words.

The Austro-Hungarian empire was already teetering at the death of her son, and her murder certainly did not help the situation. The eventual assassination of Franz Ferdinand, resulting from a series of events directly linked to these deaths, would be a catalyst in the start of WWI.

« How an Encounter With Elvis Presley Led Tom Petty to Pursue Music
Revealed: Secrets of the Black Prince’s Tomb »