Divers Made an Incredible Discovery Near the Titanic Shipwreck

RMS Titanic is without a doubt the most famous shipwreck in the world. The luxury ship’s sinking has captivated the minds of researchers, leading to numerous underwater expeditions – first to find her, and then to find out as much as possible about her fate. Despite the amount of exploration that’s been done on the ship itself and the surrounding area, researchers are still learning new information.

In 2022, a group of divers made an incredible discovery near the wreckage that was noted 26 years prior, yet no one had investigated what it was until now.

Initially, when RMS Titanic sank on April 15, 1912, the location of the wreck was an estimate at best. It was known that she sank off the coast of Newfoundland, Canada, but the precise location remained a mystery. Multiple expeditions were assembled in the following years in an attempt to find her using sonar, yet they all failed. It wasn’t until 1985 that Titanic was finally located by Jean-Louis Michel and Robert Ballard. 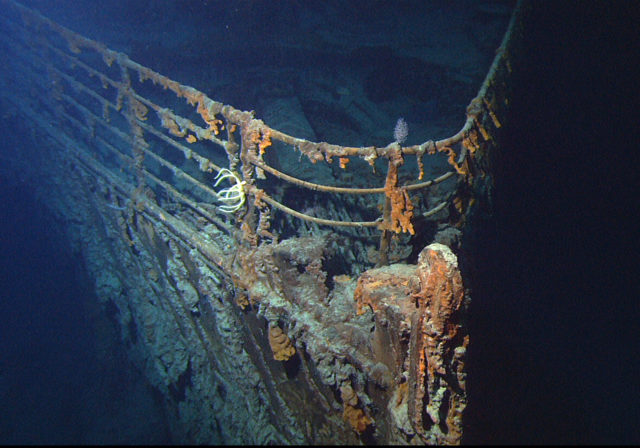 Bow of the RMS Titanic photographed by ROV Hercules during an expedition returning to the shipwreck, 2004. (Photo Credit: National Oceanic and Atmospheric Administration/Wikimedia Commons/Public Domain)

While initially people wanted to try and raise Titanic, she has now been designated as a heritage site and will remain on the ocean floor due to her fragile state. After her initial discovery, many more expeditions have traveled to the wreck, including those designed to retrieve artifacts for public display. Titanic has been visited by both divers and submarines that have been able to provide more details about the ship as well as photographs of where she lies.

It was during one of these expeditions that PH Nargeolet, a submarine pilot and diver, first recorded an anomaly on a sonar. This created a mystery that was only solved 26 years later. When the blip appeared on the sonar during the dive its source was unclear. It looked similar to the Titanic wreck on radar, leading the divers to think that perhaps it was a second shipwreck located near the first, or that it might be some form of geological feature.

Some 26 years ago, PH Nargeolet, a veteran Nautile sub pilot and #Titanic expert, recorded a blip on sonar during an expedition. The feature looked eerily similar to the profile of Titanic…

Nargeolet had to wait a very long time to get an answer as to what he’d found. He eventually did when he joined an expedition funded by the OceanGate Foundation, which had the goal of exploring the area where the blip had first appeared. When asked about it, Nargeolet said, “We didn’t know what we would discover…I’ve been seeking the chance to explore this large object that appeared on sonar so long ago.”

What they discovered was not a shipwreck at all, but a fantastical deepwater rocky reef made up of different volcanic formations and coral. It’s believed it could be thousands of years old. Not only is it ecologically intriguing as a home to a variety of different lobsters, fish, and sponges, but it is also a staggering 2,900 meters deep.

Murray Roberts, one of the researchers involved in the expedition, said of the reef, “It is biologically fascinating. The animals that live there are very different to the animals that are found otherwise living in the abyssal ocean. [Nargeolet] did a really important piece of scientific work. He thought it was a shipwreck, and it turned out, in my mind, even more amazing than a shipwreck.”

As of November 2022, the team is analyzing the images and videos from the dive to share them with the scientific community. This will help them better understand sea life at such a great depth. It could be just the first of many finds, as this was not the only blip that Nargeolet identified on the sonar years ago.

He hopes that he will be able to go on another expedition in the future to investigate a secondary blip near Titanic, one that indicates the presence of something even larger.

« The Gibbet: A Disturbing Device That Punished Criminals Even After Death
9 of the Best Television Shows From the 1970s »