For a comedy show, Saturday Night Live (SNL) certainly has a dark side – an alleged curse that’s been killing cast members since it was first aired. Although a few deaths could easily be written off as coincidence, that’s more difficult to do when the total number is eight. Among those who succumbed to it are well-known SNL legends like John Belushi and Phil Hartman, with each death occurring after the comedian left the show.

Belushi joined SNL as one of the seven original cast members when it first aired in 1975. When Rolling Stone ranked all of the cast members in 2015 he was considered the best: “Nobody embodied the highs and lows of SNL like Belushi.” During his time on the show, he portrayed many famous characters including Henry Kissinger and Ludwig van Beethoven. 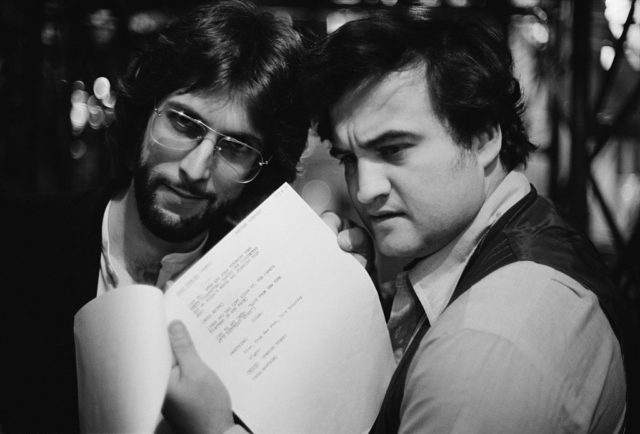 Despite his popularity, his time on the show wasn’t always easy. After a while, he began experimenting with substances, which led to him being fired and hired numerous times because of his behavior. Belushi officially left the show in 1979 to film The Blues Brothers. Only three years later he was found dead after overdosing. To make things even eerier, one of the last clips of him recorded for television features him face down, dead, in a swimming pool. This was for the show Police Squad.

Belushi died before this was released, however, so it was never aired.

Andy Kaufman might be one of the most unique performers to appear on SNL as he famously didn’t enjoy telling jokes or even being comedic in a traditional sense. Yet he consistently drew crowds at comedy clubs which caught the attention of the show’s producers, who asked him to perform during the first season. Although never an official cast member, Kaufman appeared periodically on the show until 1983 when he had the producers ask the audience if he should stay or go. 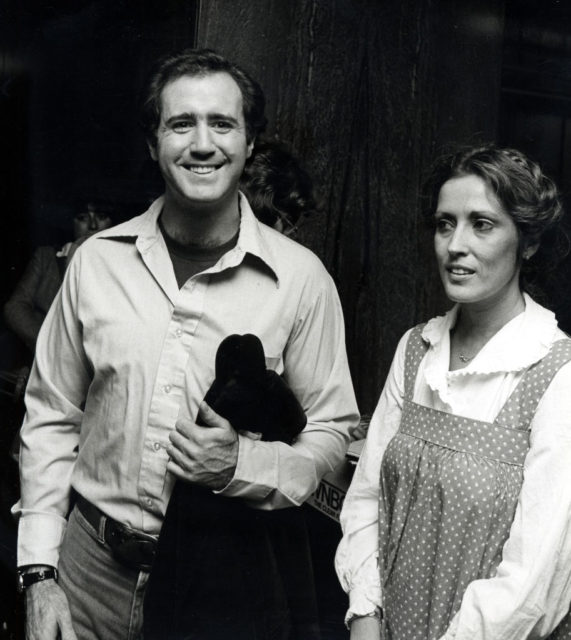 More said they should “Dump Andy” so he honored the decision and left. He created many well-known characters, including Foreign Man and Mighty Mouse, and continued to perform outside of SNL. It was only a year after he left the show that the so-called curse came for him, as he died on May 16, 1984 after being diagnosed with lung cancer. Some people believe that Kaufman faked his death but the Los Angeles County Coroner’s office released evidence to counter this.

Gilda Radner was another one of the original 1970s SNL cast members, best known for her character parodies. These included Emily Litella and Roseanne Roseannadanna. She was highly praised for her work, earning an Emmy in 1978 for her performances. Many of the characters that she did on SNL were also used in her one-woman Broadway show in 1979. 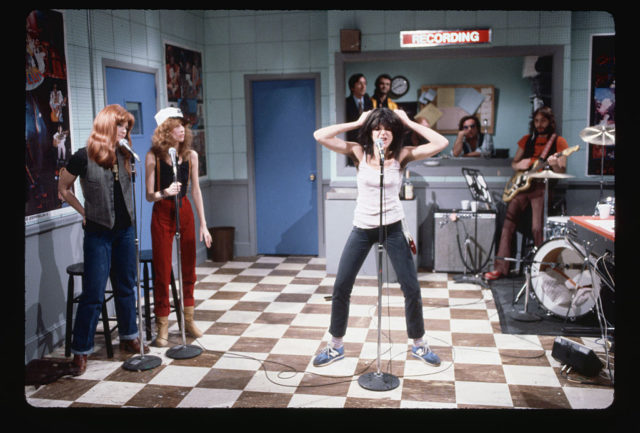 Radner stayed with SNL until 1980 when she moved on to work more heavily in film. Between 1980 and 1986 she starred in Hanky Panky, The Woman in Red, and Haunted Honeymoon. Sadly, she passed away from ovarian cancer in 1986, another of the “Not Ready for Prime Time Players” who died after leaving the show. She is considered to be a comedic legend and a role model, particularly for other female performers.

As with Gilda, Danitra Vance was one of the female cast members on SNL. She joined the show for its eleventh season in 1985 and was quickly pushed into the roles of That Black Girl and Cabrini Green Jackson. These characters, stereotypes of Black women, were part of the reason why Vance pushed back against the writers and producers and was ultimately let go by the end of 1986. 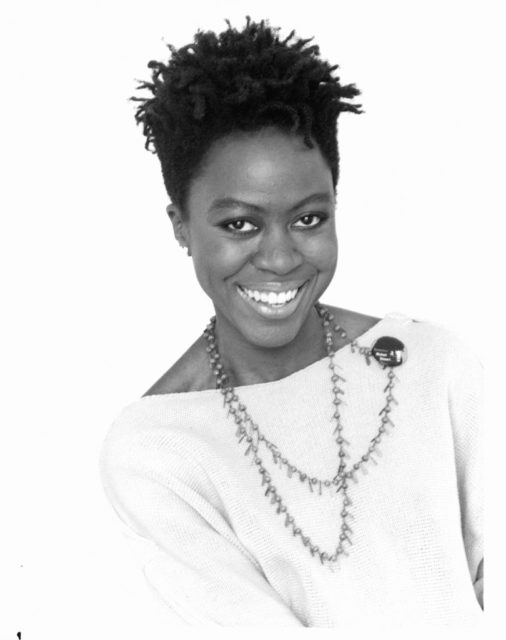 She continued to perform comedy skits and was also featured in a handful of films before being diagnosed with breast cancer in 1990. Despite fighting it off once, the illness came back and she died on August 21, 1994. Instead of a traditional funeral, she had her family throw her a “going away party” at a local amusement park.

Michael O’Donoghue had multiple roles on SNL, acting as both the head writer for the show and as one of the cast members, although the latter was not official. In fact, he was the first person to speak a line in the pilot episode. As the seasons went on, he became well known for playing the role of Mr. Mike, who told morbid bedtime stories. The humor he imparted on the show largely centered around death. 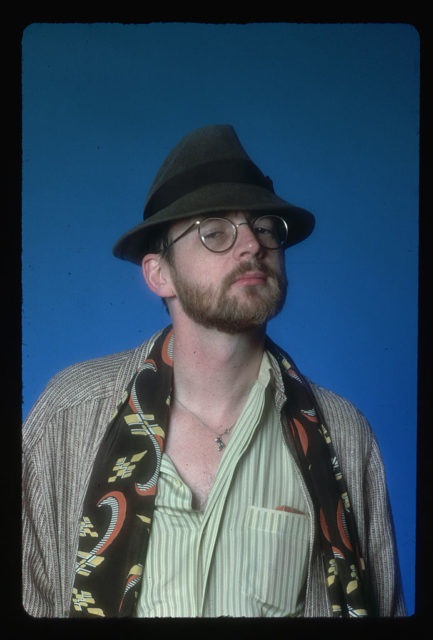 O’Donoghue worked for SNL on and off, returning to the show in 1981 when it started to do poorly. Although he eventually left to write for other projects, such as Scrooged, he stayed connected to it after marrying Cheryl Harwick, SNL‘s musical director. Unlike many of the other original cast members who are associated with the SNL curse, O’Donoghue didn’t die until many years after he left the show. The cause of death was a cerebral hemorrhage.

Chris Farley was on SNL for five seasons between 1990 and 1995 where he worked alongside icons like Chris Rock, Adam Sandler, and David Spade. Farley played many famous characters on the show, with Matt Foley arguably being the best-known of all. After he left, Farley focused his energy on working in the film industry. He was quite successful, being featured in Airheads, Black Sheep, Beverly Hills Ninja, and Almost Heroes, to name a few. 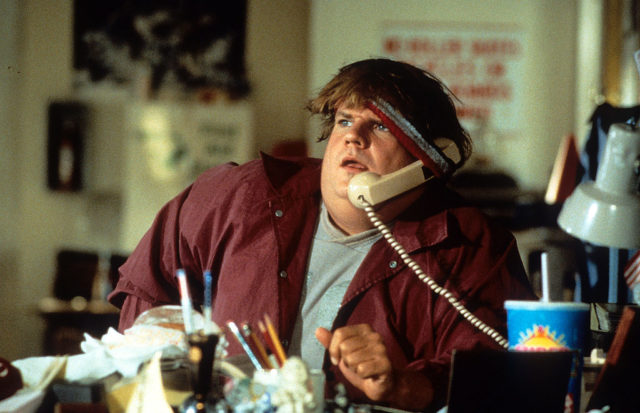 Despite his ability to get cast in Hollywood, it was always as the “fat guy,” something that his friends worried had a long-lasting impact on his mental well-being. The longer he worked in the industry the more he sank into struggling with addiction, something that he sought treatment for many times. Eventually, however, it wasn’t enough and he was found dead on December 18, 1997, after overdosing.

Phil Hartman had arguably one of the most tragic deaths of all the former SNL cast members. He joined the cast in 1986, staying for eight seasons. During this time he earned himself the nickname “Glue” for his ability to hold the cast together. Hartman even won an Emmy for his role in 1989. After leaving SNL he had an impressive career as both a voice and character actor. 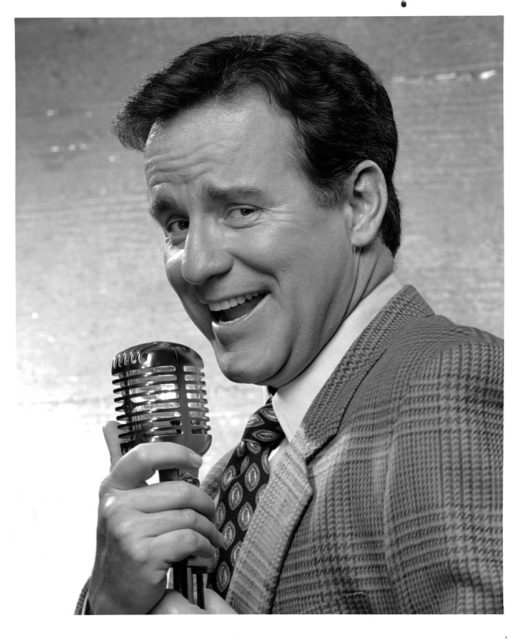 He voiced numerous characters on The Simpsons, and also acted in the films Sgt. Bilko, Jingle All the Way, and Small Soldiers. Hartman’s career was far from over, yet he was slain by his wife Brynn Omdahl on May 28, 1998. She suffered from problems with substances and, after getting into an argument that evening, killed him and then herself. Phil Hartman and Chris Farley died within six months of each other.

Charles Rocket was one of the cast members who took over from the originals when they departed SNL at the beginning of the 1980s. Most famously, he became the host of the segment Weekend Update, and performed incredible impersonations of various celebrities. Rocket’s stint on the show was short-lived, however, after he dropped an f-bomb in the middle of a skit. 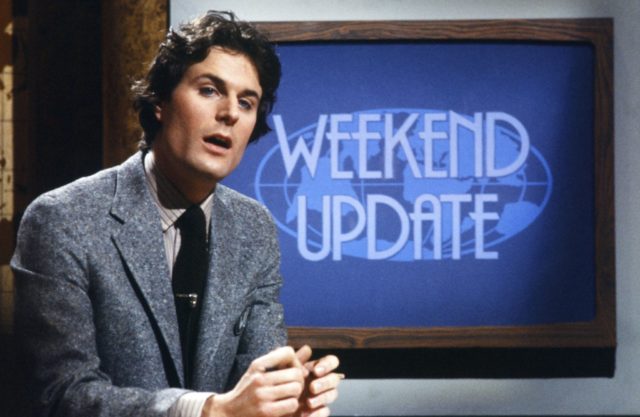 Despite this, he was able to move on with his career to work in numerous films such as Hocus Pocus, How I Got into College, Dance with Wolves, Dumb and Dumber, and Earth Girls Are Easy.

More from us: Phil Hartman’s Death: The Tragic End of an ‘SNL’ Legend

Like O’Donoghue, Rocket didn’t die until many years after leaving SNL. He was found dead in a field on his property on October 7, 2005, with the death being ruled as self-inflicted.

« Disney Does Dark: ‘Something Wicked This Way Comes’ and Other Scary, Lesser Known Stories
Neil Young Used to Jam Out with Charles Manson »