Hanging up some mistletoe and listening to festive music are traditions that many of us participate in during the holidays. But in Victorian times, people had some unusual Christmas traditions that are pretty unbelievable today. Here are some of the oddest Christmas parlor games from the Victorian era. You probably won’t want to try these at home.

The “fun” of Victorian Christmas games began when the young boys of the household were traveling home on a carriage from boarding school. It was considered sport to try and hit those outside the carriage with pea-shooters.

What says “Christmas is coming” more than a dried-vegetable-related injury? 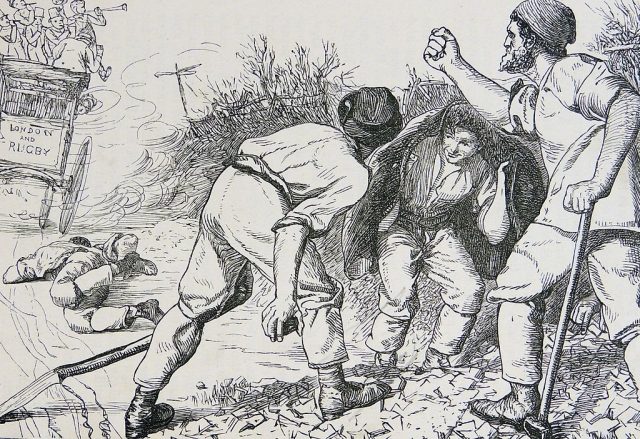 Road menders shaking their fists at the retreating coach of Rugby School boys who have bombarded them with peashooters. Illustration for 1869 edition of ‘Tom Brown’s Schooldays by Thomas Hughes. Original edition 1857. (Photo by, Universal History Archive/Universal Images Group via Getty Images)

Any list of Victorian party games will include this brandy-soaked hazard of a game. A large, shallow bowl would be filled with Christmas treats like almonds, raisins, grapes, and dried plums. Brandy was then poured over it so that the contents were swimming.

After the brandy was set alight, people had to try and snatch the fruit and nuts out of the bowl and shove them in their mouths without getting their fingers or tongues burned.

Another part of the game’s charm was, according to an article by Richard Steele in Tatler magazine: “the wantonness of the thing was to see each other look like a demon, as we burnt ourselves, and snatched out the fruit.” 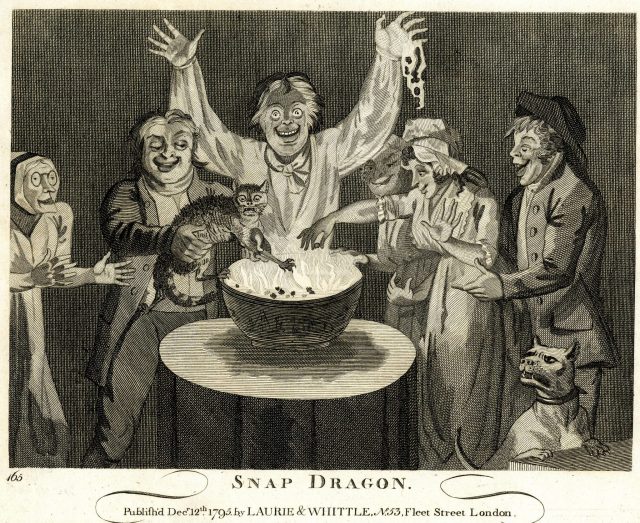 Six country people surround a flaming bowl on a small round table. A man jocosely holds a terrified cat over the bowl to force it to pull out a raisin. A man wearing a shirt or surplice stands with both arms held up, from one hand dangles a burnt rag. A mastiff snarls at the cat. 12 December 1795. Etching and stipple (Photo Credit: British Museum, Public Domain)

This dangerous game resulted in so many injuries that some started to whisper that it had been invented by those specializing in bone-setting as a way to garner more business.

One unfortunate party guest would be blindfolded and spun around, after which they had to try and tag other guests who would dodge out of the way. What made this game particularly hazardous was that some guests would deliberately move furniture or put obstacles in the way of the seeker with the intention of tripping them up.

In 1900, William L. Alden wrote of his painful experience of playing Blind Man’s Buff: “I have suffered much from Christmas games. I have played [Blind Man’s Buff] and caught the corner of a particularly hard pianoforte with my forehead.” 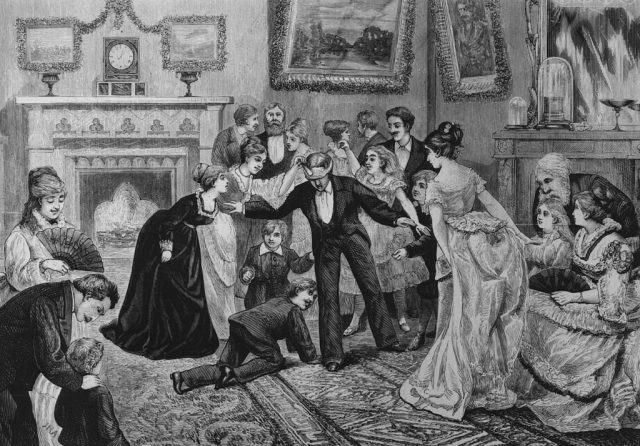 A variation on Blind Man’s Buff has everyone else in the room blindfolded except the bellman. The person holding the bell sneaks around the room and rings the bell from different places. The blindfolded guests then all have to charge towards the noise and try to catch him.

Clearly, there weren’t enough injuries with just one person being blindfolded, so they decided that everyone should be blindfolded. That’s Victorian logic and fun for you! 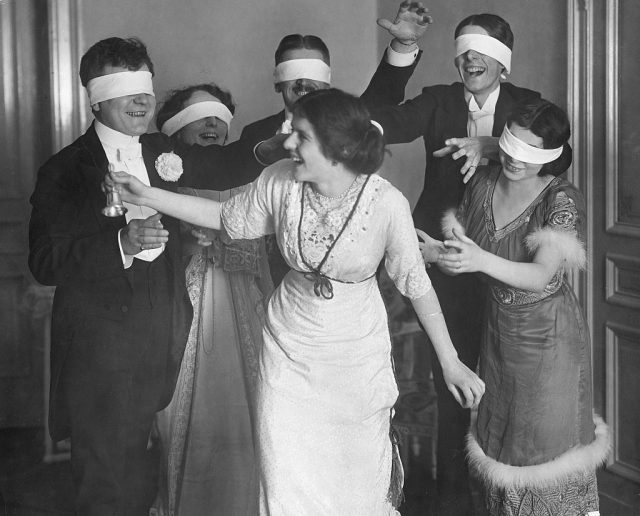 The food served at a Victorian Christmas table could be heavy on the stomach. Turkey was eaten by Victorians, but it might be boiled with celery rather than roasted. A novel way to use up any leftover turkey was to create a turkey galantine which might then be encased in aspic (clear jelly) with other offcuts and vegetables.

The Victorians also ate frumenty (also known as furmety or furmenty), a type of wheat porridge and, according to the English Heritage blog, might start off with artichoke soup followed by fish and sweetbreads. 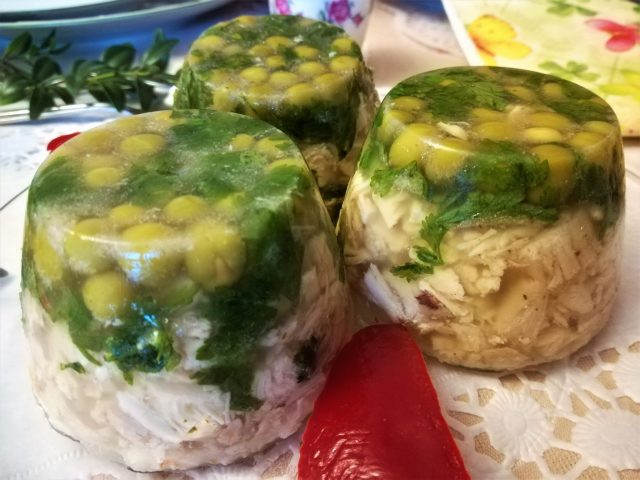 And, of course, there was always plenty to drink.

With a stomach full of all that, imagine trying to take on the Yuletide challenge of spinning around 50 times in one minute. We can all see how that is going to end.

You would think Blind Man’s Buff and the Bellman were violent enough party games that dealt in humiliation, but someone clearly didn’t think so as they invented Hot Cockles.

One person sits in a chair while another guest (the player) sits on the floor and puts their head in the other person’s lap so that they can’t see anyone else. The other party-goers come up one at a time and kick the player from behind, who has to guess who has just kicked them.

Game of Hot Cockles. Illustrations from ‘Sports and Pastimes of the People of England’ by Joseph Strutt (Photo Credit: Hulton Archive/Getty Images)

If the player gets it right, they get to swap with the person who kicked them. Sounds great fun.

Are you there, Moriarty?

This game appears to have developed out of an Italian game known as saccomazzone. However, since saccomazzone has been described as “a game that was originally played between two blindfolded peasants,” it seems that adding in some elements from Sherlock Holmes made it more palatable as an English parlor game.

Two blindfolded players would lie on their stomachs, arms stretched out and holding hands. In their other hand, they’d have a cushion or, if they were feeling particularly vindictive, a rolled-up newspaper. 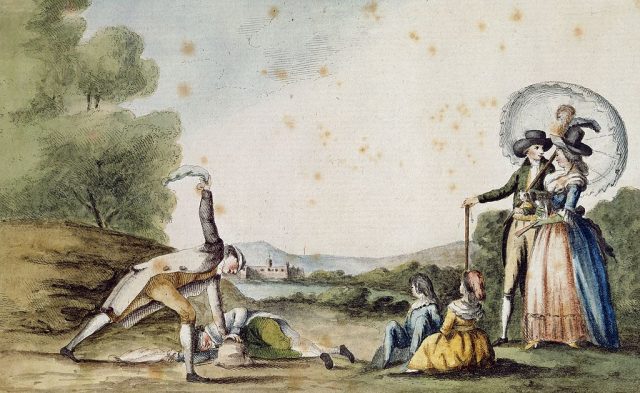 In some versions, to make it harder, they would simply lie on their fronts, facing each other, but without holding hands.

That really did amuse the Victorians for hours.

Taking the parlor games outside, some people decided that wassailing needed a bit more of an edge to it.

Wassailing was a common practice in many parts of England. People would gather in apple orchards and pour cider over the roots of apple trees in the hope of a good harvest. 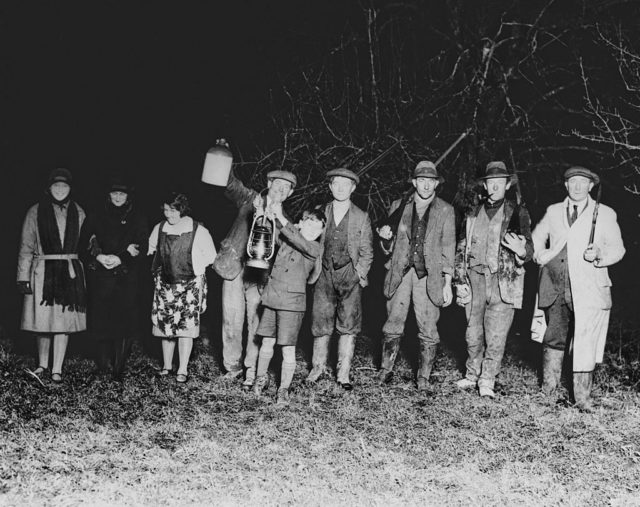 Wassailing in the orchards in Somerset, UK. The Orchard-Visiting Wassail is a tradition in the west of England, intended to awaken the cider apple trees and ensure a good harvest. (Photo Credit: Fox Photos/Hulton Archive/Getty Images)

More from us: Why Hermits Used To Roam Lavish Victorian Gardens

However, in an effort to ward off evil spirits, some might use rifles to shoot into the branches. With the participants drinking as much cider as the trees, this could be a pastime fraught with the possibility of injury.