Mel Brooks’ Star Wars spoof Spaceballs turns 35 this year. It’s one of those movies whose reputation grows with each passing year, though there’s more to it than a simple take-off of George Lucas’s mega-franchise.

Inspiration for Spaceballs reportedly struck when Mel Brooks shouted something at a studio exec: “Planet Moron!” This was in response to him being asked what he had in the pipeline.

It was just something Brooks came out with – whether he was throwing an insult isn’t clear but anyway, an idea was sparked. He would make a movie called Planet Moron! This was dropped after the release of Morons From Outer Space (1985). 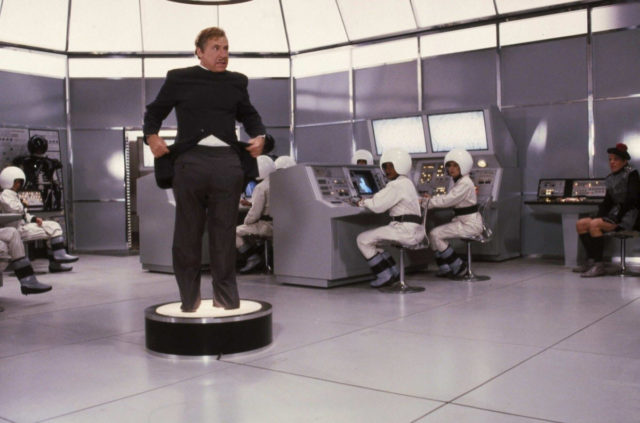 Where did the title people know and love come from? As described by The Laugh Button, Brooks and one of his co-writers Ronny Graham decided on Space something… but what? “As they were doing it, Brooks spilled a drink and shouted ‘Balls!’ and Ronnie Graham shouted, ‘Spaceballs!’” The legend was born.

A savvy Brooks knew he’d need permission from George Lucas before spoofing his pride and joy. Lucas turned out to be game for a laugh but insisted that no Spaceballs merchandise be produced.

With Star Wars riding the crest of a wave from toy sales, it figured that Brooks shouldn’t be given a piece of the action. Still, the mirth-meister had some fun with Spaceballs’ famous merchandising scenes, such as Dark Helmet (Rick Moranis) playing with fully poseable (yet fictional) products.

Lucas not only appreciated the Mel Brooks treatment, he praised him on a solid story. The Laugh Button writes about his view that Spaceballs “would have succeeded as a great adventure film” in its own right. 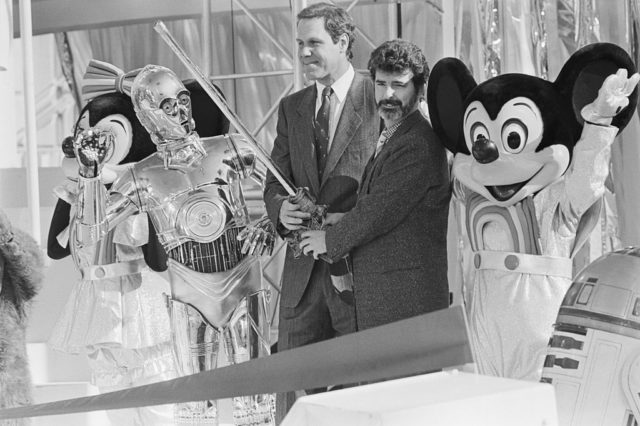 Michael Eisner, chairman of Disney, and film director George Lucas take part in a ribbon cutting ceremony for the new Star Tours ride in Disneyland. They are joined by Mickey and Minnie Mouse, and C3PO and R2D2, the robots from Star Wars. 1987. (Photo Credit: Bettmann / Contributor)

The hero of Spaceballs is Lone Starr, a rugged space mercenary who mixes the grit of Han Solo with the magic of Luke Skywalker. Brooks wanted Tom Cruise for the role. Or Tom Hanks.

Neither were interested. Instead, he cast a relatively young actor, Bill Pullman, who’d go on to the likes of Independence Day and The Sinner. As mentioned by The Hollywood Reporter, Brooks was in the audience for a staging of Barabbas in LA when he spotted the future star.

Daphne Zuniga took the role of Princess Vespa. She reportedly took some convincing, not being a fan of Brooks’ output. However, his artistic approach surprised her and she went on to play arguably her most famous role. 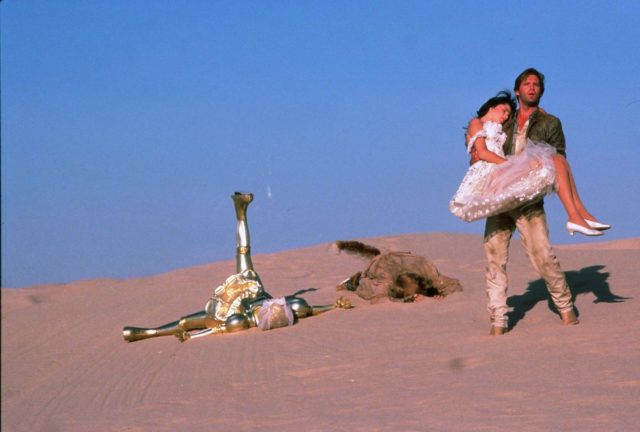 She also got a surprise when meeting Star Wars counterpart Carrie Fisher at her show Wishful Drinking. Talking to the Tampa Bay Times in 2017, Zuniga found herself recognized by Fisher, who “just said: ‘Hey. You’re me.’”

The Wild and Crazy Guy could have teamed with Mel Brooks as Col Sandurz, though George Wyner became Dark Helmet’s right-hand man in the end. As for why Martin didn’t play it, we don’t know. Maybe he felt a bit chicken.

Brooks may not have attracted an A-Lister like Harrison Ford. Yet Han Solo did pop up in Spaceballs, albeit from a distance. The Laugh Button points out the unmistakable sight of the Millennium Falcon parked at the Space Diner. 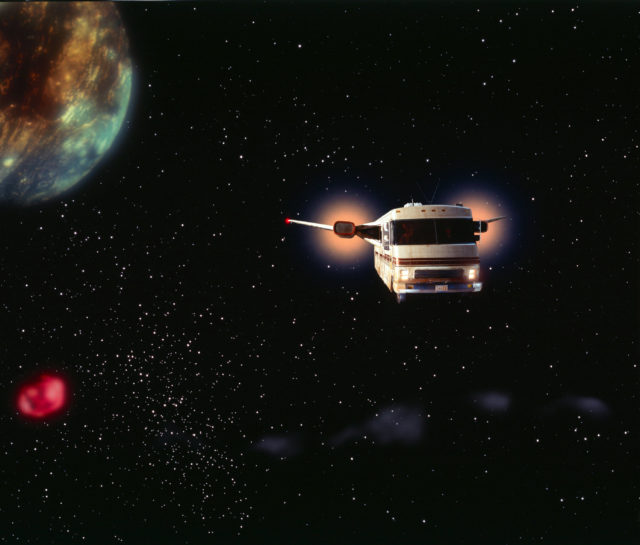 The Eagle 5, a parody of the Millennium Falcon (Photo Credit: Metro-Goldwyn-Mayer, MovieStillsDB)

Green screens are now standard on many movie shoots – George Lucas famously used them extensively for his prequel trilogy. Back in the late 1980s however, the practice was still a little… well, green.

Too green for some. Mental Floss writes, “At the time, the process was still relatively new, and the production had a suspicion that the environment might be damaging to a person’s eyesight.”

It isn’t worth potentially risking your optic nerve over a blanket of stars, so the actors took precautions when the cameras weren’t rolling. Bill Pullman told The Hollywood Reporter in 2017: “they would call cut and everyone would put on their sunglasses.”

One of the biggest names onscreen, together with Rick Moranis, was John Candy (Joan Rivers played straight-talking robot Dot Matrix but in voice only.) He portrayed Barf, the Chewbacca-esque “Mog”… or half-man, half-dog.

Equipped with a pair of moving ears and a wagging tail, he was one of the movie’s most watchable characters. He was also the most electrifying. As in literally. Candy reportedly had a 40-lb battery attached to him that juiced up his animal parts.

Barf was supposed to look like an actual dog

If you’re thinking the make-up for Candy’s character looks a little basic, then you’d be right. Initially, he was going to have a dog mask but Mel Brooks wanted audiences to see his star’s face. 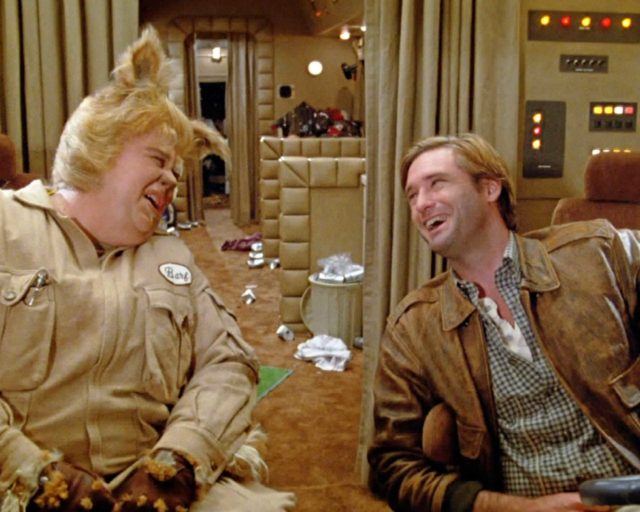 Stine must have had fun bringing Brooks’ space saga to the page. He added his own details, such as a reference to Sir Alec Guinness (Obi Wan).

Is Spaceballs Mel Brooks’ greatest film? Many would highlight Blazing Saddles or Young Frankenstein as his stand-out work. When it comes to his bank balance, on the other hand, the adventures of Lone Starr and his crew can’t be beat.

Brooks spoke to Entertainment Weekly in 2012, revealing he didn’t need to worry about an expensive night out, thanks to his Star Wars homage. “I say, ‘My God, they want $90 for this wine!’ Then something in me says, ‘The hell with it — Spaceballs will cover it.’” 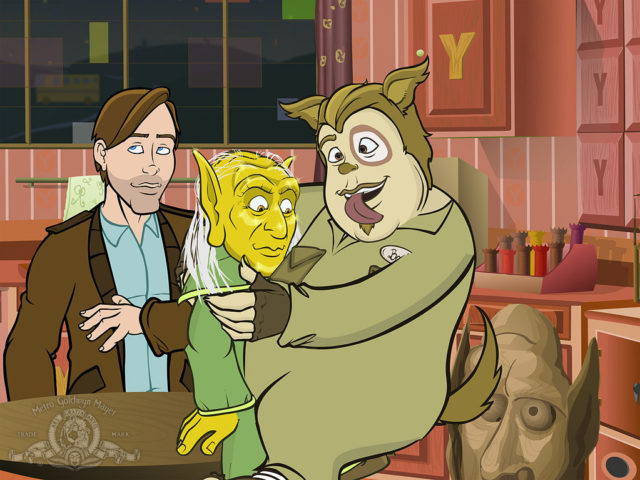 He went on to make a Spaceballs animated series. And talk persists of a follow-up, which may or may not be titled Spaceballs II: The Search for More Money.

Speaking of hot property, a throwaway merchandise gag about Spaceballs-branded flame throwers came to pass in 2018. The Boring Company released a limited range of “Not-A-Flamethrower”s.

Meanwhile, Tesla founder and real-life space explorer Elon Musk used “Ludicrous Speed” and others as descriptions on his vehicles. 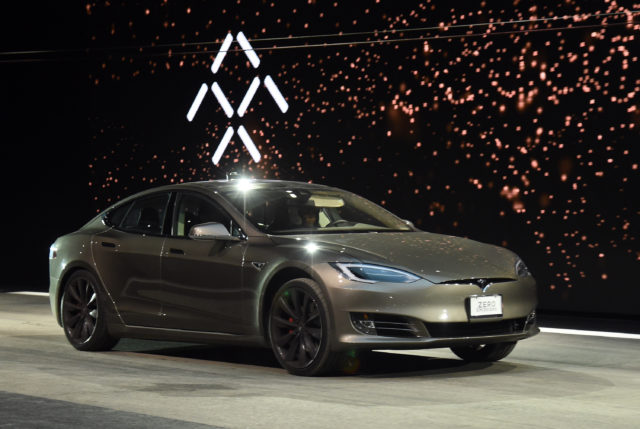 The Space Diner is where we see an unexpected tribute to a very different sci-fi classic: Alien. John Hurt returned to play another unfortunate star traveler with the ultimate case of indigestion. He’d previously worked with Brooks on an unlikely project, The Elephant Man, directed by David Lynch.

Emerging from Hurt’s body in considerably less gory fashion, the alien baby proceeds to perform a song and dance number. But did you know this is in itself an homage? The budding xenomorph picks up his hat and cane to imitate Michigan J Frog, a mascot for the Warner Bros. studio.

More from us: Blazing Saddles! 5 Hilarious Facts About this Legendary Comedy

The Return of Dark Helmet

Rick Moranis may not be seen much these days but he did choose to voice Dark Helmet once more, this time for the sitcom The Goldbergs. The show has a habit of bringing back eighties icons such as Freddy Krueger, so it was only right that the iconic Helmet lived – and, more importantly, breathed – again onscreen. 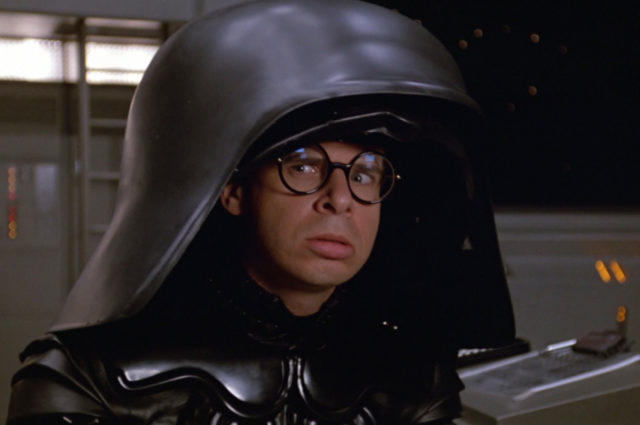