The Unconventional Life of Princess Margaret, Countess of Snowdon

The Royal Family has always had controversial members. Long before Princess Diana defied royal tradition and Prince Harry went through his wild party years, another Royal Family member captured the world’s attention. Queen Elizabeth’s younger sister, Princess Margaret, Countess of Snowdon, was arguably one of the most popular royals of all time. Throughout her life, Princess Margaret made worldwide headlines for her scandalous love affairs, her party-girl reputation, and her strong personality. 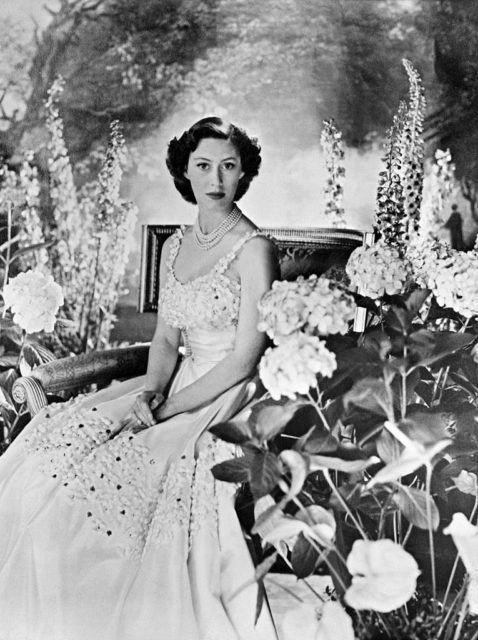 Princess Margaret’s full name was Princess Margaret Rose Windsor, Countess of Snowdon. She was born on August 21, 1930 at Glamis Castle in Scotland, making her the first royal child to be born in Scotland in more than 300 years. She was the second daughter of King George VI and Queen Elizabeth (later known as “The Queen Mother”). Her older sister was Queen Elizabeth II. Interestingly, Princess Margaret’s birth registration was delayed for several days to “avoid her being number 13 in the parish register.”

Princess Margaret’s life drastically changed in 1936 when her uncle, King Edward VIII, abdicated the throne to marry Wallis Simpson. After her father ascended the throne as King George VI, her older sister Elizabeth became the heir presumptive. Although Princess Margaret was second in line for the throne, she often found her secondary role in the royal family challenging to accept. 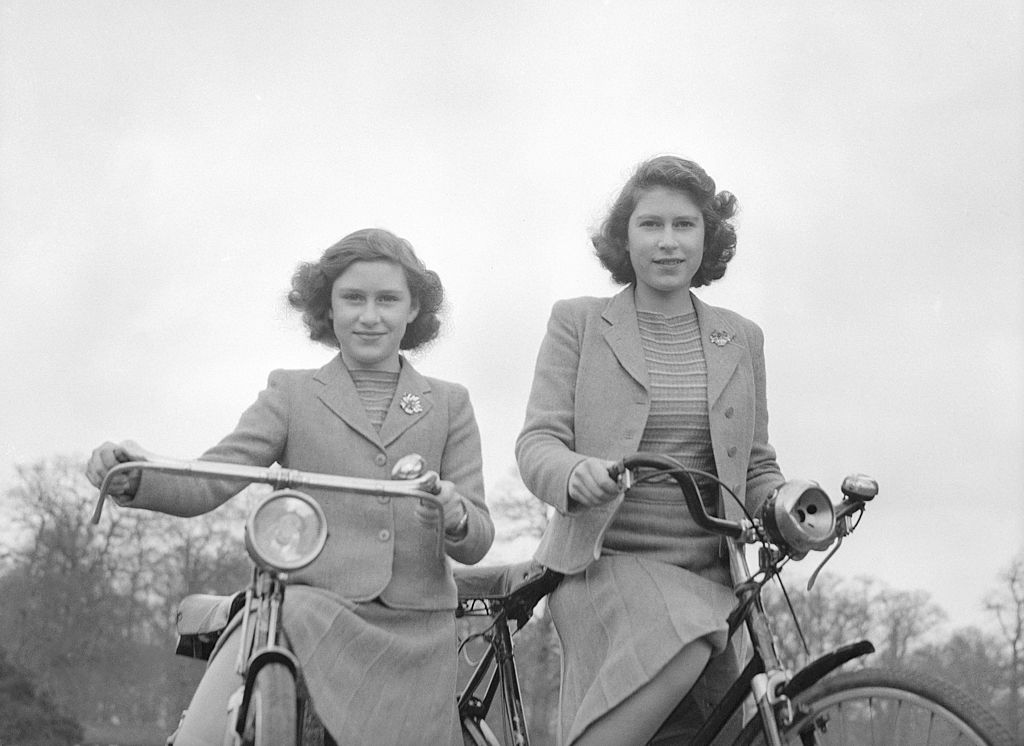 After their father became King, Princess Margaret and Princess Elizabeth were moved to Buckingham Palace. However, during the Second World War, the royal sisters were moved to Windsor Castle, just outside London. During the Second World War, Princess Margaret was not expected to undertake any public or official duties. However, she managed to stay busy at Windsor Castle by putting on pantomimes at Christmas, meeting important figures including General Eisenhower and Eleanor Roosevelt, and entertaining young guards’ officers stationed at the Castle. 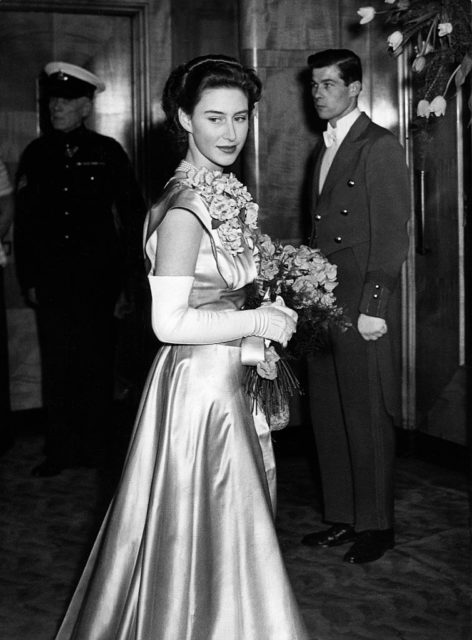 The press began taking an interest in Princess Margaret’s social life in the late 1940s. By the 1950s, Princess Margaret had solidified herself as one of the world’s most eligible socialites. She was physically beautiful, with bright blue eyes, and began socializing in high society among celebrities and young aristocrats. According to Princess Margaret’s authorized biographer, Christopher Warwick, “there were only two women that the international press were interested in, and that was Princess Margaret and Elizabeth Taylor.”

The Margaret Set was a group of Princess Margaret’s close friends during the 1950s. The group was almost entirely male, and engagement or romance rumors between Princess Margaret and numerous male members of her friend group were often reported. Princess Margaret was rumored to have had alleged romances with more than 30 young bachelors who were part of the famed Margaret Set. 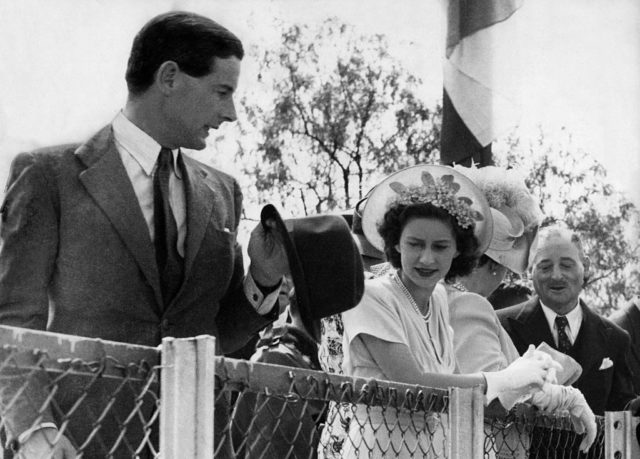 Princess Margaret is perhaps best known for her many failed love affairs and romantic scandals that infiltrated their way into the worldwide press. Princess Margaret’s most famous love affair involved a much older man named Peter Townsend. 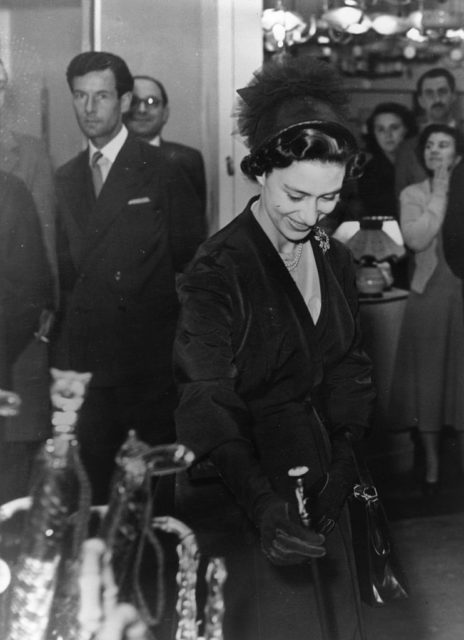 The couple’s decision to marry sparked a battle between the government and the British public. The Church of England had strict rules about divorce (that have since been overturned), making it difficult for Queen Elizabeth II, who was head of the Church of England, to give Princess Margaret permission to marry Peter Townsend. Princess Margaret also needed Parliament’s approval to marry Townsend. It didn’t help that Prime Minister Winston Churchill made it clear that his cabinet would not approve of the marriage.

Marriage to and divorce from Anthony Armstrong-Jones 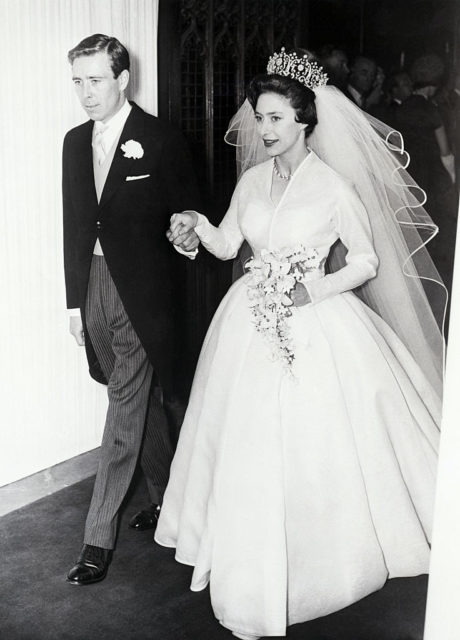 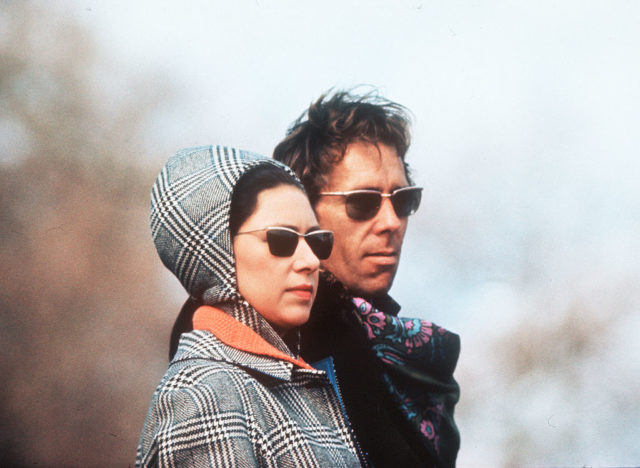 Queen Elizabeth II never made Princess Margaret a Duchess even though members of the Royal Family typically receive a dukedom when they tie the knot. Technically, a Countess rank is lower than a Duchess rank. 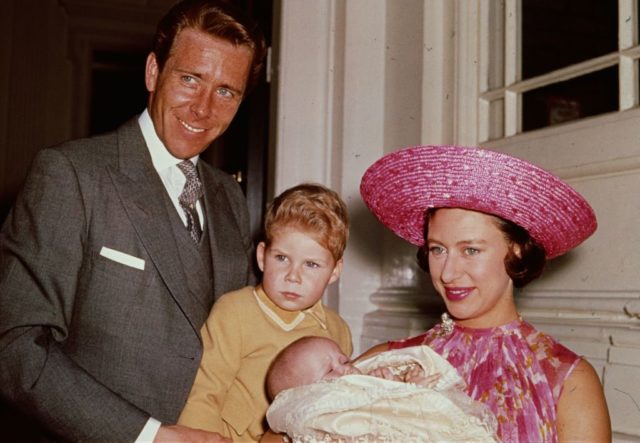 Princess Margaret with Lord Snowdon at Kensington Palace with their son David and their daughter Sarah, circa 1964. (Photo Credit: Fox Photos/ Getty Images)

The Earl and Countess of Snowdon had two children together. Their son, David, was born on November 3, 1961, and their daughter, Sarah, was born on May 1, 1964. After Sarah’s birth, signs began to show that the marriage was falling apart. Both Princess Margaret and Anthony Armstrong-Jones had extramarital affairs and grew apart.

In 1976, Princess Margaret and Anthony Armstrong-Jones separated. Two years later, in 1978, it was announced that the couple was divorcing. Kennington Palace announced, “Her Royal Highness The Princess Margaret, Countess of Snowdon, and the Earl of Snowdon, after two years of separation, have agreed that their marriage should be formally ended.” This was the first royal divorce since Henry VIII divorced Anne of Cleves in 1540.

Did she have an affair with a British gangster? 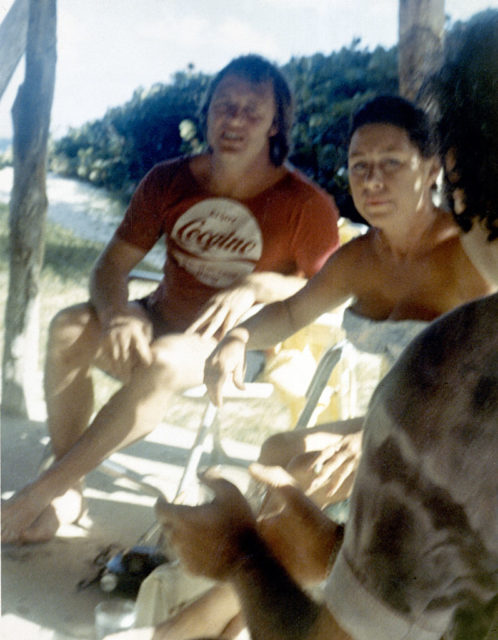 Bindon’s t-shirt has a Coca Cola type logo and bears the caption Enjoy Cocaine . (Photo by Mirrorpix/Mirrorpix via Getty Images)

Throughout her life, Princess Margaret had many alleged affairs. One of them, however, was much more scandalous than the rest. Photos from the 1970s show the Princess at her vacation home in Mustique alongside John Bindon, a high-profile British gangster and actor. Although he was her guest there for three weeks, many people close to Margaret said that nothing romantic happened between the two of them.

Bindon’s girlfriend at the time, and another one of Margaret’s guests during this period, said the opposite. According to her, the two were involved and Margaret would even sneak him into Kensington Palace as they carried on their relationship when they got back to England. In later years, Bindon talked about his time with Margaret, saying “My accent and Cockney phrases foxed her sometimes. We talked about acting, films and showbiz. I think she liked me because I nattered away quite happily.” 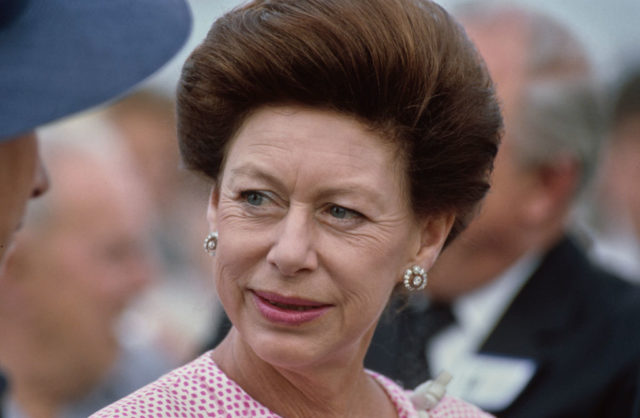 She started smoking cigarettes when she was a teenager, but it was only after her father’s death that her smoking became a serious addiction. Famously, Princess Margaret smoked up to 60 Chesterfield cigarettes a day at one point. During her marriage, she began chain-smoking in bed. Her breakfast consisted of vodka, and her lunches revolved around glasses of wine. 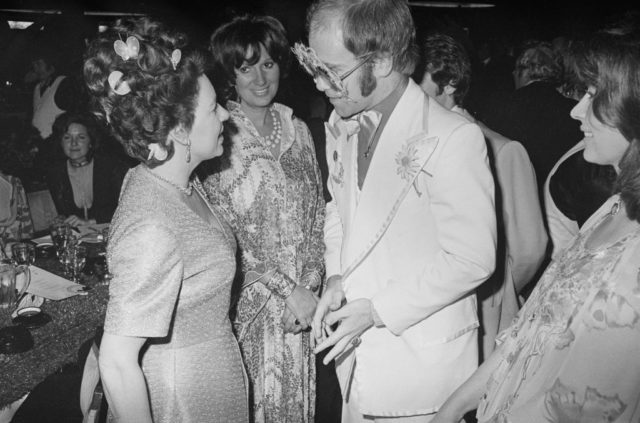 Princess Margaret finally gave up smoking cigarettes for good in 1993 after she was hospitalized with pneumonia. She suffered her first of many strokes in 1998 while vacationing on the Caribbean island Mustique. One year later, Princess Margaret sustained long-lasting injuries after suffering badly scalded feet while getting into a bath. Though she recovered from this injury, Princess Margaret was typically seen in a wheelchair during any public appearances from that point forward. 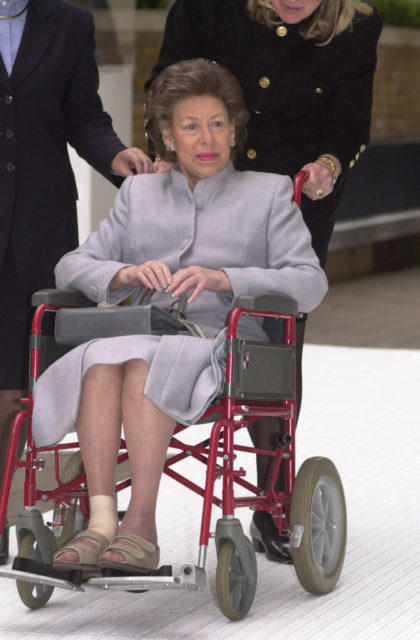 In April 2001, Princess Margaret partially lost her vision. This loss of eyesight was thought to have been a lasting side effect from the number of strokes she had suffered. 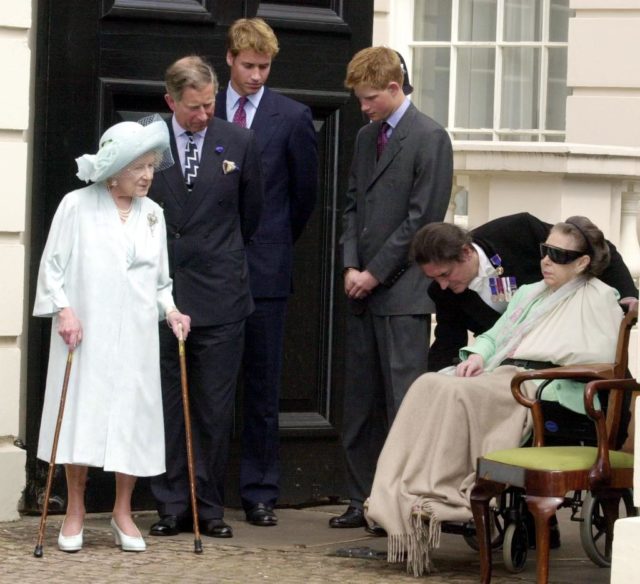 Her staff was unable to wake her the next day, but both the Royal Family and Princess Margaret herself denied ever being suicidal. Princess Margaret later explained, “I was so exhausted because of everything that all I wanted to do was sleep… and I did, right through to the following afternoon.” In the 1970s, Princess Margaret was treated for depression by psychiatrist Mark Collins from the Priory Clinic. Collins is known for treating celebrities and helping them with mental health issues.

Princess Margaret passed away on February 9, 2002, at King Edward VII’s Hospital in London at the age of 71. She died in her sleep after suffering another stroke.

Portrayal in The Crown 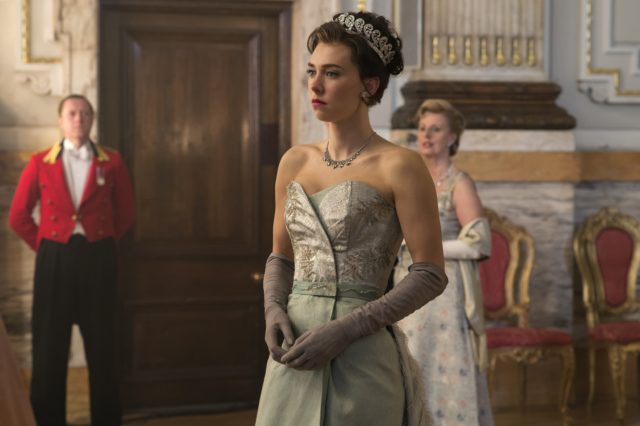 Princess Margaret has been portrayed in a number of different television shows and movies. Most recently was Princess Margaret’s portrayal on the hit Netflix series, The Crown.

« New Species of Spinosaurid Dinosaur Unearthed in Portugal
What Is Fat Tuesday and Why Is It the Best Day of the Year? »