Mel Brooks produced The Elephant Man? It’s not a gag. The self-proclaimed film fart pioneer brought the surreal and singular David Lynch on board in the first place. On top of this, they were taking a trip back in time to Victorian London (for the movie you understand, things didn’t get that crazy).

How did these two seemingly different men join forces to shoot the true-life story of Joseph Merrick? Allow us to clear a path through the fog…

Birth of The Elephant Man onscreen

It began with a babysitter. Jonathan Sanger, who went on to produce The Elephant Man, was told about a screenplay co-written by his childcare provider’s boyfriend, Christopher De Vore.

Telling the story of noted Victorian figure Merrick and partly based on the writings of surgeon Frederick Treves, this fictionalized version grabbed Sanger’s attention. He wanted to show it to someone – his employer Mel Brooks. Sanger worked as assistant director on the mirth-inducing maverick’s Hitchcock spoof High Anxiety (1977).

Joseph – called John in the movie – Merrick lived between 1862-90. His physical appearance is thought to be due to Proteus syndrome (where bones, skin and tissue grow too much), though ultimately a definitive cause wasn’t established. 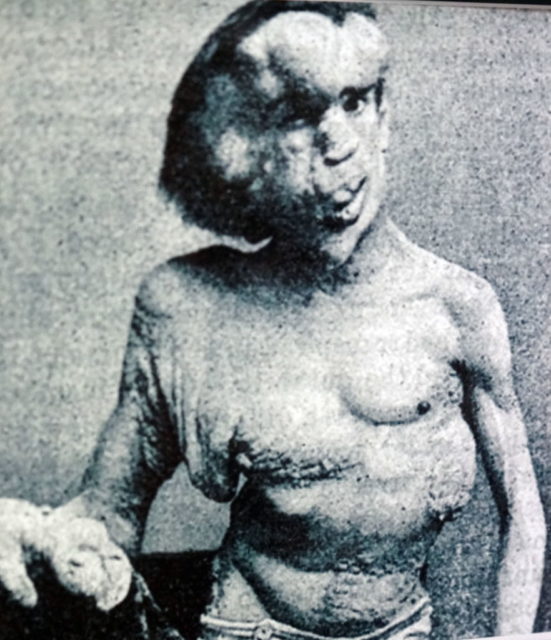 There’d been a play about the case by Bernard Pomerance, which at one point starred David Bowie. De Vore and Eric Bergren’s take was different, however, it would also require an otherwordly force to make it something special. Enter David Lynch.

As described by Film School Rejects and others, Mel Brooks wanted to produce The Elephant Man. But who would direct it? Visual supremo Terence Malick (Badlands) was a possibility, though rejected company BrooksFilm’s offer. Then Lynch was mentioned.

Great, thought Brooks, though what has he directed previously? Well, there was Eraserhead, released at the same time as High Anxiety. Mind you, that movie had a tendency to weird people out/knock their socks off. Even Lynch didn’t think it was a good idea for Brooks to watch it. “I thought this would be the end of everything,” he said during an interview in 2007. 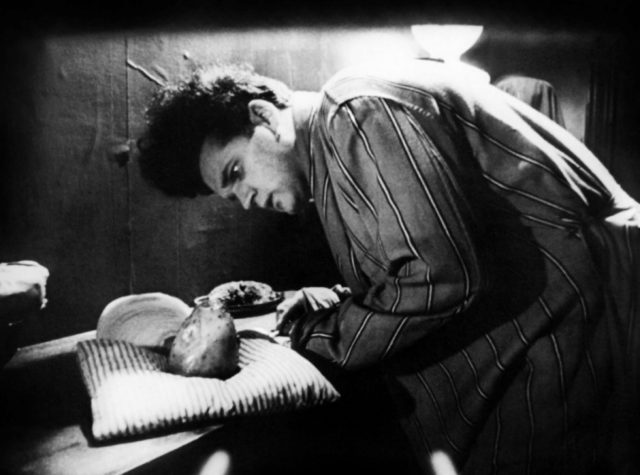 Amazingly, Brooks loved Eraserhead. He famously emerged from the screening to grab Lynch and declare: “You’re a madman, I love you!’” Speaking in 1997, Brooks said he expected the director to resemble a Picasso painting with “two eyes on one side of his nose.” Instead, he was pleasantly surprised to see someone who looked like Charles Lindbergh. Brooks would also describe Lynch as Jimmy Stewart, only from another planet.

A meeting at a Bob’s Big Boy restaurant sealed the deal. Lynch liked the burgers in there. In fact, liked is an understatement. Shooting The Elephant Man in the UK, he reportedly complained that he couldn’t find an outlet to feed his beefy fixation.

Brooks was reassured by Lynch’s outlook on Merrick’s story, telling The Guardian he “made sense” for a surrealist and “was very savvy” concerning what he’d do.

What really tied the pair together? The idea that both were seen as on the fringes. Brooks read about Merrick and drew parallels with his experiences as a Jewish person and anti-semitic prejudice. In Lynch, he recognized a fellow outcast of sorts.

He mentioned, “it was the outsider aspect” of the film “that appealed to him. And that’s where I think we met, mentally.” Lynch later worked on the script with De Vore and Bergren.

It may have been a British tale, yet Lynch didn’t want to stick to authenticity and roll cameras in London. As revealed on IMDB, Brooks brought in friend and colleague Gene Wilder. He’d made The Adventure of Sherlock Holmes’ Smarter Brother (1975) over there and helped convince the auteur to go abroad.

The late John Hurt was cast as Merrick and Anthony Hopkins played Frederick Treves. Hurt and Hopkins admired Lynch’s talent, but reportedly struggled through the production.

The director wanted to handle make-up duties himself and place Hurt in a full-body suit. This self-sufficient approach proved impractical – out went the suit and Christopher Tucker came in to create prosthetics… some 15 layers, according to Dangerous Minds! Hours of application were required each day. 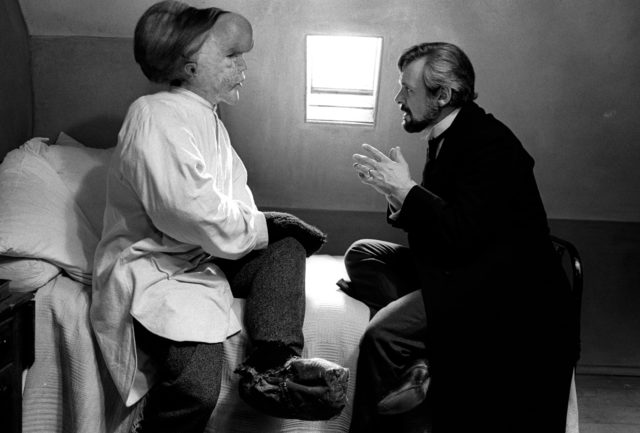 Hopkins, meanwhile, found Lynch’s artistic directing style frustrating. Seems they didn’t get on too well, though Hopkins wrote and apologized to the director years later.

Mel Brooks faced criticism from Paramount over Lynch’s creative decisions. The Elephant Man would be a black and white picture with art-house sensibilities. Probably not what they had in mind, putting it mildly.

Film School Rejects mentions Brooks’ classic response to the studio over their feedback: “Do not misconstrue this as our soliciting the input of raging primitives.”

He ensured he was all over any doubting of David Lynch. Actually, Brooks was so selfless he went as far as removing his name from the credits so people wouldn’t be distracted thinking: “It’s the Blazing Saddles guy!” 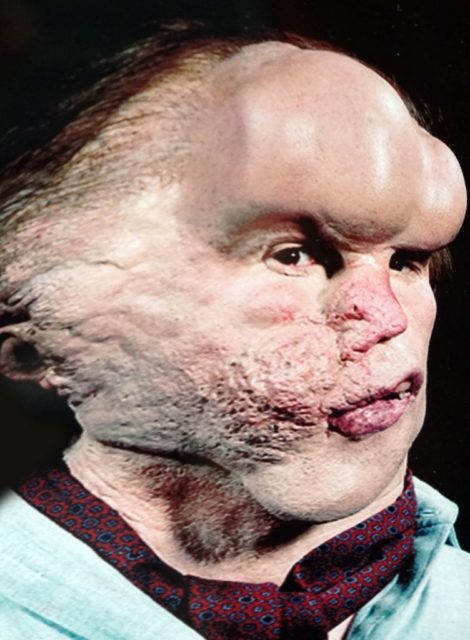 The Bernard Pomerance play received its own movie treatment in 1982, with Glenn Close among the cast. David Bowie, who’d starred in the stage production, went on to have a long association with Lynch.

From shadows and fog to a lifetime friendship

Over four decades later, Mel Brooks and David Lynch speak of one another with fondness. In his 2021 autobiography All About Me!, Brooks wrote about the time they were reunited onstage in 2013.

His old pal had a surprise – back then, Brooks had purchased a coat to keep Lynch warm in the notorious London cold. The director brought the coat out to show Brooks, having kept it all these years. “I can’t tell you how touched I was at the sight of that coat,” Brooks said. 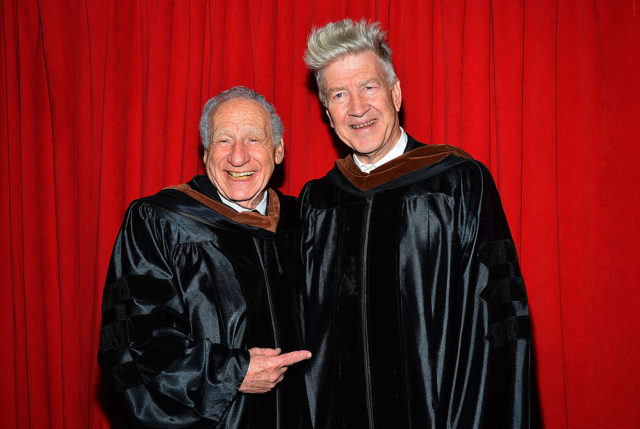 The Elephant Man moved many viewers and placed Joseph Merrick in popular culture. It also paved the way for makeup effects to be properly recognized by the Academy Awards.

More from us: Facts About ‘Spaceballs’ as Mel Brooks Classic Turns 35

Plus, this wasn’t Mel Brooks’ only foray into unexpected movie territory. Several years on from working with Lynch, he produced David Cronenberg’s gory remake of the horror classic The Fly (1986). Talk about generating a buzz.

« 10 Bizarre Ancient Roman Laws and Customs That Were Considered Normal
German Indiana Jones? Meet the Man Behind the Country’s Hunt for the Holy Grail »